+1 point
Thank you for your contribution! You can also upload a video entry related to this topic through the link below: https://encyclopedia.pub/user/video_add?id=27341
Check Note
2000/2000
The Role of Ketogenic Diets in DNA Methylation

Ketogenic diets (KD) are dietary strategies low in carbohydrates, normal in protein, and high, normal, or reduced in fat with or without (Very Low-Calories Ketogenic Diet, VLCKD) a reduced caloric intake. KDs have been shown to be useful in the treatment of obesity, metabolic diseases and related disorders, neurological diseases, and various pathological conditions such as cancer, nonalcoholic liver disease, and chronic pain. The term epigenetics refers to heritable changes in gene expression without changes in DNA sequence. Major epigenetic mechanisms include DNA methylation, histone modifications, microRNA, and chromatin remodeling.

Ketogenic diets (KD) are a group of diets characterized by low carbohydrate, normal protein, and high fat content. This combination of macronutrients aims to force the body to break down fat instead of glucose to synthesize adenosine triphosphate, inducing ketosis [1] and mimicking the metabolic state of starvation or fasting. In general, urinary ketone levels can be used as an indicator of dietary adherence [2]. Several variations of the KD have been proposed [3]. The best studied is a KD with a 4:1 or 3:1 ratio of dietary fat to combined dietary protein and carbohydrate, sometimes referred to as a “classic” KD [3].
The earliest evidence showing the role of a ketogenic diet dates back to the 1920s, when it was discovered that by eliminating carbohydrates from the diet, the metabolic effects of fasting could be mimicked. KD results in a marked increase in circulating concentrations of β-hydroxybutyrate (β-HB) [4]. β-HB is the main representative of ketone bodies in animal cells, and its baseline concentrations in serum are in the micromolar range in humans. During fasting or after carbohydrate-free KD, serum concentrations of β-HB can rise well above 2 mM [5].
This dietary approach was first used in pediatrics to treat drug-resistant epilepsies [6]. Later, the studies of Cahill and his group were critical in clarifying the physiology of starvation and the protein-sparing effects of ketosis [7][8]. The authors demonstrated that ketones reduce muscle protein breakdown during starvation by providing alternative fuel to the brain, thereby reducing the need for gluconeogenesis. In addition, the decrease in insulin levels caused by caloric deprivation and carbohydrate restriction allows the production of glucose through glycogenolysis and gluconeogenesis to fuel the brain. In addition, free fatty acids are released from adipose tissue and used as a substrate for the liver production of ketone bodies (acetoacetate, beta-hydroxybutyrate, and acetone). These molecules gradually become an alternative source of energy for the body and brain [8][9]. Finally, the metabolic changes induced by fasting, due to the anorexic properties of ketone bodies, allow a reduction in the sensation of hunger and reduce protein breakdown in the body, allowing the organism to survive [10]. This model has been defined as “Protein Sparing Modified Fast” (PSMF) and consists of a highly hypocaloric diet, based mainly on an adequate intake of proteins and essential fatty acids, which allows rapid weight loss while maintaining muscle mass [11]. This type of treatment may even be therapeutic in certain pathological conditions [12].
The Very Low-Calorie Ketogenic Diet (VLCKD) is a nutritional intervention characterized by a very low carbohydrate content (equivalent to 5–10% of the total daily caloric intake or 30–50 g of carbohydrate per day [13][14]), a low fat content, and a high-biological-value protein content of 0.8 to 1.2 g/kg of ideal body weight [15]. VLCKD promotes metabolic changes and optimizes energy metabolism by simulating the effects of fasting, with a drastic restriction of the daily carbohydrate intake and a relative proportional increase of fats and proteins for a total caloric intake of about 800 kcal/day [16][17].
In the past century, the use of diets with very severe caloric restriction was not uncommon. In some cases, the treatment consisted in the administration of water-only diets and total fasting (with or without vitamin supplements, depending on the duration of the diet) [10]. The first report on the effects of prolonged fasting was published by Benedict in 1915 [18], followed by Keys in 1940 [19]. Both authors found that fasting resulted in weight loss in normal-weight individuals, mainly at the expense of lean mass [18][19]. In subsequent years, treatment of obesity by complete fasting was introduced [20][21]. In obese individuals, the weight loss induced by fasting was less relevant in terms of fat-free mass consumption due to increased fat reserves. Consequently, in these individuals, the duration of fasting could be extended from two months (in lean individuals) [22] to almost one year [23]. Complete [23][24] or intermittent [25][26] fasting was then more commonly used to treat obesity. Although fasting diets were generally well tolerated, they were associated with several adverse effects, including malnutrition, rapid weight loss, heart disease, hypotension, and hypoglycemia [10][27][28].
Nowadays, KD and VLCKD are considered valid therapeutic options in various clinical situations, including severe obesity, obesity in the presence of concomitant diseases, hepatic steatosis, polycystic ovary syndrome, drug-resistant epilepsy, migraine, and in the preoperative management of bariatric surgery [16][29]. In recent years, increasing scientific evidence has favored the rediscovery of KD and VLCKD, and these approaches have been proposed as attractive nutritional strategies for the treatment of obesity in individuals who have already tried unsuccessfully to lose weight with more balanced diets [16]. In addition, KD and VLCKD have been shown to have beneficial effects on body composition, the metabolic profile, and the expression of genes related to inflammation and oxidative stress [16][29][30][31].
Although KD and VLCKD are now widely used to prevent and treat various clinical conditions [1], the molecular mechanisms underlying the beneficial effects of these diets are still largely unknown. This is a very critical issue, as the characterization of these mechanisms could enable the development of potential long-term therapeutic options to extend the benefits of carbohydrate restriction after diet discontinuation [32].
The epigenome is a link between an individual’s genetic background and the environment, and it determines an organism’s ability to respond and adapt to changes in the environment [33]. Diet is among the most important epigenetic modulators [34][35], and increasing evidence suggests that epigenetic changes are associated with nutritional deficiency or supplementation [36][37] and with ketogenic diets [38][39][40][41][42].
The term epigenetics refers to heritable changes in gene expression without changes in DNA sequence. Major epigenetic mechanisms include DNA methylation, histone modifications, microRNA, and chromatin remodeling. All of these mechanisms can bidirectionally affect the state of chromatin by changing it from “closed”, which restricts the access of transcription proteins, to “open”, which allows the access of transcription factors [43] and the initiation of transcription.

DNA methylation is the most studied epigenetic modification. It consists in the transfer of a methyl group from the main methyl-donor, S-adenosylmethionine (SAM), to the C5 position of cytosine within CpG dinucleotides and the formation of 5-methylcytosine [44]. This process is mediated by the action of enzymes belonging to the family of DNA methyltransferases (DNMTs) [45].
Most of the available information on the effects of KD on DNA methylation comes from a rat model suffering from chronic epilepsy or from the adjuvant treatment in drug-resistant epilepsy [46]. Administration of a ketogenic, high-fat, low-carbohydrate diet to these animals attenuated seizure progression and reduced the global DNA methylation status [47]. These effects are likely related to the KD-induced increase in adenosine in the hippocampus [48][49]: increased adenosine promotes the formation of S-adenosylhomocysteine (SAH) [50], which in turn blocks DNA methyltransferase [51], reducing global DNA methylation [50][52]. Global DNA hypermethylation has been found in patients with temporal lobe epilepsy [53], and increased concentrations of adenosine in the brain observed after KD have been proposed as the main mechanisms by which this diet improves the clinical picture in patients with drug-resistant epilepsy [52][54][55].
Complex changes in DNA methylation patterns have also been found during aging [56][57] and have been associated with various age-related diseases [39]. It has been suggested that KD or exogenous ketogenic supplements [58] may promote anti-aging effects [58][59][60][61]. It is likely that these effects occur via the modulation of the DNA methylation of the same genes that respond to changes in brain adenosine levels [50][57], including KLF14, ELOVL2, FHL2, OTUD7A, SLC12A5, ZYG11A, and CCDC102B genes [57].
Recently, an interesting study was published examining the effects of VLCKD for the treatment of obesity on DNA methylation patterns [62]. In the study, 850,000 CpG sites were compared, using a dedicated array-based platform, between twenty-one patients with obesity after six months of VLCKD and twelve normal-weight volunteers. After weight reduction by VLCKD, differences were found in 988 CpG sites (786 unique genes) whose methylation patterns resembled those of normal-weight volunteers, suggesting the downregulation of DNMT1, DNMT3a, and DNMT3b gene expression [62]. Several of the genes whose methylation status changed were involved in metabolic processes, protein metabolism, and the development of muscles, organs, and skeletal system development, confirming the hypothesis of epigenetic dysregulation in the adipose tissue of subjects with obesity [63][64]. In addition, changes in the methylation status were also detected in some novel genes, including ZNF331, FGFRL1, CBFA2T3, C3orf38, JSRP1, and LRFN4, whose methylation status was specifically associated with VLCKD-induced weight loss and/or ketosis [62].
It is well known that a specific methylation profile is associated not only with obesity in various tissues [65][66][67][68][69][70][71], but also with complications of obesity such as insulin resistance [63] and cancer [72][73]. Therefore, it is possible to hypothesize that one of the mechanisms by which VLCKD contributes to the maintenance of weight loss in the treatment of obesity is related to the changes in DNA methylation that this diet may induce [31][74].
The described effects of KD/VLCKD on DNA methylation are shown in Figure 1. Data in the literature suggest that the effects on DNA methylation caused by KD or VLCKD may be various and more complex than those reported so far; therefore, additional studies are needed to clarify these interplays. 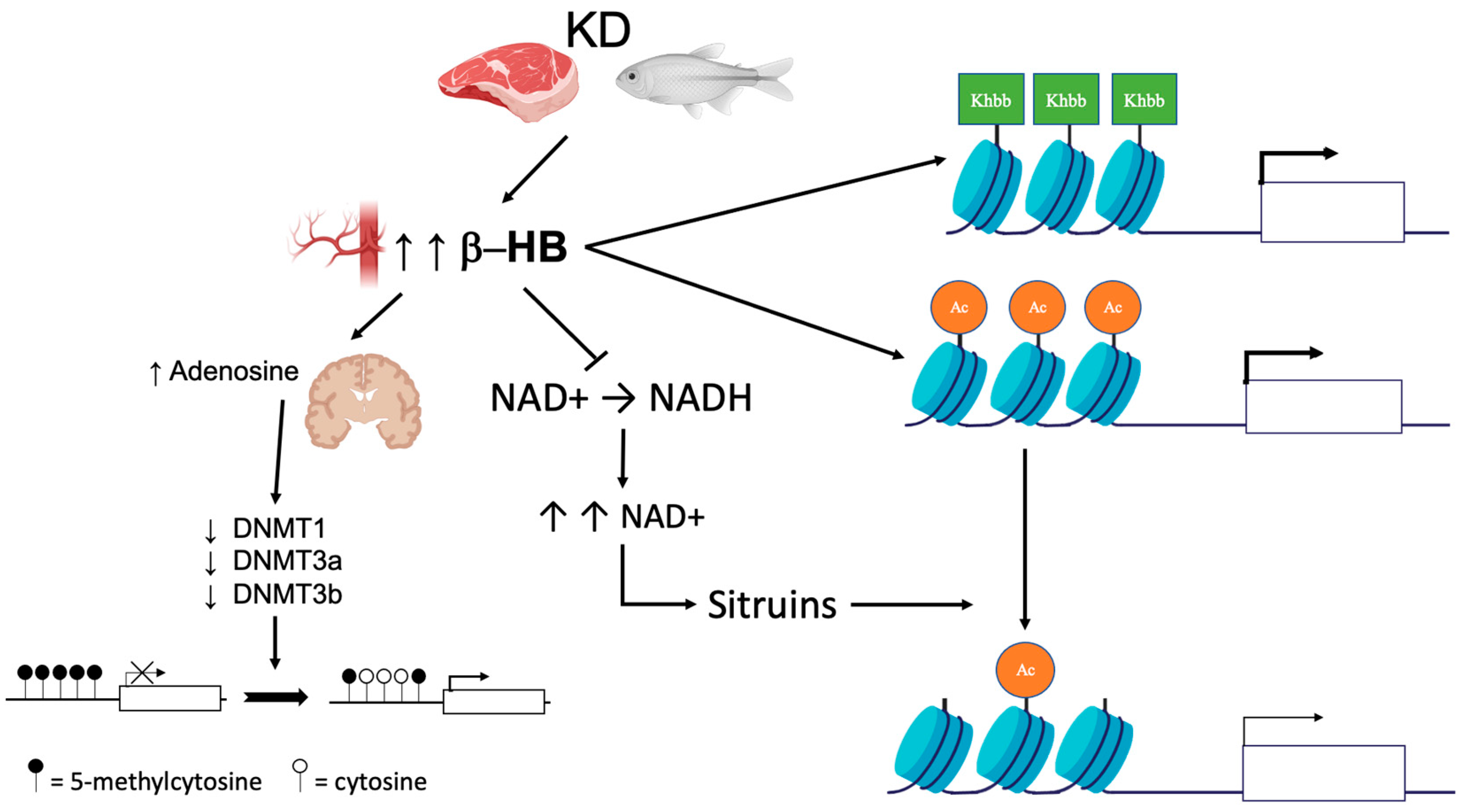 Figure 1. Epigenetic changes induced by KD. KD leads to an increase in circulating ketone bodies (β-hydroxybutyrate [β-HB]). In the brain, higher concentrations of β-HB have inhibitory effects on DNA methyltransferases (DNMT) via an increase in adenosine, which in turn leads to global DNA hypomethylation. Ketone bodies also act as epigenetic modifiers that determine covalent modifications at key histones such as lysine acetylation (Ac), methylation, and β-hydroxybutyrylation (Kbhb). Finally, β-HB is less efficient than glucose as a substrate for NADH production. The increase in the NAD + level promotes histone demethylation via the modulation of sirtuin activity.