+1 point
Thank you for your contribution! You can also upload a video entry related to this topic through the link below: https://encyclopedia.pub/user/video_add?id=27239
Check Note
2000/2000
Concentration Cells Corrosion

In marine environments, microbial attacks on metallic materials result in microbiologically influenced corrosion (MIC), which could cause severe safety accidents and high economic losses. To date, MIC of a number of metallic materials ranging from common steels to corrosion-resistant ferrous alloys has been reported. The MIC process has been explained based on (1) bio-catalyzed oxygen reduction; (2) kinetics alternation of the corrosion process by increasing the mass transport of the reactants and products; (3) production of corrosive substances; and (4) generation of auxiliary cathodic reactants.

Microbiologically influenced corrosion (MIC) is the corrosion process initiated and facilitated by microorganisms. It has been reported that 20 to 40% of the corrosion is caused by the direct or indirect involvement of microorganisms [1]. A number of microorganisms such as sulphate-reducing bacteria (SRB), methanogens, fermenters, acetogens, iron-reducing bacteria (IRB), sulphate-reducing archaea (SRA), iron-reducing archaea (IRA), iron-oxidizing bacteria (IOB), acid-producing bacteria (APB), manganese-oxidizing bacteria (MOB), and slime-producing bacteria do exist in biologically active sludge and sea water [2]. By reacting with the surrounding corrosive substance, microorganisms develop a highly aggressive environment for different ferrous alloys. The surfaces of under-deposit carbon steel pipelines in marine environments provide favourable sites for bacteriological activities, resulting in the establishment of biofilm. The biofilm produces extracellular polymeric substances (EPS) and enzymes, which creates very complex array of microenvironments. This process makes the deposits more electroactive, leading to the accumulation of more corrosive substances on the pipeline surfaces [3]. Pseudomonas aeruginosa, a kind of marine bacterium, is well-known for its severe corrosion-causing behaviour. Corrosion induced by P. aeruginosa on different metallic materials ranging from common steels to highly corrosion-resistant materials such as duplex stainless steels and titanium alloys have been reported [4][5][6][7]. Elemental composition of the metals, surface topography, presence or absence of passive oxide film, and mechanical properties such as stress play important roles in determining the rate of the corrosion process. Both carbon steel and stainless steel are iron-based alloys, but MIC behaviour is different on their surfaces. Elements such as iron, chromium, nickel, molybdenum, and copper which constitute iron-based alloys such as carbon steel, stainless steel, etc. strongly affect the microbial attachment and the rate of MIC. Iron has a great influence on MIC and it has been reported that SRB cells in the medium containing a high concentration of iron produced more EPS compared to iron-deficient medium, showing that high concentrations of ferrous ions can significantly speed up corrosion by SRB [8]. Moreover, Bradley observed that lipopolysaccharides situated in the outer membrane of gram-negative bacteria can react with ferrous ions (Fe2+) [9]. Chromium and molybdenum, which are responsible for the formation of passive oxide films, monitor the bacterial cell attachment and biofilm formation on stainless steels surface. Because the passive film comes between the biofilm and substrate, the MIC resistance of stainless steel is much higher than carbon steel [10]. Although chromium oxide passive film makes stainless steel resistant to corrosion, it is still not immune to MIC. Moreover, Shewanella algae (S. algae) is also one of the marine microorganisms enhancing the process of corrosion in marine environment. The synergistic effect of S. algae and chloride ions in simulated marine environments was investigated, and it was found that S. algae decreased the passivity of the oxide film of alloys, leading to the acceleration of chloride ion diffusion into the matrix [11]. Bacterial involvement in the process of corrosion can be classified as either (a) direct, where bacteria directly influence the rate of anodic and cathodic reaction, or (b) indirect, where they generate acidic metabolites which accelerate the corrosion process of the materials [12][13][14]. Bacterial activities cause accumulation of deposits and formation of bacterial biofilm on the ferrous alloys leading to severe corrosion attack [15]. MIC is mainly responsible for localized corrosion such as pitting corrosion and crevice corrosion. Both crevice and pitting corrosion are types of localized corrosion, which means that these forms of corrosion occur in a limited area on the surface, leading to a high corrosion rate compared to the uniform corrosion. The crevice corrosion usually happens in a narrow fissure with a width of a few micrometers. These fissures are generally caused by external agents such as insulation and paint remnants, etc. that form a crevice on the material surface. Pitting corrosion normally begins with microbial colonization and chloride accumulation that rapidly penetrate the protective oxide film covering the metal surface, and these points act as initiation sites for pitting corrosion. In addition, selective dissolution is also a way to initiate pitting corrosion and occurs when one of the components dissolves faster than other components. With the passage of time this localized dissolution leads to the formation of a pit in the metal surface. According to the previous research, the increase in the cathodic reaction rate by bacterial biofilm encouraged the crevice corrosion propagation [16]. Severe crevice corrosion has been reported for stainless steel alloy in the presence of mesophilic microorganisms biofilms [17]. Furthermore, it has been reported that the frequent existence of microorganisms in marine water and their biofilm formation on the material surface increased the risk of pitting corrosion [18][19][20][21]. A huge amount of research has been performed on the interaction of microorganisms and ferrous alloys. The main findings of the researchers working on MIC of ferrous alloys are given in Table 1. In addition, researchers working in this area have proposed different solutions for MIC mitigation. Some of the proposed solutions are given below: (a) killing the iron oxidizing bacteria, (b) eliminating the contact of bacteria with the metal substrate, (c) reinforcing the metal substrate with a non-metallic repair option that is not susceptible to MIC, (d) mechanical cleaning techniques, (e) use of biocides, and (f) incorporation of antibacterial agents such as copper and zinc.
Many studies have been carried out on microbiologically influenced corrosion, including biofilm formation, corrosion behaviour, mitigation strategies of MIC, etc. [22][23][24][25], but less research is concentrated on discussing the different MIC mechanisms of ferrous alloys. Therefore, researchers summarized the impact of microorganisms on corrosion and reviewed several important MIC mechanisms of ferrous alloys.
Table 1. The main findings of the researchers in the field of MIC of metallic alloys.

2. Corrosion Induced by the Concentration Cells

Microorganisms establish different types of concentration cells, including oxygen concentration cells and metal concentration cells, that locally attack the steel surface and accelerate pitting corrosion. Figure 1 shows the pitting corrosion of carbon steel caused by SRB. In concentration cells the conditions established for localized corrosion do not need huge numbers of microorganisms or their viability. Bacteria get attached to the steel surface and form biofilm with the help of EPS, which works as a diffusion barrier for corrosive agents like oxygen. However, the development of biofilm and the formation of an EPS layer are not always uniformly distributed on the whole surface of the material. The uneven thickness of biofilm and non-uniform distribution of EPS and the formed corrosion products lead to the formation of oxygen concentration cells. The oxygen concentration cells locally attack the steel surface and accelerate the corrosion process [29]. Corrosion is the process of chemical or electrochemical reaction of the exposed surface of the material with the surrounding aggressive environment [30]. This interaction affects the structure and properties of the materials. There is a natural tendency for almost all metals to oxidize and return to their original form of the ore, where they are thermodynamically stable. For instance, the iron ore called hematite is depicted as α-FeOOH and the common oxides formed by the corrosion reaction of iron are iron oxide-hydroxide (FeOOH), where iron returned to its original form of 3+ oxidation state [26]. In aerated marine water, iron oxidizing bacteria (IOB) develop oxygen concentration cells on the surface of 300 series stainless steels and accelerate under-deposit corrosion [31]. It has been reported that IOB produce highly dense deposits that hinder oxygen diffusion into the material surface, creating anodic sites. In such circumstances the corrosion rate does not depend on the number of bacterial cells present in the deposit, but rather on the metallurgy of the material and the physical/chemical properties of electrolytes such as dissolved oxygen and chloride ions (Cl−). Another study reported copper deposition under IOB deposits formed on carbon steel pilings in Duluth-Superior Harbor (DSH) [32]. It was found that the presence of a copper layer leading to the formation of galvanic couple with the iron substratum and the galvanic current was dependant on the iron concentration in the electrolytes instead of the number of bacterial cells. Furthermore, concentration cells can also be formed when metal ions interact with the anionic functional groups such as carboxyle, sulphate, pyruvate, phosphate, and succinate present in EPS secreted by microorganisms.

Figure 1. Biofilm formation and pitting corrosion on the surface of carbon steel measured by SEM (a,b). Pit depth measured by confocal laser scanning microscopy CLSM (c). Carbon steel pipeline in water-logged anoxic soil (d), where the arrow sign represents the external pitting corrosion at welding sites. Reprinted with permission from ref. [33]. Copyright 2022 Elsevier. Welding site with corrosion pits (e) where numbers indicate pit depth in millimetres. Higher magnification of corrosion pits from different sites at the same pipeline (f). Reprinted with permission from ref [22]. Copyright 2022 ASM. Schematic diagram showing the mechanism of MIC caused by SRB at iron surface (g). Reprinted with permission from ref. [34]. Copyright 2022 MDPI.
It is known that biofilm development is not uniform on the metal surface. The metal part underneath the biofilm will work as an anode while the uncovered surface will act as the cathode, resulting in the formation of a galvanic cell, allowing the flow of electrons from anode to the cathodic region of the steel, thus leading to the corrosion of metals. Figure 2 shows the bacterial attachment and the biofilm formation on the metal surface [35]. Figure 2a,b explicates how the microorganisms get attached to the surface, colonize, and secrete extracellular polymeric substances to develop biofilm. Once the biofilm is fully developed and matured it releases the bacteria which move out from the biofilm and try to find a new surface for their attachment. Figure 2c is the CLSM result showing the increase in the biofilm thickness of the marine bacteria with increasing immersion time on the surface of the X80 pipeline steel. 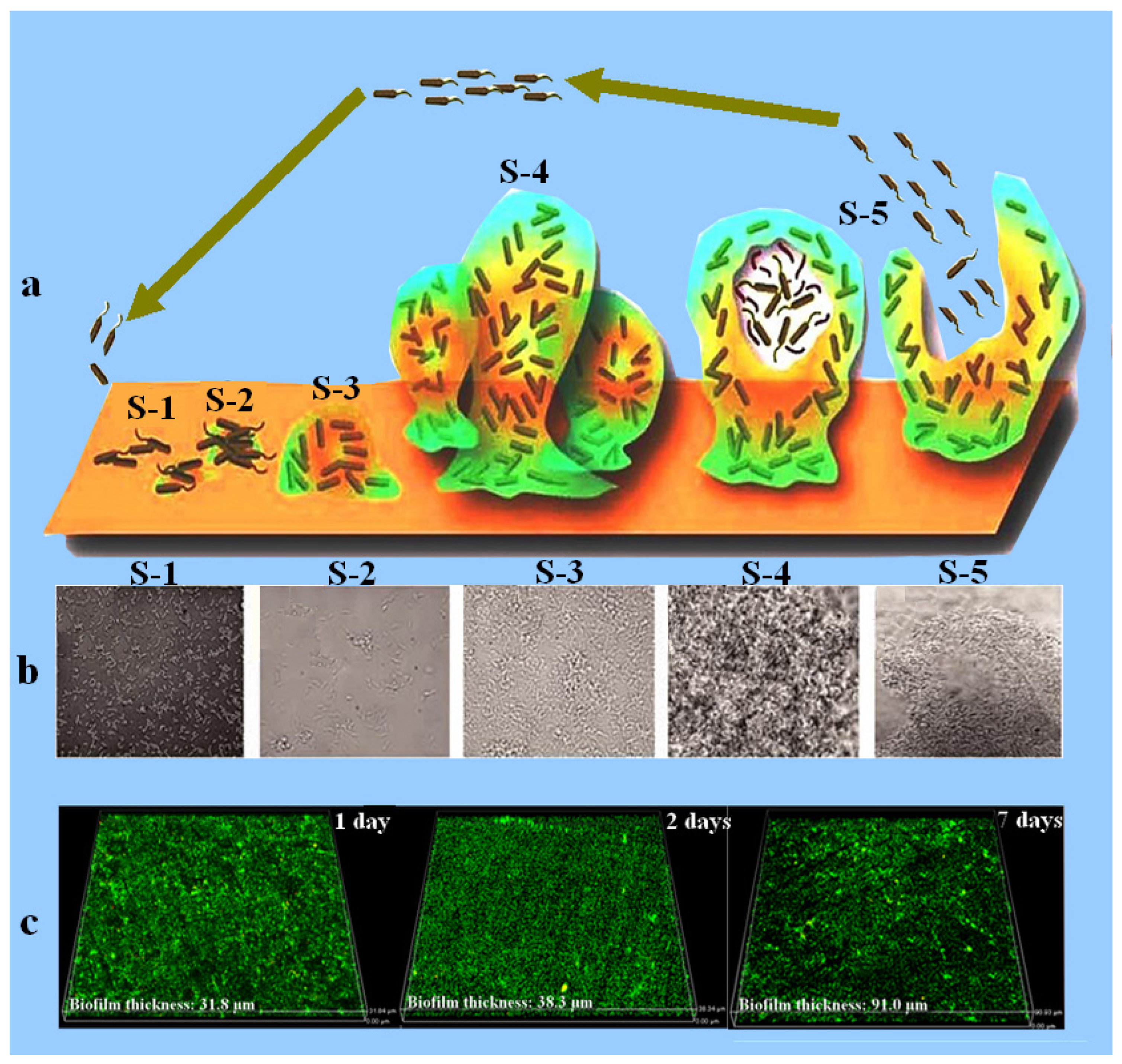