+1 point
Thank you for your contribution! You can also upload a video entry related to this topic through the link below: https://encyclopedia.pub/user/video_add?id=27185
Check Note
2000/2000
Regulatory Roles of Estrogens in Psoriasis

Psoriasis is a common chronic inflammatory skin disease of the interleukin (IL)-23/IL-17 axis. The severity of psoriasis has been reported as higher in men than in women. The immunoregulatory role of female sex hormones has been proposed to be one of the factors responsible for sex differences. Among female sex hormones, estrogens have been suggested to be significantly involved in the development of psoriasis by various epidemiological and in vitro studies.

Psoriasis is a common chronic inflammatory disease with well-demarcated red scaly plaques throughout the body [1]. The prevalence of psoriasis is estimated to be approximately 0.5~8.5% of the worldwide population [2]. Although the pathogenesis of psoriasis has not been fully elucidated, it is now widely accepted that the interleukin (IL)-23/IL-17 axis is a central pathway in psoriasis development, especially in plaque-type psoriasis [3]. In psoriatic lesions, IL-23 is primarily produced by inflammatory dendritic cells (DCs) [1]. IL-23, together with IL-1β, induces IL-17A/F and IL-22 production in various IL-17-producing cells, such as Th17/Tc17 and γδT cells [4][5]. IL-17/22 then activates keratinocytes to produce inflammatory molecules/chemokines such as chemokine (C-X-C motif) ligand (CXCL)-1, 2, and 8; chemokine (C-C motif) ligand 2 (CCL-2); and CCL-20, which recruit inflammatory cells including neutrophils, inflammatory macrophages, and T cells to the skin and accelerate psoriatic inflammation [1][6]. T cells, macrophages, and keratinocytes produce tumor necrosis factor-α (TNF-α) and amplify these cytokine networks [6]. Other than these cytokines, IL-36 and IFN-a are mainly involved in the development of pustular psoriasis and paradoxical psoriasis, respectively [7]. In addition to these central pathways, various genetic and environmental factors are involved in the modification of psoriasis development, and female hormones are suggested to be disease-modifying factors [8].
Estrogens are representative female hormones that are produced mainly in the ovaries. Estrogens play an important role in controlling the female sexual cycle, pregnancy, and childbirth. However, estrogens may also be involved in regulating immune cell functions [9]. For example, estrogen suppresses nuclear factor-κ B (NF-κB) and mitogen-activated protein kinase (MAPK) signaling and downregulates inflammatory responses in various cell populations in vitro [9][10]. However, it remains unclear whether these immune-regulatory functions of estrogens play physiologically significant roles in inflammatory diseases, including psoriasis.

Estrogens are a group of steroid hormones present in three major physiological forms: estrone (E1; molecular weight (MW) 270.4 g/mol), 17β-estradiol (E2; MW 272.4 g/mol), and estriol (E3; 288.4 g/mol). Estrogens are mainly produced from cholesterol in the ovaries. Estrogens are also produced in the liver, heart, skin, brain, male testes, adrenal glands, and fat tissues [11]. E2 is the most abundant and potent estrogen at the reproductive age. In males, serum E2 levels are less than 40 pg/mL [12], whereas, in females, serum E2 levels range between 30 and 800 pg/mL during the menstrual cycle and increase up to 20,000 pg/mL during pregnancy [11]. After menopause, the serum E2 levels decrease to <20 pg/mL. In the postmenopausal period, serum E2 levels decrease by 85–90% from the mean premenopausal level [12].

2.2. Estrogen Receptors and Their Signaling

Estrogen signaling is primarily mediated through two estrogen receptors (ERs)—ERα and ERβ—which are expressed in a wide variety of cell types, including neutrophils, monocytes/macrophages, T cells, and DCs [9]. ERα and ERβ genes are encoded by Esr1 and Esr2 and these genes are located on 6 and 14 chromosomes, respectively. E2 binds to these receptors to form dimers, which translocate to the nucleus (Figure 1). In the classical genomic pathway, the dimers bind to estrogen response elements (ERE), and activate the target gene expression. In the non-classical pathway, the dimers interact with other transcription factors, such as NF-κB, specificity protein 1 (SP1), activator protein-1 (AP-1), and CCAAT/enhancer binding protein β (C/EBPβ), and prevent their binding to the transcription factor regulatory elements, leading to the inhibition of their target gene expression [13][14][15]. Of note, these transcriptional factors control the gene expression of many psoriasis-related cytokines and chemokines. For example, NF-κB is involved in the transcription of genes such as IL-23, IL-1β, TNF-α, CCL-2 and CXCL-1; SP1 in IL-1β and TNF-α; and AP-1 and C/EBPβ in IL-23 and IL-36, respectively [16][17][18][19][20]. 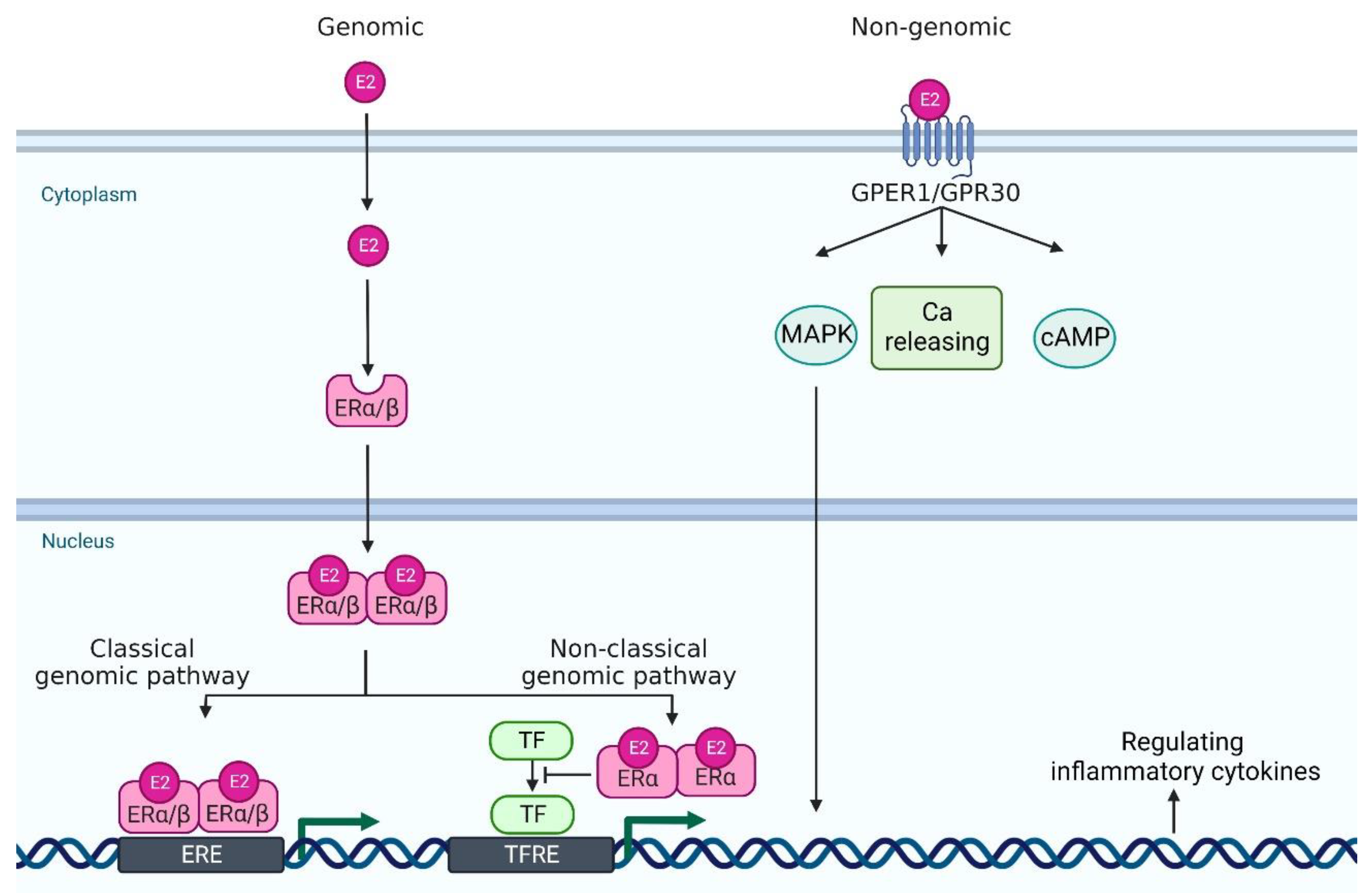 3. Epidemiological and Case Series Studies about the Possible Involvement of Estrogens in Psoriasis

There are various epidemiological studies investigating the prevalence and severity of psoriasis in men and women. Some studies indicate that the prevalence and severity of psoriasis are higher in men than in women [23][24][25][26][27][28][29][30], especially at the estrogen abundant age [31], while other reports failed to observe significant differences in the prevalence of psoriasis between men and women [32][33][34] (Table 1). A recent systematic review indicates that the prevenance is similar between men and women, but the severity in women is lower than men [35]. The age of disease onset is also different between men and women. For example, a German study demonstrates that the age of onset has two peaks, one occurring at the age of 16 years in women or 22 years in men, and a second at the age of 60 years in women or 57 years in men [34]. Recent studies indicate that the two peaks for age at onset are around 18–29 and 50–59 years in women, whereas they are around 30–39 and 60–69 or 70–79 years in men [36]. During pregnancy, in which serum levels of female hormones dramatically change, approximately 33–55% of patients with psoriasis show improvement in symptoms, although some patients, especially patients with pustular psoriasis, occasionally show exacerbated symptoms during pregnancy [37]. In contrast, in the postpartum period, approximately 65% of psoriasis patients exhibit worsening of skin lesions associated with decreased levels of female sex hormones [38][39][40][41][42][43]. Serum levels of E2 and the relative ratio of serum levels of E2 to that of progesterone correlate with psoriasis severity in pregnant patients with psoriasis [38]. Serum E2 levels are inversely correlated with psoriasis severity [44]. Low-dose E2 administration induces improvement in psoriatic arthritis [43], but it is not effective against pustular psoriasis and plaque-type psoriasis [45][46]. On the other hand, it has been reported that tamoxifen, an antiestrogen agent, results in the remission of psoriasis, whose symptoms worsen during a perimenstrual cycle [47]. These studies suggest that estrogens have both proinflammatory and anti-inflammatory roles in psoriasis.
Table 1. A summary of previous reports on the prevalence ratio of psoriasis between men and women.

More
© Text is available under the terms and conditions of the Creative Commons Attribution (CC BY) license; additional terms may apply. By using this site, you agree to the Terms and Conditions and Privacy Policy.
Upload a video for this entry
Information
Subjects: Dermatology
Contributors MDPI registered users' name will be linked to their SciProfiles pages. To register with us, please refer to https://encyclopedia.pub/register :
Akimasa Adachi
,
Tetsuya Honda
View Times: 67
Revisions: 2 times (View History)
Update Time: 20 Sep 2022
Table of Contents
1000/1000
Hot Most Recent