+1 point
Thank you for your contribution! You can also upload a video entry related to this topic through the link below: https://encyclopedia.pub/user/video_add?id=27127
Check Note
2000/2000
Lactic Acid Bacteria for Meat Preservation and Fortification

Lactic acid bacteria (LAB) are considered the safest organism and have a profound role in food and food-processing industries. The biofilm developed by the bacteria prevents the growth of various undesirable microorganisms on meat and meat products. Various studies depicted that LAB produces various antimicrobial metabolites that can act effectively on the food-degrading pathogens, rendering it safe and enhancing shelf-life.

The growing refusal of the consumers toward using food with chemical preservatives and additives has forced the food industries to use biopreservatives for food safety. The additives are used to maintain the quality and freshness of food, fortify or add nutritional value, and enhance the palatability to improve the taste or appearance of food. These days, beneficial bacteria and their metabolites, as potential natural preservatives for shelf life extension, are the most preferred option [1]. The use of meat and various meat products has always been an important part of the diet for humans, as it contains various essential nutrients that support health and growth. However, in most cases, the meat and meat products are susceptible to contamination by microorganisms, resulting in enhanced health risks for the customers and economic loss for the industry [2]. Among processed food, meat and meat products represents a serious challenge for the food industry, as the possible microbial contamination of fresh meat and meat products by various harmful bacteria, such as Listeria monocytogenes, cannot be handled by physical ways only, such as lowering the pH, freezing, and salting. Hence, such problems are produced by common food degrading microorganisms. One of the most used forms to address such problems is the use of lactic acid bacteria (LAB) and intelligent use of their antimicrobial properties, including production of bacteriocins and production of primary metabolite lactic acid, which in turn can decrease the pH, inhibiting the growth of a wide variety of food spoilage organisms [3].
LAB can grow in various habitats, including fermented meat, vegetables, fruits, beverages, and dairy products, in the respiratory, intestinal, and genital tracts of humans and animals, in sewage, and in plant materials [4]. They are normally found in nutrient-rich environments. They require fermentable carbohydrates, amino acids, fatty acids, salts, and vitamins for their growth [5] and compete actively and efficiently with other microbial species for the nutrients, resulting in a substantial enhancement in their viability. This results in the enhancement of the metabolic activities, causing the production of the desired type of metabolites possessing an inhibitory effect on the food-spoilage and pathogenic microorganisms, such as Escherichia coli and Staphylococcus aureus. Since homofermentative LAB can produce lactic acid from various types of fermentative carbohydrate sources present within meats, the homofermentative LAB is predominantly used in the mechanism of meat preservation. Bacteriocins produced by the group of LAB can be used as efficient preservative of meat and meat based products [3].

2. Bacteriocins and Their Classification

The performance of bacteriocin containing N-Terminal leader sequence is encoded by the structural bacteriocin gene, which helps prevent the activation of bacteriocin when present within the producer cell and helps recognize the transporter system (Figure 1). 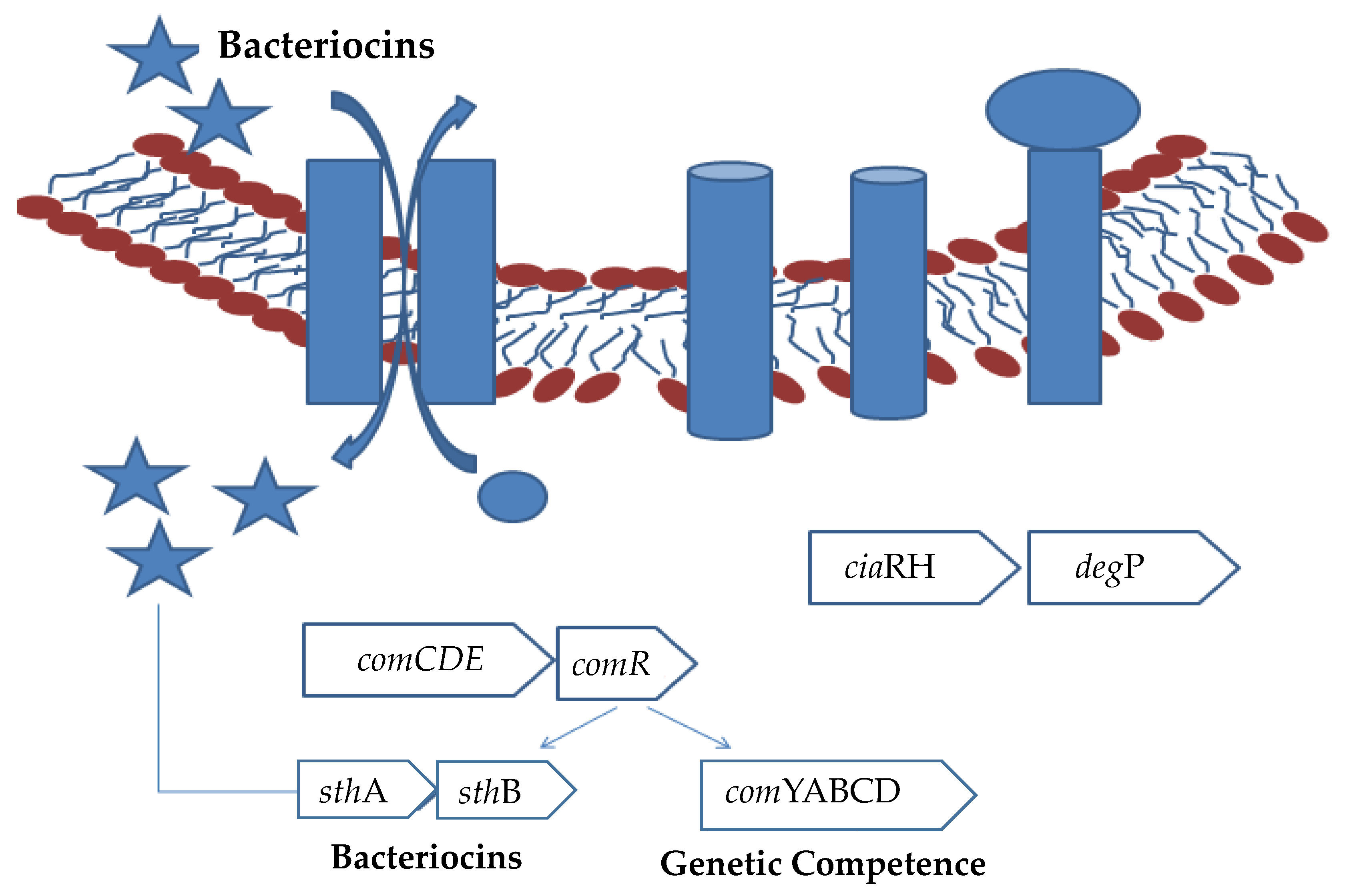 Figure 1. Genetic regulation in the production of bacteriocin production by LAB. Upregulation of the genes results in the production of the bacteriocins. The star symbols indicate bacteriocins. Circles indicate the proteins being produced within the cell.
The start codon codes for glycine that comprises 14–30 residues. The consensus elements in the double glycine leader comprise two glycine residues present at the C-terminus of the cleavage site, conserved hydrophobic and hydrophilic residues that remain separated by defined conserved residues. The double glycine leader comprises minimum of 14 amino acids. Among the consensus, residues being present within the leader, only the glycine at the −2 positions remains fully conserved. The mature bacteriocins are determined by a length of 30 residues but not more than 100 residues. It has been observed that colicin V comprises 80 residues that are being produced by Escherichia coli, which is formally grouped under class II bacteriocin [7]. Usually, bacteriocins comprise double peptides, both of which comprise double glycine leader and contain contiguous genes within the same operon. The peptides cannot be structurally differentiated from one another, and both are required for the optimal activity of the bacteriocin. The antimicrobial efficacy of Lactococcin MN and Lactococcin G is completely dependent upon the peptides being present at the leader sequence [8].
The bacteriocins under class II also share some common features like possessing high contents of amino acids like glycine. They are highly cationic, possessing a pI within the range of 8 to 11, and comprise the hydrophobic domain and amphiphilic region that provide its action upon the membranes [7]. The activity of Lacticin F is regulated by two functional genes, tafA and lafX, which enhance the ability of its inhibitory effect on other organisms.

4. Mechanisms of Action of Bacteriocin

There are several different mechanisms of bacteriocin action by which it exhibits its antimicrobial action to kill a pathogen or prevent food spoilage (Figure 2). The PMF (Proton Motive Force) Depletion mechanism, the Membrane Insertion & Pore Formation mechanism, and the Genetic control mechanism play an effective role in enhancing their activity or function.

Figure 2. Mode of action of the bacteriocins in preventing the growth of other microbial species.

5. Role of LAB in the Preservation of Meat and Meat Products

The use of LAB in the biopreservation of meat has provided a new arena in food preservation (Table 1). The studies were mainly performed in the use of LAB to eliminate various food-spoiling bacteria such as E. coli and Salmonella spp. Lactobacillus salivarius can inhibit L. monocytogenes and various types of Salmonella spp. thrive on the surface of the meat. Studies have also shown that L. salivarius does not degrade the quality of meat [9]. The biopreservation by LAB is controlled considerably in temperature [10]. It has also been observed that L. sakei helps control the growth of Salmonella enterica serovar Choleraesuis within fresh pork [11]. The combinatorial effect of LAB and Pediococcus pentosaceus helps in the marked reduction in the growth of Staphylococcus spp. within the raw meat [12]. It was observed that with the application of P. acidilactici, there was a reduction in the pathogenic count within the meat stored.
Table 1. LAB-associated protection of various types of packaged meat and meat products.
Still, the reduction in the pathogenic organism was found to be more when there was the combinatorial organism of P. pentosaceus and P. acidilactici was applied [16]. Higher temperatures, pH, and free fatty acids facilitate the protective activity exhibited by LAB [16]. The maintenance of pH below 5 by the LAB group is responsible for preventing the growth of pathogenic organisms in the meat. The lower amounts of thiobarbituric acid and free fatty acids within the cultures of LAB help in the lipolytic effect and oxidative damage of fat, thereby helping in the maintenance of freshness within beef. Bacteriocins produced from Pediococcus acidilactici when being applied to the meat of Turkey prevented the proliferation of the unwanted microbes such as L. monocytogenes, keeping it fresh for a longer period [1]. Studies have shown that a higher storage temperature facilitates the preservative action of the LAB in comparison to that of a lower storing temperature [21]. The planktonic and biofilm growth of Lactobacillus can act against Candida parapsilosis, a strain spoiling the meat products [22].

5.1. Mechanism of Protection of Meat and Meat Products by LAB

LABs are considered safe microorganism having the ability to produce various types of inhibitory compounds like organic acids, hydrogen peroxides, N-diacetyl, carbon dioxide, and bacteriocins. It can bring about inhibition of various types of harmful organisms by a competitive exclusion mechanism for various binding sites and nutrients. It has the ability of various enzymatic functions to aid in better nutrient utilization and the stimulation of the immunity in animals [23].
The meat-associated LAB can produce hydrogen peroxide that acts as a protective mechanism for preventing the damage by other pathogenic organisms [24]. Hydrogen peroxide produced by LAB acts as bacteriostatic for Gram-positive bacteria and bacteriocidal for Gram-negative bacteria [25]. Certain groups of LAB also possess the ability to produce biogenic amines by decarboxylation of the amino acids [26]. The presence of biogenic amines act as index for understanding the meet quality and stability [27].
Pediocin such as bacteriocins and pediocins exhibit antimicrobial potential and act as a potential antilisteria agent for biopreservation of meat and meat-associated products [28]. Various studies have shown that the application of bacteriocin-associated strains, and bacteriocin helps enhance the shelf-life of meat and meat products [29]. The use of bacteriocins in packaging also help in improving the safety of meat and meat products [2]. Sakacin G is a type of bacteriocin produced by Lactobacillus curvatus that plays an important role in preserving food and enhancing the shelf-life and safety of the meat and meat-associated products. It is being used as artificial and natural products that help preserve a wide range of meat. The major advantage of the bacteriocin is that it is used as an extra wrapping for supporting various types of antimicrobial efficacy [30].
The bacteriocins produced from the LAB are used as an important ingredient of food and act as an important source of food preservative within that act as ready-to-eat products. They have shown their efficacy as potent antimicrobial agents and prevent the growth of meat spoiling organisms [31] (Figure 3). 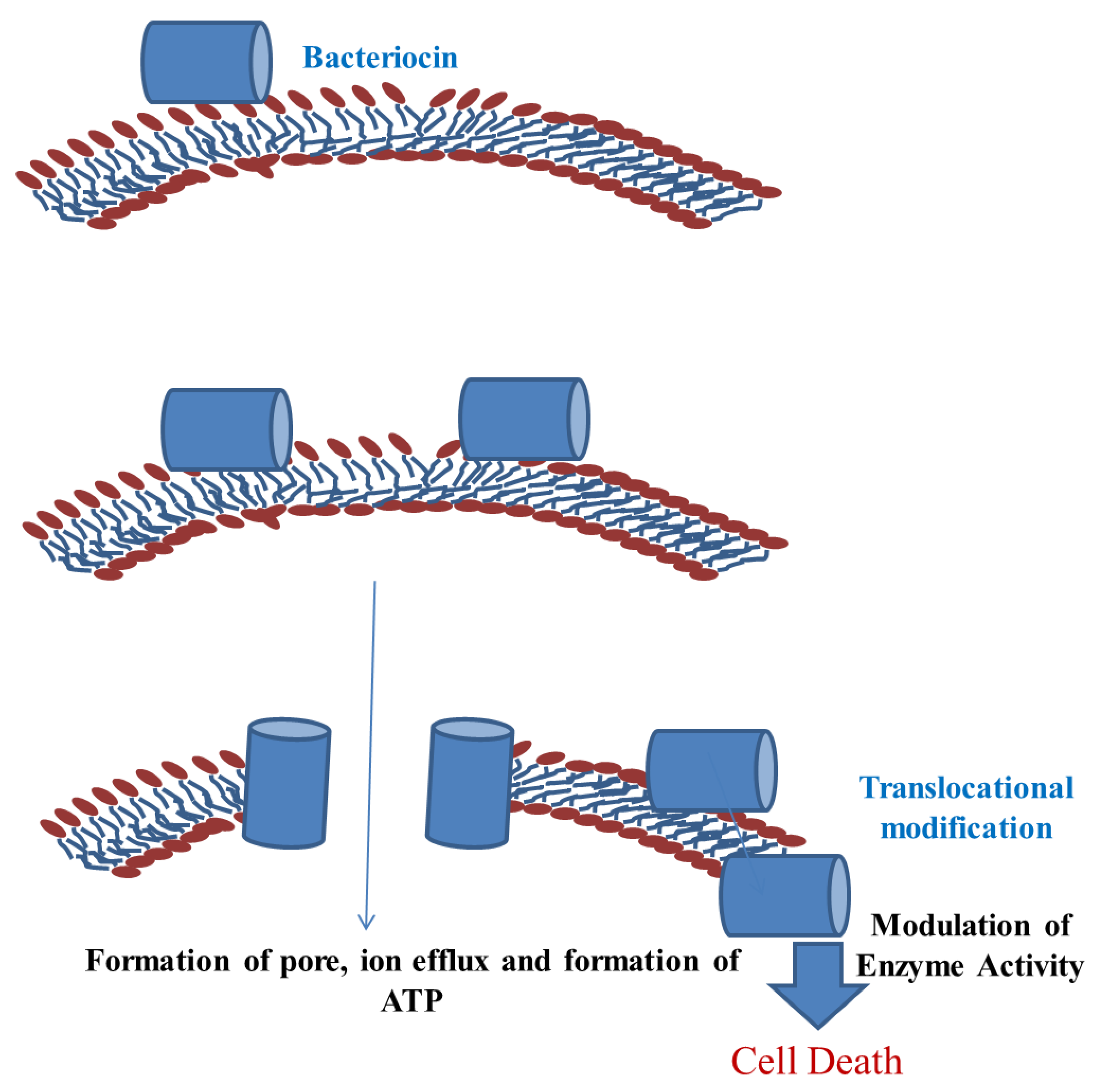 6. Fortification of Meat Products by LAB

Various types of probiotic bacteria help produce various nutraceuticals and micronutrients that help in the in situ mechanism of fortification of meat and meat-associated products. This results in enhancing the nutritional quality of the product [32]. The use of probiotics has various types of advantages that comprise improvement in the symptoms associated with lactose intolerance, enhancement of the immune responses, improvement in the digestion and intestinal transit, reduction of diarrhea, reduction in the chances of the development of colon cancer, and reduction in the level of cholesterol [33]. This has resulted in the use of probiotic organisms in meat preservation and safety for human consumption. The probiotic has shown its utility in raw fermented products such as salami. The probiotic properties associated with the LAB are used within the fermented meat products. These cultures provide technological and sensory characteristics and have a beneficial effect on the health of the consumers. It has been observed that salami comprise three important intestinal LAB groups like Lactobacillus casei and Bifidobacterium spp. Greater performance of fermentation of meat can be achieved by the group of Lactobacillus acidophilus bacteria comprising L. crispatus, L. amylovorus, L. johnsonii, L. gasseri, and L. acidophilus. The organisms were able to exhibit the greatest fermentation performance by preventing bile and gastric juices that usually have a detrimental effect in the intestine. This also prevents the growth of Staphylococcus aureus, thereby preventing the production of enterotoxin and helping produce higher quality meat and meat products [34]. Lactobacillus sakei produces lactocin S that can protect ham associated products, thereby helping to establish the biopreservative potential [35].