Submitted Successfully!
Thank you for your contribution! You can also upload a video entry related to this topic through the link below:
https://encyclopedia.pub/user/video_add?id=2707
Check Note
2000/2000
Towards Regenerative Energy Supply Options
Edit
Upload a video
This entry is adapted from 10.3390/su12208588

Often the main energy related challenges in Africa is how to avoid (reduce or manage) the environmental tradeoffs arising due to extractive energy sourcing mechanisms leading to ecosystem degradation. Avoiding or reducing the tradeoffs needs looking at energy as an intersectoral challenge rather than looking at it as a uni-sectoral agenda. Ecosystem-based approaches are pathways to produce energy feedstocks through interventions that enrich the ecosystems with due consideration of the interactions among the various sectors being affected and also affecting the energy production process. Regenerative energy supply options are interventions that lead to production of energy or energy feedstocks while enriching the ecosystems in which it is produced. Of the outstanding opportunities is the ongoing ecosystem restoration agenda that is being supported by multiple agencies around the world and in the continent. Our analysis revealed that there is great complementarity between the restoration movement and regenerative energy supply options.  that could change the narrative substantially.

Owen et al. [1] highlighted that despite developed countries pushing for biomass energy as a renewable low carbon energy option, in Africa biomass energy is viewed as a retrogressive and environmentally damaging energy option. Irrespective of this, biomass energy is likely to remain the key pillar of the energy systems on the continent. Hence, innovative options to produce, convert, and utilize it are key. The ecosystem-based approaches and the regenerative energy supply options are therefore crucial for informing the energy supply discourse on the continent.

The article “Regenerative Economy” [2] emphasizes that unless current business practices change, it is difficult to have a healthy planet since our current economic development approaches are not strongly considerate of the environmental consequences the built economy is creating. It argues that natural systems continued to survive to date because they are regenerative. The emphasis in the regenerative economy [2] is the concept of “system”. There is a connection between every component of a system, and a system is as strong as its weakest link, which Meadows [3] calls a leveraging point. A system operates with sets of universal principles and patterns: efforts to build the economy should then be able to simulate these universal principles and patterns that otherwise may damage the system structure. Liu et al. [4] argue that Earth on its own is a system, and all other sub-systems operate under the bigger principles and patterns. The authors argue that as a system, every element is interdependent, and there is a connection between all the components. It is in this inter-relation that materials flow, and for one to understand and conserve a system, it is essential to understand the flows in each direction in specific components of the system and how each flow relates to the stability of other system components.

2. The arguments of regenerative economy

Among the key arguments in regenerative economy [5] is that wealth should be considered in a holistic manner and not simply as monetary value; hence, it should include economic, social, and environmental wealth. The emphasis on GDP of our current economic thinking has led the global economy to focus on economic growth without due consideration for its social and environmental consequences [6]. Among these consequences are child labor, environmental pollution, human exploitation, and biodiversity loss. Liu et al. [4] contend that global sustainability challenges are interconnected and should not be treated as separate pieces. The authors argue for a system integration that looks at holistic solutions within the coupled human and natural systems so that sustainable solutions to the significant global challenges can be found.

Energy is the fundamental input to drive development. The entire earth system depends on energy to function. In any aspect of life and natural system, there is an energy aspect, particularly the biogeochemical processes. At the lowest scales, for example, smallholder households, villages, districts, and even at the national level, the context of energy changes depending on the local situation and priorities. Nonetheless, the inherent feature in systems, namely, interconnectedness, still prevails. Consequently, energy should be contextualized as an element of the broader system and not as a stand-alone issue. Within the energy sector itself, there are several relations, interactions, and flows that need to be viewed as a subsystem of the larger earth system. Therefore, we advocate strongly for the use of the concept of energy system(s) rather than referring to energy as a single piece of the issue. Figure 1 shows how the different energy sources that directly depend on the ecosystem relate to the sectors that policymakers tend to use. The conceptual representation does not show indirect linkages.

Figure 1. Authors’ conceptual representation of ecosystem-based energy sources and their relations with different ecosystem elements and sectoral dimensions. Rectangular boxes indicate an immediate ecosystem element associated with the energy production process. The outer part of the bigger circle shows the interconnected sectors that strongly link to the energy production process. 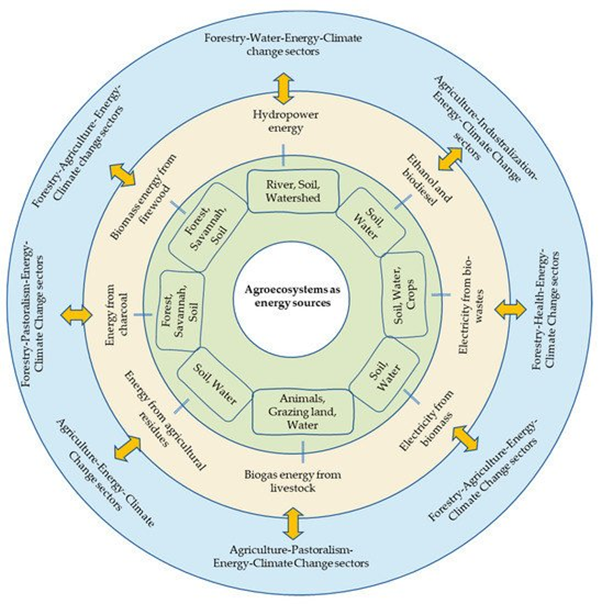 If the ecosystem elements on which energy supply depends are not appropriately managed, energy poverty is going to cripple the ecosystem and the economy broadly. Once ecosystem degradation peaks, its habitability could significantly decline as its potential to supply goods and services on which life depends gradually diminish. This creates a series of strong arguments for ecosystem-based approaches to energy production as formulated here.

The prosperity of our ecosystems depends on how they are managed. If the different sectors indicated to have a strong linkage with energy (Figure 1) are not part of the whole planning process of energy supply strategies, the trade-offs among the sectors will increase, as observed across the tropics where agriculture remains the main cause of deforestation. It is important to note that no single sector stands alone. They are all linked, and part of the whole, the sustained management of which whose sustained management needs to embrace regenerative energy supply. Figure 2, building on the principles described in [2][5], shows pathways to a regenerative supply schema that could be widely beneficial. Due to limitations in space, not all pieces of the schema are dealt with in detail. 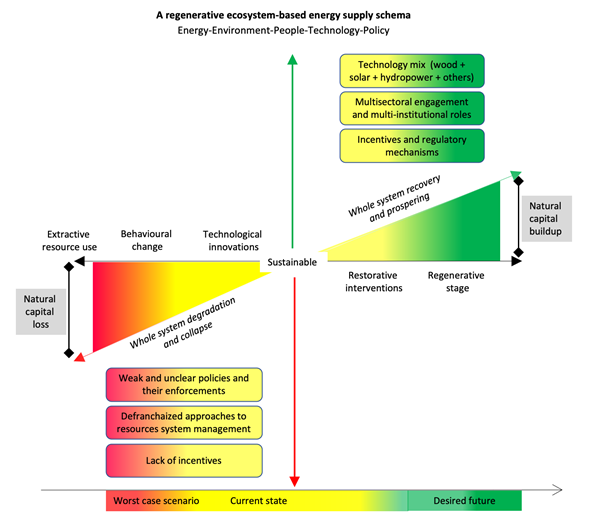 Figure 2. Redefining the path to regenerative ecosystem-based energy supply options based on the principles of a regenerative economy (adapted from Fullerton [17] and Reed [5]).

Reaching a desired future state of regenerative energy supply options requires a shift from the conventional way of thinking about and managing energy to a more holistic one. Sourcing energy must be considerate of the ripple effects it causes on the other components of agroecosystems as indicated in Figure 1. This can only be achieved if actions are taken to transition from the status quo (current modes of energy use) to a desired sustainable future condition (Figure 2). Several pathways could help.

Future research should focus on in-depth country level analysis to inform the way forward with making the energy sustainability discussion.

More
© Text is available under the terms and conditions of the Creative Commons Attribution (CC BY) license; additional terms may apply. By using this site, you agree to the Terms and Conditions and Privacy Policy.
Upload a video for this entry
Information
Subjects: Management
Contributors MDPI registered users' name will be linked to their SciProfiles pages. To register with us, please refer to https://encyclopedia.pub/register :
Esther Kamwilu
,
Lalisa Duguma
View Times: 263
Revisions: 2 times (View History)
Update Time: 30 Oct 2020
Table of Contents
1000/1000
Hot Most Recent