+1 point
Thank you for your contribution! You can also upload a video entry related to this topic through the link below: https://encyclopedia.pub/user/video_add?id=26781
Check Note
2000/2000
Sumac as a Functional Food

Utilization of Rhus coriaria L. (sumac) is upgrading not only in their culinary use and human nutrition, but also in the pharmaceutical industry, food industry and veterinary practices. This is driven by accumulating evidence that support the ethnobotanical use of this plant; in particular, advanced knowledge of the content of nutritional, medicinal and techno-functional bioactive ingredients. Most of the antioxidant potential and therapeutic roles of sumac are increasingly attributed to its constituent tannins, flavonoids, and phenolic acids. Hydroxyphenyl pyranoanthocyanins and other anthocynins are responsible for the highly desired red pigments accounting for the strong pigmentation capacity and colorant ability of sumac. Certain polyphenols and the essential oil components are responsible for the peculiar flavor and antimicrobial activity of sumac. Tannin-rich sumac extracts and isolates are known to enhance the food quality and the oxidative stability of animal products such as meat and milk. In conclusion, polyphenol-rich sumac extracts and its bioactive ingredients could be exploited towards developing novel food products which do not only address the current consumers’ interests regarding organoleptic and nutritional value of food, but also meet the growing need for ‘clean label’ as well as value addition with respect to antioxidant capacity, disease prevention, and health promotion in humans.

Food spices and herbs are not only desired for their aromatic and culinary properties but also for their potentials in disease prevention, drug therapy, industry and agriculture. These dietary components have played key roles in the lifestyle of people of different cultures through history, as they are valued and often utilized as coloring agents, flavoring agents, preservatives, and therapeutic agents in food preparation. Spices could be produced from several plant parts including the roots, rhizomes, stem bark, leaves, fruits, flower and seeds [1]. Although, most spices are dried and used in a processed but complete state, aromatic leaves, which are commonly referred to as herbs are often utilized in fresh state. Spice products can also be produced through solvents extraction of the oleoresins and other standardized products. Extracts such as essential oils which are known to contain the aromatic and pungent principles are often produced by distilling the raw wet or dried sample of the plant material. Spices vary greatly in composition but the lachrymatory factors and the medicinal value that render them valuable reside in their bioactive constituents viz: volatile oils, resins, and phytochemicals.
Sumac (Rhus coriaria L), is a culinary spice that has been used for several purposes in the Mediterranean region and the northern parts of Africa since antiquity. This plant, which belongs to the Anacardiaceae family, is the most economically important species among over 250 members of the genus Rhus. The plant thrives well in subtropical and temperate climates, particularly in various parts of the Mediterranean, Asia, and northern Africa [2]. The plant is a 3–5 m tall shrub, with long leaves, having pinnate veins with 7–8 pairs of small oval leaflets of varying sizes (Figure 1). Rhus coriaria produces dark red drupes with thin flesh, which form dense clusters at branch tips, known as sumac bobs. The plant owes its name to the red color of the important and widely used spice product of the plant. It is believed by some people that, the word sumac originated from the Arabic word “summaq”, which translates to “dark red”, while some other people believe that it is derived from “Sumaga” a Syriac word meaning to “red” [3]. These berries are edible, tangy and delicious, containing malic acid which is found in apples [3][4]. Sumac has a long history of culinary and traditional uses in different cultures [5]. Although, the fresh fruits of sumac can be used to make tea, more often they are dried, crushed and blended to a thin red-purple powder for use as culinary seasoning. The powder is widely used as a condiment to be sprinkled on dishes and used in combination with salt and onions as a seasoning for roast meat throughout the Mediterranean region [6]. In northern Africa, sumac is often rubbed on meats, chicken or fish. It is commonly added to marinades and also used to improve the flavor and acidity of yogurt sauces or vinaigrettes. It can be added to egg dishes and salads in order to enhance their taste and flavor. Due to its attractive red color, sumac products are used as decorative garnishes on several dishes [4][7]. Recognition of the medicinal value of sumac can be traced back to about 2000 years ago when the Greek physician Pedanius Dioscorides (40–90 AD) mentioned it in his writings “De Materia Medica” talking about “Medical Issues” and the benefits of sumac, especially as an anti-flatulent and diuretic [8]. The bark powder of Rhus coriaria has been used as an effective teeth cleaning agent, while its infusion has been used to treat viral eye infections. The powdered spice product from the dried fruit was sparsed on boiled eggs and consumed for diarrhea treatment [9]. A fruits decoction is set and traditionally administered for the treatment of hepatic diseases, urinary system disorders and diarrhea [9][10]. 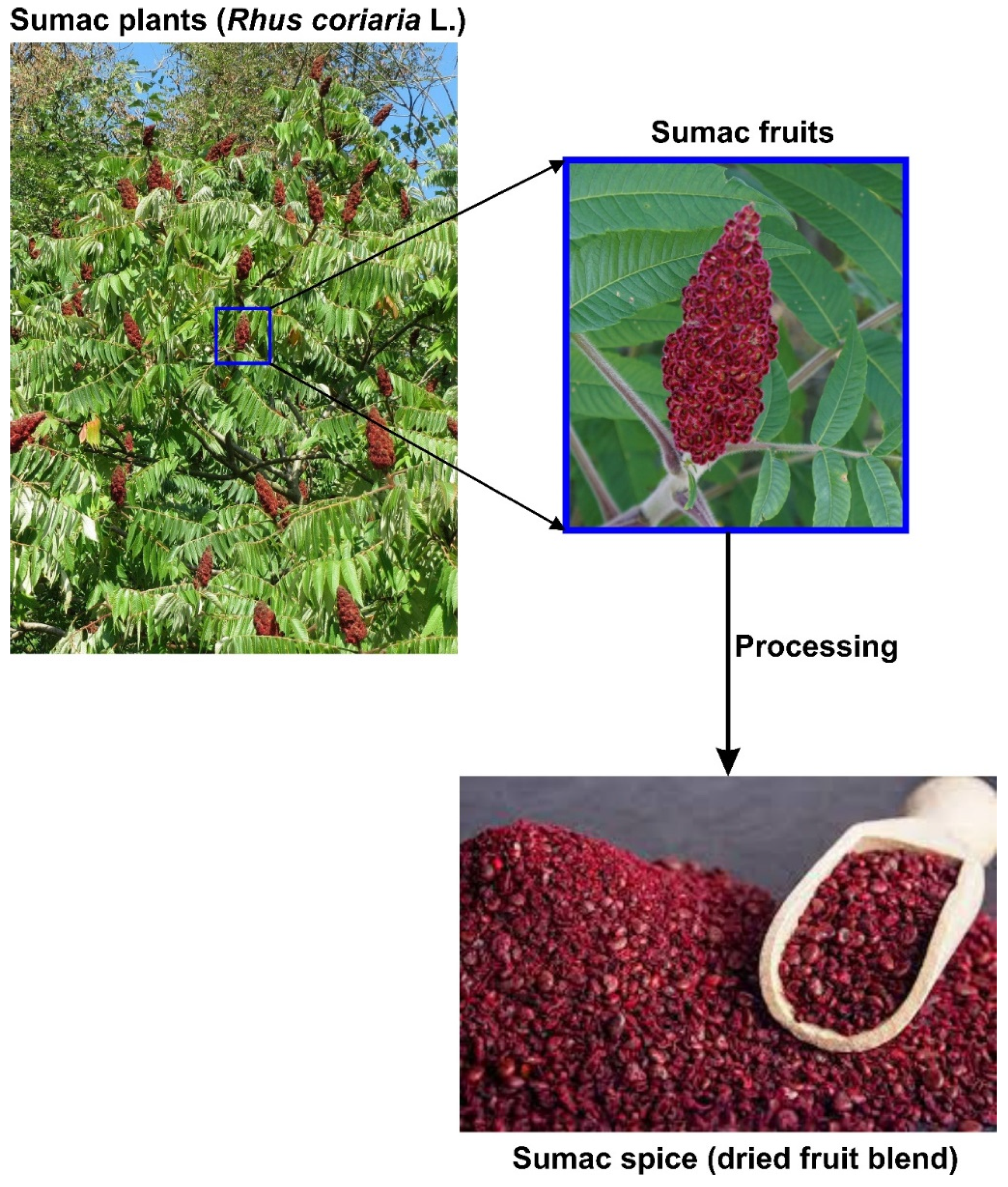 Figure 1. Sumac plants and its spice product.
In recent decades, the utilization of sumac spice is expanding based on increasing empirical evidence that support its ethnopharmacological use and advanced knowledge of the content of nutritionally and medicinally important metabolites such as proteins, unsaturated fatty acids, fiber, and minerals, essential oils, phenolic acids, tannins, anthocyanins and organic acids. Such evidence has been widely reported from in vitro and in vivo studies, and many have reached the stage of clinical trials in humans [11]. Recent studies are revealing that, sumac is a reservoir of dietary polyphenolic compounds, which has stimulated the study of their phenolic composition and antioxidant properties. Most of the biological activities, health benefits and industrial potential of sumac are increasingly attributed to the predominant polyphenol compounds in the plant materials [3][11]. Furthermore, the volatile constituent (essential oil), which the sumac fame, also comprise bioactive compounds that can significantly contribute to biological activity of the plant [7]. Thus, utilization of sumac is upgrading fast not only in its culinary use but also utilization as pharmaceutical/nutraceutical, food fortifier, food colorant, food preservative and animal feed additive [3][12].

2. Sumac as a Functional Food

The statement ‘Let thy food be thy medicine and medicine be thy food’, often ascribed to Hippocrates (400 BC), shows the early recognition of health benefits of healthy diets. The concept of functional food originated in Japan in the early 1980s to refer to processed foods that possess disease-preventing and/or therapeutic properties beyond their basic nutritional roles [11][13][14]. This concept often overlaps with nutraceuticals, which was coined by Stephen DeFelice to emphasize the complementarity between nutrition and pharmacology [13][15]. Sumac fruit has been recognized as a functional food due to the vast proportion of key nutritionally and pharmacologically important constituents such as proteins, essential oils, fatty acids, fiber, minerals, tannins, phenolic acids and anthocyanins [16]. Sumac plant (Rhus coriaria) is considered a rich and valuable dietary source of important nutrients which include unsaturated fatty acids, vitamins and minerals. These above studies have shown estimates of the overall composition of sumac fruit as illustrated in Table 1 and Table 2.
Table 1. Nutritional composition of the fresh and dried samples of sumac fruits.
Özcan and Hacıseferoǧulları [3] and Sakhr and El Khatib [17].
Table 2. Key nutrients in sumac fruits.
Özcan and Hacıseferoǧulları [3].
In a study, Kizil and Turk [12] detected oleic acid (37.7%), linoleic (34.8), palmitic (27.4%), stearic acids (17.3%) and other fatty acids from the petroleum ether extract of the fruit of sumac through GC-MS analysis, indicating the content of unsaturated fatty acids. Analyses of some sumac samples from Iran detected a total of 21 oil compounds representing 86.6% of the fatty acids present in the fruit samples [18]. Proximate analysis of different types of Sumac fruits in Turkey revealed 12.5% oil and 3.5% protein. In this study, Dogan and Akgul [18] further revealed the contents of important fatty acids which include: myristic acid (0.25%), palmitic acid (23.1%), stearic acid (3.1%), and oleic acid (37.5%). Interestingly, their study reported linoleic (omega 6) (34.84%) and α-linolenic acid (omega 3) (1.88%). Alsamri, Athamneh [7] reviewed that, sumac fruit contains important minerals including potassium, calcium, magnesium, phosphorus, iron, sodium, manganese, and copper. The mineral contents were found to be influenced by the prevailing environmental factors and geographic locations [12]. Although, studies on the vitamin composition of Rhus coriaria are still fragmentary. A study revealed that, sumac fruit is rich in pyridoxine, ascorbic acid, thiamine and riboflavin [19]. Other vitamins reported include cyanocobalamin, nicotinamide, and biotin [7].
Most studies on sumac have revealed similar phytochemical composition, with polyphenols such as tannins, flavonoids and conjugated phenolics as major constituents. The term phenolics refer to phytochemicals comprising aromatic ring with at least one hydroxyl group. Such compounds with one or more aromatic rings possessing more than one hydroxyl groups are referred to as polyphenols (or polyphenolic compounds). These compounds are basically categorized into flavonoids and non-flavonoid compounds. Flavonoids, the dominant class of plant-derived polyphenols comprise two phenolic rings connected by a three-carbon bridge with a common C6-C3-C6 structural skeleton [20]. Non-flavonoids include phenolic acid derivatives, stilbenes, tannins and lignins [21]. In recent decades, tannin-rich plants extracts are becoming popular as additives in ruminant diets to improve the quality of animal products. Plant-derived tannins can be classified into hydrolyzable tannins and condensed tannins. Hydrolyzable tannins contain polyphenol nuclei having molecular weights from 500 to 3000 Daltons (Da), while condensed tannins are oligomeric or polymeric flavonoids comprising flavane-3-ols, including catechin, epicatechin, gallocatechin, and epigallocatechin with molecular weights ranging from 1000 to 20,000 Da [22]. The condensed tannins are not easily degraded by anaerobic enzymes and can depolymerize only with strong oxidation. Several reports which have documented the bioactive components of sumac have revealed hydrolysable tannins as the most prominent group of compounds in the Sumac fruits, followed by flavonoids and phenolic acids [23]. In their study, Abu-Reidah, Ali-Shtayeh [24] detected 211 compounds from methanol extract of sumac fruit samples, with majority belonging to phenolics compounds through an extensive and sophisticated chromatographic analysis. A similar study that employed methanol extract of sumac fruit samples, detected 191 compounds comprising 78 hydrolysed tannins, 59 flavonoids, 9 anthocyanins, and 40 other compounds such as butein [25]. In the case of sumac leaf, analysis of ethereal leaf extract using coloring method identified myricetin alongside gallic acid as the coloring agent of sumac leaves [7][26]. The flavonols quercetin, myricetin, and kaempferol alongside gallic acid, methyl gallate, m-digallic acid, and ellagic acid were identified from ethyl acetate and methanol extracts of sumac leaf samples [7]. Other compounds such as organic acids which include malic, citric, fumaric, and tartaric were also detected from the aqueous extract. Most of the compounds have been categorized into hydrolysed tannins, phenolic acids, conjugated phenolic acids, organic acids, anthocyanins, flavonoids, coumarins, xanthones, terpenoids, steroids, and essential oils.