+1 point
Thank you for your contribution! You can also upload a video entry related to this topic through the link below: https://encyclopedia.pub/user/video_add?id=26682
Check Note
2000/2000
DNA Double Strand Breaks in Developing Neuroretina

The existence of double strand breaks (DSBs) in the developing mouse retina is an inherent feature of the process and it is related to the early death that occurs during development. This early cell death facilitates the selection of the fittest neurons to complete the developing process successfully. In addition to the DNA repair mutants, which are clearly involved in the DSBs repair process, the fact that the rag2 endonuclease mutant also displays a similar phenotype suggests that this process may be at the basis of the somatic variability present in mammalian neurons

In the last decade, new single cell sequencing technologies have completely changed the understanding of neural DNA, revealing that almost all healthy individuals studied carry large numbers of neuron-specific genetic alterations, most of which require prior generation and repair of DNA double strand breaks (DSBs) [1][2][3][4][5][6][7][8]. This variability is far more frequent than ever expected. Single cell genomics has demonstrated somatic mosaicism in physiological contexts in more than 10% of neurons within a given individual, increasing to 90% in some studies [1][2][3][4]. These findings indicate that cell heterogeneity in the central nervous system (CNS) relies not only on transcriptional, morphological and functional diversity, but also on major, likely underlying, changes in neuronal DNA.
Neuronal DNA is enriched as a consequence of multiple genetic alterations in neural progenitor cells. Affected regions range in size from over 500 Mb to single nucleotides (single nucleotides variations, SNVs) (Figure 1). These major genetic alterations include indels (insertion/deletion), MEIs (mobile element insertions), CNVs (copy number variations), SVs (structural variants), and aneuploidy [9]. Advances in single-cell whole-genome sequencing have provided detailed information about smaller CNVs (<1 Mb) and have shown that these are very frequent in the developing cerebral cortex [10]. All these forms of somatic mosaicism require prior generation and repair of DNA DSBs, which in turn must be properly repaired to prevent programmed cell death of the affected neuronal cell.
This somatic mosaicism within neurons results in changes in their gene expression [11], although these changes do not necessarily affect neuronal connectivity or survival in the adult brain [12]. Particularly, aneuploid neurons have been found to be active and fully integrated in the normal adult mammalian brain [12][13]. Moreover, the recent discovery of abundant CNVs of <1 Mb revealed quantitative variation at particular developmental stages in the mouse cerebral cortex [10], suggesting that these alterations may constitute part of a process intrinsic to neural development.

Figure 1. Intrinsic events during early neurogenesis that may contribute to somatic mosaicism and functional diversity in the mature nervous system. In the nervous system, neuronal genetic diversity seems to arise intrinsically during early neuronal differentiation. Diverse genetic alterations have been observed in healthy neurons, most of them involving the generation and repair of DNA double strand breaks. The pool of neurons with cell-unique differences in their DNA could be even larger than the vast numbers of antibodies generated by the V(d)J recombination in the immune system [14]. During neuronal differentiation, more than 60% of the recently generated neurons undergo cell death events [15]. The surviving neurons, many of them carrying genetic alterations, may configure a functional repertoire characterized by the physiologically generated somatic mosaicism.

DSBs can result from extrinsic causes, including certain viruses, ionizing radiation, and chemical sources, or from intrinsic causes, such as reactive oxygen species produced by cellular respiration or replication fork collapse at genome fragile sites [16][17][18][19]. Alternatively, they can be a consequence of specific mechanisms and examples include programmed genome reorganization, such as RAG-1,2 endonuclease-mediated V(D)J somatic recombination, as it occurs in the immune system [20][21]. In the brain, DSBs can also be formed by specific mechanisms, such as retrotransposon mobilization (e.g., LINE-1 transposition in neural progenitors and mature neurons [22][23]) and RNA retroinsertion, as in somatic APP gene recombination [24]. Specific DSB generation mediated by endonucleases to control gene expression, as described for DNA topoisomerase II β (TOP2β) and Spo11 in the promotors of neuronal activity-induced genes [25][26][27], have also been shown.
DSBs constitute a potentially serious threat to cell survival and, therefore, must be properly repaired. DSBs are repaired by either homologous recombination or nonhomologous end-joining (NHEJ). NHEJ involves the direct ligation of the two DNA ends that frequently alter the original DNA sequence. A defective DNA damage response severely impacts nervous system development [28], and alterations in factors involved in the DSB response have been implicated in a range of diverse human syndromes, including neuropathology and neurodegeneration (e.g., ataxia telangiectasia) [29][30][31]. The importance of DSBs and their consequences for neurons are clearly evidenced by the phenotype of mice carrying DNA repair mutations. These mice present a marked, and in some cases lethal, embryonic phenotype, characterized by a high level of neuronal cell death, impaired development, and even acellularity in the central nervous system [15][32]. Indeed, mouse models with NHEJ mutations (e.g., XRCC4 and DNA lig IV) display a dramatic neural phenotype, in some cases with embryonic lethality [33][34], and severe immunodeficiency, although the remaining organs and tissues are largely unaffected, suggesting an important role of NHEJ in neural development.
Together, the neurogenic process provides an environment permissive to DSB generation and subsequent genetic alterations. The specificity of these neural DNA alterations is supported by the observation that genetic changes emerge specifically during in vitro stem cell differentiation towards neural lineage [3] but are completely absent during differentiation towards fibroblasts. This accumulation of DSBs during neural development suggests that neurons possess mechanisms to cope with DSBs, which may even have a particular function or be generated as a side-effect of another, as-yet-unknown process.

Several studies have shown that the number of neurons with somatic mutations decreases after development; both the number of CNVs per neuron [3] and the number of aneuploid neurons [35][36][37] are lower in the newborn and young adult brain than during embryonic development [9]. These observations suggest the involvement of cell death processes, which may selectively target non-viable mutations in a manner analogous to apoptosis following V(D)J recombination [38]. In fact, many authors, ourselves included, have shown that neural precursors and newborn neurons actually undergo a specific wave of apoptosis during early embryonic development [32][39][40][41][42]. Although the purpose of this early wave of neuronal cell death has not been clearly established, the findings in mutant models that lack apoptosis genes have underscored its importance. The dysregulation of cell death in this context specifically impairs proper CNS generation, affecting neural precursor cell proliferation and early neuronal differentiation [15][39][43]. Specifically, the dysregulation of cell death results in neural malformations including cerebral hyperplasia, exencephaly, and neural tube defects, as well as defective retinal structure and visual system connectivity [15][32][39][44][45][46].
Early neuronal cell death in the mouse retina parallels the onset of DSB generation (Figure 2), and that apoptosis occurs during a specific time window [47]. In the developing chicken retina, the onset of cell death is carefully programmed and intrinsically determined, specifically the death of newborn neurons is determined, in a cell-autonomous manner, by the time the neuron is generated and it is independent of the niche in which it was situated [48][49]. 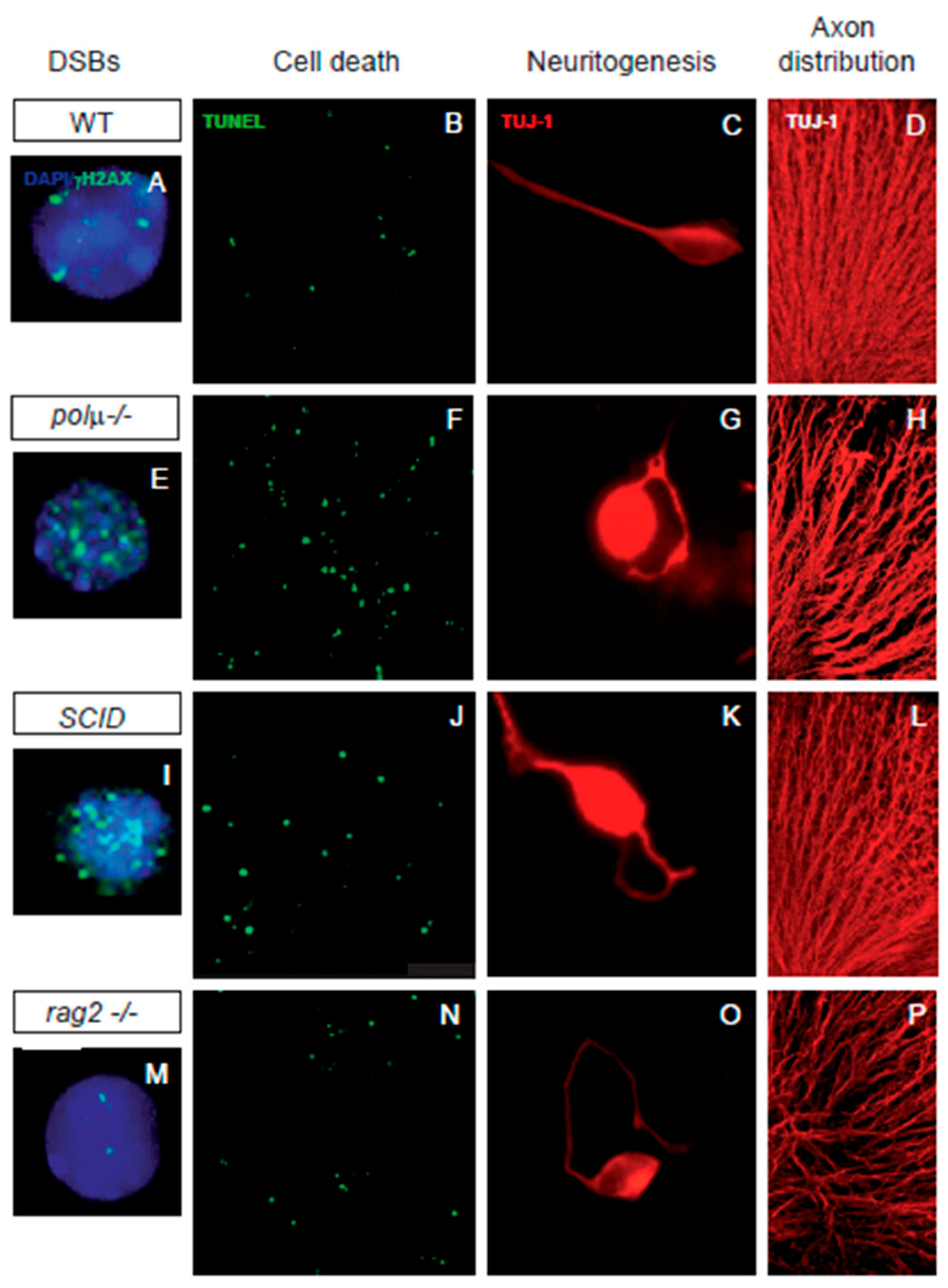 More
© Text is available under the terms and conditions of the Creative Commons Attribution (CC BY) license; additional terms may apply. By using this site, you agree to the Terms and Conditions and Privacy Policy.
Upload a video for this entry
Information
Subjects: Developmental Biology
Contributors MDPI registered users' name will be linked to their SciProfiles pages. To register with us, please refer to https://encyclopedia.pub/register :
Teresa Suarez
,
Noemi Alvarez Lindo
,
Enrique J J. de la Rosa
View Times: 66
Revisions: 2 times (View History)
Update Date: 06 Sep 2022
Table of Contents
1000/1000
Hot Most Recent