Submitted Successfully!
Thank you for your contribution! You can also upload a video entry related to this topic through the link below:
https://encyclopedia.pub/user/video_add?id=26538
Check Note
2000/2000
Peer Reviewed
Evolutionary Perspective on Improving Mental Health
Upload a video
This is a peer-reviewed entry published in Encyclopedia Journal, full entry can be found at 10.3390/encyclopedia2030099

Mental issues are by many considered the main challenge for health authorities in industrialized nations. In this entry, I discuss an approach that may prove useful for ameliorating the situation and thereby improving quality of life. The analysis uses an understanding of the brain based on evolution and neurobiology, so consequently the ideas presented differ somewhat from traditional psychological thinking. Briefly, it appears likely that the problems with psychopathology are partly due to a lifestyle at odds with human nature. The key for finding preventive measures then is to identify the contributing mismatches. Based on the present perspective, therapeutic interventions can be construed as altering the brain by exercising functions that ought to be strengthened. By understanding brain plasticity, and the functions that are likely to need improvement in relation to mental health, we stand a better chance at devising interventions that work.

brain exercise environmental discords evolution mental health neurobiology therapy well-being
Information
Subjects: Psychology
Contributor :
Bjørn Grinde
View Times: 481
Online Time: 26 Aug 2022
Mental disorders are arguably the worst health-related problem in terms of quality adjusted life years (QALY) and global economic burden [1]. According to estimates, close to half the population experiences a mental disorder during their lifetime, and 17–33% had a diagnosable condition in the last 12 months [2][3]. Anxiety and depression stand for a substantial share of the problems. The prevalence of diagnosable mental disorders may be just the tip of the iceberg; most likely, many more have reduced quality of life due to unnecessary worries and ruminations.
Anxiety and depression can be described as unwarranted activity in the fear and low mood functions of the brain, respectively. The activity of these functions presumably has a close-to-normal distribution in society (Figure 1). There is a somewhat arbitrary threshold for clinical diagnosis (the grey area in Figure 1). It seems unlikely that the present prevalence reflects the natural state for the human species, as one would expect these conditions to be selected against in ancestral populations [4]. A reasonable interpretation is that the situation is due to suboptimal aspects of the present environment. 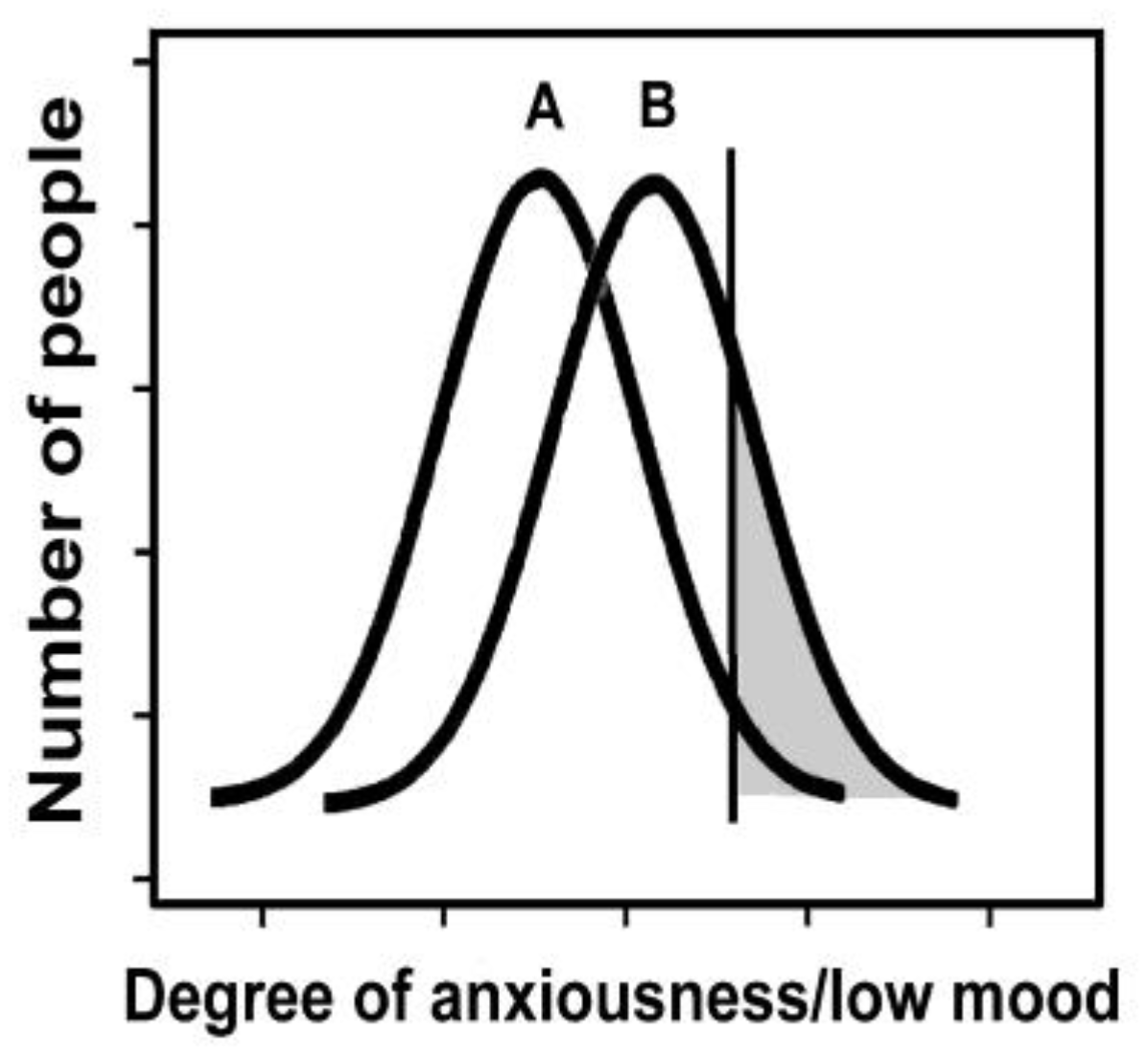 Figure 1. Theoretical distribution of fear and low mood. Above a more or less arbitrary cut-off (grey), the conditions are diagnosed as anxiety and depression, respectively. In an optimal environment (A), such as an ideal Stone Age situation, fewer people would be above the cut-off; while in a less healthy environment (B), which may include typical industrialized nations, more people suffer from these disorders.
I previously used an evolutionary perspective both to understand mental problems [4][5] and in categorizing psychopathology [6]. Other scientists have taken a similar approach [7][8][9][10][11]. I believe that this perspective offers relevant insight that may be missing in traditional psychological or psychiatric literature. In the present text, evolutionary biology is combined with current knowledge in neurobiology.
Mental health is typically related to two issues. One is a reduction in well-being, while the other involves difficulties with functioning in society. The two problems often appear together, but not always. A person struggling with anxiety can still function reasonably well, while people with Down syndrome and Williams syndrome require help, but appear to be happier than the average [12][13]. In affluent societies, we seem to do a reasonably good job at helping the disabled with practical aspects of life, which suggests that the main problem is to improve well-being.
Well-being and happiness are here used synonymously. The terms can be described as the mental part of quality of life. The concept covers contentment and subjective well-being, as well as both the hedonic (sensual pleasures) and eudemonic (human flourishing) aspects of gratification.
I shall focus on the well-being part of mental health for two reasons. One, as suggested above, is that this is where the shoe pinches in affluent societies; that is, most people with mental issues experience a suboptimal quality of life; and two, this is the issue that I believe has the greater potential for improvements. We can enhance well-being by creating an environment more suitable for mental development and by devising better therapeutic options. The problems related to functioning in society tend to be more deep-rooted, reflecting either brain deterioration (e.g., dementia) or unfavorable genes (e.g., schizophrenia [14] and Down syndrome). Although the practical needs of the sufferers can be taken care of, their handicaps are difficult to amend.
In the first part of the review, I describe a model of the brain that is suitable for the present purpose; the remaining text discusses approaches relevant to alleviating the problem in light of this model. Section 3 considers how society can move toward an environment better tuned to mental health. The fourth section is about therapeutic interventions; that is, how can we help people change in the direction of experiencing less pain and more happiness. The focus is on outlining an approach to mental health, rather than on offering an exhaustive list of options.

More
© Text is available under the terms and conditions of the Creative Commons Attribution (CC BY) license; additional terms may apply. By using this site, you agree to the Terms and Conditions and Privacy Policy.
Upload a video for this entry
Information
Subjects: Psychology
Contributor MDPI registered users' name will be linked to their SciProfiles pages. To register with us, please refer to https://encyclopedia.pub/register :
Bjørn Grinde
View Times: 481
Online Time: 26 Aug 2022
Table of Contents
1000/1000
Hot Most Recent