+1 point
Thank you for your contribution! You can also upload a video entry related to this topic through the link below: https://encyclopedia.pub/user/video_add?id=26326
Check Note
2000/2000
Role of Dysregulated miRNAs in Pathogenesis of AMD

Age-related macular degeneration (AMD) is an eye disease causing damage to the macular region of the retina where most of the photoreceptors responsible for central visual acuity are located. MicroRNAs (miRNAs) are small single-stranded non-coding RNA molecules that negatively regulate genes by silent post-transcriptional gene expressions. Studies have shown that changes in specific miRNAs are involved in the pathogenesis of eye diseases, including AMD. Altered expressions of miRNAs are related to disturbances of regulating oxidative stress, inflammation, angiogenesis, apoptosis and phagocytosis, which are known factors in the pathogenesis of AMD. Moreover, dysregulation of miRNA is involved in drusen formation.

Age-related macular degeneration (AMD) is an eye disease characterized by damage to the macular region of the retina responsible for central vision acuity [1]. It leads to progressive loss of central vision manifested as blurring or dark spots in the middle part of the visual field and inability to see fine details and colors clearly. AMD is typified by the appearance of drusen in the macula as well as choroidal neovascularization (CNV) or geographic atrophy [2][3]. In 2014 the prevalence of AMD in people aged 45–85 was reported to be 8.69%. Furthermore, the incidence of AMD is currently steadily increasing. It is estimated that by 2040 the number of people affected by AMD will increase to 288 million worldwide [4]. AMD remains one of the leading causes of blindness and moderate or severe vision impairment in individuals over the age of 50 years [5]. Although the pathogenesis of the disease is very complex, multifactorial and still not fully understood, it is known that chronic inflammation, oxidative stress and impaired angiogenesis, apoptosis and phagocytosis may contribute to the process [2]. Despite the last two decades having been groundbreaking in treatment of AMD due to the introduction of anti-VEGF injections and photodynamic therapy, to date, there are no effective treatments to prevent progressive irreversible degeneration of light-sensitive cells in the macula, especially in the atrophic form of the disease and the need for a new approach is crucial [3].
MicroRNAs (miRNAs) are small single-stranded non-coding RNA molecules negatively that regulate genes by silent post-transcriptional gene expressions [6][7]. They are present in all cell types and participate in cellular physiology, playing important roles in various biological pathways [8]. Changes in miRNA expression have been investigated in a variety of conditions, including cancers and gastroenterological, neurological or cardiac diseases [9][10][11]. Furthermore, previous studies have shown that specific miRNAs are involved in the pathogenesis of eye diseases, including AMD [12][13][14][15][16].
Aberrant expression of miRNAs in AMD has been confirmed, both in animals and in humans [17]. Altered expressions of miRNAs are related to disturbances of regulating oxidative stress, inflammation, angiogenesis, apoptosis and phagocytosis, which are known factors in the pathogenesis of AMD [8]. Moreover, dysregulation of miRNA is involved in drusen formation [18]. Thus, miRNAs may be used as potential molecular biomarkers for the disease and, furthermore, tailoring therapeutics to particular disturbances in miRNAs may, in the future, offer hope to prevent irreversible vision loss.

2. Influence of miRNAs on Angiogenesis in AMD Pathogenesis

Angiogenesis is known to be an important factor in the pathogenesis of AMD. Several miRNAs with significantly changed levels in patients with AMD are thought to be involved in this process. The angiogenic effect is achieved through different mechanisms enhanced by miRNAs’ modulation of physiological and pathological processes. Most miRNAs associated with pathological angiogenesis in AMD influence vascular endothelial growth factor (VEGF) signaling. miR-23 and miR-27 are proven to enhance angiogenic signaling by repression of their target mRNAs encoding antiangiogenic Sprouty2 and Sema6A proteins which negatively regulate MAPK and VEGFR2 signaling in response to angiogenic factors. It was shown that inhibition of these miRNAs impairs angiogenesis in vitro and postnatal retinal vascular development in vivo and suppresses laser-induced choroidal neovascularization in mice [19]. miR-205-5p decreases VEGFA levels through targeting VEGFA 3′UTR-mRNA and also can influence angiogenesis through phosphatidylinositol-3-kinase/protein kinase B—also known as Akt (PI3K)/PKB signaling transduction. Oxidative stress, which is an important factor in AMD, down-regulates miR-205-5p. Consequently, it can increase levels of VEGFA and enhance angiogenesis in AMD patients [20]. miR-106b also regulates choroidal angiogenesis and is decreased in the AMD model due to the unfolded protein response pathway of protein kinase RNA-like ER kinase. It down-regulates the expression of VEGFA and HIF1α. Moreover, it prevents migration of human retinal microvascular endothelial cells and sprouting—cellular processes involved in angiogenesis [21]. miR-93 represses angiogenesis by reducing mRNA and protein expression of VEGF and decreasing human microvascular-endothelial-cell proliferation. This was shown in the experimental laser-induced choroidal neovascularization mice model and human microvascular endothelial cell model [22]. miR-93 as well as miR-302d repress angiogenesis by decreasing VEGFA secretion through interrupting the transforming growth factor beta signaling pathway in ARPE-19 cells. They target TGFBR2 and inhibit transforming growth factor beta-mediated epithelial to mesenchymal transition [23]. Angiogenesis in the AMD seems to be repressed also by miR-126. The study performed in the laser-induced CNV mouse model proved that miR-126 decreases mRNA and protein levels of VEGFA, KDR and SPRED1. It was also shown on human microvascular endothelial cells that up-regulation of miR-126 reduced endothelial cell-tube formation and VEGF-induced migration [24]. miR-302d-3p targets p21Waf1/Cip1, which promotes VEGFA secretion by retinal pigment epithelium (RPE) cells and tube formation of HUVECs, leading to increased choroidal neovascularization [25].
Several miRNAs were shown to influence angiogenesis through pathways independent from VEGF. It is suggested that miR-24 represses angiogenesis by simultaneously regulating multiple components in the actin cytoskeleton pathways. It exerts an inhibitory effect on actin skeleton dynamics, and represses endothelial cell migration, proliferation and angiogenesis by targeting proteins downstream of Rho signaling, including LIMK2, PAK4 and DIAPH1 [26]. It was documented that hsa-mir-361-5p represses angiogenesis through the TGF-β and mTOR pathways. Tube formation assay performed in vitro with antisense treatment of hsa-mir-361-5p revealed significant increase in angiogenesis. It is suggested that hsa-mir-424-5p and hsa-mir-301a-3p have similar effects [27]. miR-150 regulates the transition of macrophages to the AMD-phenotype, leading to macrophage-mediated inflammation and pathologic angiogenesis by down-regulation of stearoyl-CoA desaturase-2 (Scd2) that is independent from VEGF [28]. Summary of miRNAs involved in angiogenesis pathways related with AMD can be found in the Figure 1. 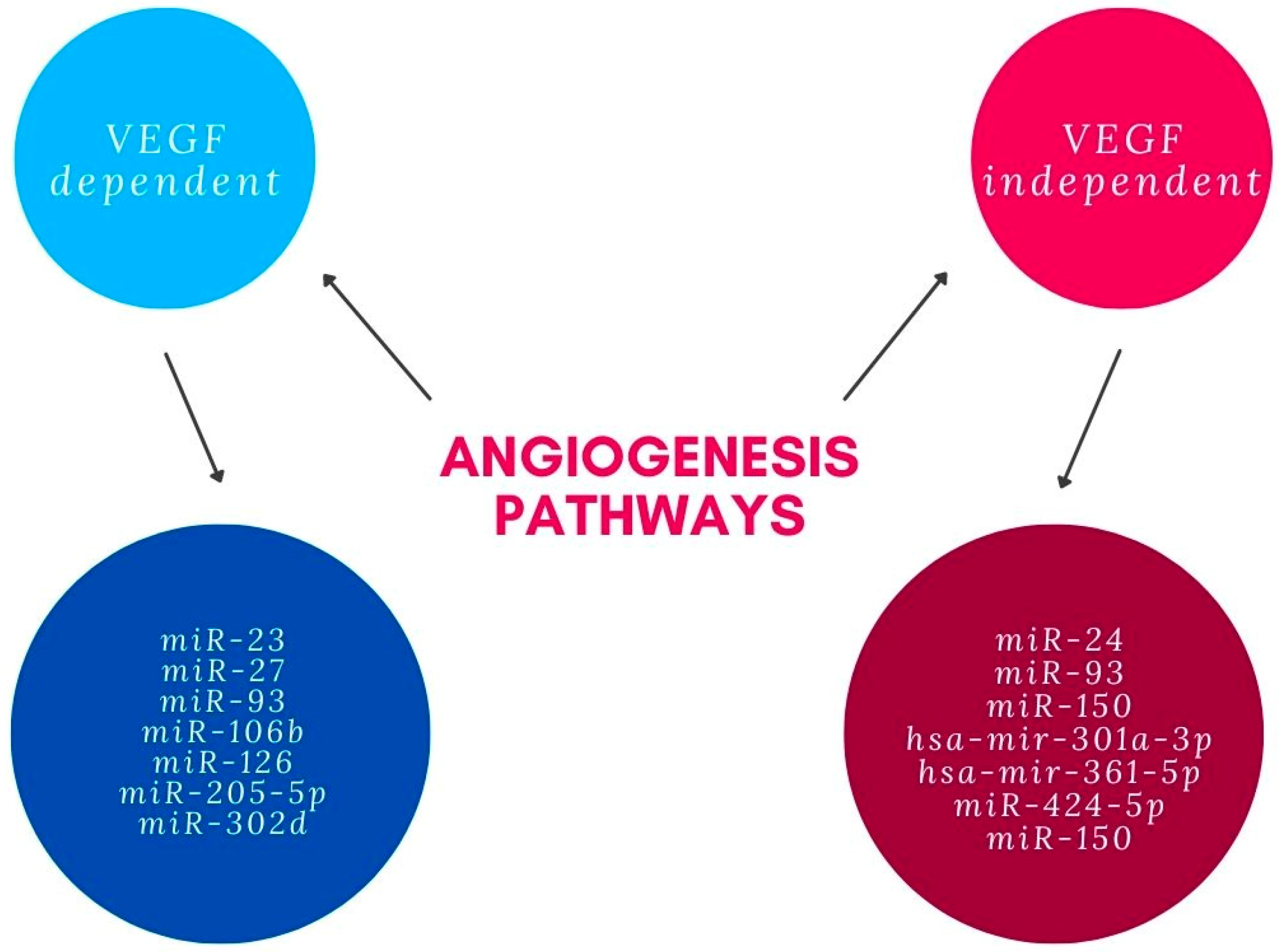 3. Influence of miRNAs on Phagocytosis in AMD Pathogenesis

Another important factor in AMD pathogenesis is a disturbance of phagocytic mechanisms, which impairs clearance of Aβ42-peptides from the extracellular space and leads to the formation of drusen [18]. miR-34a was shown to target and repress TREM2 (triggering receptor expressed in myeloid/microglial cells-2) mRNA which is a prominent sensor-receptor of Aβ42 peptide monomers involved in its phagocytosis and homeostatic clearance. Down-regulation of TREM2 leads to the impairment of microglial cells to phagocytose Aβ42 peptide monomers in the central nervous system (CNS) and the formation of drusen. It was also noted that NF-kB and oxidative stress induce repressive influence of miR-34a on TREM2 [29]. The study performed on RPE cells in the two model rats indicated that miR-24 enhances autophagy by targeting and inhibiting CHI3L1, which activates both AKT/mTOR pathways and ERK signaling [30]. Another miRNA involved in the process of phagocytosis is miR-29, which was shown to enhance autophagy by down-regulating p18 and mitigating subsequent lysosomal recruitment of mTORC1. It also repressed p85α, which leads to Akt/mTOR inhibition and promotion of autophagy. Its action is transcription-independent, as was demonstrated with subcellular fractionation [31]. A study measuring photoreceptor outer segments uptake in ARPE19 showed that miR-184 enhance phagocytic activity in human RPE. This is due to down-regulation of a cytoplasmic peripheral membrane protein EZR and increasing LAMP-1 expression. The molecular interaction of EZR with LAMP-1 is required for the formation of phagocytic vacuoles. Inhibition of miR-184 reduces their interaction, and therefore inhibits the formation of phagocytic vacuoles and impairs phagocytic activity, what can possibly lead to development of AMD [32].

4. Influence of miRNAs on Apoptosis in AMD Pathogenesis

Apoptosis of retinal cells under oxidative stress conditions is an important factor in AMD pathogenesis. miR-1246 was shown to have a significant role in the inhibition of this process. A peptide thought to protect RPE cells from apoptosis induced by oxidative stress is mini-αA. Inducted expression of the proteins involved in the process of apoptosis, caspase-3 and caspase-14, was reported in the cells incubated with NaIO3. miR-1246 was shown to target these proteins, reduce their levels and thus mediate the anti-apoptotic effect of mini-αA on RPE cells [33]. Another miRNA that protects RPE cells from oxidative injury and apoptosis is miR-626. It targets and down-regulates kelch-like ECH-associated protein 1 (Keap1). Keap1 promotes ubiquitination and proteasomal degradation of nuclear-factor-E2-related factor 2 (Nrf2) through a Cul3-ubiquitin ligase complex. Nrf2 promotes transcription of multiple anti-oxidative genes and detoxifying enzymes. miR-626 levels were shown to be decreased in AMD patients, thus this mechanism of RPE cell protection seems to be an important factor in AMD pathogenesis [34]. hsa-miR-144, which is down-regulated under oxidative stress in RPE, was shown to target and regulate NRF2, which leads to higher RPE cell survival [35].
Fas—an apoptotic factor that activates apoptosis signaling and P53 pathways—is a common target for miR-23a and miR-374a. Pathologic conditions such as oxidative stress lead to an increase in FasL/Fas expression; accordingly, an increased level of Fas was reported in AMD patients and results in RPE apoptosis. At the same time, it was shown that miR-23a and miR-374a are down-regulated in AMD patients’ plasma. miR-23a and miR-374a inhibit Fas up-regulation under oxidative conditions; thus, their overexpression makes RPE cells resistant to oxidative-stress-induced cell death, caspase-3 activity and DNA fragmentation [36][37].
Apoptosis of RPE cells in the pathogenesis of AMD may be caused not only by oxidative stress but also by lipopolysaccharide (LPS). Expression of miR-21-3-p triggered by LPS was shown to take part in the regulation of LPS-induced inflammation and apoptosis. miR-21-3p targets and inhibits RGS4, which leads to aggravation of inflammation and apoptosis by enhancement of LPS-induced production of inflammatory cytokines IL-6 and MCP-1 [38]. Yet another mechanism to induce apoptosis of RPE cells in which miRNA is involved is through exposure to ultraviolet B (UVB) light. miR-340, whose expression is induced by UVB irradiation, was shown to target and inhibit iASPP—an inhibitory factor of p53—and thus to promote apoptosis of RPE cells and suppress cell viability via affecting p53, p21 and caspase-3 protein expression [39].

5. Influence of miRNAs on Inflammation and Oxidative Stress in AMD Pathogenesis

Due to high demand of oxygen in the macula region, RPE cells are particularly exposed to oxidative stress, which is one of the determinants of development and progress of AMD. Chronic inflammation, oxidative stress and lipid deposition are also involved in AMD development [2]. miR-146a is under transcriptional control by NF-κB. It has also been stated as up-regulated by ROS and pro-inflammatory cytokines [40]. Up-regulation of miR-146a promotes development of the disease by down-regulating the complement factor H, which represses inflammatory response [41]. The miR-34a molecule has a regulative role in metabolism of lipoproteins. Specifically, it modulates production of apolipoprotein B (apoB)-containing lipoproteins in the liver [42]. Its molecules are over-expressed in RPE and the retina of mice. It can be presumed that miR-34a down-regulates secretion of apoB in RPE, which dysregulates cellular lipid metabolism. This dysregulation causes deposition of lipids in RPE, which is one of the contributors to AMD development [43][44]. Further research is needed to specify if effects of miR-34a are a possible AMD treatment target. miR-27a was determined as oxidative stress miRNA. It is crucial to determine how miR-27a affects RPE cells by prooxidants. As is known from previous research, overexpression of miR-27a correlates negatively with expression of forkhead box protein O1 (FOXO1). The damage to the retina was aggravated in the FOXO1 gene-knockdown and miR-27a-overexpression groups after exposure to LED but was alleviated in the FOXO1 gene-overexpression or miR-27a-knockdown groups [45]. Figure 2 presents the pathways related with AMD pathogenesis and miRNAs that may influence them. Summary of the most frequently dysregulated miRNAs and their role in AMD pathogenesis can be found in the Table 1. 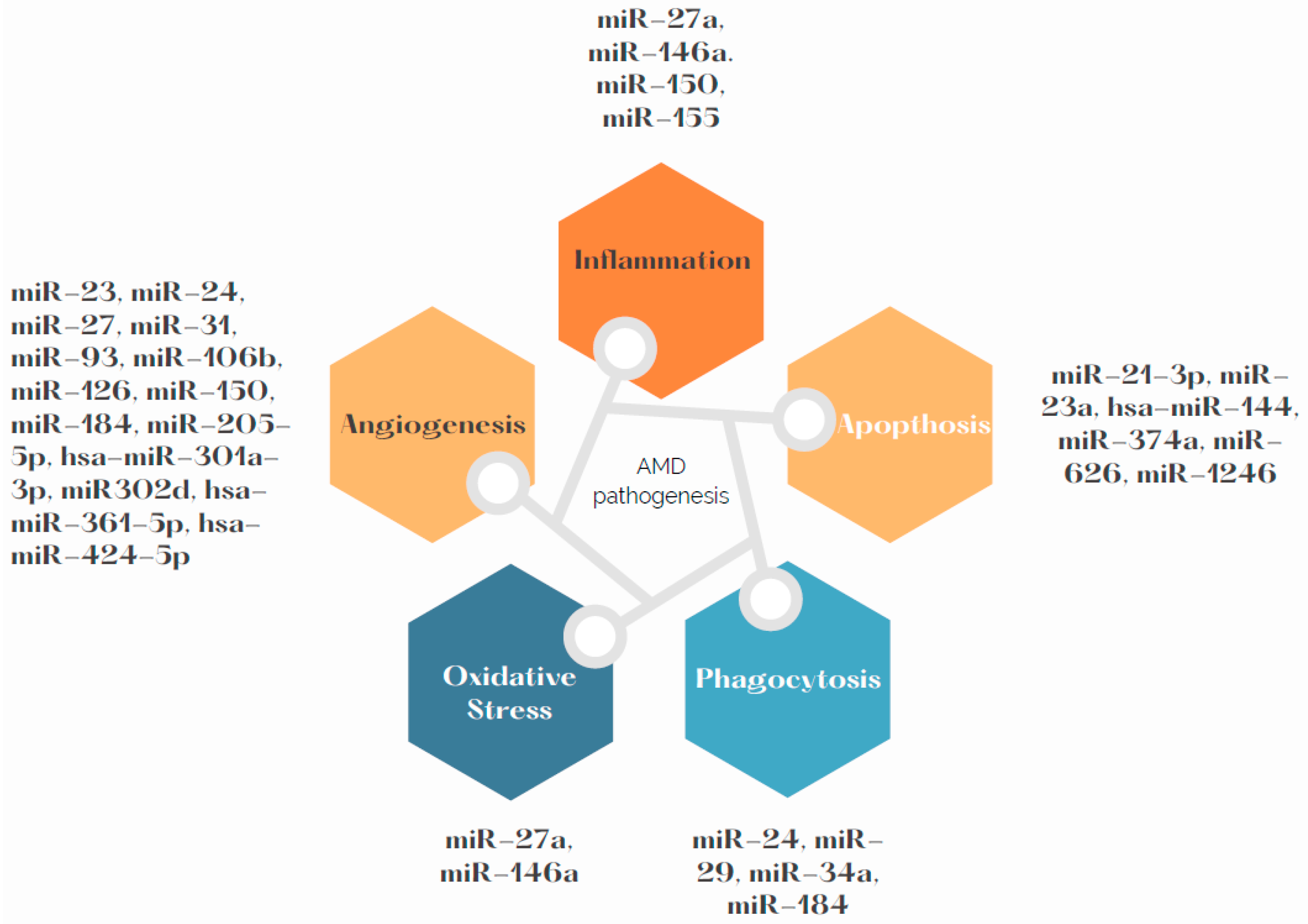