Submitted Successfully!
Thank you for your contribution! You can also upload a video entry related to this topic through the link below:
https://encyclopedia.pub/user/video_add?id=2627
Check Note
2000/2000
Biomimetic ECM-based 3D muscular scaffolds
Edit
Upload a video
This entry is adapted from 10.3390/nano10101986

Severe muscle injuries are a real clinical issue that still needs to be successfully addressed. Tissue engineering can represent a potential approach for this aim, but effective healing solutions have not been developed yet. In this regard, novel experimental protocols tailored to a biomimetic approach can thus be defined by properly systematizing the findings acquired so far in the biomaterials and scaffold manufacturing fields. In order to plan a more comprehensive strategy, the extracellular matrix (ECM), with its properties stimulating neomyogenesis and vascularization, should be considered as a valuable biomaterial to be used to fabricate the tissue-specific three-dimensional structure of interest. The skeletal muscle decellularized ECM can be processed and printed, e.g., by means of stereolithography, to prepare bioactive and biomimetic 3D scaffolds, including both biochemical and topographical features specifically oriented to skeletal muscle regenerative applications. This paper aims to focus on the skeletal muscle tissue engineering sector, suggesting a possible approach to develop instructive scaffolds for a guided healing process.

Tissue engineering has usually been considered a promising applicative option to address urgent and critical clinical needs. Moreover, systems biology techniques can further support the collection of the desired output by developing physiologically relevant bio-engineered tissues [3]. The potential of these multidisciplinary approaches can pave the way to the definition of novel and original medical and surgical protocols capable of overcoming most of the drawbacks elicited by conventional therapies, such as functional impairment, reduced movement ability, severe immune response risks and high costs [1][2]. Such an expectation has driven almost all the investigations published so far aimed to design suitable scaffolds to actually promote muscular regeneration, closely mimicking the morphological, biochemical and functional properties of the specific natural extracellular matrix (ECM) [4][5][6]. This is a keypoint of the classic tissue engineering paradigm in which the scaffold acts as a temporary ECM, providing all the instructive cues guiding the formation of the autologous tissue, and is capable of remodeling according to the physiological processes of the host. Clearly, this outcome should avoid the typical limitations related to tissue/organ transplantation and conventional implantable prostheses, such as the lack of growth and integration [7][8].

In this regard, the challenge of tissue engineering is highly demanding, and the design of ad hoc scaffolds has to be accurately performed in order to offer a valid alternative. In particular, SM comprises bundles of long, highly aligned, striated, multinucleated fibers organized in a hierarchical manner within the ECM. Thus, a parallel-aligned structure, which implies dealing with an anisotropic tissue that contributes to influencing cellular orientation and maturation, should provide an overall replication of the physiologic microenvironment, as this is pivotal when seeking to develop an engineered biomimetic muscle. Thus, the selection of both peculiar materials and fabrication techniques that support the realization of a three-dimensional microarchitecture similar to that of the SM ECM plays a major role is providing functional engineered muscle tissues. However, these starting design considerations are just a partial solution to a large-scale problem. It is well-known that microstructure, stiffness and porosity, to mention only the most common and controllable features, represent the first input for dictating cell response. However, it is also known that this condition may be insufficient to promote the desired biological outcome. Dealing with a comprehensive tissue engineering protocol underlines, therefore, the necessity of developing a biomimetic approach to preparing an integrated materials/cells/signaling construct that orchestrates a univocal result. For this aim, several proposals targeted at muscle regeneration have already been presented, focusing on (i) the materials, synthetic and natural ones, and their combinations [5][6][9], (ii) the fabrication techniques to evaluate their role on scaffold morphology and properties [10][11][12], (iii) the surface functionalization [13], (iv) the cells to be used, stem cells or already committed [6][10], (v) the addition of different nanomaterials to deal with constructs responsive to electrical, magnetic and photothermal stimulation [14] and (vi) the methods to specifically induce vascularization, innervation and contractility [10][13]. More than interesting and promising findings have been reported; however, the proper cellular microenvironment to bioengineer the SM construct has not, to date, been found, and there is still a clinical need to introduce new strategies that can facilitate safe and large muscle tissue repair and regeneration [13]. This work, therefore, proposes a possible technical/functional approach for designing and preparing suitable biomimetic scaffolds for SM regeneration, starting from the experimental findings collected so far and focusing on decellularized ECM to be used as a starting biomaterial for bioprinting and stereolithography.

The treatment of severe muscle injuries can be an investigational field in which the synergic potential of dECM and stereolithography might support the development of an effective biomimetic scaffold. Indeed, stereolithography could close the loop, allowing the fabrication of a scaffold with the characteristic dimensions, alignment and orientation of the muscle fibers. A similar approach can pave the way to the development of scaffolds substantially made of the tissue-specific “biomaterial”. Moreover, it can be assumed that such a solution could be characterized by extreme biocompatibility and valuable matching properties with the biological environment. Furthermore, with the use of physiological datasets (histological images, SEM micrographs or medical images) and computer-aided design (CAD) to model scaffold fabrication, stereolithography can allow creating scaffolds with precise tissue architectures [15]. The output of medical imaging can effectively support the accurate definition of a scaffold resembling the target tissue in order to provide, e.g., stability and flow transport as peculiar properties of the extracellular microenvironment. The integration of an information-driven design and CAD-based micromanufacturing approach has been previously highlighted, reviewing a number of solutions from different fabrication techniques, always referring to the ECM characteristics to be reproduced [16]. This approach, for instance, was considered for preparing 3D printed devices for neural regeneration starting from magnetic resonance imaging, computed tomography, and/or 3D virtual visualization to acquire topological data for the tailored production of structures that match the injured microenvironment, a promising methodology for patient-specific implants [17]. Similar considerations can be presented regarding the orthopedic field in which imaging data can pave the way for personalized treatment [18]. However, it should be underlined that most of the solutions proposed so far are generally focused on large defects treated with scaffolds that may not finely reproduce the ultrastructure of the tissue to be healed. In this regard, the use of morphological images with micro/nano details of the tissue of interest (such as histological images and/or SEM micrographs) [19] could allow the development of biomimetic structures, resembling the natural ECM and can actually provide a step forward in the definition of novel therapeutic protocols. In this regard, the design-oriented process implementing stereolithography can start, for instance, from histological images or scanning electron micrographs of muscle fibers to be considered as the architectural structure to be 3D printed. Following this suggestion, Figure 1 shows the planning approach to prepare a scaffold aimed at resembling the fiber morphology and packing density of an SM structure. In this regard, the proposal elaborates histological observations to design aligned fibers reproducing the muscle cross-section. Moreover, considering that SM fibers appear striated due to the sarcomeres alignment, two other scaffolds could be considered: a scaffold composed of organized parallel, aligned and striated fibers (as control) (Figure 1B) and a scaffold composed of striated fibers organized as in the SM structure (Figure 1C). These latter options can represent a simplified version of the SM scaffold, which can further support the optimization of the design process towards the final applicative proposal. 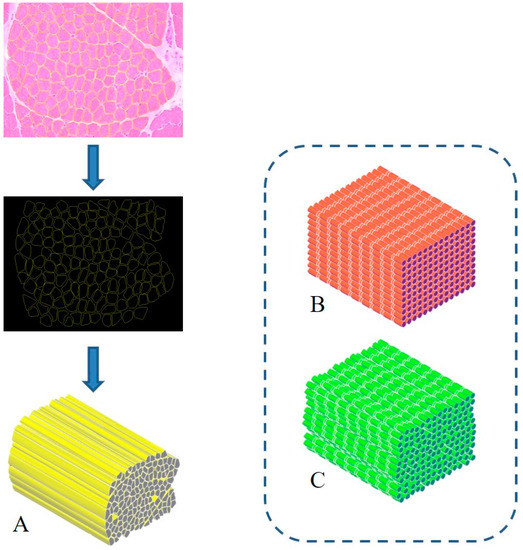 Figure 1. Biomimetic design of scaffold for skeletal muscle (SM) tissue engineering. A three-dimensional bioactive construct can be fabricated thanks to stereolithography, resembling the muscle structure and including SM decellularized extracellular matrix (dECM) (A). Similarly, a simple (B) and a more realistic (C) control case can be developed, mimicking the striated structure.

In addition, to complete the design stage, computational models can be proposed as a means to investigate and predict either the fluid dynamics and the mechanical response in a simulated relevant environment, e.g., a bioreactor or physiological conditions. However, several requirements should be accomplished in order to deal with a realistic solution in terms of, for instance, experienced shear stress, mass transport phenomena and local stiffness properties. This implies an accurate validation step, which depends on the implementation of biological data as input and numerical physiological matching output, supported by high-performance computing resources.

Such an approach can lead to an effective tissue-engineered construct combining most of the requirements needed for a substantial biomimetic investigation. The possibility of resembling the tissue microarchitecture according to physiological datasets, of modeling the printing input to be fabricated by means of tissue-specific biomaterials and ad hoc 3D printing techniques capable of assuring the scaffold resolution can then actually allow to mimic SM tissue and address the crucial issue of severe muscle injuries. More refined solutions can obviously be considered, but the different manufacturing alternatives within the stereolithography sector can usefully and promptly realize this kind of substrate. Hydrogel formulation, light source type and power, exposure time and patterning strategy concur to modulate the final mechanical characteristics to match those of the physiological site of implantation.

Therefore, a rational and comprehensive plan should be developed that includes and further exploits all the keypoints here addressed: (i) the selection of the material(s) to formulate the hydrogel to be processed, combining dECM, cells and possibly other polymers; (ii) the CAD input for the stereolithography setup, taking advantage of the resolution and accuracy of the technique that can actually allow collecting scaffolds morphologically and functionally similar to the natural ECM; and (iii) the implementation of the most suitable fabrication methodology, e.g., single- or two-photon stereolithography.

More
© Text is available under the terms and conditions of the Creative Commons Attribution (CC BY) license; additional terms may apply. By using this site, you agree to the Terms and Conditions and Privacy Policy.
Upload a video for this entry
Information
Subjects: Materials Science, Biomaterials
Contributor MDPI registered users' name will be linked to their SciProfiles pages. To register with us, please refer to https://encyclopedia.pub/register :
Silvia Baiguera
View Times: 159
Revisions: 2 times (View History)
Update Time: 21 Oct 2020
Table of Contents
1000/1000
Hot Most Recent