+1 point
Thank you for your contribution! You can also upload a video entry related to this topic through the link below: https://encyclopedia.pub/user/video_add?id=26023
Check Note
2000/2000
Zeolite/Pharmaceuticals System

Zeolites belong to aluminosilicate microporous solids, with strong and diverse catalytic activity, which makes them applicable in almost every kind of industrial process, particularly thanks to their eco-friendly profile. Another crucial characteristic of zeolites is their tremendous adsorption capability. Therefore, it is self-evident that the widespread use of zeolites is in environmental protection, based primarily on the adsorption capacity of substances potentially harmful to the environment, such as pharmaceuticals, pesticides, or other industry pollutants. On the other hand, zeolites are also recognized as drug delivery systems (DDS) carriers for numerous pharmacologically active agents. The enhanced bioactive ability of DDS zeolite as a drug carrying nanoplatform is confirmed, making this system more specific and efficient, compared to the drug itself. These two applications of zeolite, in fact, illustrate the importance of (ir)reversibility of the adsorption process.

1. Zeolites in the Removal of Pharmaceuticals from the Environment

Wide applications of pharmaceuticals, which are defined as substances used in the diagnosis, treatment, or prevention of disease and for restoring, correcting, or modifying organic functions, have contributed to the incredible improvement of human health and raised the quality and length of life to a great extent [1]. The most recent example is the explosion of the use of pharmaceuticals during the SARS-CoV-2 pandemic, in the treatment, but also in the prevention and diagnosis of diseases on a global scale. Despite the many benefits of modern medicine, its usage is a double-edged sword, because of the fact that a significant percentage of drugs used will end their journey in the environment.
In addition to frequently administered drugs like antidepressants, lipid-lowering agents, β-blockers, etc., very often investigated the occurrence of antibiotics, and non-steroidal anti-inflammatory drugs-NSAIDs and their residues in wastewater [2][3]. Although antibiotics levels are ng/L to µg/L, they are considered toxic compounds which contribute to the evolution of antibiotic-resistant bacteria and genes [4][5].
Ciprofloxacin, azithromycin and cephalexin, as frequently administered drugs, are suitable as markers of antibiotic pollution of the aquatic environment [2]. Interestingly, the effects on aquatic systems of birth control pills or better defined, endocrine-disrupting chemicals, are the subject of numerous reported studies for more than 40 years [6].
Excretion is the dominant way that drugs reach the environment, sometimes in their parent form or as metabolites. The environment’s physicochemical and bioconversion of excreted pharmaco-active compounds, which occurred after their biotransformation pathways, give as a result various and sometimes unpredictable products [7]. The fate of pharmaceuticals in the aquatic environment is therefore a very attractive field of study [8]. Although pharmaceuticals are generally considered as susceptible to diverse transformation reactions, the resulting products are often very stable. Such transformed hydrophilic compounds easily pass-through sewage treatment plants [9]. Anyway, the drugs of even the same pharmacology active groups possess a variety of non-predictable excretion rates, with considerable impact to the aquatic environment [10].
The importance of inadequate disposal of discarded drugs should not be neglected, although this area is officially regulated in most countries [11].
Luckily, this topic is nowadays under the watchful eye of scientists, and water is an environment of interest for monitoring pharmaceutical levels, as well as the resulting impacts it leads to. Focus is placed on surface water samples, sewage treatment plants, and drinking water [12][13][14].

1.2. Examples of Effective Removal of Pharmaceuticals with Zeolites

The procedures for removal of pharmaceuticals from the aquatic environment are numerous and more and more innovative. For example, pharmaceuticals can be removed from wastewater by biological processes, hydrodynamic cavitation and ultraviolet light treatment [15]. Besides the general approach, it is usually necessary to create a specific action toward targeted compounds.
Although the conventional procedures, like an advanced oxidation, hydrolysis, and photo-degradation, are usually an efficient way for removal of pollutants, these strategies applied to pharmaceutical rich waters, such as hospital waste effluents or pharmaceutical industries are, can potentially cause environmental and health harmful products [16][17], and must be considered in detail [18].
Among numerous attempts, the use of zeolite for water purification from pollutants was highlighted as a simple, efficient, low-cost, and eco-friendly procedure. Zeolites (either in pristine or modified forms), are well-known materials for the adsorption of pesticides from wastewaters [19][20][21][22][23].
The most important characteristic of zeolite for this application is its adsorption ability. The efforts of scientists in this field are focused on finding materials with improved adsorption capacities, appropriate kinetics, and examining the reversibility of the adsorption process, as well as the possibility of reuse.
First, investigations often start with neat structures, to elucidate key parameters, such as Si/Al ratio, surface area and extra-framework ions. The experimental design relies on sample loading optimization; however, the practical approach imposes the use of low loadings to boost adsorption capacity. To participate in this quest, researchers sometimes report loading that exceeds the starting adsorbent amount several times, although this has no physical meaning. Another challenge is to detect important parameters for efficient removal of environmentally significant concentrations, which are often for pharmaceuticals at the ng/mL level. Such a low concentration masks real adsorbent performance, and lab research usually employs mg/L concentration to boost experimental sensitivity [24].
A search of the literature can reveal the published results of testing a large number of zeolite structures with the aim of testing their ability to remove drugs, i.e., their adsorption from wastewater. Table 1. gives the most explored types of zeolites for this purpose.
Table 1. Some types of zeolites.
Among different zeolites, the FAU framework is especially present for wastewater treatment due to its substantial adsorption capacity toward different molecules. Additionally, in some cases there is no need for functionalization, and commercially available zeolite can be readily employed. Following its beneficial adsorption behaviour, FAU zeolite has been so far employed for the removal of sulfonamide [25][26] and fluoroquinolone antibiotics [27][28]. A special study was dedicated to the macrolide class representative, azithromycin removal by FAU zeolite [29]. Another reason for FAU selection lies in its fast kinetics, which takes up to several minutes for half an hour, which is of utmost importance for environmental application. Antibiotics are often oxygen and nitrogen-rich compounds whose main mechanism of interaction with the zeolite surface is hydrogen bonding. If this is the case, it is necessary to examine pH effects on the adsorption process [29]. Scheme 1 illustrates the drug removal by zeolites. 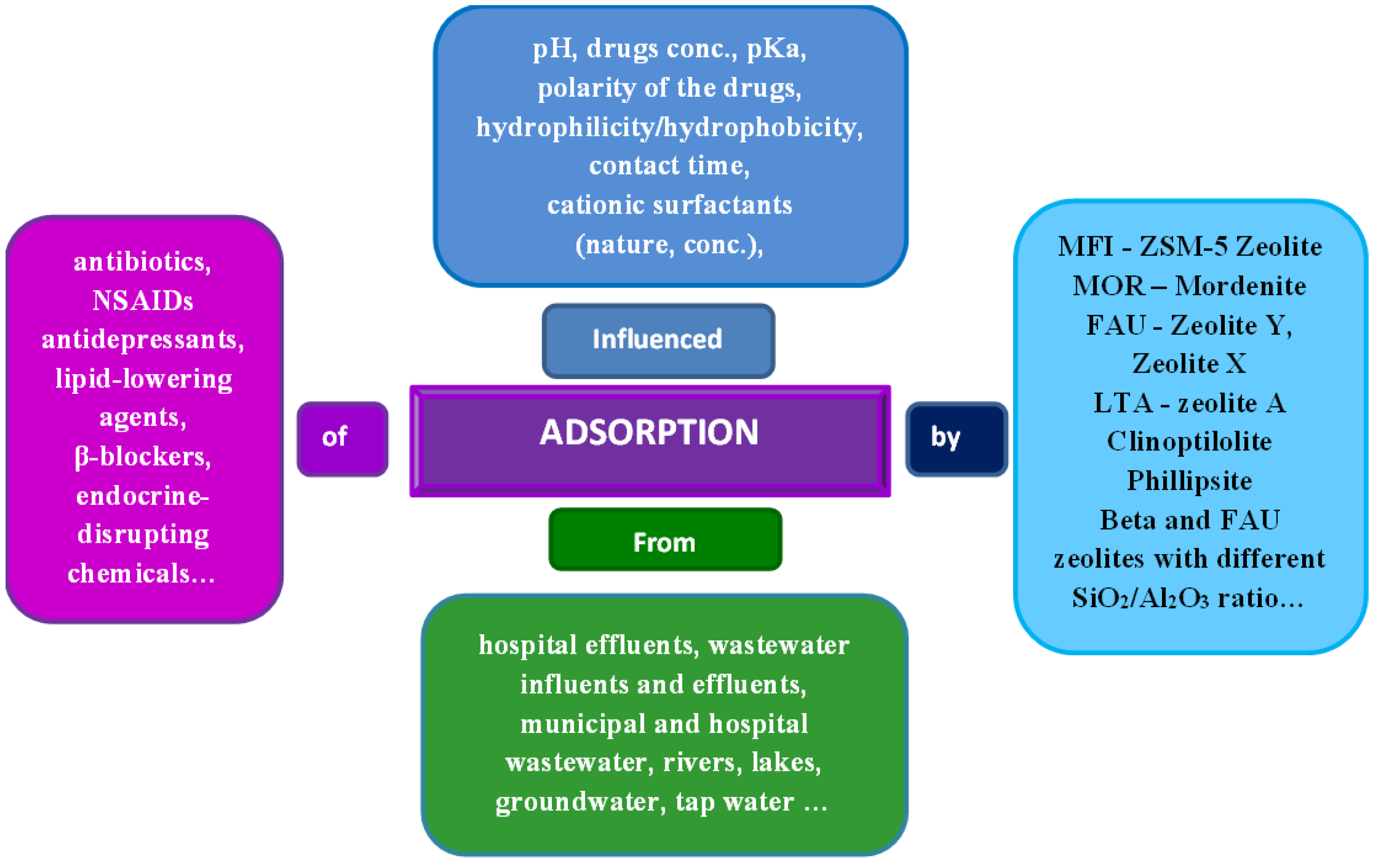 The biocompatibility and mechanical strengths of zeolite make them suitable for biomedical application as pharmaco active compounds or as biomaterial used for dental fillers, bone grafts, implant coating, or as a drug carrier agent [45].
An illustration of the positive example of application of zeolites themselves in pharmacotherapy is clinoptilolite which can stand out as a potent detoxifying, antioxidant, and anti-inflammatory agent [46][47]. Zeolites are currently regarded as dietary super-materials [46], and this, sometimes, is an overstatement. Every drugstore is selling zeolite-based nutritional formulations enhanced with vitamins, enzymes, etc., often without any scientific basis to support the claims of high nutritional benefits. Antioxidant, antimicrobial, detoxifying, and anticancer activity is often attributed to both synthetic and natural zeolites. However, a strict survey of the available literature gives somewhat controversial findings. For instance, zeolite’s ability for trapping radical species in order for them to be safely removed from the body is a cornerstone of many studies [48]. A part of this is actually true, zeolite structure does enable radical species removal [49][50], although they shouldn’t be a part of a human diet in spite of being used for cattle because tightly bind mycotoxins from animal feed in the gastrointestinal tract and thereby decrease their bioavailability [51]. Concerning this, Ipek et al. assessed the effect of natural zeolite, clinoptilolite supplementation on the oxidative status in cows and concluded that it did not support cow’s systems against oxidative stress [52].

2.2. Zeolites as Drug Carriers in Pharmacotherapy

The next logical step in the medical application of zeolites was their usage as drug carriers. That idea was surely provoked by two main groups of reasons. The first one is the reversibility of the adsorption of pharmaceuticals by zeolites, and which requires thorough studying of many important factors which influence this process. The focus, for sure, must be put on the ability to control and prolong drug release.
At the same time, scientists have made great efforts to exploit the possible synergistic bioactivities of zeolites with applied drugs. The resulting effects are often unpredictable and require detailed study, especially when cytotoxic effects on fibroblasts and tumour cells are performed in parallel.
The application of zeolites in biomedicine, as drug carriers, is based on their large specific surface area, high adsorption capacity [75], biocompactness, low toxicity [76], and microporous structure, which allows drug encapsulation within the zeolite and the ability to control and prolong drug release. Drug release is monitored in liquids with different pH values that correspond to the pH of the regions through which the drug-loaded zeolite carrier passes [77]. Drug encapsulation in drug delivery systems (DDS) eliminates side effects while maintaining treatment effectiveness [78], reduces drug concentration, and provides targeted delivery [79].
Zeolite nanocarriers enable drug delivery to a specific target and drug release without affecting surrounding healthy cells [80], and they display enhanced permeability, controlled drug distribution, and prolonged life in the blood system [81]. Synergistic effects of zeolites, such as gastroprotective influence, especially in the case of clinoptilolite DDS, could be ascribed to zeolites ability to attach to hydrogen ions and biologically active amines and nitrates [82].
The differences between the zeolite pore size and the targeted drug, and in hydrophilicity between zeolites and drugs, which are usually considered as limitation in their loading capacity, can be improved by surface modification of the zeolite [83], with the aim to adjust the surface of a zeolite depending on the delivered drug characteristics.
The efficiency of zeolites as DDS can be improved by the adsorption of cationic surfactants on the surface of zeolites through ion exchange and hydrophobic interactions, leading to the formation of monolayers or bilayers, depending on their concentration [84]. It looks that very important role here concerns the concentration of the cationic surfactant in relation to external cation exchange capacity—ECEC value, confirmed by the research performed on the natural zeolite with high clinoptilolite content with different levels of cetylpyridinium chloride (CPC) [85]. If the surfactant loading level was equal to ECEC, a monolayer of the organic phase is present at the zeolitic surface. When the amount of the CPC was above the ECEC value, a less extended bilayer is formed, while the sample with the highest surfactant content ordered bilayer or admicelles exist at the zeolitic surface. Similar results, obtained for the cationic surfactant-hexadecyltrimethylammonium bromide (HB) showed proportional increase of drug adsorption by increasing the amount of surfactant used for zeolite modification, leading to interactions between DS and HB at the zeolitic surface [86].