Submitted Successfully!
Thank you for your contribution! You can also upload a video entry related to this topic through the link below:
https://encyclopedia.pub/user/video_add?id=25918
Check Note
2000/2000
Halogen-Doped Carbon Dots: Synthesis, Application, and Prospects
Edit
Upload a video
This entry is adapted from 10.3390/molecules27144620

Carbon dots (CDs) have many advantages, such as tunable photoluminescence, large two-photon absorption cross-sections, easy functionalization, low toxicity, chemical inertness, good dispersion, and biocompatibility. Halogen doping further improves the optical and physicochemical properties of CDs, extending their applications in fluorescence sensors, biomedicine, photocatalysis, anti-counterfeiting encryption, and light-emitting diodes. The preparation of CDs via the “top-down” and “bottom-up”approaches and the preparation methods and applications of halogen (fluorine, chlorine, bromine, and iodine)-doped CDs were discussed here. The main challenges of CDs in the future are the elucidation of the luminescence mechanism, fine doping with elements (proportion, position, etc.), and their incorporation in practical devices.

The term “carbon dots” (CDs) usually refers to carbon or graphene quantum dots (CQDs or GQDs, respectively), carbon nanodots, or polymer dots [1]. As a new type of carbon nanomaterial, CDs are defined as dispersed spheroidal carbon particles less than 10 nm in diameter with fluorescence properties [2]. In 2004, fluorescent carbon was first isolated by the Scrivens group during the purification of single-walled carbon nanotubes [3]. In 2006, these fluorescent carbon nanoparticles were first referred to as CDs [4].
The CDs core is dominated by sp2-hybridized carbon atoms, and there are abundant surface functional groups [5][6]. The internal electronic structures include σ → σ*, σ → π*, π → π*, n → π*, and n → σ* electron transitions, which affect the physicochemical properties of CDs, especially their optical properties [7][8]. The design and synthesis of CDs have been extensively studied owing to the numerous advantageous characteristics of CDs, such as high luminous efficiency, stability, and much greater optical stability than organic dyes and semiconductor quantum dots [9][10][11]. Moreover, they have low toxicity, good biocompatibility, excellent photostability, and tunable fluorescence [12][13][14][15]. Under different excitations, CDs possessing different particle sizes, elemental doping contents, and surface functional groups can emit different types of fluorescence [16][17]. The preparation methods of CDs are diverse, and they have been prepared using graphene, carbon nanotubes, organic small molecules, oligomers, fruits, and vegetables as raw materials (Figure 1). 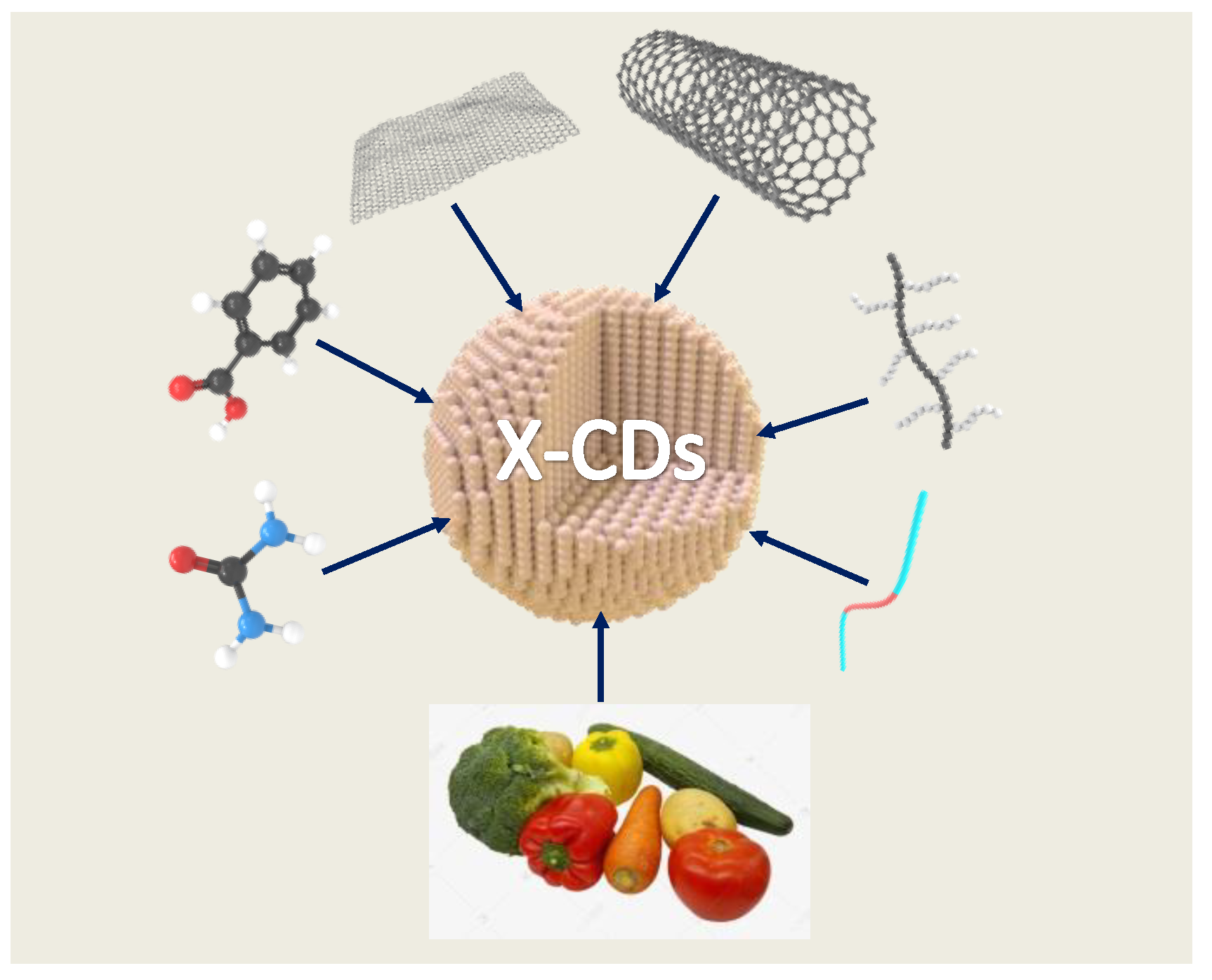 In the top-down method, CDs are formed via physical or chemical means through the disassembly of large amounts of carbon-rich materials (e.g., graphene, carbon nanotubes, candle ash, and carbon black). Laser ablation [35], arc discharge [3], electrochemical synthesis [25], and chemical oxidation reactions [36] are usually employed. However, owing to broken-site randomness, strict control of the size and structure of CDs is difficult. The top-down method generally involves complex processes and expensive equipment and has a low yield; thus, it is unsuitable for large-scale production and practical applications.

This entry summarized halogen-doped preparation methods of CDs and their applications in various fields. Halogen doping of CDs is an effective approach in enhancing their optical and physicochemical properties. In particular, the application of halogen-doped CDs to biological imaging and sensing has been studied intensively. However, their application to photocatalytic degradation, multifunctional electrodes, gene transfection, gene detection, CT imaging, and ECL biosensing has not been widely reported to date. In the context of biological imaging, studies have thus far shown that most halogen-doped CDs can only be used to label the cell membrane and cytoplasm, but not the nucleus. Moreover, questions remain regarding, e.g., the structures of halogen-doped CDs, their formation mechanisms, and the effects of halogen doping on the optical and other properties of the CDs.
As part of the ongoing exploration of CDs, their practical applications have expanded. However, their preparation and widespread adoption still face the following limitations. (1) Their synthesis using various raw materials has endowed CDs with diverse properties. However, the associated microstructures, mechanism of luminescence, and formation process remain unclear. (2) CDs with long wavelength emission have immense potential for application in the fields of biological imaging and file encryption. However, due to the limitations of their synthesis and a lack of sufficient clarity regarding their luminescence mechanism, efficient water-soluble CDs with long wavelength emissions currently remain scarce. Therefore, the synthesis and characterization of efficient water-soluble CDs with long and controllable wavelength emissions needs to be studied in future works. (3) CDs prepared via existing methods cannot achieve precise heteroatom doping, such as doping at the edge or center of the CDs. Therefore, it is of great significance to develop standardized methods for CDs synthesis, purification, and accurate structural characterization. (4) The precision of the heteroatom doping ratio needs further improvement. (5) CDs have been widely studied in the fields of fluorescent probes and biological imaging. These CDs are highly selective and sensitive to stimuli, exhibit fast response times, and are low-cost. Despite these advantages, their application is still in the laboratory stage and further improvements in stability, selectivity, and anti-jamming capabilities are required. Improving these aspects and up-scaling to practical applications should be prioritized. In short, CDs possess several advantages that other quantum dots do not have, and thus have huge application potential in various fields. At present, research into CDs is focused on their simple preparation and convenient purification. It is believed that, with further research, the limitations of CDs will be solved one by one.

More
© Text is available under the terms and conditions of the Creative Commons Attribution (CC BY) license; additional terms may apply. By using this site, you agree to the Terms and Conditions and Privacy Policy.
Upload a video for this entry
Information
Subjects: Nanoscience & Nanotechnology
Contributors MDPI registered users' name will be linked to their SciProfiles pages. To register with us, please refer to https://encyclopedia.pub/register :
Kun Luo
,
Yanmei Wen
,
Xinhuang Kang
View Times: 86
Revisions: 4 times (View History)
Update Time: 09 Aug 2022
Table of Contents
1000/1000
Hot Most Recent