Submitted Successfully!
Thank you for your contribution! You can also upload a video entry related to this topic through the link below:
https://encyclopedia.pub/user/video_add?id=256
Check Note
2000/2000
Human iPSCs into Cardiomyocytes
Edit
Upload a video
This entry is adapted from 10.3390/ijms21020507

Reprogramming of adult somatic cells into induced pluripotent stem cells (iPSCs) has revolutionized the complex scientific field of disease modeling and personalized therapy. Cardiac differentiation of human iPSCs into cardiomyocytes (hiPSC-CMs) has been used in a wide range of healthy and disease models by deriving CMs from different somatic cells. Unfortunately, hiPSC-CMs have to be improved because existing protocols are not completely able to obtain mature CMs recapitulating physiological properties of human adult cardiac cells. Therefore, improvements and advances able to standardize differentiation conditions are needed. Lately, evidences of an epigenetic memory retained by the somatic cells used for deriving hiPSC-CMs has led to evaluation of different somatic sources in order to obtain more mature hiPSC-derived CMs.

The spontaneous beating that appears at the beginning of the differentiation process is generally accepted as sign for the expression, within newly developing hiPSC-CMs, of functional cardiac ion channels and transporters related to generation of action potential (AP) and contractility. Unfortunately, hiPSC-CMs generated with current protocols are still quite immature and existing differentiation techniques appear to work efficiently only with specific cell lines[1][2][3].

The characterization of electrophysiological properties of differentiating, beating CMs is key to define the level of electrical and mechanical cell maturation. Several ionic currents have been characterized in single hiPSC-CMs by using the patch-clamp technique, such as the sodium (INa), the calcium (ICa,L and ICa,T) and the potassium ones (Ito, IKr and IKs)[4][5][6][7][8][9]. In particular, sodium and calcium inward components contribute to the depolarizing phases of the electrical activity; while the former is responsible of the fast depolarizing process, the latter has a functional role during the slower depolarization of spontaneous automatic cells together with If pacemaker current, or during the plateau in stimulated AP, critical phase for the cell contraction. Otherwise, repolarizing process is due to the outward potassium current contribution of the AP. The balance between inward and outward currents determine the AP duration (APD) and then the refractoriness period, that are crucial in developing arrhythmic events.

The biophysical properties that characterize voltage dependence and activation/inactivation kinetics of each of these ion channels have been studied in relation to time of culture. Furthermore, their current density was found to increase from day 30 to 80 of the differentiation process. Consequently, temporal changes of these properties determine different ionic contribution to the cardiac AP (INa, ICaL, IK1), leading to heterogeneous AP profiles and parameters (diastolic membrane potential, Ediast; AP amplitude, APA; AP duration, APD)[10][11][12].

Based on the AP properties, CMs deriving from a single clone of differentiating iPSCs, frequently results in a mix of cells that can be classified as atrial-, ventricular- and nodal-like CMs[13][14][5]. However, this kind of classification is biased by being operator-dependent and may result in misleading interpretation when comparing CMs with prolonged APD (e.g., hiPSC-CMs from Long QT Syndrome patients) to healthy ones. In this context, tools can be used to identify and/or isolate atrial- or ventricular-like hiPSC-CMs. Recently, Schwach et al. have described a specific marker which is highly enriched in human atrial CMs, but not in ventricular ones, the so called chick ovalbumin upstream promoter transcription factors I and II (COUP-TFI and II) that regulates atrial-specific ion channels gene expression such as KCNA5 encoding Kv 1.5 (IKur current) and KCNJ3 encoding Kir 3.1 (IKACh current)[15][16][17]. By fusing this promoter with fluorescent reporter genes (mCherry) and combining it with the well-established human cardiac NKX2.5EGFP/+ reporter, they were able to sort a pure atrial cell population[18].

In Figure 1 the typical features of adult human CM APs are compared to the ones of hiPSC-CMs. In general, nodal-like hiPSC-CMs and sinoatrial CMs APs are comparable, showing spontaneous electrical activity thanks to the contribution of the funny (If) and calcium (ICaL) currents and the absence of the inward-rectifier potassium channels (IK1) that usually maintains negative Ediast. Major differences between adult and hiPSC-CM AP shapes are present when atrial and ventricular APs are analyzed. Indeed, hiPSC-CMs show more depolarized Ediast and they often still have a spontaneous electrical activity, because If is still functional and the IK1 expression is not enough to maintain an hyperpolarized Ediast[19]. As a consequence of the depolarized Ediast, AP upstroke velocity and APD in hiPSC-CMs are not superimposable to those of adult CMs.

To overcome the lack of IK1 expression, the overexpression of Kir 2.1, IK1 encoding gene, [20] or an “electronic” maturation by injection of computational IK1 in a real time mode (dynamic clamp technique) have been designed[21][22]. In both cases, Ediast of derived-CMs hyperpolarizes and the activation of all expressed ion channels allows to develop an AP profile more similar to the one of atrial or ventricular adult CMs. This optimized physiological condition has been used to investigate mechanisms of cardiac cellular disease[23] and predict pharmacological approaches[24][25]. Overall, by adding IK1 (through dynamic clamp or channel overexpression), hiPSC-CMs AP becomes more similar to the adult one, suggesting that from the electrophysiological point of view the lack of this channel may be the main reason for the hiPSC-CM immaturity.

Additionally, hiPSC-CMs repolarization reserve is lower in comparison to adult CMs because of the low expression of the slow delayed rectifier channel IKs. Indeed, the functional contribution of this current to the hiPSC-CM AP has been usually seen under β-adrenergic stimulation and reduced repolarization reserve by blocking the rapid component IKr[26][27][28]. Only in few papers IKs has been recorded in basal conditions in hiPSC-CMs[29], a sign of a good cell maturation level. For this reason, the expression of IKs together with the one of IK1 in hiPSC-CMs are usually seen as functional maturation markers of these cells. 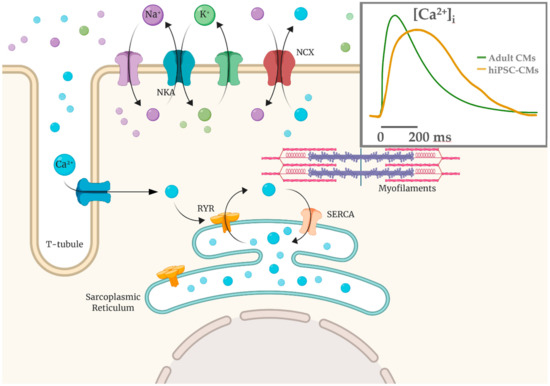 Figure 2. Calcium-induced calcium release mechanism (CICR) schematized with T-tubule and sarcomere structures. Ca2+ influx via the L-type calcium channels is able to cause a release of the SR Ca2+ store via the Ca2+-sensitive ryanodine receptors (RYR2). In hiPSC-CMs the Ca2+ entry is mainly the extracellular one and calcium handling kinetics are slower (yellow in the inset) compared to adult CMs (green).

Single cells recordings with the patch clamp technique are still the most informative and accurate technique to disclose mechanisms underlying abnormal electrical activity in hiPSC-CMs. However, global electrophysiological information can also be acquired by the multielectrode array (MEA) system by plating spontaneous beating clusters of hiPSC-CM. This technique is useful to evaluate changes in AP rate, duration and conduction velocity.

Platforms of hiPSC-CM to test drug safety by analyzing their proarrhythmic effects have been recently developed. Cardiac electrophysiology models have been applied more and more in the emerging discipline of quantitative system pharmacology (QSP) for cardiac safety prediction[39]. hiPSC-CMs have been applied in screening the proarrhythmic potential of drugs; Sotalol, Dofetilide, and E4031 for hERG channel blockade, Quinidine and Flecainide as sodium channel blockers, and Verapamil and Diltiazem as calcium channel inhibitors represent the main examples[40][41][42]. These drugs, in conjunction with in silico modelling, have been indeed the major focus of the FDA’s Comprehensive In Vitro Proarrythmia Assay (CiPA) initiative[43]. In the last years, the CiPA has been a remarkable initiative that uses in silico models for the assessment of potential proarrhythmic effects of drugs that are then classified into high, intermediate and low risk for Torsade de Pointes (TdP) tachycardia. In particular, the potential torsadogenic effect of drugs is based on hERG (IKr) or IKs (slow-delayed rectifier) outward currents inhibition with or without Nav1.5 (transient/late sodium currents, INa/INaL) and Cav1.2 (L-Type Ca2+) inward currents enhancement. The result is a delayed AP repolarization with increased incidence of early afterdepolarization (EADs), leading to ventricular arrhythmias such as TdP and ventricular fibrillation[39][44][45][46]. Furthermore, a computational approach has been recently developed to recapitulate the human AP profile and drug-induced TdP[47][48][49].

The CiPA in silico system represents a predictive strategy applied on hiPSC-CMs for development of therapeutic drugs potentially safety in term of cardiac function. Anyway, care must be taken with conclusions about healthy and pathological phenotypes of CMs, that may result misleading because of their immature functional state[8][11][50].

More
© Text is available under the terms and conditions of the Creative Commons Attribution (CC BY) license; additional terms may apply. By using this site, you agree to the Terms and Conditions and Privacy Policy.
Upload a video for this entry
Information
Subjects: Cell Biology
Contributor MDPI registered users' name will be linked to their SciProfiles pages. To register with us, please refer to https://encyclopedia.pub/register :
Claudia Altomare
View Times: 389
Revisions: 2 times (View History)
Update Time: 23 Oct 2020
Table of Contents
1000/1000
Hot Most Recent