+1 point
Thank you for your contribution! You can also upload a video entry related to this topic through the link below: https://encyclopedia.pub/user/video_add?id=25451
Check Note
2000/2000
The Angiogenic Balance

Angiogenesis is the process of developing new blood vessels from pre-existing ones.

1. Formation and Remodeling of Blood Vessels

Blood vessels that supply the body with oxygen and nutrients, are formed through three different mechanisms (vasculo-genesis, angiogenesis, arterio-genesis) united under the name of neovascularization.
Vasculo-genesis. Blood vessels are formed in the early stages of embryo development through vasculo-genesis when the embryonic mesenchymal cells differentiate into endothelial cells and a “primary capillary plexus” is formed. At present, it is known that, besides its role in embryonic development, vasculo-genesis is also induced after birth. In this case, bone marrow-derived endothelial progenitor cells mediate the cases of physiological and pathological neovascularization, for example, in the cases of wound healing or cardiac ischemia [1][2][3].
Angiogenesis is the main process in post-natal neovascularization and represents the process of new vessel formation from pre-existing ones [4], through two mechanisms: intussusception [5][6] and sprouting [7]. Intussusception represents the “splitting” of an existing vessel into two new vessels, with interior reconstruction of novel blood vessel walls. Leading to a rise in the number of vessels without augmentation of the number of endothelial cells, intussusception angiogenesis is involved in the remodeling of existing vessels, for example, in capillary formation starting from the primary plexus in embryo development, but it can also be seen in post-natal development. Sprouting angiogenesis is a more complicated process. It is regulated by different angiogenic factors and involves several steps: degradation of the basement membrane of the vessel under enzymatic conditions, endothelial cells activation, proliferation and migration, formation of a new lumen and pericyte stabilization [7][8][9][10]. There is much evidence in different studies that a tumor’s vascularization is associated with the metastatic risk and negatively influences the survival rate. The micro-density of a tumor’s vascularization is especially used for the follow-up of anti-angiogenetic therapy [11].
Arterio-genesis represents the formation of new blood vessels from co-existing, co-lateral vessels, with the participation of smooth muscle cells, as an adaptive process to an arterial occlusion [12][13], being rather a re-modeling process. In the proximity of an arterial stenosis, the substitution network is architectured through both arterio-genesis (in near regions, unleashed by mechanical constraints and cytokines) and angiogenesis (in distal sites, where hypoxia would generate new vessel sproutings) [14][15].

Most of the endogenous molecules playing a role in angiogenesis modulation have protein structure, but their usage in therapy is delicate, because of the high cost of their production in large quantities and because of the difficulty in penetrating tissues.
For this reason, more attention has been shown to the preparation and investigation of certain compounds impacting the angiogenesis, such as the polypeptides with therapeutic effect [16]. In the same terms, relating to angiogenesis modeling, some antibiotics, polysaccharides, steroids, and other synthetic small-molecular compounds have been reported [17][18].
As these contents are represented by carbohydrates, this type of compounds used as angiogenesis modulators is introduced in detail here. Many carbohydrate-binding proteins are involved in angiogenesis; therefore, carbohydrates and their analogues may be important factors for angiogenesis regulation [19].
One example is represented by galectin-3 and MCP (modified citrus pectin). Galectin-3 is a β-galactoside-binding lectin, which mediates endothelial cell morphogenesis in vitro and angiogenesis in vivo [20].
Nangia-Makker et al. proved that it is able to tightly bind to galectin-3, via recognition of its carbohydrate recognition domain, and to inhibit angiogenesis and tumor growth [21]. Johnston at al. synthesized and studied heparan sulfate mimetics, represented by a series of poly-sulfated penta- and tetra-saccharide glycosides containing alpha(1→3)/alpha(1→2)-linked mannose residues. They found that the investigated mimetics bound tightly to angiogenic growth factors and exhibited potent activity indicative of angiogenesis; they strongly inhibited heparanase activity and also showed good antitumor activity [22].
One research group has proved that synthetic mannose-6-phosphate analogues can act as angiogenesis activators or inhibitors, depending on the structure of the chemical group functionalizing the C6 position of mannose [23][24]. In another study, researchers prepared gold nanoparticles decorated with various mannose derivatives functionalized in the C6 position and they proved to be effective over angiogenesis [25]. The cation-independent mannose-6-phosphate receptor was previously indicated as inducing angiogenesis through several possible mechanisms [26], but this was the first time that mono-carbohydrates have directly been indicated as an agent possessing angiogenic activities.
Since then, it has been proven that 1,2,3,4,6-penta-O-galloyl-β-d-glucopyranose (PGG) has antiangiogenic activity in vitro and in vivo. Derivatives of PGG with different sugar cores and phenolic substituents have been tested and they are also angiogenesis inhibitors [27][28][29].

Besides mechanical (shear stress and blood flow augmentation) and chemical (hypoxia and nitric oxide increase) influences, angiogenesis is regulated by molecular influences, among which the most important are the angiogenic growth factors: fibroblast growth factor (FGF), vascular endothelial growth factor (VEGF), “platelet-derived endothelial cell growth factor” (PD-ECGF), angiopoietin; angiogenin, etc. [30][31][32]. The vascular endothelial growth factor (VEGF) action is closely related to the stimulation of angiogenesis [33][34]. Angiogenesis is, on the other hand, inhibited by anti-angiogenic factors, such as angiostatin, endostatin, thrombospondin-1 (TSP-1), heparinases, etc. [35]. When the balance between angiogenesis activators and inhibitors loses equilibrium, abnormal (either insufficient or excessive) angiogenesis occurs and various diseases appear or degenerate [36].
The main endogenous angiogenesis activators are summarized in Table 1. The most commonly studied endogenous angiogenesis activators are the FGF and VEGF families. bFGF is the first angiogenic factor that has been purified, in 1975 [37], and FGFs are the first angiogenic factors that were sequenced, in 1985 [38]. VEGF has been identified in 1983 as a vascular permeability factor [39], and only later, in 1989, has it been shown to possess angiogenic action [40]. Table 2 summarizes the main endogenous angiogenesis inhibitors. Thrombospondin-1 is the first protein observed to possess naturally occurring antiangiogenic properties [41][42]. Since then, the number of angiogenesis regulators have grown and, besides endogenous regulators, synthetic molecules with effect on angiogenesis have been obtained and tested, some of them already on the market and available for treatment.
Table 1. Endogenous angiogenesis activators.
Abbreviations: FGF—fibroblast growth factor; aFGF—acidic FGF; bFGF—basic FGF; FGFR—FGF receptor; HSPG—heparan sulfate proteoglycans; VEGF—vascular endothelial growth factor; VEGFR—vascular endothelial growth factor receptor; PlGF—placental growth factor; Ang 1—Angiopoietin 1; Ang 2—Angiopoietin 2; TIE2—tyrosine kinase with immunoglobulin and epidermal growth factor homology domain 2; Ephs—ephrin receptors; RTKs—receptor protein tyrosine-kinase; MMPs—Matrix metalloproteinases; PAR—Protease-activated receptor.
Table 2. Endogenous Angiogenesis inhibitors.
Abbreviations: MMPs—Matrix metalloproteinases; EC—endothelial cell; ATP—adenosine triphosphate; TSPs—Thrombospondins; EGF—Epidermal growth factor; COMP—cartilage oligomeric matrix protein; 2-ME—2-Methoxyestradiol.
There are studies that prove the binding of growth factors to the cell surface, serving as target, receptors, or even as a storage mechanism. This seems to be valid for the inductor FGF which induces the activation of VEGF.
The class of VEGF proteins consists of several derivatives such as VEGF-A, VEGF-B, VEGF-C, VEGF-D, VEGF-E (encoded-virus) and VEGF-F (derived from snake venom) and placental growth factor (PlGF) [33][74][75]. Vascular permeability and inflammation, angiogenesis and apoptosis, lymphangio-genesis and fibrogenesis can be adjusted by the VEGF family [75]. From all the VEGF class components, VEGF-A is the most individualized, representing a substantial angiogenesis promotor and consequently designed as an objective for the study of certain anti-cancer therapies [74][76]. According to the chain length, different VEGF-A isoforms have resulted after the splicing of alternative VEGF mRNA [75], and have further been referred to as VEGFXXX, where “XXX” indicates the number of amino acids from the final protein chain [74]. The most well-known subtypes are VEGF111, VEGF121, VEGF145, VEGF165, VEGF189 and VEGF206 [33].
Human VEGF-A contains eight exons separated by seven introns, all their subtypes presenting similar regions, namely exons 1–5 and 8 [75]. The longer VEGF isoforms containing both exons 6a and 7, such as VEGF145, VEGF189 and VEGF206 have high affinity for heparin sulphate glycoproteins [33][74][77][78]. VEGF162 is a VEGF isoform, whose protein sequence has exons 1–5, 6a, 6b and 8. proliferating the angiogenesis in vivo, while VEGF165 is the most potent endothelial cells proliferation agent. The VEGF shorter isoforms, such as VEGF111 and VEGF121, do not have exons 6 and 7, are highly diffusible and. therefore, cannot connect to the extracellular matrix [33].
The main endogenous activators and inhibitors of angiogenesis are summarized in Table 1 and Table 2.
Certain studies have demonstrated that the thickness of the capillary’s basal lamina may lead to insufficient oxygen diffusion, limiting the elimination of some metabolites, eventually leading to the increase of different diseases’ severity [79][80]. Minchenko et al. [81] suggested that hypoxia is both inductor and stimulator of VEGF expression in vivo, along with the increase of glycemia [82].
VEGF also increases the microvascular permeability that precedes and accompanies angiogenesis, playing a central role in its process, acting as an anti-apoptotic factor for endothelial cells in newly formed blood vessels.
Many studies have highlighted the histological structural changes in the blood vessels of periodontopathic diabetic patients, but less data were reported on the number of abnormally evolution vessels (MVD) and/or their tissue distribution process, which can lead to tumor growth and the development of metastases (neo-angiogenesis).
Thus, in addition to the structural changes visible with light microscopy for the gingival blood capillaries, the number of blood vessels from the gingiva of the periodontal patients with diabetes mellitus (DM) can be displayed by quantitative immunohistochemical method and vascular markers.
It can be believed that the best immunohistochemical marker to highlight the newly formed blood vessels is the CD31+CD34 antibody cocktail which may show the entire micro-vascular network, as shown in Figure 1. 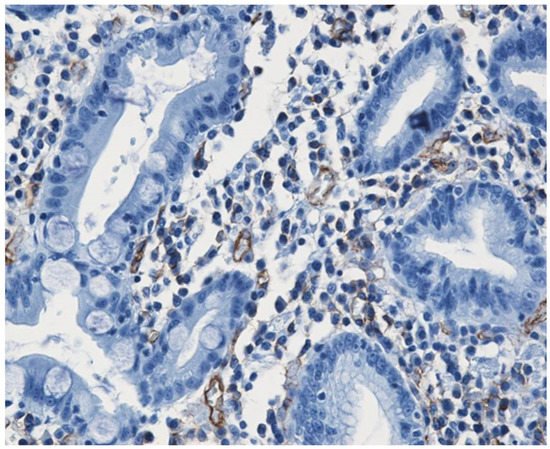 The balance of activators and inhibitors is shown in Figure 2. Besides its role in embryonic development, angiogenesis appears as a normal process in adults, in female reproductive functions [83][84][85][86][87] and in tissue regeneration (ex. wounds healing) [88] (Figure 2B). Under certain conditions, it can appear as a disequilibrium in the synthesis of the endogenous factors that control angiogenesis, and an abnormal angiogenesis can occur. It can be either insufficient, leading to the impossibility of the body healing wounds or participating in normal organ regeneration, or it can lead to the ischemia of a part of the body, such as myocardial, peripheral of intestinal ischemia. Other complications include ulcers, infertility and hair loss (Figure 2A).

As mentioned above, excessive angiogenesis can favor tumor growth and metastasis appearance or it can induce the evolution of diseases such as rheumatoid arthritis, psoriasis, etc. (Figure 2C) [89][90].

Excessive angiogenesis is also linked to a series of eye diseases, which can lead to blindness. It is the cause of visual loss in the case of age-related macular degeneration. Patients who suffer from proliferative diabetic retinopathy are known to have higher VEGF levels when compared to healthy persons [91]. Increased VEGF levels cause uncontrolled angiogenesis in these patients. 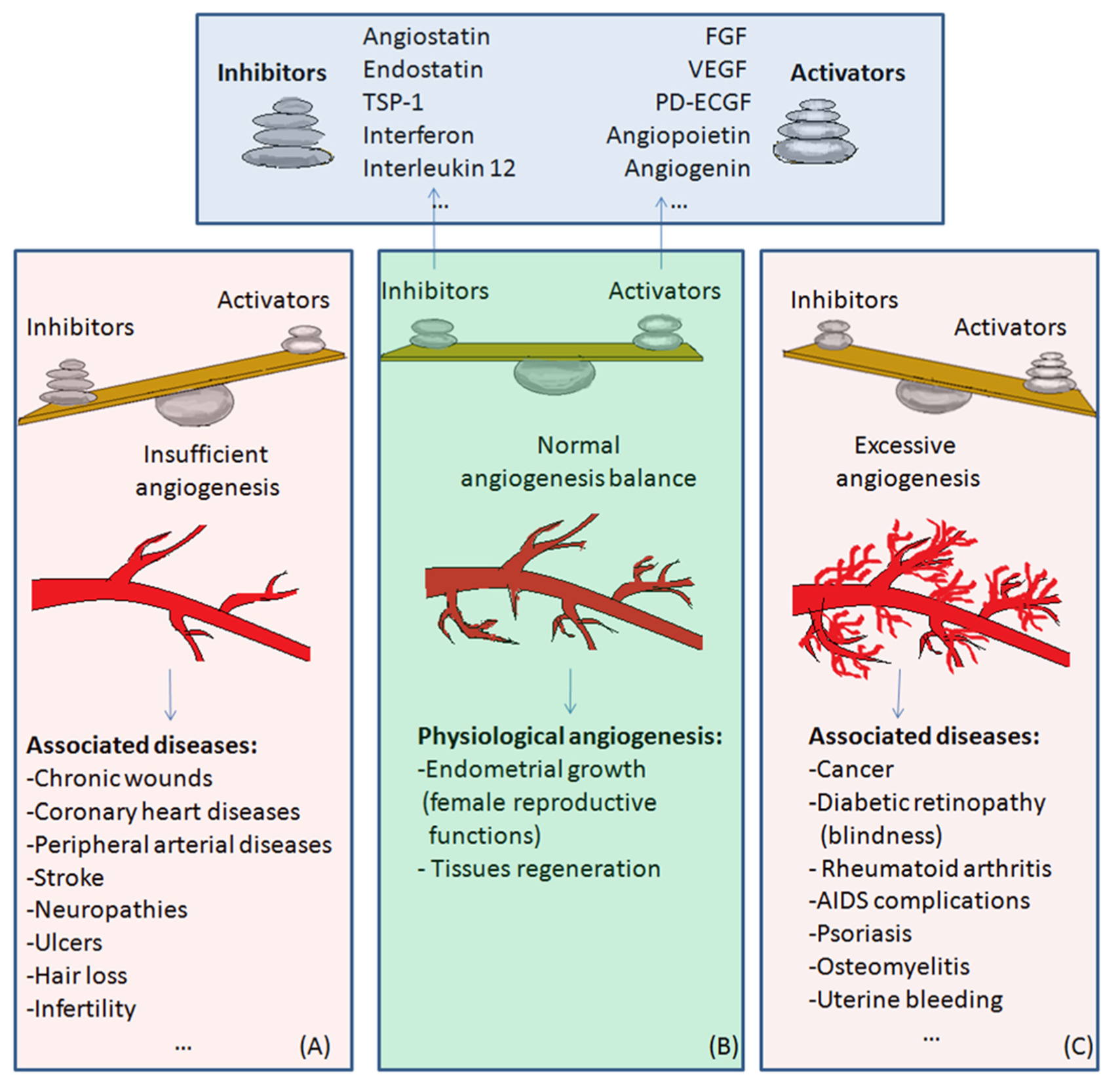