+1 point
Thank you for your contribution! You can also upload a video entry related to this topic through the link below: https://encyclopedia.pub/user/video_add?id=25072
Check Note
2000/2000
Neutrophils in Obesity

Obesity is characterized by an increase in body weight associated with an exaggerated enlargement of the adipose tissue. Accumulation of fat in adipose tissue causes stress and malfunction of adipocytes, which then initiate inflammation. Next, adipose tissue is infiltrated by cells of the innate immune system. It has become evident that neutrophils, the most abundant leukocytes in blood, are the first immune cells infiltrating the adipose tissue. Neutrophils then get activated and release inflammatory factors that recruit macrophages and other immune cells. These immune cells, in turn, perpetuate the inflammation state by producing cytokines and chemokines that can reach other parts of the body, creating a systemic inflammatory condition.

Neutrophils are the most abundant leukocytes in human blood, the primary effector cells of acute inflammation and the first responders to infections [1][2]. Neutrophils are typically considered to be the major leukocytes against infections due to their capacity to act as phagocytic cells [3], degranulate releasing lytic enzymes, perform an oxidative burst producing reactive oxygen species (ROS), and produce neutrophil extracellular traps (NETs) with antimicrobial potential [4][5]. Neutrophils are also considered as the main effector cells of acute inflammatory reactions since they are the first leukocytes to be recruited to inflammation sites where they are capable of producing large quantities of cytokines and chemokines including TNF-α, IL-1β, IL-8, and MCP-1 [6]. Consequently, neutrophils induce the second wave of immune cells, such as macrophages and lymphocytes, to inflammation sites [7][8].
Conspicuously, circulating neutrophils are increased in obesity [9][10][11][12][13], with a clear association between the level of neutrophil blood counts and the higher body mass index (BMI) [9][10][12]. Furthermore, overweight individuals with neutrophilia presented elevated serum C-reactive protein (CRP) concentrations and larger waist circumferences [9][10]. In addition, neutrophil counts were significantly higher in individuals with metabolic syndrome than in lean individuals [10]. In animal models, neutrophils have also been found to be elevated in blood vessels and infiltrating adipose tissue and the endothelium at atherosclerotic lesions [14]. Moreover, neutrophils in obese individuals present an activated phenotype as indicated by elevated plasma concentrations of myeloperoxidase (MPO) and neutrophil elastase (NE) [15][16], as well as an increased expression of CD66b, a marker of neutrophil degranulation [15][17]. Activation of neutrophils from obese individuals was also indicated by stimulation of the NF-κB signaling pathway [17] and by a higher ROS generation and enhanced release of proinflammatory cytokines [18].
Importantly, weight loss following gastric band surgery resulted in a decrease in neutrophil blood counts [19] and in proinflammatory activities of peripheral blood neutrophils [18]. These results suggest that the inflammatory condition of obesity also leads to the expansion of neutrophils [20][21][22]. In fact, elevated concentrations of acute-phase proteins have been reported in obese individuals [23][24]. As mentioned before, the adipose tissue in obese individuals is capable of producing increased levels of mediators of inflammation like TNF-α, IL-1β, IL-6, and IL-8 [25][26][27][28][29][30]. These inflammatory mediators increase bone marrow granulopoiesis [31][32][33], releasing neutrophils from the bone marrow to the peripheral circulation. Moreover, these inflammatory mediators induce de-margination of neutrophils from endothelial walls, resulting in neutrophilia [34]. In addition, the adipose tissue also produces leptin which has been shown to promote hematopoiesis [35][36][37]. Leptin can additionally stimulate the oxidative burst of neutrophils, induce chemotaxis, and inhibit apoptosis in these cells [35]. Together, these reports support the notion that, indeed, obese adipose tissue is responsible for promoting a systemic inflammation that results in the generation, increase in numbers, and activation of neutrophils. In consequence, these leukocytes are the first cells to infiltrate adipose tissues.

The clear connection between obesity and an elevated neutrophil blood count has motivated people to look for simple biomarkers of obesity and inflammation. The hematological parameter for systemic inflammation known as the neutrophil-to-lymphocyte ratio (NLR) is an easy biomarker of immune response to various infectious and noninfectious stimuli [38]. The NLR is commonly used in many medical areas as an indicator of dynamic changes of neutrophils and lymphocytes in blood during systemic inflammation. The NLR reflects the relationship between innate (neutrophils) and adaptive (lymphocytes) immune responses in various pathological conditions. Because the NLR correlates with CRP concentrations, it becomes a simple cost-effective biomarker for the detection of subclinical inflammation [39].
Accordingly, the NLR has been found to be significantly higher in obese individuals than in healthy lean individuals [40][41][42][43], with a positive correlation to the BMI [40][43][44][45][46]. As expected, the NLR is also associated with higher plasma CRP concentrations [13][40][47][48]. The same trend has been reported in mice fed with an obesogenic diet. The effect on the NLR seems to be due to changes in the gut microbiota, which affects blood leukocyte numbers [42]. The significant association between obesity and a high NLR (higher than 4) was a good predictor of increased breast cancer risk. Patients with a high NLR and a high BMI also had the worst disease-free survival [41][46]. More importantly, NLR values were found to correlate significantly with the degree of abdominal obesity [49][50]. Furthermore, in morbid obese patients, a high NLR was reported to be a powerful and independent predictor of type 2 diabetes mellitus (T2D) [51]. Hence, the NLR is a simple and accessible biomarker that provides information about the inflammatory state of obese individuals. Importantly, the NLR seems to be able to identify an ongoing systemic inflammation in overweight individuals that otherwise appear healthy [47][48]. Therefore, a higher NLR in overweight individuals may reflect the subclinical inflammation already present in this group of people. 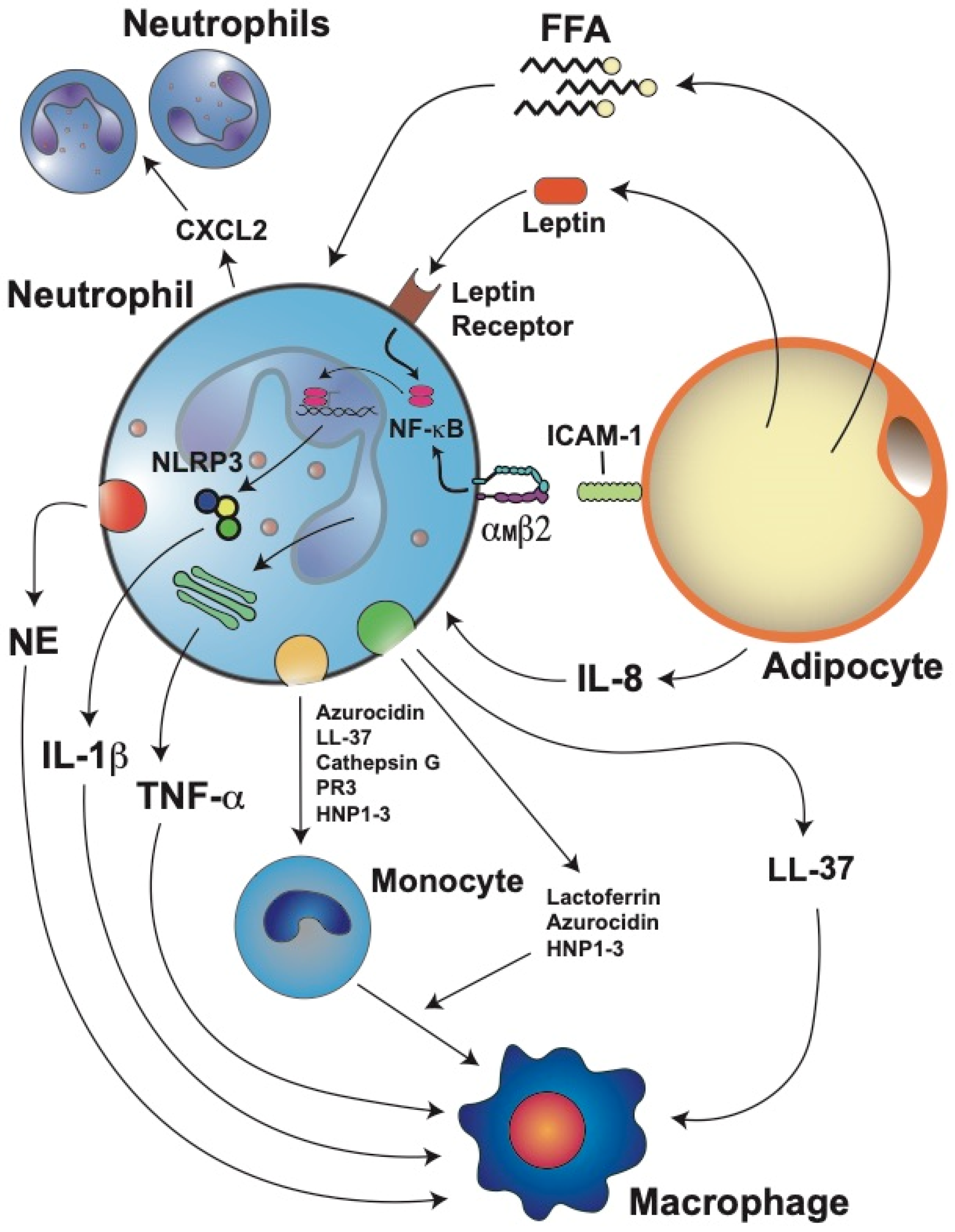 Figure 1. Stressed adipocytes in obese adipose tissue recruit neutrophils, which then further promote inflammation. Adipocytes produce adipokines such as leptin and cytokines such as interleukin-8 (IL-8). IL-8 is a potent chemoattractant for neutrophils. Once in the adipose tissue, neutrophils can recruit more blood neutrophils by releasing C–X–C motif chemokine ligand 2 (CXCL2), another important neutrophil chemoattractant. Neutrophils directly interact with adipocytes via the binding of integrin αMβ2 on the neutrophil to intercellular adhesion molecule 1 (ICAM-1) on the adipocyte. This interaction activates neutrophils and induces them to produce interleukin 1 beta (IL-1β) via the nuclear factor kappa B (NF-κB) and inflammasome (NLRP3) pathways. IL-1β is an important activator of macrophages. Neutrophils also produce tumor necrosis factor alpha (TNF-α), which further stimulates macrophages. Leptin, through its receptor, also activates the NF-κB pathway, resulting in the inhibition of neutrophil apoptosis. Free fatty acids (FFA) derived from adipocyte lipolysis can also attract neutrophils and stimulate them to produce more IL-1β. Neutrophils also produce elastase (NE) which impairs energy expenditure in the adipose tissue and directly activates macrophages. Granule protein cathelicidin (LL-37) can also activate the release of more proinflammatory cytokines from macrophages. Activated neutrophils can also recruit monocytes through the release of azurocidin, LL-37, cathepsin G, proteinase 3 (PR3), and human neutrophil peptides 1–3 (HNP1–3). In addition, lactoferrin, azurocidin, and HNP1–3 can induce polarization of macrophages towards the M1 proinflammatory phenotype.

More
© Text is available under the terms and conditions of the Creative Commons Attribution (CC BY) license; additional terms may apply. By using this site, you agree to the Terms and Conditions and Privacy Policy.
Upload a video for this entry
Information
Subjects: Immunology
Contributors MDPI registered users' name will be linked to their SciProfiles pages. To register with us, please refer to https://encyclopedia.pub/register :
Carlos Rosales
,
Eileen Uribe-Querol
View Times: 244
Revisions: 3 times (View History)
Update Date: 14 Jul 2022
Table of Contents
1000/1000
Hot Most Recent