Submitted Successfully!
Thank you for your contribution! You can also upload a video entry related to this topic through the link below:
https://encyclopedia.pub/user/video_add?id=250
Check Note
2000/2000
Invasion of Embryo’s Nutritional
Edit
Upload a video
This entry is adapted from 10.3390/ijms21010289

Looking from the side of the embryo in terms of nutritional support from the mother, shortly after implantation, there is the need to increase nutritional support due to the massively increasing volumes of embryo and placenta in the absence of any supporting blood vessel. Within the endometrium of the human uterus, this is best performed by eroding uterine glands in direct vicinity to the placenta, allowing direct contact of the syncytiotrophoblast to the glandular secretion products. Hence, it looks as if histiotrophic nutrition of the embryo already starts a few days after implantation [[1]].

2. Looking into Invaded Uterine Structures from the Embryo’s Nutritional Point of View

In the collection of images of Allen Enders at the Centre for Trophoblast Research in Cambridge, there are images from case 8020, which is considered the earliest specimen in the Carnegie collection, probably of day one after initiation of implantation. In one of the images from case 8020, the margin of the trophoblastic plate is displayed (Figure 1A). Here, the initially invading syncytiotrophoblast has already invaded uterine glands underlying the embryo. This is the earliest description of glandular invasion by trophoblast. In a later-stage case of the early lacunar stage (Figure 1B), invasion into a uterine gland can be seen again [[2]].

Following this early invasion by the initially invasive syncytiotrophoblast, the extravillous trophoblast population takes over and further invades into uterine glands, resulting in opening these luminal structures toward the developing intervillous space of the placenta [[1]]. As soon as the intervillous space of the placenta is established, the glandular secretion products flow into this space and are transferred from the placenta to the embryo [[3]]. At the same time, the remaining secretion products and the respective fluids need to be drained back into the maternal system. Hence, erosion and connection of uterine veins to the intervillous space of the placenta needs to take place next (Figure 2A) [[4][5][6]]. Other images of the Enders collection show the junctional zone of trophoblast invasion at the secondary villus stage. Here, invasion into veins and glands can be found, while arteries next to these two luminal structures do not show any signs of invasion [[2]]. 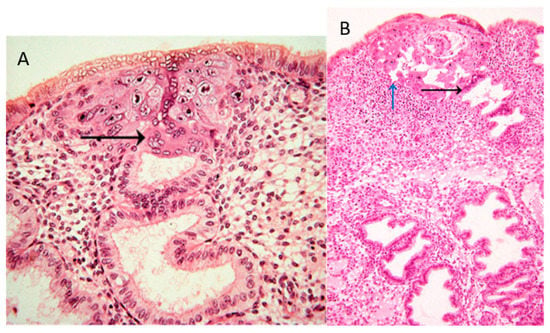 Figure 1. (A) Image #7 of case 8020: Margin of the trophoblastic plate. Allen Enders explained: “Syncytial trophoblast with small nuclei has invaded the underlying endometrial gland. It is not known whether the small nuclear syncytium is synctiotrophoblast or is partially a heterokaryon involving fusion of trophoblast and uterine cells.” The black arrow points to invasion into a uterine gland.  (B) Image #13 of case 8171: Early lacunar stage (stage 5B). Allen Enders’ explained: “Note that the appearance of endometrial glands is similar to that seen in one of the stage 5A sites.” He further explained (under image #14 of case 8171): “Note continuity of a capillary with a lacuna that anastomoses with other lacunae. Trophoblast appears to be invading a gland in the upper right.” The black arrow points to invasion into a uterine gland, while the blue arrow points to invasion into a uterine blood vessel. Images are provided by courtesy of Allen C. Enders and the Carnegie Collection.

Finally, around mid-first trimester spiral arteries are the next target of the invading extravillous trophoblasts. While glands and veins have thin walls and only need to be eroded and connected to the placenta (Figure 2A), the arterial walls need to be prepared prior to invasion into them. Finally, the spiral arteries are invaded as well, and their lumen is plugged until the beginning of the second trimester (Figure 2B) [[7][8]].

Hence, during the first trimester, a plasma flow from the plugged arteries, plus a flow of glandular secretion products, enters the intervillous space of the placenta, which is drained back into the maternal system by the utero-placental veins (Figure 2B). This allows the nutritional support of the embryo during the first trimester of pregnancy with substances in maternal plasma, plus the secretion products of the uterine glands. This has been termed histiotrophic nutrition by glands rather than vessels [[3]].

While the histiotrophic nutrition seems to be sufficient in the first trimester of pregnancy, with the massive growth of the fetus later in pregnancy, a different nutritional support is needed. With the dissolution of the plugs from the arteries and the establishment of the flow of maternal blood into the placenta at the beginning of the second trimester, the nutritional supply of the fetus changes from a histiotrophic to a hemotrophic nutrition (Figure 2C) [[3][9]]. At the same time, the number and the input of uterine glands diminish, while, of course, the veins remain, to drain back maternal blood into the maternal circulation. Due to the lack of normal placental-bed specimens of the time around mid-gestation, it is not clear when the glandular connection to the placenta disappears. It seems as if this occurs around week 20 of pregnancy, but this still needs further elucidation.

Figure 2. Schematic representation of the routes of trophoblast invasion during normal pregnancy. (A) Very early in pregnancy, prior to six weeks of gestation, invasion of the early invading syncytiotrophoblast during implantation, as well as invasion of early extravillous trophoblasts, results in opening uterine glands and veins toward the intervillous space of the placenta. Endoglandular trophoblasts open uterine glands, to enable the flow of “uterine milk” toward the placenta. This is followed by invasion of endovenous trophoblasts into uterine veins, to enable backflow of fluids into the maternal system, including villous material and endoglandular trophoblasts (shown in vein). The arrows in gland and vein represent the material transported in these structures (green arrow: glandular secretion products). (B) Later, during the first trimester, endoarterial trophoblasts invade into uterine spiral arteries, transform their walls, and plug their lumen, to hinder flow of maternal blood into the placenta. At that stage, only blood plasma is seeping through the plugs (indicated by the dashed red arrow). During this stage of pregnancy, the backflow via utero–placental veins comprises glandular secretion products, plus plasma from the spiral arteries (green arrow plus dashed red arrow), including villous material plus endoglandular and endoarterial trophoblasts (shown in vein). (C) At the beginning of the second trimester, the arterial plugs disintegrate, and the flow of maternal blood into the placenta is finally established. So far, it is not clear at which time point the glandular input diminishes and disappears, but in the second half of pregnancy, respective glands can hardly be found. Hence, this schematic drawing only shows arteries and veins (red arrows: maternal blood). Now, the venous backflow contains villous material, as well as endoarterial trophoblasts (shown in vein). A, artery; G, gland; V, vein; GA, gestational age; ST, syncytiotrophoblast; vCT, villous cytotrophoblast; EVT, extravillous trophoblast.

More
© Text is available under the terms and conditions of the Creative Commons Attribution (CC BY) license; additional terms may apply. By using this site, you agree to the Terms and Conditions and Privacy Policy.
Upload a video for this entry
Information
Subjects: Pathology
Contributor MDPI registered users' name will be linked to their SciProfiles pages. To register with us, please refer to https://encyclopedia.pub/register :
Berthold Huppertz
View Times: 461
Revisions: 3 times (View History)
Update Time: 30 Oct 2020
Table of Contents
1000/1000
Hot Most Recent