+1 point
Thank you for your contribution! You can also upload a video entry related to this topic through the link below: https://encyclopedia.pub/user/video_add?id=24756
Check Note
2000/2000
Natural Killer Cells: Tumor Surveillance and Signaling

Natural killer (NK) cells play a pivotal role in cancer immunotherapy due to their innate ability to detect and kill tumorigenic cells. The decision to kill is determined by the expression of a myriad of activating and inhibitory receptors on the NK cell surface. Cell-to-cell engagement results in either self-tolerance or a cytotoxic response, governed by a fine balance between the signaling cascades downstream of the activating and inhibitory receptors.

Natural Killer (NK) cells are bone marrow–derived innate lymphocytes that are found in most organs, with the largest population of NK cells residing in the blood [1]. NK cells are large granular lymphocytes that were initially defined by their ability to kill tumor cells without prior sensitization [2][3]. The role of NK cells has since been expanded to include the elimination of virally infected cells and secretion of cytokines that mediate crosstalk and regulation of other immune cells [4].
Following their discovery in the 1970s, immunologists have been fascinated by the ability of NK cells to detect and kill tumorigenic or virally-infected cells, whilst tolerating healthy self-tissue [5][6][7]. However, it wasn’t until the early 1990s that scientists started to explore the mechanisms by which NK cells distinguished “self” from “non-self,” an area of research instigated by Klas Kärre’s exposition of the “missing self” theory [8]. Karre hypothesized that NK cells could recognize loss or reduction in surface expression of major histocompatibility complex (MHC) class I proteins (human leukocyte antigens (HLA) class I in humans), triggering recognition as non-self. This hypothesis was based on earlier studies by Strokus et al. [9][10] that described protection of susceptible cells with experimentally expressed MHC-I. The ‘missing-self’ theory was further validated by Karlhofer et al. [11], who showed that the murine Lymphocyte Ag 49A (Ly49A) receptor recognized and discriminated between different MHC-I molecules, with tumor cells from H2d and H2K backgrounds resistant to killing by Ly49A expressing NK cells [11][12]. Soon after, Moretta et al. [13] discovered the first human inhibitory NK receptor Killer cell immunoglobulin-like receptor 2DL1 (KIR2DL). Inhibitory receptors are now known to not only sense reduction in expression of MHC class I proteins, but also recognize non-MHC-I molecules, such as glycans and collagen, which are crucial for NK cell discrimination of self [14]. Upon engagement of cognate ligands, the various NK cell receptors send activating and inhibitory signals, which collectively determine NK cell action.
NK cells kill infected and transformed cells via a variety of mechanisms, including the delivery of lytic granules loaded with proteases and pore-forming proteins such as granzymes and perforin, release of cytokines such as tumor necrosis factor alpha (TNFα) and interferon gamma (IFNγ), upregulation of FASL and TNF-related apoptosis-inducing ligand (TRAIL) and by antibody-dependent cellular cytotoxicity (ADCC) [15][16][17][18][19]. There are multiple steps between NK cell: target cell engagement and cell killing, with receptor-ligand interactions thought to be the initiating step in the formation of an immunological synapse (IS) (Figure 1A,B) [20][21]. This is followed by recruitment of filamentous actin (F-actin) to the IS (Figure 1B) and polarization of the lytic granules and the microtubule-organizing center (MTOC) toward the IS (Figure 1C). Then, the granules dock at the synapse and are ready for the final step: granule-membrane fusion and release of the cytotoxic contents at the center of the IS (Figure 1D) [22][23]. NK cell signaling and killing is considered to be localized to the IS [24], with each NK cell thought to reach exhaustion after killing four to seven target cells [25].

Figure 1. Immunological synapse (IS) of Natural Killer (NK) cell and target cell. (A) NK cells engage other cells via integrins and adhesion molecules, which create the immunological synapse (IS)—the subsequent process between engagement and killing or tolerance can be broken down into four steps. (B) First, filamentous actin (F-actin) is recruited to the IS. Inside-out signaling reinforces IS interactions and activating and inhibitory surface receptors cluster at the IS. (C) Second, NK lytic granules move along microtubules by dynein-dynactin motor proteins toward the microtubule-organizing center (MTOC). (D) Third, the polarized lytic granules and MTOC travel in an ATP-dependent manner through the actin mesh via myosin IIA to dock at the IS, and finally, the lytic granules fuse with the membrane and release the lytic contents into the target cells, a process also known as degranulation. The NK cell then detaches and moves on to the next target. 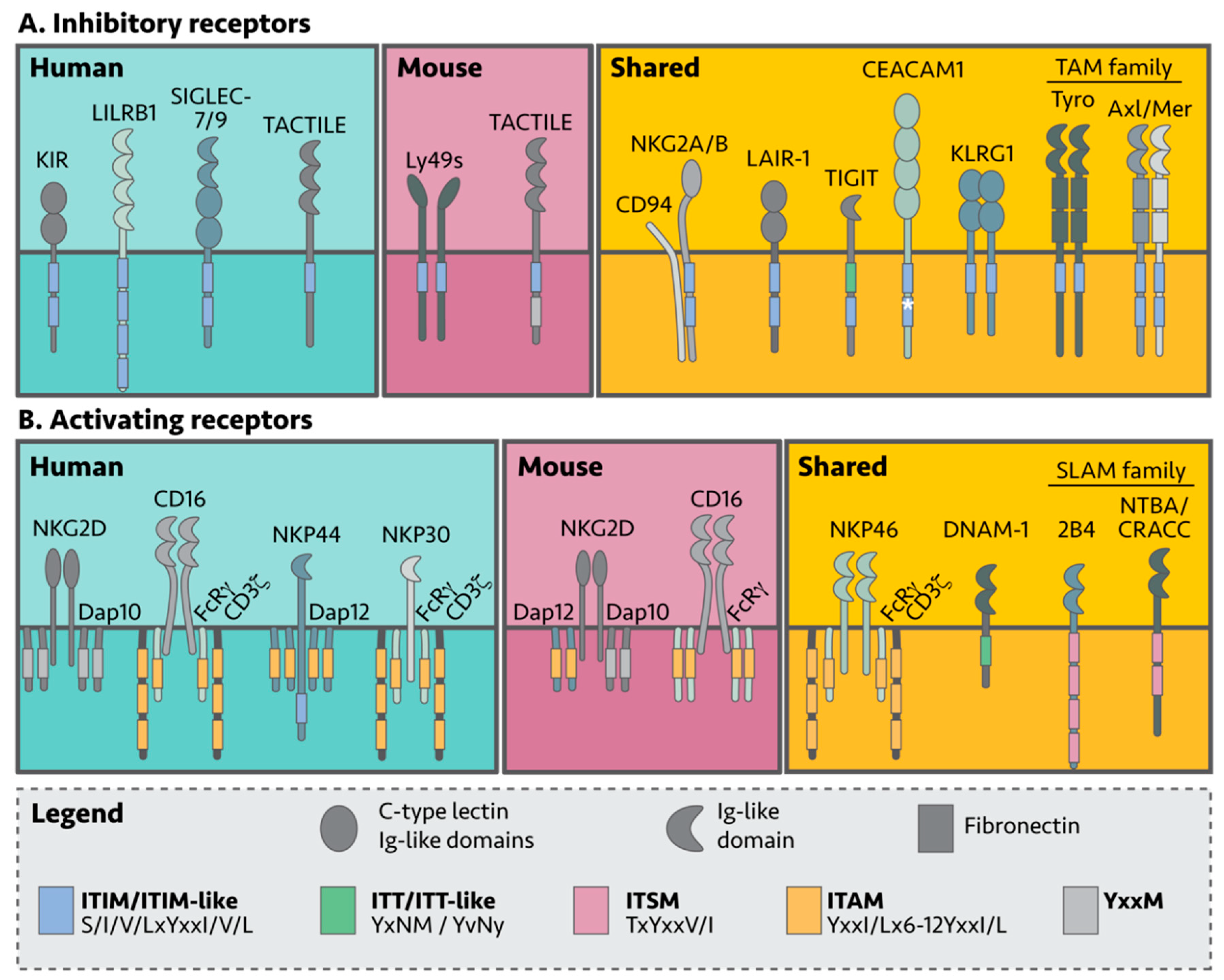 The success of current immunotherapies that block immune checkpoints, such as CTLA4 and PD1 in CD8 cells, has spurred interest in targeting other immune populations, such as NK cells. Given that blocking NK inhibitory receptors has proven beneficial in experimental tumor models, a number of blocking antibodies have been developed, with several progressing to clinical trials. Currently, KIR2D and NKG2A are the only two MHC-I-dependent receptors targeted to mimic a “missing-self” situation and enhance anti-tumor activity, with two agents that block KIR2D (Lirilumab and IPH2101) in clinical phase I or II trials. Lirilumab alone or in combination with other agents is being trialed against solid tumors (NCT03203876), hematological malignancies [29], chronic lymphocytic leukemia (NCT02557516), multiple myeloma (NCT01592370), resectable squamous cell carcinoma of the head and neck (NCT03341936), and resectable bladder cancer (NCT03532451), while IPH2101 is being trialed against acute myeloid leukemia [30]. Monalizumab is the only antibody being trialed for NKG2A, both alone and in combination with other agents for advanced gynecological solid tumors [31], advanced squamous cell carcinoma of the head and neck (NCT02643550), and resectable non-small cell lung cancer (NCT03794544).
In addition to KIR2D and NKG2A, anti-TIGIT antibodies are in multiple phase I and II clinical trials against different advanced solid tumors (NCT029133133, NCT02794571 and NCT02964013). Anti-TIGIT antibodies are also being used in combination with other therapies against solid tumors (NCT04150965, NCT03119428 and NCT04047862), notably against advanced non-small cell lung cancer (NCT03563716). These are just a handful of the clinical trials that are taking advantage of blocking inhibitory NK signaling, with no doubt many more to come.

The full complement of events that transduce inhibitory receptor signals remains unclear, with much work still required to fully understand the different pathways. However, for some receptors a clearer picture of the signaling events following ligand engagement is now emerging, as well as identification of alternative signaling cascades that can lead to inhibition.
Inhibitory NK receptors signal via the different tyrosine-containing motifs: ITIM, ITT, ITSM, ITIM-like, ITT-like, or ITSM-like motifs. Upon engagement of the respective ligands, tyrosines within the signaling motifs are phosphorylated by members of the Src-family kinases (SFKs), with Lyn and Lck the most likely candidates in NK cells (Figure 3A) [32][33][34]. Tyrosine phosphorylation within the inhibitory motif enables recruitment of Src homology 2 (SH2)-containing protein tyrosine phosphatases such as SHP-1 and SHP-2, which then function to de-phosphorylate signaling intermediates and negatively regulate NK cell activity. 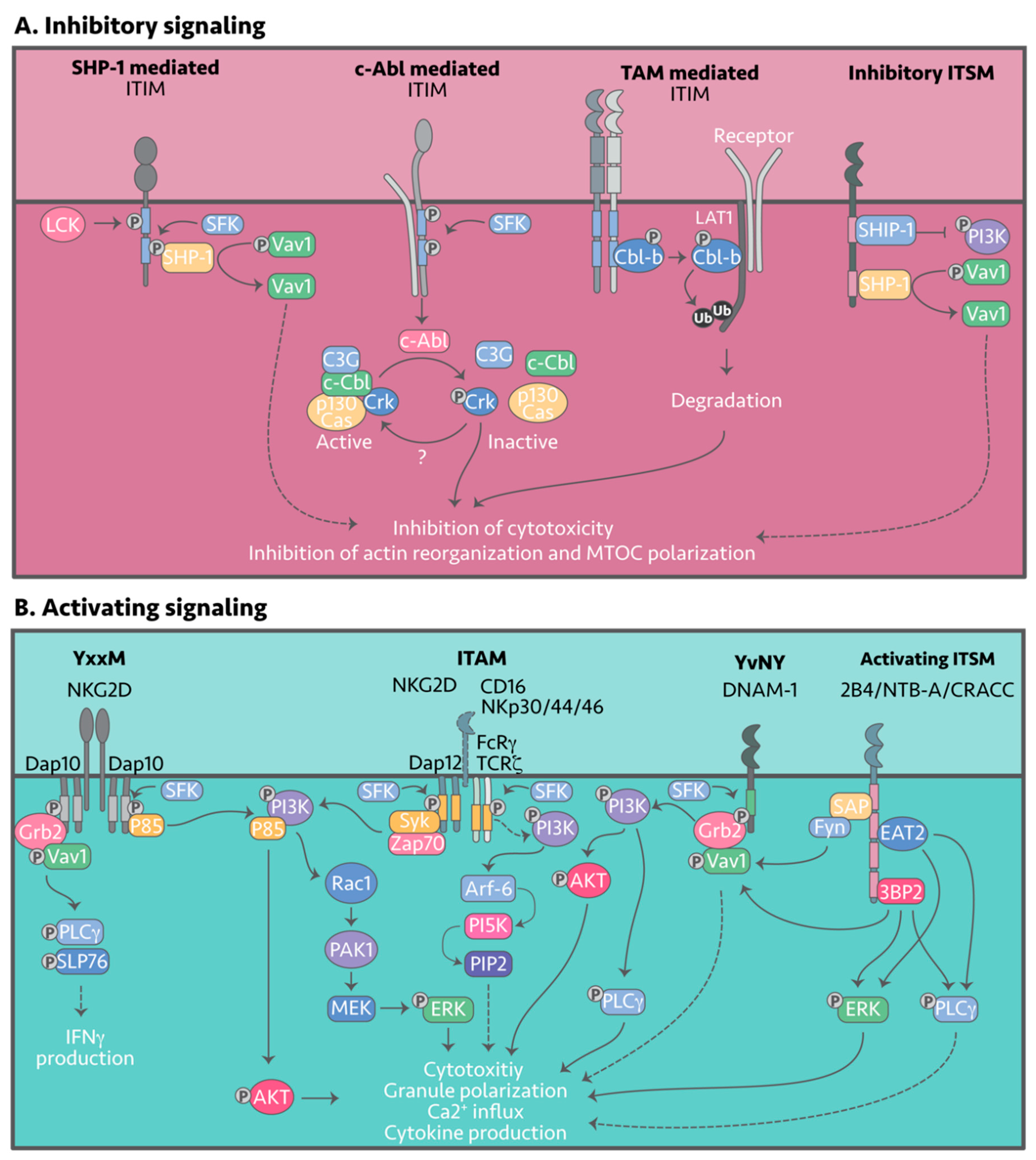 Figure 3. Inhibitory and activating NK cell signaling. NK cell effector function is collectively determined by the strongest activating or inhibitory signals. (A) Signaling downstream of inhibitory receptors is initiated by ligand engagement, followed by tyrosine phosphorylation of the signaling motif by Src-family kinases (SFK), Fyn or Lck. Once phosphorylated, there are three known inhibitory pathways: (1) Recruitment of SHP-1, SHP-2 or SHIP, which dephosphorylate Vav1; (2) Association with c-Abl kinase, which phosphorylates Crk disassociating it from its active complex and; (3) Phosphorylation and activation of Cbl-b by the TAM receptors. Cbl-b in turn ubiquitylates activating signaling intermediates such as LAT1 for degradation. (B) Signaling downstream of activating receptors is similarly transduced by tyrosine containing motifs that are phosphorylated by SFK. Various signaling intermediates such as Grb2, VAV1, or PI3K are then recruited, which induce cytotoxicity and cytokine release.

More
© Text is available under the terms and conditions of the Creative Commons Attribution (CC BY) license; additional terms may apply. By using this site, you agree to the Terms and Conditions and Privacy Policy.
Upload a video for this entry
Information
Subjects: Cell Biology
Contributors MDPI registered users' name will be linked to their SciProfiles pages. To register with us, please refer to https://encyclopedia.pub/register :
Lizeth G. Meza Guzman
,
Narelle Keating
,
Sandra E. Nicholson
View Times: 98
Revisions: 2 times (View History)
Update Date: 04 Jul 2022
Table of Contents
1000/1000
Hot Most Recent