+1 point
Thank you for your contribution! You can also upload a video entry related to this topic through the link below: https://encyclopedia.pub/user/video_add?id=24650
Check Note
2000/2000
Blockchain for Future Wireless Networks

The landscape of wireless networks (WNs) is continuously expanding as a fast-growing technology with innovative features, such as flexibility, mobility, lack of wiring, etc. Their usage is increasing in diverse smart applications, such as smart cities, e-healthcare, intelligent traffic management, smart agriculture, autonomous vehicle, smart retail, and smart grid [1]. It is becoming an integrated part of people’s everyday life for day-to-day activities where a sender can transmit essential data to the receiver without using any physical medium (cables) [2]. Recent technological inclination in the WNs provides several benefits, such as ubiquitous high data rates, low latency, and high bandwidth, along with various limitations, such as security, privacy, reliability, authenticity, integrity, and scalability that can hinder the performance of WNs-based applications. To overcome the aforementioned issues, the scientific community has adopted effective radio resource management and modern technology, such as artificial intelligence, blockchain, quantum communication, etc., that offers better network performance in every next-generation wireless network. Figure 1 shows the evolution of wireless communication technologies that started in the late 1970s. It took almost 50 years for WNs to evolve from the 1st generation to the 5th generation to deliver a progressive quality of services (QoS) to an individual and the nation’s capital economy [3][4].

The WNs evolved in a short span of time, witnessing explosive growth in the sector of industry, healthcare, science, and technology by pervasively connecting them. Since the 1970s, newer generations of WN have been introduced, which adroitly improve people’s quality of life by providing productive services, such as voice calls, multimedia services, remote connections, on-demand, intelligent services, and many more. In 1979, the first cellular WN 1G was introduced, but it had low voice quality, higher interference, and no encryption mechanism was applied for secure communication. Then, with primary progressions, other generations (2G, 3G, 4G, and 5G) of cellular WNs were developed to add value to telecommunication and network service [3]. 2G provides a few imperative mobile call advancements, with encryption mechanisms, such as improving voice quality and reducing cross-talk [4]. On the contrary, 3G networks are faster and capable of transmitting data at a higher rate (maximum download speed 7 Mbps). They facilitated end-users to record video calls, watch TV online, surf the internet, and play online mobile games for the very first time [27]. Moreover, IoT-enabled devices become the center of social connectivity in 3G by using IP-based communication, but it also raises concern for security vulnerabilities [28].
4G has become the first generation to use long-term evolution (LTE) technology that improves the data rate and QoS of WNs. Moreover, 5G has replaced 4G with various changes, such as enhanced data rates (1 Gbps), low latency (100 ns), mobility range (100–500 km/h), etc., for better network coverage and reliability [29][30]. The communication latency in 5G has decreased substantially, resulting in fast download and upload speeds. Although 5G networks are becoming a reality, technologists have already started to be engaged with future WNs, i.e., 6G, which anticipates putting greater prominence on wearable technologies, unmanned aerial vehicles (UAVs), 3D networking, and wireless power transfer to amplify people’s quality of life [31]. However, the radio resources used by the WNs operators are entirely open to security attacks, and therefore there is a need to explore and examine such attacks to stop them before they jeopardize the WN systems.

3. Security in Wireless Networks (From 4G to 6G)

Researchers highlight network security issues associated with different generations of WN, such as 4G, 5G, and 6G. In WN, a sender can share information via the Internet with the receiver. The Internet has an intricate design principle using network devices such as routers, switches, hubs, and cables, connected with simple topologies without a stronger security mechanism. This entices the attackers to scan the network devices and interfaces to find potential vulnerabilities which can further be exploited for their own benefit [32][33]. Thus, security and privacy play an essential role in protecting user data in the wireless medium [34]. To overcome that, security specialists have proposed several design factors that pave the way in thwarting the malicious attempts of the attackers. Figure 2 shows the design factors, such as authorization, authentication, encryption, intercept probability, and channel characteristics, that confront the security attacks and improve the reliability of the WN communication. A summarized explanation of each design factor is given as follows. 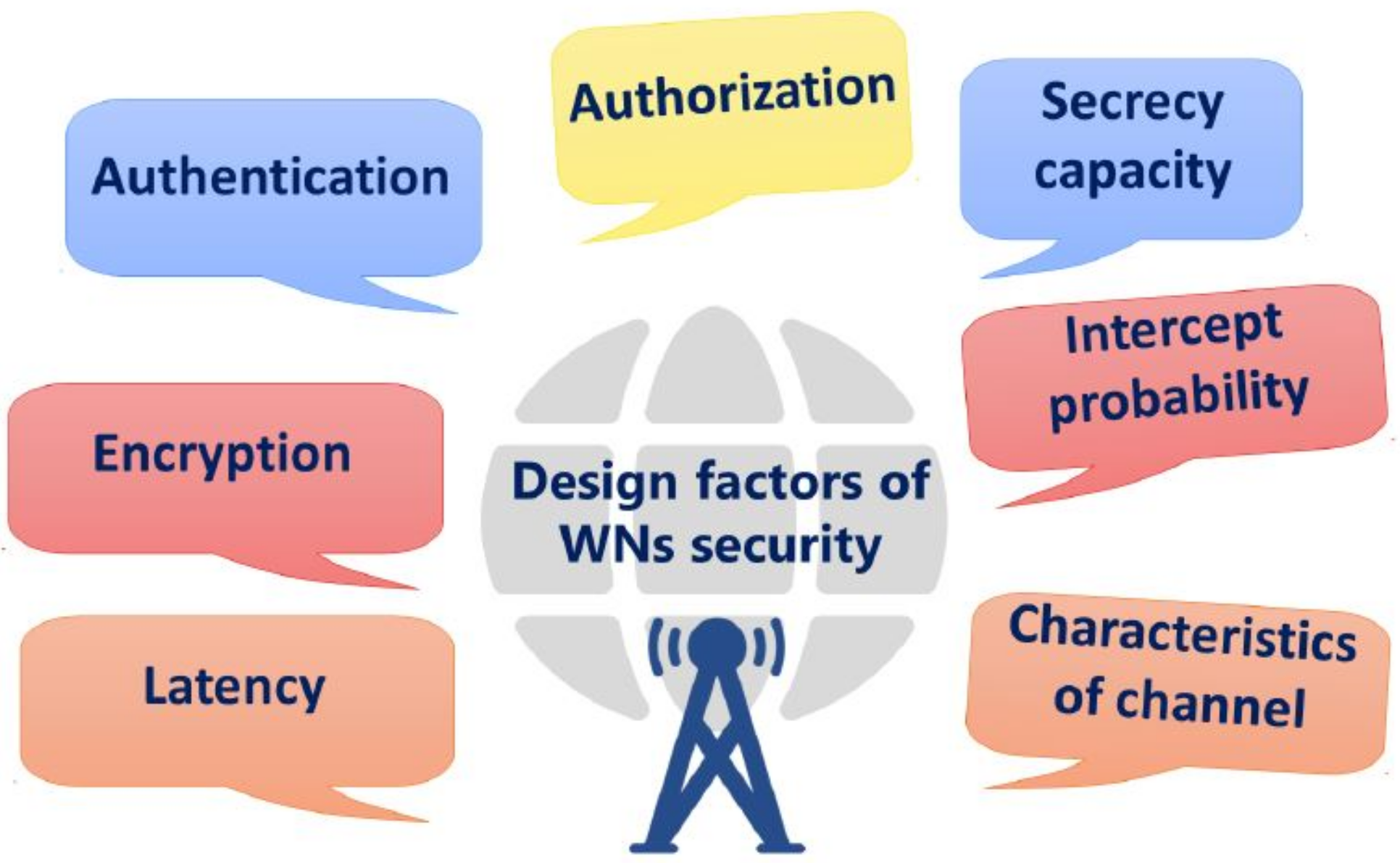 Blockchain is a peer-to-peer (P2P) architecture that weakens the dominance of third-party intermediaries by utilizing decentralization with essential features, such as immutability, reliability, transparency, and security. The blockchain blocks are connected with each other to form a distributed ledger, where each block stores/maintains the hash of the previous block. Any minuscule change in one block reflects the difference in the hash of the other blocks. Therefore, blockchain technology is transparent and reliable against data integrity attacks. Moreover, the distributed ledger is secured by cryptographic techniques, such as digital signatures, hash, and public–private key pairs that validate each transaction whenever a new transaction is added to the blockchain [35][36]. Figure 3 shows a workflow of a blockchain transaction; wherein a transaction request is broadcast to all the nodes of the blockchain. In addition, digital signatures are used for user identity (a node can sign the document and broadcast it to all other nodes). Then, the private and public keys are used to verify the signature. Then, each block records this transaction to validate it by verifying the hash of the blocks. Moreover, all users connected to the blockchain contain the same updated copy of data which shows transparency within the network. After the successful verification, it is permanently added to the chain of blocks.

Figure 3. A workflow of the blockchain process.
The distributed nature of the blockchain benefits the WNs in various ways, such as handling the single-point failure issues, incorporating trust mechanisms, secure access control, and preserving the user privacy [37]. It enforces the new security advances to protect the WN from modern security threats, such as cryptojacking and ransomware. Toward this goal, when the WN user publishes (store) the data on the blockchain, it is difficult for an adversary to modify them because of the immutability feature of the blockchain technology. In addition, blockchain immutability can find internal and external attackers by analyzing the change in the hash of the blocks [38][39]. Figure 4 illustrates unique features of blockchain that strengthen WNs. 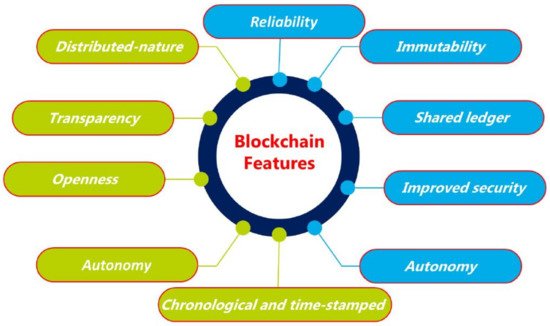 5. Blockchain: A Solution for Security and Privacy in WNs 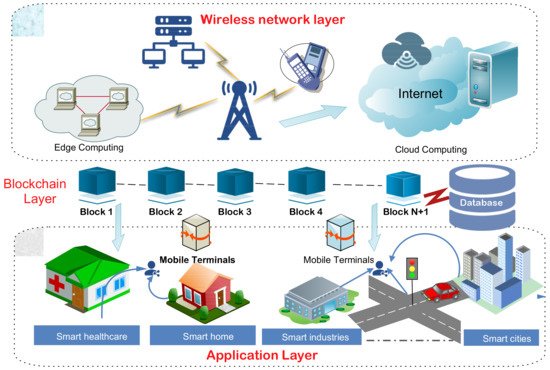 This layer comprises various smart applications, such as smart healthcare, smart cities, smart industries, etc. The smart application components are linked via a wired or wireless connection. In the case of wireless connection, communication happens between two users using a mobile terminal. For example, the energy bill is generated through smart meters in the smart home. The energy bill is shared with the consumer (who is consuming energy) and the smart grid administrator via WNs (e.g., 4G or 5G). During data transfer, communication is established from a user device, such as a computer or smartphone to the nearest access point of the WN layer. Then it is transferred further to the intended destination. In the proposed architecture, communication between the application and WN layers through the blockchain layer is discussed in detail in the next section.

This is the middle layer in the proposed architecture, which establishes secure communication between the WNs layer and the application. First, data generated at the application layer are captured using the blockchain layer over the blocks. Once it is captured, one cannot alter it due to the immutability feature of blockchain. Then, the data are transferred from the source to the destination node securely using the WN layer. In WNs, blockchain technology offers numerous security services like access control, data integrity, and authentication, which are as follows [10]:

This layer comprises various 6G services across several vertical sectors, such as vehicle-to-vehicle (V2V), D2D, virtual reality (VR), augmented reality (AR), video streaming, and collaborative gaming to the users residing in the application layer. In addition, it also consists of breakthrough technologies, for instance, SDN, NFV, cloud computing, and many more, that assist in meeting the significant specification of future WNs. The aforementioned services use the precarious wireless networks that hinder the performance of the 6G-based WN applications. This layer plays an important role in establishing a secure connection between sender and receiver using the blockchain layer. Enabling blockchain in WNs can ensure security and reliability in the network by securely storing the data in a distributed manner, i.e., no single stakeholder controls the data; the data are distributed to all the authenticated members of the blockchain. Then, the stakeholder requires a smart contract to establish a service level agreement (SLA) with communicating parties to place the 6G services on lease or share it. The smart contract also automates the resource allocation process (resources such as channel, spectrum, and power) and network orchestration that involve several stakeholders across the entire WNs to provide smooth and transparent service to end-users. Blockchain as the whole process is secure, reliable, and auditable. This integration of blockchain and WNs deliver services that create several other challenges, such as network resiliency, robustness, and data integrity.