+1 point
Thank you for your contribution! You can also upload a video entry related to this topic through the link below: https://encyclopedia.pub/user/video_add?id=24513
Check Note
2000/2000
Developing Yoghurt as Functional Food

Edible coatings and films appear to be a very promising strategy for delivering bioactive compounds and probiotics in food systems when direct incorporation/inoculation is not an option. The production of dairy products has undergone radical modifications thanks to nanotechnology. Despite being a relatively new occurrence in the dairy sector, nanotechnology has quickly become a popular means of increasing the bioavailability and favorable health effects of a variety of bioactive components.

Yogurt is a fermented dairy product created by two types of lactic acid bacteria, primarily Streptococcus thermophilus and Lactobacillus delbrueckii subsp. bulgaricus. Without the use of rennet, this fermentation causes acidification and coagulation, as well as an increase in shelf life due to the low pH. [1]. Many studies have looked into supplementing probiotic strains to yogurt in addition to the standard starter culture to boost the health benefits. Bio-yoghurt or functional yoghurt is the resultant yoghurt with probiotic bacteria [2]. Probiotic bacteria are defined as living microorganisms administered in a sufficient number to survive in the intestinal ecosystem, and must have a positive effect on the host [3].
Set-type or firm, frozen, sipping, stirred, powder, or concentrated, are texture classifications; natural, flavored, sweetened, or with added bits of fruits (fresh or dried) or honey are flavor classifications; fat and lactose residual content are shelf life and nutritional value classifications [4]. There’s also a classification based on health advantages. Weerathilake et al. [5] have also reviewed the many varieties of yoghurt. It was based on physical and chemical properties, as well as added flavors and post-incubation treatments. El-Sayed et al. [6] recently used spray drying to make functional yoghurt powder and studied the survival of Lactobacillus helveticus CNRZ32.

1.2. Materials Used in the Manufacture of Yoghurt

A number of ingredients are needed to produce yoghurt, including starter, stabilizers, sweetener materials, fruits, and flavorings. In the yoghurt industry, yoghurt and yoghurt starters are among the most important ingredients, if not the most important. To obtain good sensory, chemical, and microbiological yoghurt, high-quality milk must be utilized. Different gums, e.g., alginate, xanthan gum, or gum arabic alone or in combination with maltodextrin, can be used as excellent coatings materials and can be proved as functional ingredients in yoghurts, not only as stabilizers or fat replacers, but as prebiotics as well. The type of milk used in yoghurt production is determined by the type of civet to be produced [5]. To fulfill the demands and expectations of some groups of customers in the community, yoghurt can also be manufactured from non-dairy milk or plant milk [7]. Coconut, soy or peanut milk, coconut with hemp milk, combined cow milk and coconut milk, barley milk, rice, guardar cereal, almonds, and other plant sources can be considered great functional components in the preparation of yoghurts.

The principal methods of manufacturing yoghurt in traditional ways are by adding starter cultures (Streptococcus thermophilus and Lactobacillus bulgaricus). Many additives can be added to yoghurt, especially if the purpose is to make a functional and healthy yoghurt. Desired additives are added to yoghurt throughout the manufacturing process in a very traditional way. Furthermore, Omega-3 polyunsaturated fatty acids (PUFA) are an important class of fatty acids, renowned for their health and nutritional benefits for people of all ages, and adding them to yoghurt amplifies those benefits [8]. Bello et al. [9] added Camelina sativa, Echium plantagineum, flaxseed, blackcurrant, and raspberry to milk prepared for the manufacturing of yoghurt before the fermentation process. However, the reports suggested that high content of α-linolenic acid in flaxseed and black currant oils can be capitalized through using it in yoghurt. Many other kind of fiber sources have been added, which has improved the texture, such as the addition of coconut flour [10][11][12], a great source of fiber, antioxidants, phenols, and probiotic bacteria for bio-yoghurt, with a distinct taste and smell and suitable for inclusion in a school meal for children. The yoghurt fortified with minerals to enhance the nutritional benefits, along with addition of the minerals in nanoparticles form, such as selenium, that is prepared by biological method using lactic acid bacteria as green nanotechnology may be a different class of yoghurt having maximum nutritional value [13].
The main starter culture used in yoghurt preparation are Streptococcus thermophilus and Lactobacillus bulgaris. Further, the main stabilizers used in yoghurt preparation are alginates (carageenan), gelatins, gums (locust bean, guar), pectins, and starch. However, plain yoghurts are not good in taste; therefore, in order to add taste in it, sweeteners, such as sucrose, saccharine, Acesulfame-K, and Aspartame, are added to it. In some cases, maple syrup is also added to the yoghurt. However, some are allergic to natural sweeteners, and, in such cases, artificial sweeteners are added to it. Moreover, a fact that should be taken care is of shelf life of yoghurt which is always less. As a result, preservatives must be added to extend the shelf life of the yoghurt. Sodium benzoate, potassium sorbate, and natamycin are examples of chemical preservatives. Natural preservatives, such as nisin and -polylysine, on the other hand, can be utilized to extend the shelf life of yoghurt. To increase the quality of the yoghurt, skimmed milk powder, whey powder, inulin, fruits, casein powder, and vitamins are sometimes added.

Yogurt has a number of beneficial effects on human health, particularly when consumed on a daily and consistent basis, as shown in Figure 1 [67]. Probiotics are living and active bacteria found in fermented dairy products, particularly yogurt. These bacteria have been demonstrated to promote gut health by favoring the growth of “preferred” bacteria over “undesirable” bacteria. One of the most significant technological advancements in the production of yoghurt has been the development of healthy yoghurt that has a clear influence on the diseases of the time, either by preventing injury or by improving the condition and lowering the symptoms associated with injury. Alzheimer’s disease is one of the most common age-related diseases, and the most important and recent studies on the condition will be discussed, with yoghurt content on probiotics as a beneficial form of disease protection and treatment. 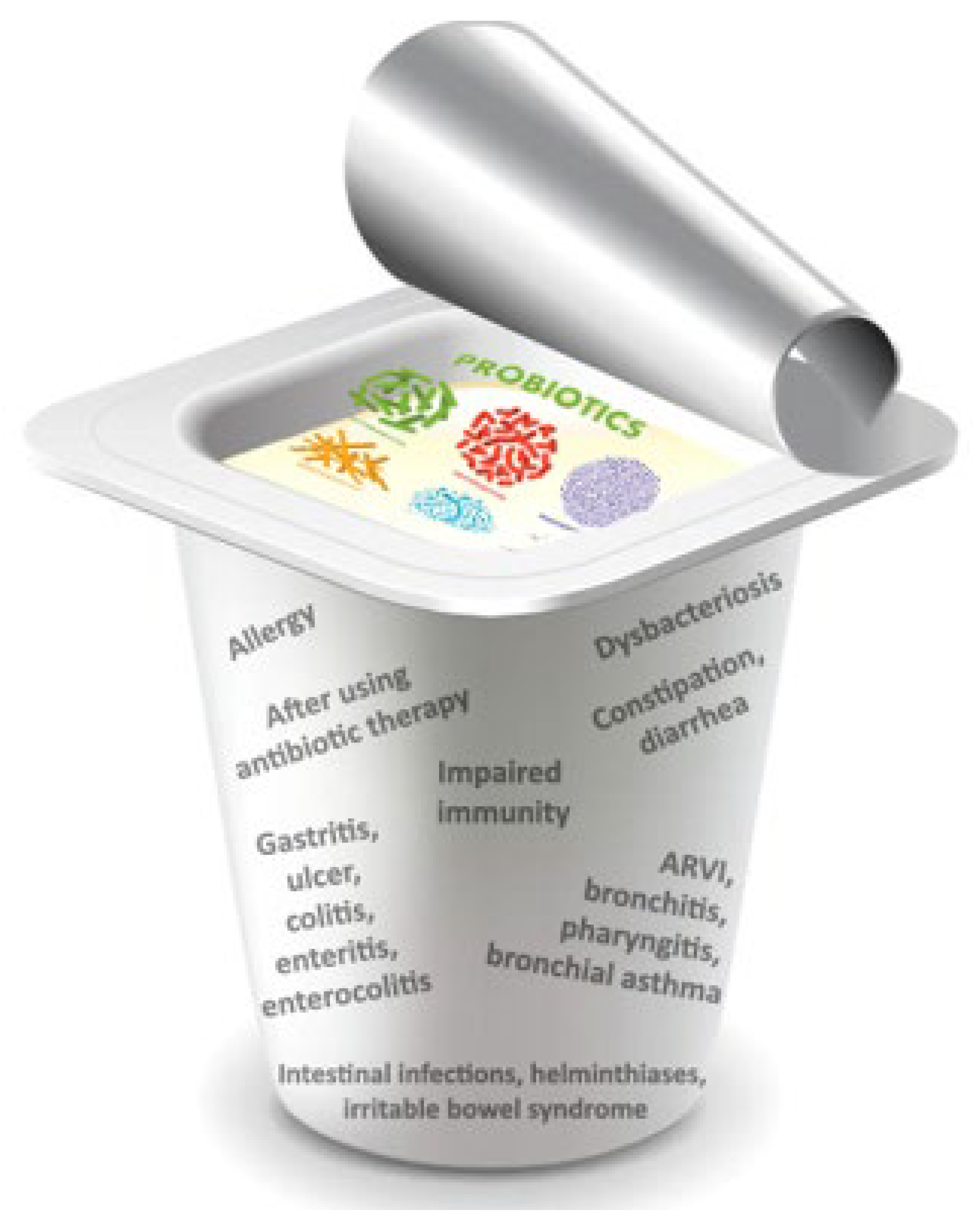 More
© Text is available under the terms and conditions of the Creative Commons Attribution (CC BY) license; additional terms may apply. By using this site, you agree to the Terms and Conditions and Privacy Policy.
Upload a video for this entry
Information
Subjects: Agriculture, Dairy & Animal Science
Contributors MDPI registered users' name will be linked to their SciProfiles pages. To register with us, please refer to https://encyclopedia.pub/register :
Heba Hassan Salama
,
Monica Trif
,
Alexandru Vasile Rusu
,
Sourish Bhattacharya
View Times: 286
Revisions: 2 times (View History)
Update Date: 28 Jun 2022
Table of Contents
1000/1000
Hot Most Recent