Submitted Successfully!
Thank you for your contribution! You can also upload a video entry related to this topic through the link below:
https://encyclopedia.pub/user/video_add?id=24466
Check Note
2000/2000
Ecological Succession Theory
Edit
Upload a video
This entry is adapted from 10.3390/land11050718

In addition to states of space that are supposedly to be aspired to or maintained, which are often the subject of heated, acrimonious debates, there are temporary states of equilibrium in time that mirror the overarching cycle of life, have been the subject of research for a very long time, and are well documented and conceptually understood: namely, ecological succession. The knowledge and understanding of succession is irreplaceable to have a chance today to ground and resolve such mentioned debates about multiple claims and uses of spaces nowadays. For example, a main challenge of the current time is that large areas of land are needed for renewable energy production, and production sites should be designed to include biodiversity preservation. Decision-makers need guidance for reasonable coexistence. Succession theory can indeed provide substantial background and guidance.

For about a century, vegetation scientists have studied the lawful succession of plant communities [1]. Over this time, ecological succession, i.e., when a new physiognomy takes over, as in the transition from the open-land stage with grasses and herbs to a woody stage, has been well studied [2][3][4]. Of particular note is the Connell-Slatyer model of ecological succession, which advanced the understanding of successional mechanisms and proposed that there are three modes of successional development [5]. Accordingly, three key factors occur, namly facilitation, tolerance and inhibition. E.g., if the initial colonizers on newly exposed landforms enable or significantly facilitate the establishment of later species, this is constent with the facilitation model. The ultimative explanation is that individuals and communities of individuals possess either predominantly "colonizing" qualities, such as highly effective methods of dispersal, or rather "competitive, enduring" qualities, which are impossible to maximize simulaneously due to trade-offs.
Today, new disciplines are also building on this understanding, or rather, the context-dependent understanding of successional processes is highly relevant to study the responses of species, plant communities, and entire ecosystems to dynamic processes [1]. It also seems possible to derive good professional practice for the nature-friendly design of landscapes with renewable energies. The energy and climate crises must both be addressed while the biodiversity crisis is at least not further exacerbated; understanding succession against the backdrop of renewable energy sites is key to the balance that is needed.
While technical overprinting (also via installations for energy generation) by man always taking out dynamics, succession theory provides the idea that a current situation or association is a precursor for something else to come (facilitation, [5]), that dynamism rather than stagnation is natural, and that a variety of dynamic developments are directional. Studies available in early 2022 have conceptually stated that the goal is to mediate between different land uses and to show how commercial and conservation outcomes can be achieved simultaneously (e.g., in the design of solar parks [6][7]). Therefore, the realization that solar parks are being built on more and more land and should also take nature conservation aspects into account does not need to be addressed anew. However, sometimes targets for nature conservation overshoot the mark or lack professional evidence, for example when conditions are imposed on certain bird species that ignore the intrinsic nature of these species and the ground-mounted solar plants. Overall, the current lack of references or an evidence base calls for further research, and the potential of exact field data for nature protection and appropriate management should be recognized.
Understanding how plants, animals and other organisms respond to changes in their environment over time is key to successful restoration, rewilding, and habitat management for the sustainable provision of ecosystem services. Birds respond to changes in ecosystems and are therefore considered sensitive bioindicators [8][9]; this applies primarily or especially to persistent long-term changes in the environment [10]. Thus, wider habitat use by birds and the bird communities that are found in different habitats coincide in the longer term [10], and directional habitat dynamics, e.g., ecological succession, goes hand in hand with succession in bird communities [11]. Forest development phases affect the distribution of breeding birds, as phases represent different forest habitat conditions [12]. Comparatively much more pronounced changes in habitat conditions take place in early successional habitats [13].

2. Empirical Time Series from the Hühnerwasser Catchment, a Subject of Interdisciplinary Research to Date

In the post-industrial landscape of Lusatia, Germany, the artificial Hühnerwasser catchment (also called Chicken Creek catchment), was created in autumn 2005 in part of the Welzow Süd open-cast lignite mine that was reclaimed after mining [14]. The restoration aim was to reissue the original natural spring that had been completely destroyed by the mining activities as well as its catchment.
Over time, the catchment area developed from exclusively open, bare ground with a pond in 2005, via initial successional stages [3][13], to pre-forest tree and shrub cover in 2021 (Figure 1 and Figure 2). This development came about through nature alone. There have been interdisciplinary scientific investigations on the genesis of the area under the umbrella of the Collaborative Research Centre/Transregio 38: “Structures and processes of the initial ecosystem development phase in an artificial water catchment” [15][16] since mid-2007. Regular and frequent high-resolution vegetation monitoring showed an overall increase in vegetation density and diversity over time [3][13]. 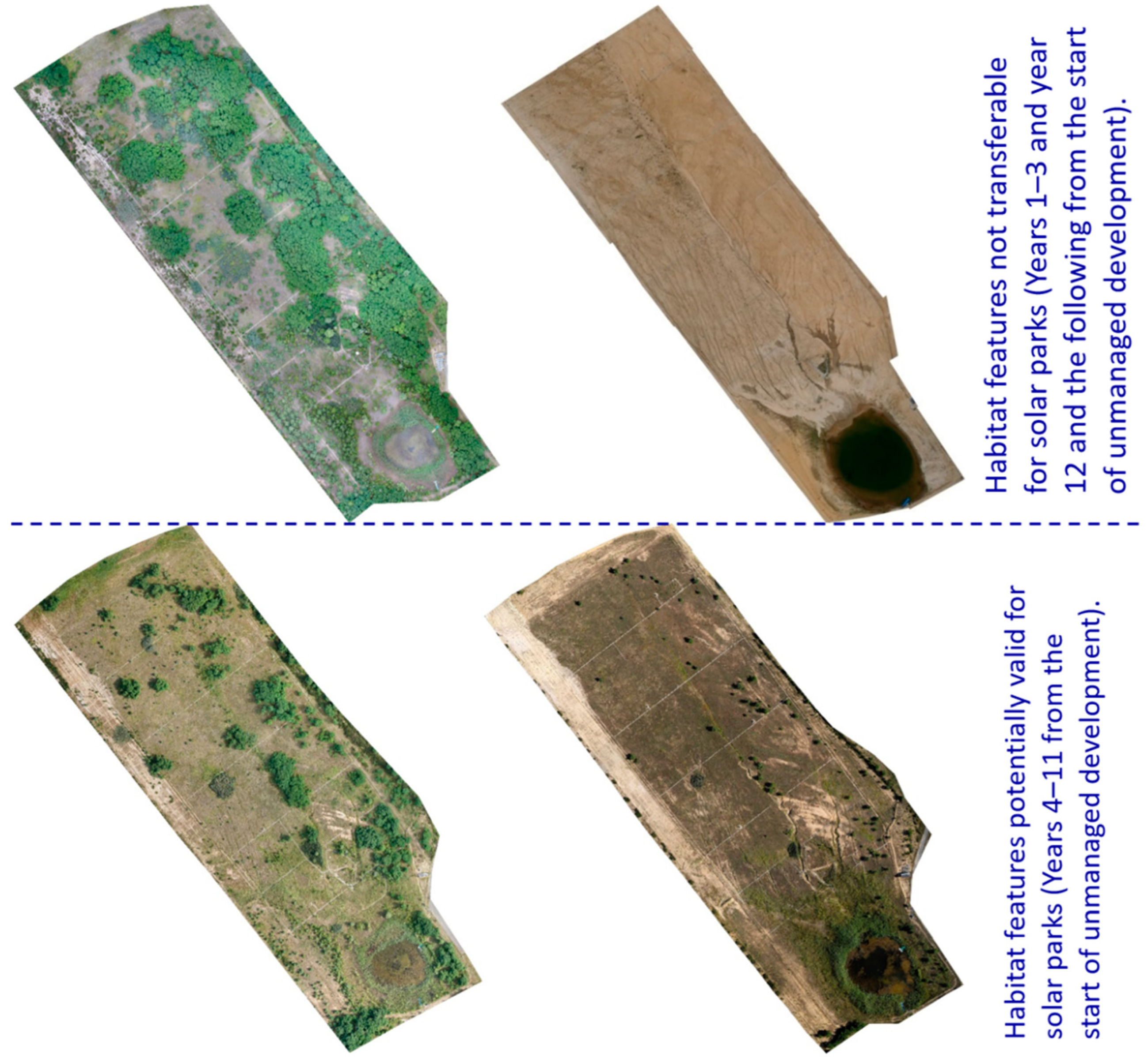 Figure 1. Development of the Hühnerwasser catchment, clockwise from top right—as bare ground in 2007 (top right), 2011 (bottom right), 2015 (bottom left), and 2020 (top left). Thanks to the Research Center Landscape Development and Mining Landscapes of the Brandenburg University of Technology Cottbus-Senftenberg for providing the aerial photos, each composed of many drone photos. North is always at the top. A scale bar cannot be given, but the spacing of the paths—which are particularly well visible as grey lines in the 2011 representation (bottom right)—is 60 m, and 40 m when close to the pond. 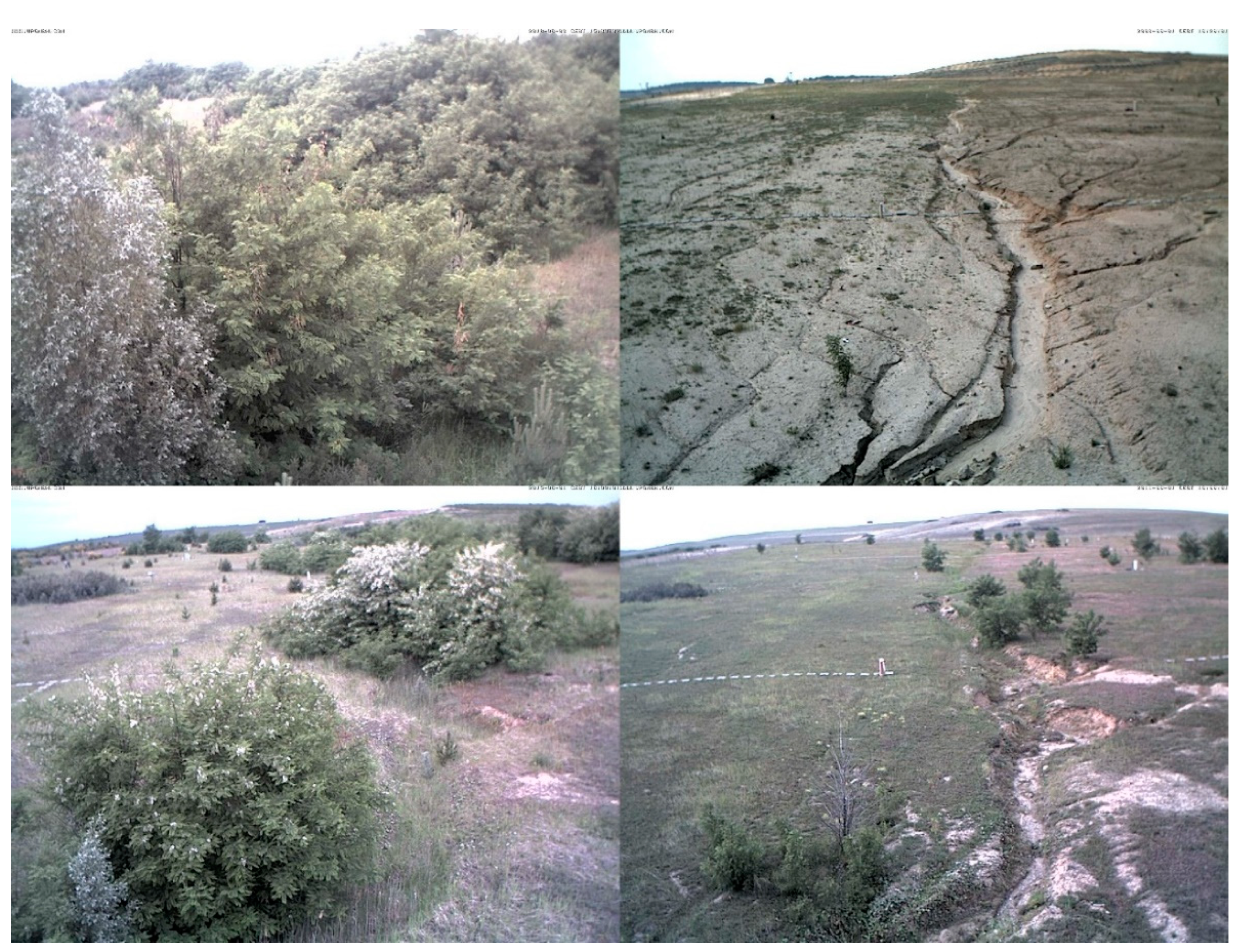 Figure 2. View north over the Hühnerwasser catchment area, from a webcam mounted at 6 m height. The date of each photo is June, clockwise from top right—in 2008 (top right), 2011 (bottom right), 2015 (bottom left), and 2018 (top left).
Change over time in the Hühnerwasser catchment (directed dynamics, i.e., ecological succession) has already been demonstrated for vegetation [3] and for soil fauna such as nematodes [17] and tardigrades [18]. Researchers document the avifauna observed, and integrate the bird data with key floristic data. Results on phased vegetation dynamics from the Hühnerwasser catchment have already contributed to succession theory [19]. It has been shown that the bird life of a larger post-mining landscape is also dynamic [20].

The Hühnerwasser catchment is similar to ground-mounted solar parks in that both areas began with more or less open ground conditions; have vegetation that is dominated by grassy strata (temporarily in the Hühnerwasser catchment); have no fertilizers, pesticides or pest control applied; have technical installations that need to be maintained; and are fenced to limit access. In areas of land used as solar parks, natural processes, especially succession, are repressed or restricted from a certain point onwards: The dynamics of plant growth are controlled and limited due to yield expectations and the demand for economic efficiency, and tall plants are not tolerated in the current design of such installations due to yield-reducing shading effects. However, in the course of increasingly strong demands for naturalistic designs of solar parks and also as visual protection, there is a tendency to establish taller herbaceous fringes and woody plants in edge areas, and taller, structurally diverse vegetation enhances pollinators in solar parks [21].
Large areas of land are already used for solar parks, and land-use for solar technologies will continue to increase over the coming years during the transition to sustainable energy [22][23]. Questions about their conservation value are important and topical [24].
The effects of individual solar parks on birds have been the subject of numerous unpublished reports, often as a requirement of licensing authorities (e.g., in Germany, Poland, and the Czech Republic). Although there have been some reviews, a complete picture providing a useful basis for bird conservation action at solar parks has not yet emerged. An initial placement in the context of succession theory and empiricism transferred from Hühnerwasser Catchment is provided by Zaplata and Dullau (2022 [25]).

More
© Text is available under the terms and conditions of the Creative Commons Attribution (CC BY) license; additional terms may apply. By using this site, you agree to the Terms and Conditions and Privacy Policy.
Upload a video for this entry
Information
Subjects: Ecology ; Ornithology ; Biodiversity Conservation
Contributors MDPI registered users' name will be linked to their SciProfiles pages. To register with us, please refer to https://encyclopedia.pub/register :
Markus Klemens Zaplata
,
Sandra Dullau
View Times: 49
Entry Collection: Environmental Sciences
Revisions: 4 times (View History)
Update Time: 27 Jun 2022
Table of Contents
1000/1000
Hot Most Recent