+1 point
Thank you for your contribution! You can also upload a video entry related to this topic through the link below: https://encyclopedia.pub/user/video_add?id=24228
Check Note
2000/2000
Botulinum Toxin Type A

Botulinum neurotoxin A (BoNT-A) which is generally known as anti-contraction of muscles has been reported as a successful treatment in various types of chronic ulcers.

Normal physiologic wound healing happens in three highly integrated and overlapping phases: inflammation, proliferation, and remodeling [1][2][3]. Good blood circulation, proper immune function, and adequate nutrition are required for optimum healing [1][4]. When any phase is disrupted, healing might be impeded and turned into chronic ulcers which are generally known as loss of normal skin integrity for more than 6 weeks [5][6][7]. Many factors attribute to retard wound healing. For instance, vascular insufficiency, neurologic abnormalities, nutritional deficiencies, advanced age, chronic diseases, and local wound infection can all disrupt the healing process [1][8][9][10]. Not only removing primary underlying causes but also following principles of wound care such as appropriate tissue debridement and optimal moist environment for normalization of the wound healing process is essential [1][11][12]. However, unsatisfied outcomes still exist [6][13][14].
Botulinum toxin is a neurotoxin produced by Clostridium botulinum [15]. It has long been known for its action in preventing the release of the neurotransmitter acetylcholine from axons at the neuromuscular junction and temporally inhibiting muscle contraction. So far, there are seven serotypes (A, B, C1, D, E, F, and G) [16]. Serotypes A and B are currently in clinical usage, but botulinum neurotoxin A (BoNT-A) is the most commonly used [15][16]. Concerning temporary muscle paralysis capability, wide clinical treatment has been adopted [16][17][18]. Apart from inhibiting acetylcholine release from a presynaptic neuromuscular junction, studies found that BoNT-A can reduce skin inflammation by inhibiting mast cell degranulation and blocking cholinergic stimuli to apocrine and eccrine glands [19].

2. Mechanism of BoNT-A on Wound Healing

Normal physiologic wound healing is a dynamic process consisting of different continuous, overlapping, and precisely programmed phases [1][3][11]. Any disruption in the process leads to abnormal wound healing or chronic unhealed ulcers [12]. The literature review found BoNT-A can enhance wound healing in various types of ulcers. Several studies that investigated mechanisms of BoNT-A on wound healing found that BoNT-A decreased inflammatory cell infiltration during the inflammatory phase [20][21][22]. Inhibition of mast cell degranulation and reduction in number were reported [19][23]. Reduction in vascular permeability and exudation of neutrophils and macrophages were also observed. Consequently, pus deposition on ulcers was reduced [24]. Furthermore, during the proliferative phase, it could enhance blood flow and promote vascular sprouting by increasing expression in CD31+, ∝SAM (+) pericytes, as well as fibroblasts [25][26][27][28]. It could be due to a reduction of reactive oxygen species (ROS) release and endothelial nitric oxide synthase (eNOS) in the hypoxic area [25][29]. Altogether, granulation tissue was created and filled the wound. It also can inhibit releasing norepinephrine resulting in vasodilatation and increasing oxygenation to the wound [30]. In the period of the remodeling phase, lower expression of TGF-β1 by BoNT-A was found which reduces the risk of fibrosis and scar formation [24]. Figure 1 shows a mechanism of BoNT-A in wound healing for comprehensive understanding. 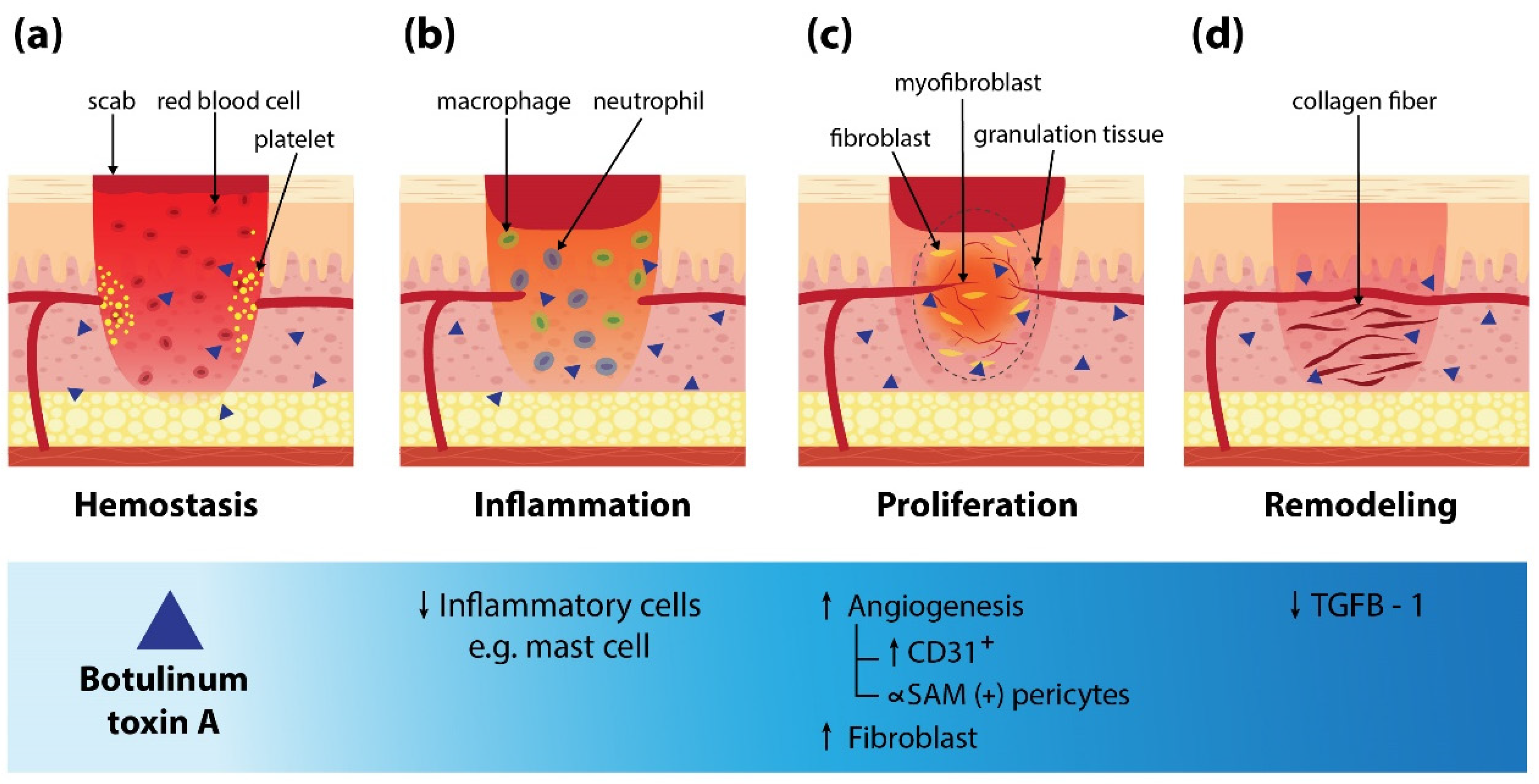 Figure 1. The proposed mechanisms of botulinum neurotoxin A in the wound healing process. TGFβ-1: Transforming Growth Factor β-1.
For miscellaneous types of chronic ulcers, BoNT-A has been proposed to hasten wound healing by inhibiting sweat-induced maceration of the fragile epidermis to optimize the wound environment [31]. 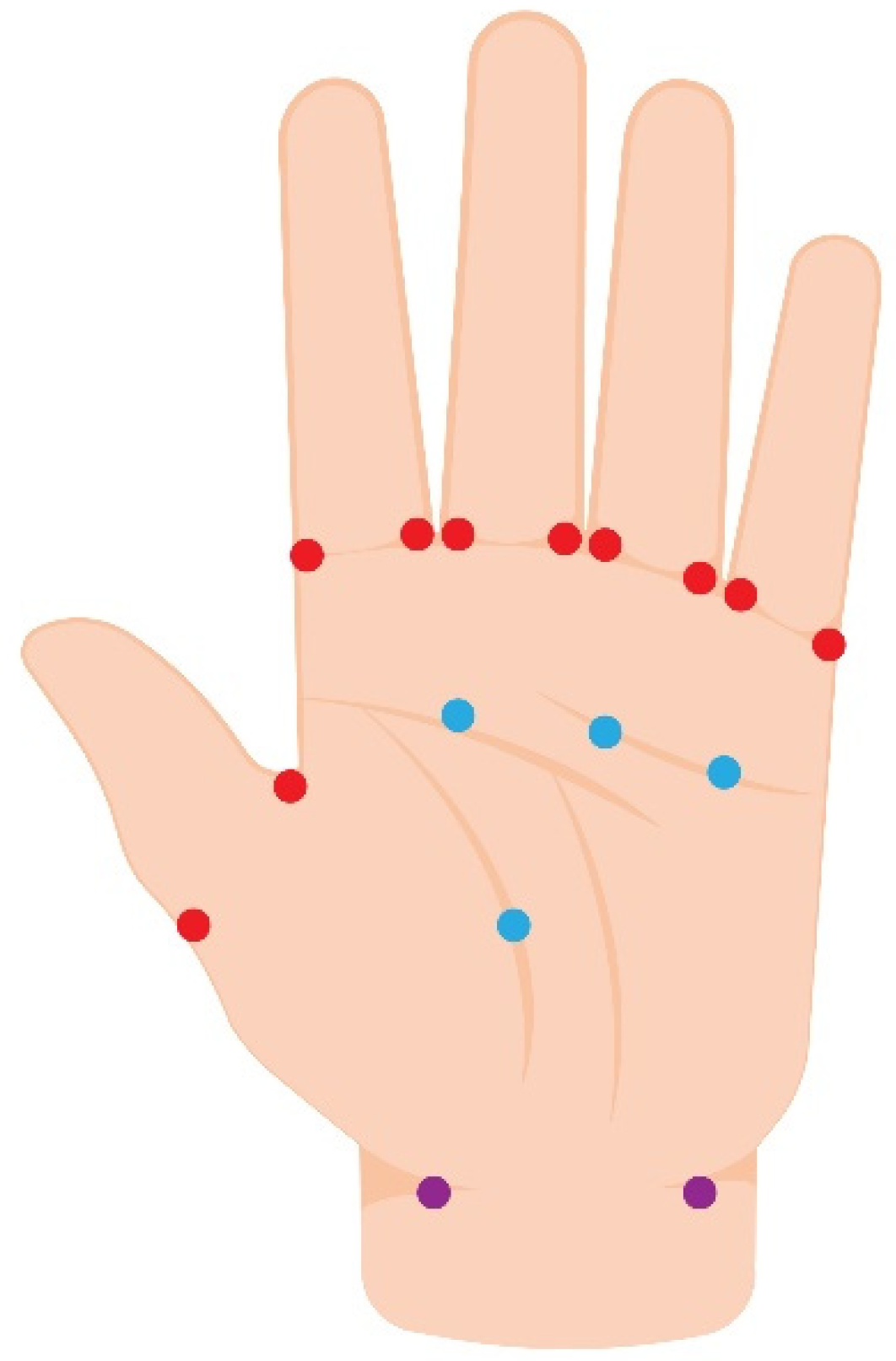 Figure 2. The BoNT-A injection patterns for Raynaud’s phenomenon-associated ulcer. Red dots represent the base of the digit injection pattern. Blue dots identify the palmar injection pattern. Purple dots identify the proximal hand injection pattern.
Parameters tracked outcomes consisted of objective and subjective measurements. Among objective measurements, arterial blood flow was evaluated by using ultrasonography or doppler perfusion imaging, while skin surface temperature was assessed by a thermometer or temperature recovery after ice-bath immersion [42]. In terms of subjective assessment, a visual analog scale (VAS) for pain, general RP symptoms using Raynaud’s score [50], digital color changes, and patient global assessment were used. However, for healing ulcers, no wound assessment scale was used. Investigators merely monitored ulcers as complete, partial healing, and no response.
Of a total of 104 cases with RP-associated ulcers, 81% (84 of104 cases) had healed completely. Immediate improvement of blood flow, pain, temperature, and color after injection was noted [37][41]. Raynaud’s score and VAS for pain decreased at 2 weeks and persisted until 16 weeks after injection [42].
One case report presented a 55-year-old woman who was diagnosed with limited cutaneous systemic sclerosis with refractory multiple digital ulcers. She failed many medical treatment regimens and underwent amputation once. During the period of critical ischemic digits which further amputation was nearly executed, BoNT-A was challenged, and digits were rescued with complete wound healing eventually [43]. Another case report showed a 48-year-old male who was diagnosed with anti-MDA5-Ab-positive dermatomyositis with refractory digital ulcers had an improvement in ulcers after BoNT-A injection [44].
According to a 3-year follow-up study by Medina et al., 8 of 14 patients (57.1%) demonstrated a very good response at 1 month after treatment. A mild to moderate response was observed in three patients (21.4%). Of the seven patients with basal ulcers, five were completely healed at 3 months after treatment. At the end of treatment, 64.3% of patients showed an overall satisfaction level of >8 [45].
However, some patients with RP showed no response to BoNT-A injection which resulted in amputation. Therefore, the discussion with patients before employing this technique is mandatory [39][45][46].

Regarding the point of injection, BoNT-A can be injected directly into abnormally contracted muscle or under electromyographic guidance [52][53][54]. The number of injection points was considered based on the size of muscles. According to a report by Insito et al., abobotulinum toxin with doses of 200 and 120 speywood unit (SU) was injected into orbicularis oris and masseter in a vegetative state patient with oromandibular dyskinesia [54]. Regarding the larger size of muscles such as Gluteal muscle, a high dosage of 660 SU was used [53]. Gupta and Wilson reported a dosage of onabotulinum toxin ranging from 100 to 150 units per muscle [52]. Abnormal contraction or spasticity were improved as early as 1 week after treatment [5]. All ulcers were reported as complete healing with the most delayed time period of 6-month follow-up [53]. The number of treatment sessions varied from one to two sessions. A repeated treatment session might be considered in patients with partially healed ulcers to maintain the weakness of muscles. Data regarding the use of BoNT-A in pressure ulcers is summarized in Table 2.

Table 2. A summary of articles on the treatment outcome of other types of chronic ulcer.

Posttraumatic ulcers associated with vascular compromise (e.g., crush, direct drug injection, proximal arterial injury from catheterization, etc.) were reported successfully treated by BoNT-A [58][59]. According to a retrospective cohort study by Laarakker et al., patients with traumatic ischemic ulcers were categorized into two groups (BoNT-A treated group vs. non-BoNT-A group). In the BoNT-A treated group, 80 to 100 units of onabotulinum toxin were injected into the palm of each patient. The location of injection was at the level of the distal palmar crease and close to the radial and ulnar arteries. All digits (100%) were rescued for the BoNT-A injection group, while 83% had amputation of necrotic digits in patients without BoNT-A injection [58]. In addition, pain scores were lower in BoNT-A-treated fingers when compared to no BoNT-A injection. The postulated mechanism was the improvement of blood flow by BoNT-A. Another traumatic ulcer on the hand of a 4-year-old child was rescued without amputation by administration of 10 units BoNT-A into the proximal palm, the radial and ulnar artery locations of the distal forearm [59]. Data regarding the use of BoNT-A for traumatic ulcers is summarized in Table 2.

BoNT-A for Other Types of Chronic Ulcers

Neuropathic foot ulcer has been reported to be successfully treated by two sessions of BoNT-A injection [61]. The amount of 70 units of onabotulinum toxin was infiltrated around the ulcer with a repeated injection at 3 months with a similar dosage. The proposed mechanism was a reduction of sweat-induced maceration and optimization of the wound-healing environment.

Zhong et al. reported various types of chronic ulcers that have been successfully treated by BoNT-A administration in four patients [60]. One interesting case was a chronic infective skin ulcer on the left temporal region due to acne squeezing. After systemic antibiotics and debridement, there was a slight improvement in the ulcer. Multiple points of BoNT-A injection around the ulcer were done with 32 units in total. The wound was completely healed 20 days after injection. Data regarding the use of BoNT-A for other types of chronic ulcers is summarized in Table 2.

To date, a standard guideline for BoNT-A injection for chronic ulcers has not been established yet due to a lack of strong evidence that supports the efficacy of BoNT-A for skin ulcers. Based on the available data, BoNT-A might be offered to patients with chronic skin ulcers due to vascular compromised (i.e., RP-associated ulcer, pressure ulcers with vascular compromised), traumatic ulcers, etc. (Figure 3). BoNT-A for RP-associated ulcers seems to be the most promising efficacy and established treatment method. Nevertheless, its harmlessness and ubiquity make it worth trying for those chronic ulcers that failed standard therapy. Adverse effects were mild and temporally, an intrinsic hand muscle weakness has been reported which resolved completely within 5 months [41][43][49][50]. In terms of point of injection, the recommendation is to consider the type of ulcer including 1) ischemic ulcers: inject toward neurovascular bundles for vasodilation [41][42][43][46][49][50][51]; 2) pressure ulcers: inject into contracted and spastic muscles for muscle relaxation; and 3) other types: inject around the ulcer to optimize wound environment [60][61]. Dosage and reconstitution should be considered individually depending on wound size or volume of muscle. 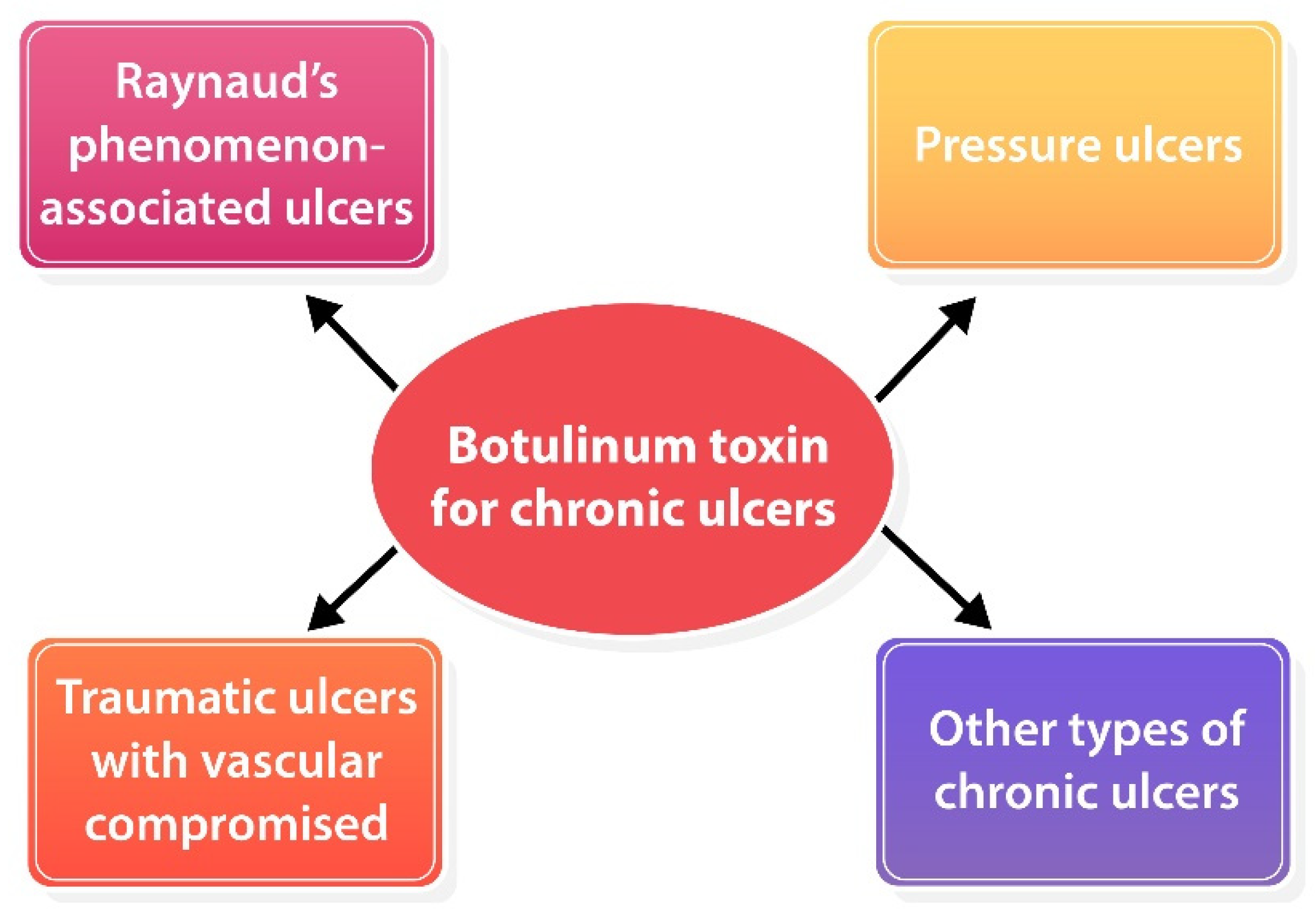 In summary, BoNT-A injection, a minimally invasive procedure that has a low rate of side effects can be adjunctive therapy for enhancing wound healing in various types of chronic ulcers that have been treated for underlying causes and had wound care properly as well as in ischemic ulcers associated RP in which failed conventional therapy. However, there is no randomized controlled trial study (RCT) with a large number of patients to affirm those efficacies. The amount of BoNT-A injection and the exact point of injection is still uncertain. Future randomized controlled studies should be conducted to evaluate the efficacy and safety of BoNT-A for various types of ulcers with different anatomical regions.

More
© Text is available under the terms and conditions of the Creative Commons Attribution (CC BY) license; additional terms may apply. By using this site, you agree to the Terms and Conditions and Privacy Policy.
Upload a video for this entry
Information
Subjects: Cell Biology
Contributors MDPI registered users' name will be linked to their SciProfiles pages. To register with us, please refer to https://encyclopedia.pub/register :
Waranaree Winayanuwattikun
,
Vasanop Vachiramon
View Times: 109
Revisions: 3 times (View History)
Update Date: 22 Jun 2022
Table of Contents
1000/1000
Hot Most Recent