+1 point
Thank you for your contribution! You can also upload a video entry related to this topic through the link below: https://encyclopedia.pub/user/video_add?id=23929
Check Note
2000/2000
Microalgae Bioactive Compounds to Topical Applications Products

Microalgae are complex photosynthetic organisms found in marine and freshwater environments that produce valuable metabolites. Microalgae-derived metabolites have gained remarkable attention in different industrial biotechnological processes and pharmaceutical and cosmetic industries due to their multiple properties, including antioxidant, anti-aging, anti-cancer, phycoimmunomodulatory, anti-inflammatory, and antimicrobial activities. These properties are recognized as promising components for state-of-the-art cosmetics and cosmeceutical formulations.

Algae are a diverse group of photosynthetic eukaryotic microorganisms that possess different structures and forms and can be divided into either macro or microalgae based on their size. Many microalgae species have been identified as having various biochemical characteristics associated with nutritional benefits and human health.
Microalgae synthesize an extensive diversity of compounds from different metabolic pathways such as amino acids, fatty acids, lycopene, polysaccharides, steroids, carotenoids, lectins, polyketides, toxins, etc. Some of these are shown in Figure 1. 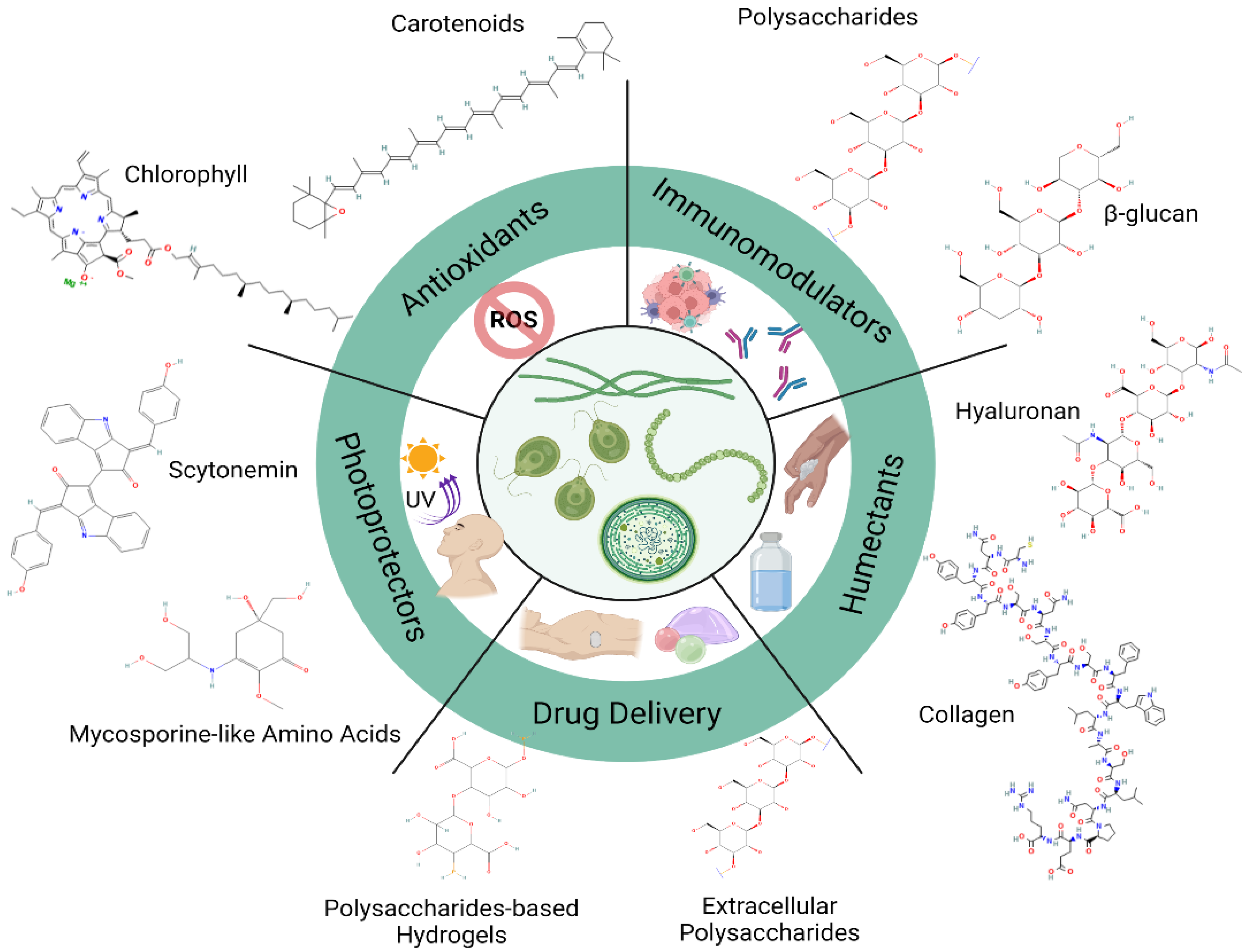 2. Immunomodulatory Activity of Compounds from Microalgae

Microalgae and cyanobacteria serve as a source of bioactive compounds that present immunomodulatory activity, such as amino acids [5][6][7], peptides, pigment-protein complex, and exopolysaccharides, the latter known to possess anti-inflammatory, antimicrobial, and antiviral properties [2][8][9][10][11]. The major sugars involved in the composition of polysaccharides are xylose, glucose, mannose, and galactose [12]. Specifically, sulfated polysaccharides have been associated with blood coagulation, antilipidemic activity, and mainly immunomodulatory activity [8]. Multiple studies have reported anti-inflammatory properties from Arthrospira/Spirulina, Chlorella vulgaris, Chlorella pyrenoidosa, Isochrysis, Pleurochrysis carterae, Dunaliella, Porphyridium purpureum, and Rhodosorus marinus [6][12][13][14][15][16].
Immunomodulatory agents refer to compounds that increase (immunostimulators) or decrease (immunosuppressants) the response of the immune system. In cosmetology, topical immunomodulators are used to regulate the local immune response of the skin to treat a wide range of skin diseases [17][18]. Moreover, topical immunomodulators are easier to apply and safer for longer periods in comparison with systemic immunomodulators [17][18][19].
Anti-inflammatory, antitumoral, antimicrobial, and antiviral properties from a wide variety of compounds are directly linked to immunomodulator activities as they work synergistically with the immune system to elicit an anti-inflammatory response against damaged tissue or act against external microorganisms, interfering with their growth and activating apoptotic cell death. All of these properties have made microalgae metabolites feasible for use as immunotherapy to treat some of these disorders, as mentioned before [5][6][7].
The immune system coordinates its response via multiple signaling pathways, and these responses when unregulated contribute to the pathogenesis of chronic inflammatory skin diseases [20]. The immunomodulator mechanisms include cytokines, interferons, interleukins, and tumor necrosis factors, secreted primarily by macrophages, lymphocytes, and keratinocytes in the epidermis [5][21]. Additionally, various factors such as uncontrolled responses to pathogens, toxic substances and reactive oxygen species (ROS)-mediated oxidative stress promote the release of pro-inflammatory mediators [5][22]. Accordingly, immunomodulatory agents are used to inhibit inflammatory responses and fight diseases.
In vitro and in vivo studies have shown the immunomodulatory and anti-inflammatory potential of microalgae-derived bioactive compounds and extracts [23][24][25]. In vitro studies of sulfated polysaccharides from red microalgae Porphyridium showed that the polysaccharide inhibited the movement of polymorphonuclear leukocytes, producing an anti-inflammatory effect, while in vivo studies showed that the topical application of the polysaccharides in humans inhibited the development of erythema [24]. Furthermore, immunostimulatory activity has been observed from in vitro assays involving microalgal material such as Spirulina platensis extracts, revealing an increase in human dermal fibroblast cell proliferation and enhanced wound area closure rates [25].

Antioxidants can be defined as “natural or synthetic substances that may prevent or delay oxidative cell damage caused by physiological oxidants having distinctly positive reduction potentials, covering ROS/reactive nitrogen species (RNS) and free radicals” [26]. This is one of the most common causes of oxidative damage due to UV exposure [27]. Lipids, nucleic acids, and proteins are ROS, RNS, and reactive sulfur species (RSS) targets [28]. UV-A damages DNA indirectly by generating ROS-like radical singlet oxygen (1O2) and/or hydrogen peroxide among others, causing DNA mutations during the replication process such as the guanine–thiamine (G–T) transversion, while UV-B directly damages DNA strands, generating cyclobutane pyrimidine dimers (CPDs) by covalently bonding two neighboring pyrimidines; their accumulation over time can produce an interruption of DNA replication and transcription, disturbing the function of the damaged cell [27][29]. Over the last two decades, studies have been conducted to find and obtain antioxidants from natural sources in order to replace synthetic sources to treat oxidative damage. Thus, various studies have focused on the protective effect of enzymatic extracts from microalgae against DNA damage induced by oxidative stress [30][31][32][33].
Antioxidants produced by microalgae are substances with high nutritional value, considering that these microorganisms have a greater ability to produce them compared to those obtained from plant-derived sources [34]. They can produce multiple components for a single species, and even if their production yield is lower than those obtained synthetically, nowadays, the generation of bioactive molecules from microalgae is expected to surpass synthetic sources, given that their production is renewable and sustainable [35]. Some of the antioxidants that can be obtained from microalgae are chlorophyll, vitamins, flavonoids, polyphenols, sterols, and carotenoids [4][28]. Carotenoids, β-carotene, chlorophyll a, chlorophyll b, and xanthophylls were the main photosynthetic pigments identified in green microalgae such as Spirogyra neglecta and Microspora indica [36]. Fucoxanthin, a bioactive microalgal compound, can be found in several species of diatoms (golden-brown microalgae) and has remarkable antioxidant, anti-obesity, anti-diabetic, anti-cancer, anti-inflammatory, anti-hypertensive, and anti-osteoporotic properties. Fucoxanthin is an important carotenoid for human health that is marketed at USD 30,000 per gram and is considered a valued nutraceutical product or functional food to prevent or help treat different diseases [37][38][39]. Recent research on the use of diatoms rich in carotenoids has been extended to space missions where resources are limited and the need to implement CO2 recycling systems provides an opportunity to produce O2 and food based on microalgal biomass as an alternative to health supplementation for humans in these conditions [34][40][41]. Additionally, in vitro experiments on human fibroblasts have reported that even small doses of infrared radiation can produce free radicals, affect collagen and elastin expression, and upregulate metalloproteinases (MMPs), representing an area of opportunity for the development of alternative supplementation to obtain antioxidants [42].

As mentioned before, microalgae possess mechanisms against environmental challenges such as activation of several photo/dark repair mechanisms, antioxidant systems, UVR avoidance, DNA repair, and cell protection by producing UV photoprotective compounds such as mycosporine-like amino acids (MAAs), carotenoids, polyamines, and scytonemin [43].
Ectoine is a compatible solute that serves as a protective substance by acting as an osmolyte and thus helps organisms survive extreme osmotic stress, for example, with high salt content [44]. Ectoine from Halomonas elongate extracted with low salt concentration solution is an adsorbent of ultraviolet light [45][46]. Mycosporine-like amino acids that also absorb ultraviolet light can be extracted from dry biomass employing methanol to assist the extraction and chloroform to eliminate pigments from Scytonema cf. crispum [47].
The variation in different growth parameters has been associated with MAA composition in microalgae, due to improved production in direct correlation with sunlight exposure, or a variation in the MAAs’ accumulation according to the type of light [48]. As there are diverse molecular configurations and growth conditions of the harvested microorganisms, the spectrum of light that the photoprotectors can adsorb is also diverse. Photoprotection is defined as the decrease in UV radiation damage that can cause skin disease and the risk of skin cancer [49]. UV radiation comprises UVA (320–400 nm), UVB (290–320 nm), and UVC (200–290 nm). UVA causes indirect DNA damage via ROS production; it is also related to skin aging and pigmentation. UVB exposure enhances sunburns and DNA strand breaking; the pyrimidine dimer mutations associated with nonmelanoma skin cancer are also linked to UVB exposure. UVC, the UV radiation with higher energy, is completely absorbed by the ozone layer and does not represent a risk from its natural source [50].

5. Moisturizers, Regenerative and Other Activities

In the dermis, collagen has a dual-action mechanism providing building blocks for the formation of collagen and elastin fibers, while also binding to receptors present on fibroblasts to stimulate the production of collagen, elastin, and hyaluronan, which helps to maintain good skin appearance and elasticity and enhance its strengthening against harmful environmental factors [51]. The bioactive compounds obtained from microalgae sources have proven to possess properties like the ones presented, providing a range of applications that vary widely depending on the industrial and commercial sector of interest [52]. Expressly, bioactive compounds from microalgae are currently being incorporated into the cosmetic and cosmeceutical industry as they can improve and maintain the structure and function of the skin [2].
Exopolysaccharides from microalgae can be rheology modifiers, conditioners, moisturizing agents, healing agents, emulsifiers, and substitutes for hyaluronic acids. In addition, they can stimulate collagen synthesis and provide protective activities against enzymatic proteolysis [8][9][10][51]. Proteins found in microalgae used as food supplements can stimulate collagen synthesis, leading to a reduction in vascular imperfections and promoting tissue regeneration [2][10][53][54][55]. Additionally, some microalgae species are known to produce compounds that can act as substitutes for hyaluronic acids or protect against enzymatic proteolysis [2][8][9][10][53][54][55][56].
Furthermore, chlorophyll a and b can be used as dyeing agents and also as additive agents that can be used to mask odors in formulations [16][57]. β-carotene, phycoerythrin, phycocyanin, allophycocyanin, phycoerythrocyanin, astaxanthin, lutein, lycopene, and violaxanthin can be used as dyeing agents in the textile industry and in cosmetics as greener alternatives [2][57][58].

Some microalgae-derived molecules can serve as vehicles or excipients for other molecules of interest. Proteins from microalgae are molecules of commercial interest; they can be used in the food industry, pharmaceutical, and cosmetic sectors, or more specifically, in nutraceuticals and cosmeceuticals. They can be used as emulsifying, foaming, thickening, and gelling agents [4]; these functions are mainly explored in the food sector but could potentially be extrapolated to other sectors. C. vulgaris and Tetraselmis sp. have emulsifying and foaming properties. Thickening or gelling properties have also been reported for Arthrospira platensis, H. pluvialis and T. suecica proteins [59]. However, this application field is recent; therefore, not many studies have been conducted in this area.