+1 point
Thank you for your contribution! You can also upload a video entry related to this topic through the link below: https://encyclopedia.pub/user/video_add?id=23887
Check Note
2000/2000
Load Frequency Control Considering Renewable Energy Sources

The hybrid power system is a combination of renewable energy power plants and conventional energy power plants. This integration causes power quality issues including poor settling times and higher transient contents. The main issue of such interconnection is the frequency variations caused in the hybrid power system. Load Frequency Controller (LFC) design ensures the reliable and efficient operation of the power system. The main function of LFC is to maintain the system frequency within safe limits, hence keeping power at a specific range. An LFC should be supported with modern and intelligent control structures for providing the adequate power to the system.

Power system stability is an important area of concern in modern interconnected power systems. It is termed as the capability of a power system to become stable after the removal of disturbances. While an unstable system loses its control by falling out of synchronism, this phenomenon may have a catastrophic impact on the smooth running of the power system. Stability concerns have become an integral part of the design of a reliable system; maintaining synchronism between different parts of the power system is a crucial task for power system engineers [1]. It is necessary to generate electric power in accordance with load side demand while considering the losses as well. A stable power system operates around a specific region, different external conditions may deviate the nominal frequency of the power system to an unstable region [2].
The frequency control in modern power systems is achieved using two control loops: one is primary, and the other is secondary [3]. The first one is responsible for preventing the frequency transients provided using governor droop which can generate the steady state error [4]. The second method is known as automatic gain control or load frequency control which may regulate the system frequency at a stable level. In its early days, the load frequency control was obtained using conventional PID controllers, but further research developed intelligent controllers, fuzzy controllers, Sliding Mode Controllers and Tilt Integral Derivative controllers. A modern controller design based on sliding mode control and adaptive control pattern provides a better real-time control of the power system. Further research is being carried out in the areas of Brain Emotional Learning-Based Intelligent Controllers (BELBICs) and Support Vector Machine-based controllers to improve the performance.

There are several power system configurations in renewable energy systems, but in this research, these are classified as single-area power systems and multi-area power systems. The former is an isolated power system, while the latter is usually a tied power system. The environmental non-linearity disturbs the normal operation of the power system, the interconnection of renewable energy systems develops transients and frequency deviations [5]. The introduction of modern power generation, transmission and distribution techniques makes the power system operation complex. The power quality tackling in complex power system research and development is being carried out in the field of Load Frequency Controllers. Various control strategies and optimization algorithms have been suggested for the improvement of power quality and response of the system to the abnormalities [6]. The employment of Load Frequency Controller (LFC) in various areas along with optimization techniques is shown in Figure 1. Different algorithms are used for LFC optimization in order to improve the transient response and settling time.

A single-area power system contains only one renewable energy source which can be wind, solar, biomass, hydel or tidal. It is a simple system where power generation and utilization are easy. A wind turbine-based single-area power system is shown in Figure 2. Here, the feedback loop contains a controller which tracks the output signal and adjusts the parameters of the system to maintain output power quality.

Figure 2. Wind Turbine-Based Single-Area Power System.
LFC’s design for a single-area power system has been improved with the passage of time to lower the settling time, overshoot and undershoot in the output signal. In modern power systems consisting of a number of generation sources, the disturbance imposes on the power system variables developing errors in system operation. The development of a disturbance rejection procedure is the need of time. In [30], the Microgrid System presented by Qi et al. uses an improved linear active disturbance rejection control algorithm (ILADRC) for tuning the PID controller. The results suggested a superior performance than LADRC, Fuzzy PI and conventional PI controllers. The power system is tested under different test conditions and each scenario showed a remarkable improvement in power system operation.
In [31], worked on the tuning of PID controllers using the Mine Blast Algorithm (MBA) showing remarkable improvements in settling times and peak overshoot values. Integrating a superconducting magnetic energy storage system enhances the convergence of signals in a power system, as done in [32] by Wichan et al. Here, the bee optimization algorithm was used for system optimization providing superior performance to a conventional PID and SF-FLPID. The scaling factor fuzzy logic PID provides better control on the gains of a conventional controller.

Modern power systems are becoming flexible, and renewable energy sources such as wind and solar can be integrated with conventional power plants. The load frequency control is a complicated task in multi-area power systems because of the increased instability due to the interconnection of different generation sources. LFC design for a multi-area power system is based on the amount of frequency deviation in each area of control. The tie line power deviation is a serious issue in interconnected systems; it can generate transients and instability of the power system. An abrupt variation in load and power generated by renewable energy sources can cause huge instability in output power.
The tie line power exchange between various areas is shown in Figure 3, each of the areas consist of conventional units with distributed generation and connected with various sub-systems. The interconnection of different areas creates problems such as transients and harmonics. The power imbalances create the issue of power flow on the interconnected lines; hence, the frequency control involves power flow measurement on the interconnected lines. The frequency control characterizes the whole power system, and its control is crucial for reliable operation. To maintain the power system frequency at a fixed level, the total amount of active power generation must be equal to the active power consumption at any instant of time.

Figure 3. Power Exchange between Different Areas.
Figure 4 shows the Tie Line Interconnection of various GENCOs; here, the system is divided into various areas. Each area contains generation companies (GENCOs) and distribution companies (DISCOs), while the tie lines are used for interconnection purposes. Making such a configuration in terms of the number of areas improves the manageability of the power system. In each area, the power flows between the GENCO and DISCO, while tie lines allow the power flow in-between the areas. There is a bidirectional power flow in-between the areas, GENCOs and DISCOs. 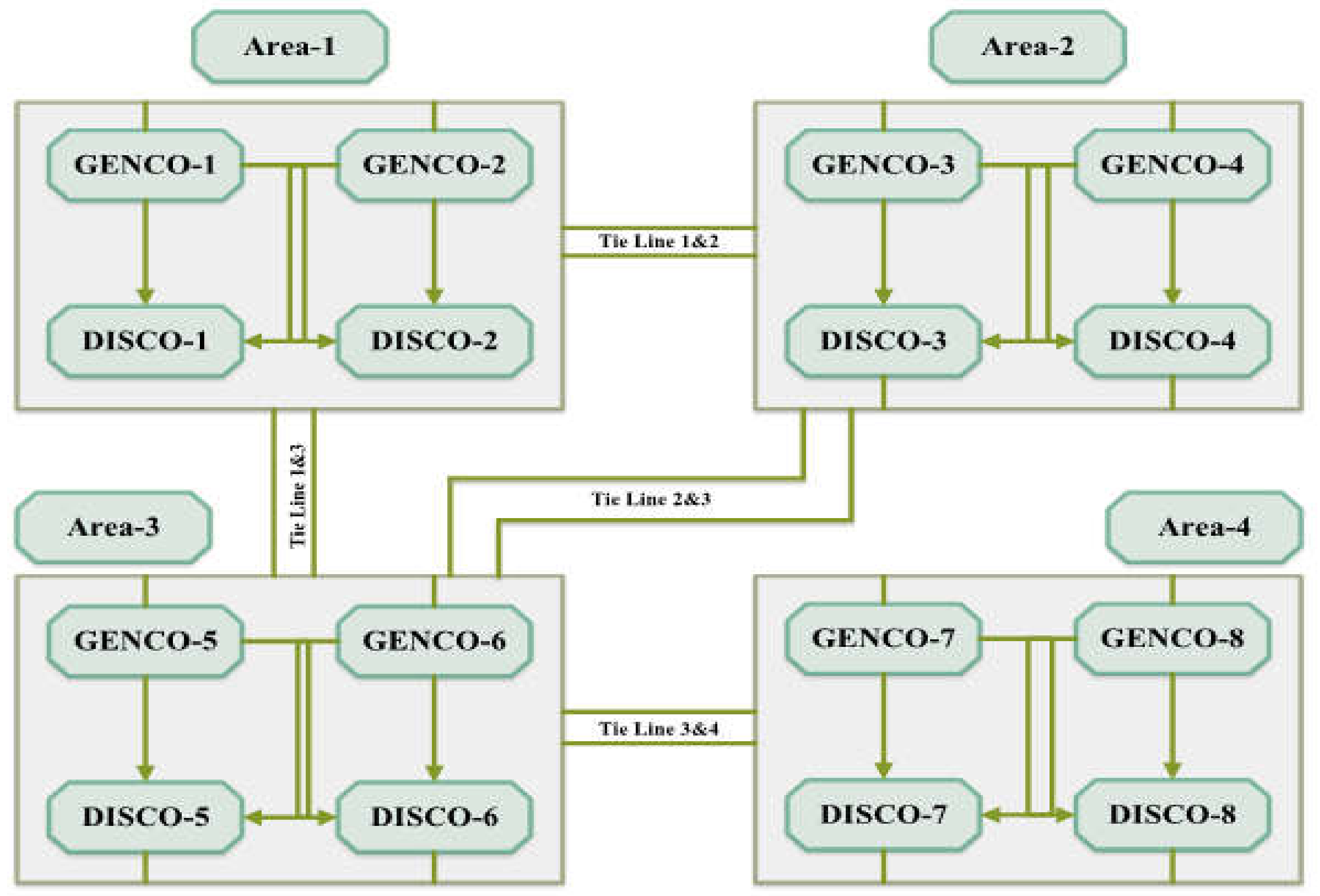 Single-stage controllers are easy to operate and inexpensive; different techniques have been developed for the optimization of settling time, overshoot and undershoot values. Further improvements in settling times and overshoot values have been achieved using cascading controllers. Although it makes the system a little bit complex, it provides results not achievable using simple controllers. In [33], worked on a two-stage FPIDN-FOI controller optimized with the Imperialist Competitive (ICA) Algorithm; the settling time, overshoots and undershoots improved a lot compared to HFA-, PS- and GWO-optimized PID. In [34], used two-stage adaptive Fuzzy PI controllers optimized with the particle swarm optimization algorithm (PSO) and grey wolf optimization algorithm (GWO). The results show a superior performance in settling time, peak overshoot and peak undershoot of a two-stage controller. In [35], Gulzar et al. worked to develop an adaptive fuzzy-based optimized proportional-integral controller to mitigate the frequency oscillation of a multi-area photovoltaic thermal system. The results of this work are exceptional as the settling time reduced significantly.
A similar approach adopted by [36] using an invasive weed optimization algorithm (IWO) achieved remarkable success in lowering the settling time value with a cascaded approach. To adjust the controller parameters, continuously retrieving the system performance adaptive control was developed [37]. The two-stage topology combined with the adaptive control system provides better control of the power system on a continuous basis.