Submitted Successfully!
Thank you for your contribution! You can also upload a video entry related to this topic through the link below:
https://encyclopedia.pub/user/video_add?id=2372
Check Note
2000/2000
Anti-Haemonchus Contortus Vaccines Development
Edit
Upload a video
This entry is adapted from 10.3390/vaccines8030555

Haemonchosis/barber’s pole disease is a socio-economically important disease caused by one of the most pathogenic nematode parasite of ruminants called Haemonchus contortus. The control practices through anthelmintics, and resistance to these drugs demands for an effective, safe and durable vaccine against H. contortus.  During host-parasite relationship, parasites excrete and secrete large number of molecules into the host, which perform adversative immune-regulatory functions upon bindings to host immune cells. Various potential vaccine antigens have been tested by different ways and strategies applied in animal models, and significant progress has been made in the development of vaccines against H. contortus.

The gastrointestinal nematode parasite Haemonchus contortus (H. contortus) is a resident of tropical and subtropical regions worldwide that imposes significant production losses, economic losses, and animal health issues in the small ruminant industry, particularly sheep and goats. Considerable efforts have been made to understand how immunity is elicited against H. contortus infection. Various potential vaccine antigens have been tested by different methods and strategies applied in animal models, and significant progress has been made in the development of vaccines against H. contortus.

The immune responses to helminth parasites within their host are quite complex and characterized into two different stages: the immune responses to infective larvae and the immune responses against adult parasites. The T-helper cell type 2 (Th2) responses are considered the most effective resistance against helminths associated with high levels of serum and mucosal immunoglobulin-A (IgA), E (IgE), G (IgG), and eosinophilia at the site of infection [1][2][3]. The resistance against H. contortus infection is mainly associated with the breed and age of the host, as well as previous exposure to parasitic infection; especially, lambs are more susceptible to parasitism during the first 6 months of their lives, as they cannot develop immunity against H. contortus. This could differentially happen in older sheep, which usually can handle a moderate infection due to acquired immunity; however, this immunological phenomenon still not well understood. Several events are required for the clearance of nematode from the immunized host, including the activation of nonspecific defense mechanisms and the recognition of somatic and excretory/secretory (ES) antigens by dendritic cells (DCs), which act as antigen-presenting cells (APCs) for T cells [4]. The effector constituents of immunity are ‘‘allergic” inflammatory responses involving mucosal mast cells and eosinophils that secrete inflammatory mediators, which suppress egg production, prevent infective larvae and adult worm establishment, paralyze worm motility, and possibly mystify incoming larvae [5][6].

Generally, in case of helminths infection, Th2 immune responses are the part of the humoral responses associated with the specific expression of cytokines at the site of infection and cytokines acting as critical mediators for any immunological response, which evolved in CD4+ T cells stimulation and differentiation [4][7]. Helminths infection elicited strong Th2 cell responses associated with significant productions of interleukin (IL)-4, IL-5, IL-9, IL-10, IL-13, IL-25, and IL-31 [8][9][10] (Figure 2). Furthermore, these responses were also associated with high levels of IgE, IgG1, IgG4, and stable eosinophil and mast cell responses [11] (Figure 2). The cytokines IL-4 and IL-13 were considered as key regulators in humoral immunity, inducing B-cell class switching to IgE and regulating major histocompatibility complex (MHC) class II production . These cytokines were involved in increased smooth-muscle-cell contractility, stimulation of epithelial cell permeability, and enhanced mucous production by goblet cells . Mast cells, eosinophils, specific antibodies, and inhibitory molecules were generally involved in immunity to H. contortus parasite [3] (Figure 2). Some previous studies have shown that Th2 immune responses associated with helminths infection were characterized by the induction of IL-4, IL-13, IgG, IgG1, and IgE antibodies in rats , and the generation of IL-3, IL-4, IL-5, and IL-13 in mice . Some studies reported that helminths have established various strategies to escape or modulate the host immune responses with advantages on both sides; for example, a modification in the Th2 response toward immunosuppression takes place as a result of the upregulation of regulatory T cells (Tregs), which suppressed protective Th2 as well as inflammatory Th1 responses in Ancylostoma caninum infection . Furthermore, helminth-mediated Th2 responses could also prevent the harmful inflammatory Th1 responses by inducing suppressive Tregs, which contributed to the formation of IL-10 and transforming growth factor-β (TGF-β) cytokines. An earlier investigation has shown that Trichinella spiralis excretory/secretory products (ESPs) suppressed in vitro DCs maturation and induced the inflation of functional Tregs induced by both S- and R-form lipopolysaccharide (LPS) . 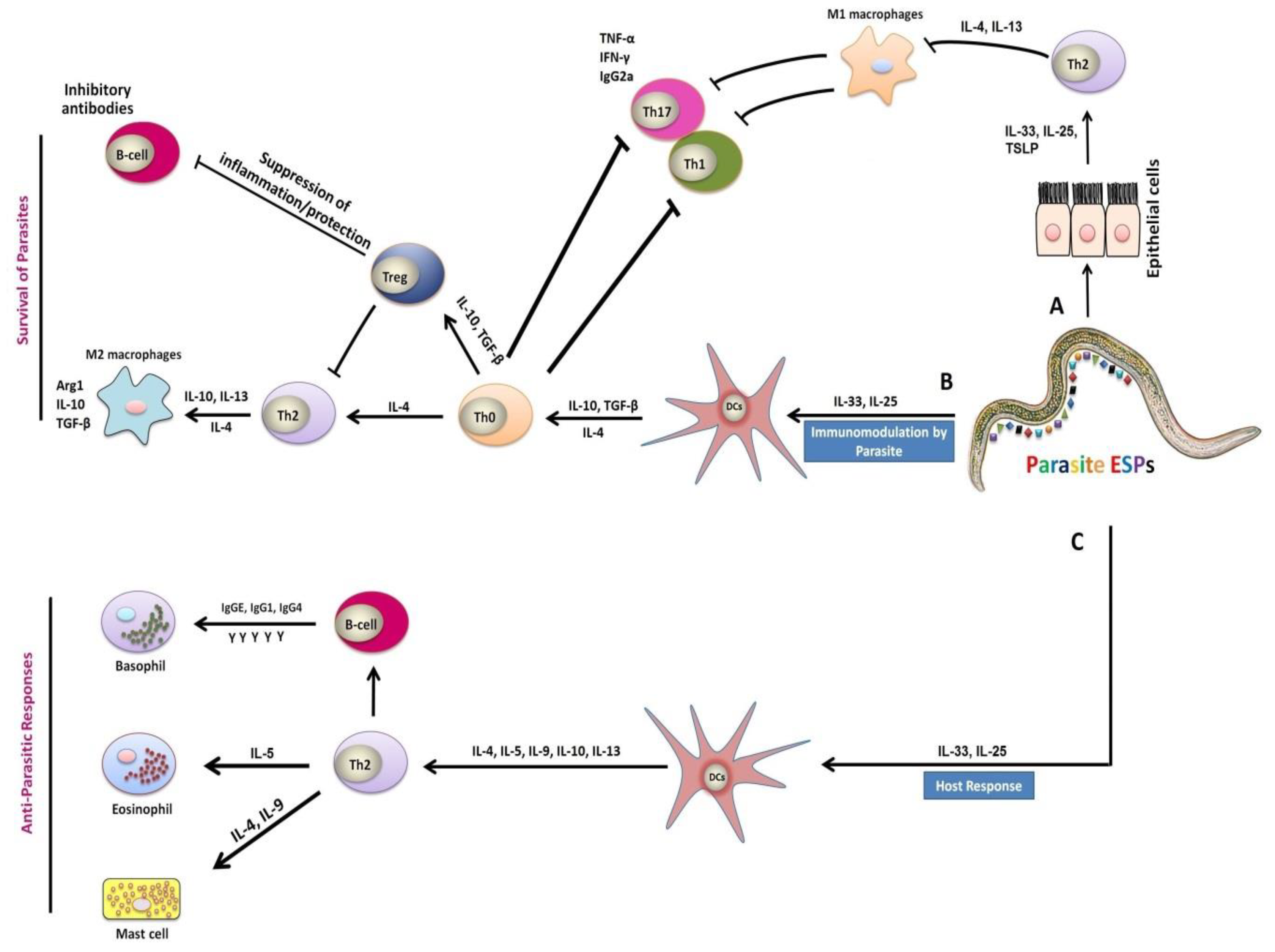 Figure 2. Mechanism of immune responses during host–parasite interactions. (A) Parasitic infection cause injuries to epithelial cells, which in turn stimulated and activated various aspects of the type 2 immune response with the generation of IL-25, IL-33 cytokines, and the Thymic Stromal Lymphopoietin (TSLP) cells. Macrophages exposure to the anti-inflammatory cytokines interleukin (IL)-4 or IL-13 lead to suppression of the classical activation of macrophages (M1) and stimulated expansion of the M2 phenotype . (B) The excretory/secretory products (ESPs) released by parasite, induced immune responses linked with production of IL-25 and IL-33 cytokines, which are capable of inhibiting the activation and maturation of dendritic cells (DCs), and inducing the expansion of functional regulatory T cells (Tregs) . Differentiation of alternatively activated macrophages (AAMs) induced by IL-4 and IL-13 can inhibit the proliferation of Th1, Th17, and Th2 cells. Thus, these cells have strong anti-inflammatory properties, manifested by the secretion of immunoregulatory cytokines IL-10 and TGF-β, as well as other related genes . (C) The parasite-induced Th2 immune responses together with release of IL-25 and IL-33 cytokines are also responsible for the activation of DCs after the recognition of antigens by receptors on the DCs of the host . These responses included IL-4, IL-5, IL-9, IL-10, and IL-13 secretions in addition to the production of immunoglobulin G (IgG) and immunoglobulin E (IgE) by B cells, and the activation of effector cells such as basophils, eosinophils, and mast cells, which caused secretions of inflammatory mediators responsible for parasite expulsion [8][9][10][11].

Since the global emergence of anthelmintics resistance, substantial progress has been made, and still, work is on the way to identify and evaluate protective efficiencies of various vaccine candidate antigens. However, none have shown robust and passable protective efficacy yet. Prospective impediments and elucidations during the developmental phase of an effective haemonchosis vaccine have been discussed. There is still the need to fully understand the immunopathology of H. contortus during parasite–host interactions for the accurate identification of better immune correlates and vaccination candidates, and most importantly, the precise choice of delivery vehicle or adjuvant for vaccination. Therefore, a deep insight into the immunopathology of H. contortus in interaction with domestic hosts (sheep, goats) is still needed to establish a road map in the development of vaccines, which will have a pivotal role in the prevention and control of H. contortus infection. Finally, the incorporation of the most advanced innovational strategies such as genomics, transcriptomics, proteomics, and metabolomics will boost up the progress of a more effective, safe, and durable vaccine against H. contortus in the near future.

More
© Text is available under the terms and conditions of the Creative Commons Attribution (CC BY) license; additional terms may apply. By using this site, you agree to the Terms and Conditions and Privacy Policy.
Upload a video for this entry
Information
Subjects: Tropical Medicine
Contributor MDPI registered users' name will be linked to their SciProfiles pages. To register with us, please refer to https://encyclopedia.pub/register :
Muhammad Ehsan
View Times: 274
Revisions: 3 times (View History)
Update Time: 28 Oct 2020
Table of Contents
1000/1000
Hot Most Recent