Submitted Successfully!
Thank you for your contribution! You can also upload a video entry related to this topic through the link below:
https://encyclopedia.pub/user/video_add?id=2371
Check Note
2000/2000
Apitherapy
Edit
Upload a video
This entry is adapted from 10.3390/foods9101362

Apitherapy is a complementary and alternative medicine approach, which involves the therapeutic use of various bee products including apilarnil (atomized drone larva) to prevent and treat various diseases.

Rock paintings from the Stone Age portray the consumption of bee products by humans [1]. The first evidence of human usage of bee products for therapeutic and cosmetic purposes dates back 6000 years in ancient Egypt and later in China, Greece, and Rome [1][2][3][4]. Current research interest is directed toward the use of bee products as potential pharmaceuticals to modify the progression of numerous diseases [5].

Bee workers of either Apis mellifera or Apis cerana species—the former is common in Europe, Asia, Africa, and America while the latter exists only in southern and southeastern Asia—produce and store multiple bioactive substances [6] Royal jelly, propolis, bee pollen, honey, bee venom, bee bread, and bee wax are common products of the bee hive. They all (to a varying degree) possess multiple health-promoting properties due to their high content of natural antioxidants (e.g., flavonoids, phenols, or terpenoids), peptides, rare lipids (such as those found in royal jelly), vitamins, minerals, trace elements, and several bioactive substances [3][6][7]. Research documents variability in the contents and effects of every single bee product, mainly due to variations in bee species, botanical origin, geographic location, season, extraction and handling procedures [3][8]. 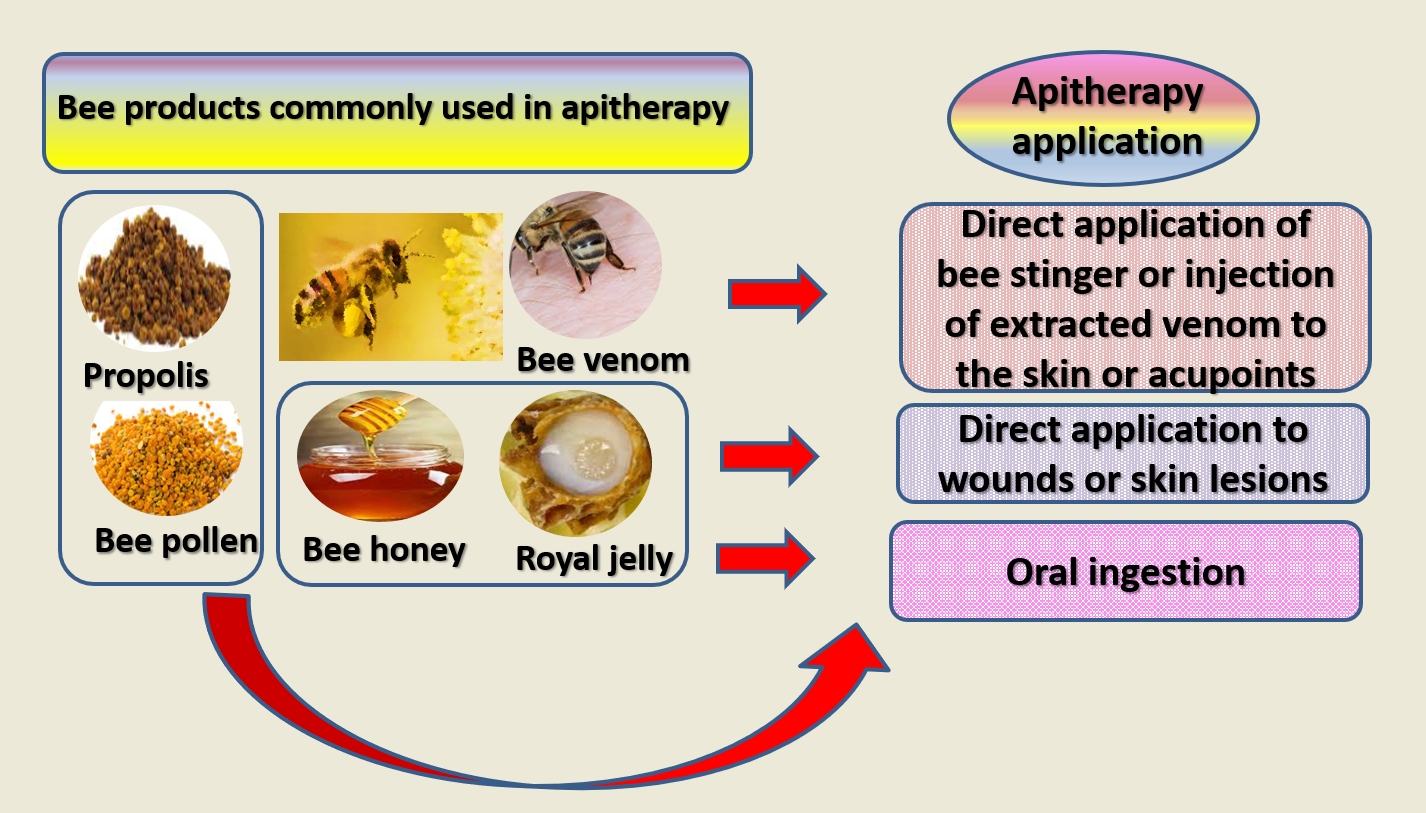 Figure 1. Bee products commonly involved in apitherapy along with common routes of admiration.

As shown in Figure 1, many bee products are used as pharmaceuticals. The most commonly used types are bee venom, royal jelly, honey, propolis, and bee pollen. All these products except for bee venom can be ingested to bring about health effects [9][10]. Meanwhile, propolis, royal jelly and honey can be used topically used to treat psoriasis [11], wounds and burns [12]. Given their health-promoting properties, these products are widely used as dietary supplements [9][13].

Bee venom is a complex neurotoxin that exists in the stinger of honey bee workers. It comprises a large number of bioactive compounds such as polypeptides and enzymes [14]. Owing to its anti-inflammatory, antifibrotic, antioxidant, anti-microbial, and neuroprotective activities, bee venom has long been used as a traditional medicine modality, especially in the far east [15][16]. Recent research signifies positive effects of bee venom in chronic and hard-to-treat disorders such as Alzheimer’s disease and rheumatoid arthritis [17][18]. Given that bee venom exists in the stinger of living bee workers, this therapy is administered either through direct application of the stinger to certain disease-related acupoints in the skin or by subcutaneously injecting these points with extracted bee venom (Figure 1). Allergy testing is usually performed before the commence of treatment because some individuals may be allergic to phospholipase A2 in bee venom. Alternatively, treatment may be conducted only by melittin, the most copious bioactive substance in bee venom [19].

Intracellular molecules involved in inflammatory and oxidative stresses increase with aging and contribute to cellular dysfunction—a condition described as inflammaging [8][20]. Both inflammatory mediators and free radicals threaten health span and lifespan by inducing age-related pathologies such as atherosclerosis, diabetes mellitus, obesity, neurodegenerative disease, to name a few [8]. Several lines of evidence describe anti-aging effects of royal jelly, bee pollen, and propolis both in humans and laboratory animals [8][21][22][23]. Here we give few examples of how bee products express anti-aging effects.

Alzheimer’s disease and Parkinson’s disease are the most common age-related neurodegenerative diseases. Research shows that both disorders develop as a result of a chronic inflammatory condition that involves neurons and glial cells [13][24]. Glial overactivity promotes the expression of pathogenic genes that underly Alzheimer’s disease and Parkinson’s disease such as APOE [25] and alpha-synuclein [26][27], respectively. These genes further inflammation and oxidative stress both in neurons and in the blood brain barrier promoting the passage of neurotoxic molecules (e.g., amyloid beta peptides and alpha-synuclein) from the system circulation to neurons [24][25][26][27]. Intraneuronal accumulation of the toxic amyloid beta peptides along with the uncontrolled release of inflammatory mediators and associated free radicals by dysfunctional glial cells potentiate the development of pours in mitochondrial membrane resulting in the release of molecules that activate cellular apoptosis [28][29]. Research denotes that the origin of inflammation in most disorders including Alzheimer’s disease and Parkinson’s disease is gut microbial alteration, which causes aberrations in the intestinal membrane allowing the passage of bacterial toxins (e.g., lipopolysaccharide) to the systemic circulation and subsequently to the brain to stimulate neuroinflammation [30][31][32][33].

Cumulative evidence shows that bee products such as royal jelly may prevent neurodegeneration in Alzheimer’s disease through the suppression of glial activation, protection of the blood brain barrier against leakage, improvement of neuronal energy supply, downregulation of inflammatory and oxidative signaling, improvement of signal transduction (e.g., acetylcholine), increasing the production of neurotrophic factors (e.g., brain-derived neurotrophic factor and nerve growth factor), increasing beta amyloid clearance from the brain and discouraging its accumulation inside neurons [24]. Likewise, royal jelly and propolis are reported to correct behavioral deficits in laboratory models of Parkinson’s disease via mechanisms close to those occurring in experimental models of Alzheimer’s disease [13].

Insulin is a multifunctional hormone that is mainly responsible for cellular glucose uptake. Its signaling pathway interacts with a variety of other signaling cascades and affects their functioning within every single cell in the body [8]. Insulin resistance and glucose intolerance increase during old age evoking conversions in muscle fibers from type-1 to type-2 inclined in muscle loss [9]. Glucose metabolism and insulin contribute to Ach synthesis by controlling the activity of choline acetyltransferase [46]. On the other hand, cerebral insulin resistance develops in old as well as obese individuals due to depletion of adiponectin—an adipose tissue-derived adipokine that regulates neurogenesis and the metabolism of lipids and glucose [47][48]. Alterations in nutrient supply to the brain are associated with increased production of free radicals and active glycation products, which accelerate inflammation in brain cell leading to neurodegeneration [24]. Several studies show that bee products express potent hypoglycemic activities. For example, positive effects of whole royal jelly and royal jelly acid (trans-10-hydroxy-2-decenoic acid, 10-HDA) on skeletal muscle are associated improved insulin signaling and translocation of glucose transporter 4 (GLUT4) to the cell surface for glucose uptake [9][36][38][39].

Fatigue is a universal experience that comprises an overwhelming feeling of exhaustion, lack of energy, weariness along with a heightened sensation of physical or mental strain, even with absence of conspicuous efforts [48]. It is widely experienced by old people [48], patients undergoing exhaustive disorders such as kidney failure and cancer (up to 96% of cancer patients) [10][49], and patients with symptomatic Corona Virus Disease 2019 (COVID-19) infection [50]. It is also highly prevalent among people who exert excessive physical efforts such as athletes, and it may impede their achievement. Untreated fatigue is associated with distress, sleep loss, depression, distorted family and work relations, and poor quality of life [48]. In this regard, research denotes anti-fatigue effects of bee products (e.g., royal jelly, propolis, bee pollen, and bee honey) both in experimental animals on eccentric exercises [9][51] and in human athletes [52] as well as in patients with cancer [49].

Bee products share common mechanisms of action. In particular, most of these products are strong free radical scavengers. This activity is attributed to their phenolic components, which donate an electron from their hydroxyl group [8]. They also activate the major signaling pathway nuclear respiratory factor 2 (NRF2), which contributes to the production of internal antioxidants, controls inflammatory signaling, and promotes autophagy. Through these activities, bee products foster proper cellular housekeeping where harmful molecules that buildup as a result of metabolism and other cellular activities (e.g., misfolded proteins) get properly removed [7][8][9][24][53]. Bee products possess a capacity to stimulate the regeneration and responsiveness of stem cells allowing a chance for cellular replacement and repair of damages [9][24]. Their potential to activate adenosine monophosphate activated protein kinase (AMPK) and mammalian target of rapamycin (mTOR) allows them to regulate cellular energy and other vital cellular processes [9][24].

Owing to their special composition, bee products are multifunctional compounds that are capable of counteracting most pathological mechanisms that contribute to ill-health and premature and/or dysfunctional aging such as inflammation, oxidative stress, gut dysbiosis, mitochondrial dysfunction. Existing experimental knowledge denotes the potential benefits of the therapeutic use of bee products for the treatment of age-related disorders (e.g., sarcopenia, insulin resistance, Alzheimer’s disease, etc.). However, there is an intense need for well-designed trials investigating the effects of apitherapy in human subjects.

More
© Text is available under the terms and conditions of the Creative Commons Attribution (CC BY) license; additional terms may apply. By using this site, you agree to the Terms and Conditions and Privacy Policy.
Upload a video for this entry
Information
Subjects: Pathology
Contributor MDPI registered users' name will be linked to their SciProfiles pages. To register with us, please refer to https://encyclopedia.pub/register :
Amira Ali
View Times: 1141
Revisions: 2 times (View History)
Update Time: 06 Oct 2020
Table of Contents
1000/1000
Hot Most Recent