+1 point
Thank you for your contribution! You can also upload a video entry related to this topic through the link below: https://encyclopedia.pub/user/video_add?id=23695
Check Note
2000/2000
“Singing” Multilayer Ceramic Capacitors and Mitigation Methods

Multilayer Ceramic Capacitors (MLCC) have a major role in modern electronic devices due to their small price and size, large range of capacitance, small ESL and ESR, and good frequency response. Unfortunately, the main dielectric material used for MLCCs, Barium Titanate, makes the capacitors vibrate due to the piezoelectric and electrostrictive effects. This vibration is transferred to the PCB, making it resonate in the audible range of 20 Hz–20 kHz, and in this way the singing capacitors phenomenon occurs. This phenomenon is usually measured with a microphone, to measure the sound pressure level, or with a Laser Doppler Vibrometer (LDV), to measure the vibration. Besides this, other methods are mentioned in the literature, for example, the optical fiber and the active excitation method. There are several solutions to attenuate or even eliminate the acoustic noise caused by MLCC. Specially designed capacitors for low acoustic levels and different layout geometries are only two options found in the literature. To prevent the singing capacitor phenomenon, different simulations can be performed, the harmonic analysis being the most popular technique.

Capacitors are passive electronic components found in various shapes and using different materials [1]. Numerous ceramic capacitors, especially multilayer ceramic capacitors (MLCC), are used on a modern printed circuit board (PCB). They have a major role in resonant circuits, power supply bypass, and filters [2]. This makes them indispensable in all modern electronic devices, including but not limited to wearable smart sensors, environmental monitoring, agriculture, and food control, to name a few. Due to their popularity, the global market of MLCCs was valued at USD 5315 million in 2017 and it is predicted to increase to USD 7833 million by 2024 [3][4].
As presented in Figure 1, MLCCs are composed of three main elements: inner electrode, outer electrode, and ceramic dielectric material, mainly made of nickel, silver, and palladium [5]. 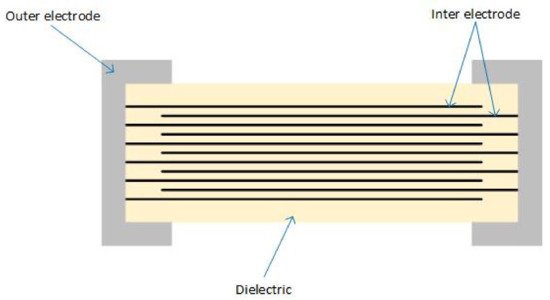 Figure 1. MLCC Structure.
The main advantages of the MLCCs are their small size and price [6]. Despite their small size, they have large capacitance and favorable electrical characteristics. These characteristics are small equivalent series inductance (ESL), small equivalent series resistance (ESR), good frequency response, a wide range of capacitance value, and their ability to be used for long periods at high temperature or in high-voltage applications [7][8][9].
All of these MLCCs advantages are due to the high-level permittivity dielectric material, Barium Titanate (BaTiO3), they are made of [10][11][12]. Ironically, the two main electro-mechanical properties of the BaTiO3 cause one of the newest problems in electronic devices: the singing capacitors phenomenon [13]. These properties are piezoelectricity and electrostriction. When an AC voltage is applied to the MLCC, the capacitor starts to vibrate due to the piezoelectricity. At the same time, the electric field generated between the inner electrodes creates electrostrictive vibration whose level is similar to the piezoelectric vibration level. Furthermore, the nonlinear phenomenon of the electrostriction also makes a second harmonic frequency vibration of the applied voltage [13]. In recent years, the thickness of the hundreds of dielectric layers present in an MLCC has decreased to achieve a large capacitance in a small package size [1]. Therefore, both properties must be taken into consideration, as the vibration generated by the piezoelectric effect is proportional to the electric field, and the vibration generated by the electrostriction is proportional to the square of the electric field [8].
Besides the piezoelectric and electrostrictive effects, the converse magnetoelectric effect also influences the MLCCs behavior. An induced electric polarization that appears under an applied magnetic field characterizes the magnetoelectric effect. On the contrary, the converse magnetoelectric effect is characterized by an induced magnetization under an external electric field [14]. When driven near resonance frequency, the converse magnetoelectric coefficient reaches the maximum [15]. The resonance frequency of the MLCC vibration is in the range of MHz, therefore people should not be able to hear anything. However, as the MLCCs are surface-mount devices (SMD), the induced vibration is transferred to the PCB via solder joint [1][16]. When an AC voltage is applied to the MLCC, the dielectric material expands in the direction of the electric field and contracts in the direction perpendicular to the electric field, causing the deformation of the board, as shown in Figure 2 [4]. Therefore, the PCB starts to vibrate with the MLCC, and the frequency can reach the audible range of 20 Hz–20 kHz [10].

2. The Acoustic Noise Caused by MLCCs

Due to the piezoelectric and electrostrictive effects of BaTiO3, the MLCCs’ inter electrodes vibrate, causing a chain reaction. The vibration is transferred from the inter electrodes to the capacitor terminals, from the terminals to the solder joint, and finally from the solder joint to the PCB, causing the singing capacitor phenomenon. Therefore, to eliminate the audible noise caused by MLCC, researchers must interrupt the vibration transfer.

The first solution would be to use capacitors with a low dielectric constant. These capacitors would solve the singing capacitor phenomenon from the root cause.

For the vibration transfer from MLCC to the solder joint, many alternatives are available. The component suppliers offer low acoustic noise capacitors, such as metal terminals or metal plate capacitors, interposer or alumina substrate MLCCs, thicker dielectric layer capacitors, and dipped radial leads capacitors. The most effective commercial solution is the metal terminal capacitor, which attenuates the noise by 25 dB. Some authors suggest increasing the cover layer thickness to reduce the transmitted vibration.

For the vibration transfer to the PCB, some authors suggested decreasing the solder joint. Unfortunately, to date, this has not been demonstrated to be efficient. Other authors suggested placing the MLCC in a vertical orientation on PCB to increase the resonating frequency. Of course, the layout geometry has a big impact on the PCB acoustic noise. The mirror or back-to-back configuration is considered the best solution in the literature.

As mentioned before, it is better to prevent than to correct. By simulating the design, researchers can avoid the apparition of the singing capacitor phenomenon. To simulate the acoustic behavior, researchers need a harmonic analysis. The simulation is more precise if researchers also implement a statistical simulation and a parameter sensitivity analysis. Some authors recommend a three-dimensional FEM simulation and a vibration analysis [17].

The two most popular methods found in the literature to measure the acoustic noise caused by MLCCs are SPL measurement and LDV measurement. These two can be correlated with a linear equation. Other methods to investigate the singing capacitor phenomenon are the optical sensor fiber, piezoelectric accelerometer, active excitation method, and vibration and rail voltage coherence method.

In conclusion, the acoustic noise caused by MLCCs is a current problem in modern electronic systems. Therefore, the interest in this issue is high among the experts who study electronics in specialized literature. Unfortunately, the solution for this phenomenon is not straightforward due to the design-oriented behavior of the MLCCs.

More
© Text is available under the terms and conditions of the Creative Commons Attribution (CC BY) license; additional terms may apply. By using this site, you agree to the Terms and Conditions and Privacy Policy.
Upload a video for this entry
Information
Subjects: Engineering, Electrical & Electronic
Contributors MDPI registered users' name will be linked to their SciProfiles pages. To register with us, please refer to https://encyclopedia.pub/register :
Corina Covaci
,
Aurel GONTEAN
View Times: 370
Revisions: 3 times (View History)
Update Date: 06 Jun 2022
Table of Contents
1000/1000
Hot Most Recent