Submitted Successfully!
Thank you for your contribution! You can also upload a video entry related to this topic through the link below:
https://encyclopedia.pub/user/video_add?id=2367
Check Note
2000/2000
Urban Rain Flood Models
Edit
Upload a video
This entry is adapted from 10.3390/w12092484

The basis of studying urban rain and flood problems is to establish urban rain and flood models, calibrate and verify the models by simulating and reproducing historical flood events, and then provide technical support for urban hydrological forecasting, urban planning, and water resource utilization. The essence is to alleviate or even solve the problem of urban flood.

The frequent occurrence of urban flood events has caused severe losses to human life and property worldwide [1]. Climate change and the urban rain island effect have exacerbated the problem via increasing occurrence of extreme rainfall events [2]. Continuous development and expansion of cities have led to the transformation of natural permeable surfaces into impervious underlay surfaces, which accelerate the formation of runoff [3]. At the same time, continuous economic development has led to more severe flood losses [4]. The increasing complexity and harmfulness of urban flood events have made urban rain and flood issues important research topics.

Scholars have developed hundreds of urban rain and flood models. Model development can be divided into three stages (Figure 1): the foundational stage (1890–1971), the development stage (1972–1990), and the modern stage (1991–today) [5]. The introduction of mathematical formulas into urban drainage design calculations in 1889 marked the beginning of the foundational stage [6]. This phase mainly used empirical equations based on physical mechanisms to meet the needs of urban runoff calculations. The establishment of the US Environmental Protection Agency in 1971 marked the beginning of the development phase of the storm water management model (SWMM) [7]. The SWMM is a semi-distributed model that integrates surface runoff, surface confluence, and pipe network confluence. Its development is an important sign of the maturity of urban hydrological models [8]. At this stage, the research is mainly focused on urban hydrological processes and hydrodynamic process simulation. With algorithmic innovation, the model is able to meet the basic needs of urban rain and flood simulation. Since 1991, or the modern stage, developments in science and technology have provided a solid foundation for rapid development of urban rain and flood models, and comprehensive integration is now a remarkable feature of current models. The simulation method is more comprehensive, and the modeling process is more convenient. New methods, technologies, and models have been gradually introduced into urban rain and flood simulation, making simulation methods more accurate and complete [9]. Many scholars have conducted detailed systematic reviews of the performance of rain and flood models over time. 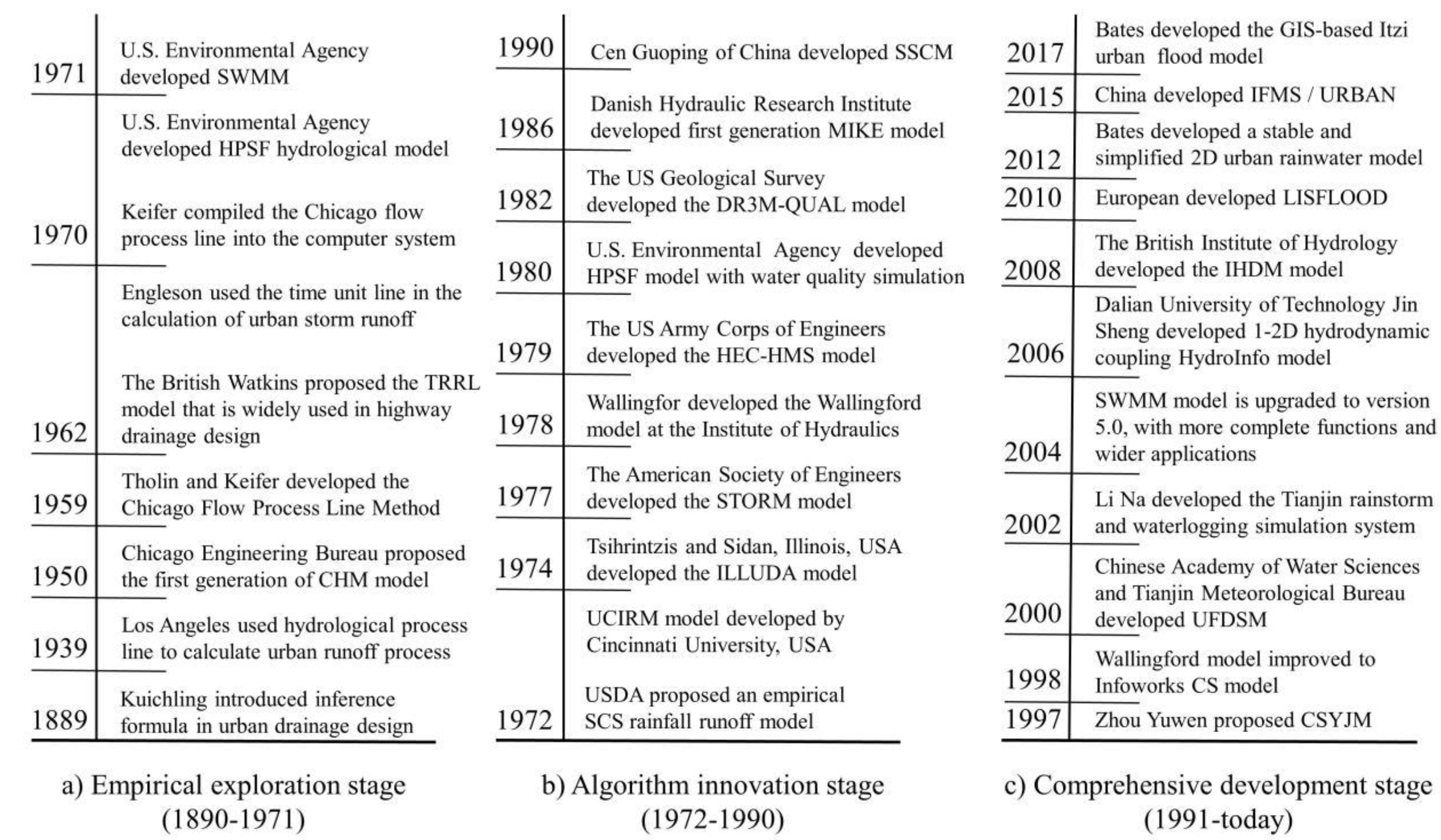 Verworn et al. [11] examined today’s basic principles of urban drainage, potential future advances, and their relevance to flood protection. Boughton et al. [12] systematically review the development and application of water balance models in Australia over a 40-year period. Winz, Ines et al. [13] traced the theoretical and practical evolution of system dynamics over a period of 50 years. From a review of the literature and selected case studies, the authors identified and discussed a number of the best practices and common pitfalls in the application of system dynamics simulation. Summarizing the calculation methods for urban rainwater discharge and examining development of urban rainwater models, Xia Jun et al. [14] compared commonly used urban rainwater models; with respect to the problems of insufficient data and investigative mechanisms in urban rainwater models, future development and improvement of the urban rainwater model are discussed. These review articles on urban rain flood models have discussed and evaluated the application effects of models in terms of structure principles, application characteristics, and development prospects, and they are all qualitative descriptions. However, there is little work on quantitative and intuitive descriptions of model application effect. In addition, there is almost no discussion about the influence of rainfall input on the effect of model application.

The accuracy of the urban rain flood model is determined by rainfall input, model structure, and model parameters [15][16]. Analysis and research have determined that uncertainty in rainfall input is the greatest source of model error. Based on a literature search of the Web of Science™ database, the present study, using a meta-analysis method, screens published research results on the urban rain flood model over the past five years, extracting model simulation accuracy data. The main analysis is divided into traditional rainfall input (rainfall station observations) and new technology rainfall input (radar rain measurement, numerical forecasting, and Web crawling). This study also systematically reviews the research and model development [17] work regarding recent urban rain flood models. Rainfall observation from rainfall stations has the advantage of high observation accuracy, but the spatiotemporal effect is poor [18]. New technology of rainfall measurement is designed to improve the spatial and temporal resolution of rainfall input to the model, but its observation accuracy is far from sufficient [19]. These limitations are the main reasons that rainfall input affects model accuracy [5]. In addition, rainfall duration, magnitude, model calibration times, and model verification times all have some impact on model accuracy.

Since the 1980s, meta-analysis has been recognized by researchers in different disciplines such as medicine, psychology, and pedagogy [20]. The research idea is to calculate the average effect of the data generated through experimental research and quasi-experimental research, so it belongs to the category of quantitative research methods. Sohn W et al. quantitatively evaluate the relationship between climate and low impact development (LID) effectiveness, which provides new ideas for rainwater management policies [21].

This study summarizes the development process behind urban rain flood models and points out the development characteristics of different stages of development, along with characteristics and model application. Further, it combines meta-analysis methods, quantitatively evaluating the impact of such factors as rainfall input type, calibration times, and verification times on model accuracy, developing quantitative analysis improvements. Finally, this study examines possible applications of emerging technologies in further development of urban rain flood models.

More
© Text is available under the terms and conditions of the Creative Commons Attribution (CC BY) license (http://creativecommons.org/licenses/by/4.0/)
Upload a video for this entry
Information
Subjects: Geography
Contributor MDPI registered users' name will be linked to their SciProfiles pages. To register with us, please refer to https://encyclopedia.pub/register :
Caihong Hu
View Times: 173
Revisions: 6 times (View History)
Update Time: 27 Oct 2020
Table of Contents
1000/1000
Hot Most Recent