+1 point
Thank you for your contribution! You can also upload a video entry related to this topic through the link below: https://encyclopedia.pub/user/video_add?id=23445
Check Note
2000/2000
Quercus suber and Cork By-Products

There is a drive within the cosmetic industry towards the development of more sustainable products, supported by consumer awareness of the environmental footprint. The cosmetic industry is rising to meet consumer demand by following practices, such as the use of by-products from agro-industrial waste. Quercus suber is a tree prevalent in the Mediterranean basin. The extraction of cork is considered sustainable, as this process does not harm the tree, and the amount of cork produced increases with the number of extractions. Beyond this, the cork industry produces by-products that are used to sustain the industry itself, such as cork powder, which is reused for generating energy. Additionally, cork and cork by-products contain bioactive compounds mainly with antioxidant activity that can be of use to the cosmetic industry, such as for antiaging, anti-acne, anti-inflammatory, and depigmenting cosmetic products.

1. Quercus suber and the Cork Industry

Quercus L. is a genus that belongs to the Fagaceae family and includes several species of trees, around 450 different species scattered throughout the world [1][2]. This genus can be divided into two subgenera: one composed of species that live in temperate regions generally in the Northern Hemisphere, named Quercus, and another group that includes trees typical from subtropical regions in Asia, mostly in the east and southeast, called Cyclobalanopsis [3].
Quercus suber, the cork oak, is a slow-growing evergreen tree that can live up to 200 years or more and is native to Mediterranean countries, such as European-like Portugal, Spain, France, Italy and North-African-like Tunisia, Algeria, and Morocco [4][5]. Q. suber has a unique bark, thick and porous and with fissures, that protects the tree cells from the aggressions of the outside environment, such as forest fires [6]. This bark, known as cork, is exploited by humans without endangering the tree vitality since it has the ability to regenerate as it is being harvested through the years [7]. Additionally, cork oak has the capacity to prevent soil erosion and desertification, to regulate the hydrological cycle, and to reduce CO2 emissions, protecting the biodiversity around it. For those reasons, this tree is part of an agroforestry system called “montado” in Portugal and “dehesa” in Spain that brings together forests, livestock, and agriculture [7][8][9][10].
Cork oak was highly used for its wood to build ships or manufacture tools, although nowadays, the primary use of this tree is the extraction of cork, the common name given to the cork oak outer bark that has outstanding properties, making it an important raw material for numerous applications [2][6]. Cork is a light material, is impermeable and compressible, is a good acoustic insulator, has low thermal conductivity, and has a high capacity to absorb energy and to resist impact and friction [7]. Thus, the main applications of cork are insulation, flooring, cork agglomerates and natural cork stoppers [11][12]. As several studies have shown, cork is also a source of bioactive compounds [3][13][14][15][16][17][18][19]. Cork extracts revealed the presence of substances with biological activity that could be incorporated in pharmaceutical and cosmetic formulations [3][17][18][19][20][21][22][23][24][25][26][27]. Nowadays, the cork industry is important in the economy of countries, such as Portugal and Spain. Portugal detains about 55% of the world production of cork [12]. The whole process begins with the first cork harvest. When the tree reaches between 25 and 30 years, the process of extraction of cork starts [2][6][7][12]. The first harvested cork is called “virgin cork”, has poor quality, and cracks easily; thus, it is not used in most applications [6][28]. Then it takes 9 to 12 years to extract subsequent layers of cork from the same tree; thus, the bark obtains the adequate thickness [6][28]. The second extracted cork is called “first reproduction cork” and has better quality; however, it is used essentially to produce cork agglomerates [6][28]. Only in the third extraction, the “second reproduction cork”, cork is used for its major purposes, such as to produce cork wine stoppers [6][12][28]. To avoid any damage to the tree, cork stripping is only done manually when the tree has perfect physiological conditions to remove the cork, being a seasonal activity in the transition from spring to summer [7]. On the other hand, as can be seen, this process is fully sustainable since the tree remains intact, and throughout each extraction it produces more and more cork [9].
Subsequently, the cork industry produces a lot of waste to manufacture the final products. However, this industry is sustainably developed since, for example, the cork powder is used as a fuel in generators to produce heat and energy in the factories that process cork [7][9][15][29]. Cork waste is often reused, and it is increasingly valued both for the production of new materials and for incorporation in pharmaceutical and cosmetic products since its chemical composition is being highly studied, revealing interest in certain bioactive compounds that it presents [9][15]. Therefore, this industry presents high ecological, economic, and social value; thus, cork oak forests and cork waste need to be correctly managed to continue to be sustainable [7].

One of the main problems inherent in the cork industry is related to the amount of waste that is generated by the processes of cork production and transformation, reaching values close to 50,000 tons per year [20]. Therefore, it is important to overcome this situation to reduce waste through its valorisation on many industrial applications. Figure 1 show the main by-products of the cork industry. 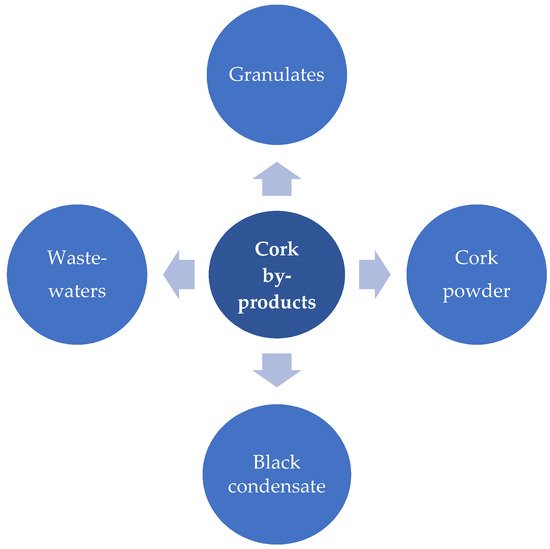 Figure 1. Main cork by-products.
In the production of cork disks and stoppers, some of these remnants are appropriate to obtain agglomerates through the application of high pressure and temperature in autoclaves [14]. Agglomerates, as the final product, keep some characteristics from the natural cork, such as elevated resistance and low thermal, acoustic and vibrational conductivity [30]. As expanded agglomerates result from exposure to superheated steam without using synthetic adhesives, this material is considered an environmentally sustainable by-product [9][30].
Accompanying industrial transformation processes, cork powder emerges from the granulometric separation once these particles are not viable to produce agglomerates [15]. This by-product is considered the main waste, representing about 25% of the raw materials that gather particles with dimensions lower than 0.25 mm [31]. Cork powder has a high heating value which is commonly used as a combustion on boilers for energy production [14][32]. Furthermore, cork powder can also be used as a filling agent to improve the quality of cork stoppers, incorporated in agglomerates and briquettes, on linoleum production, in agriculture, in the fabrication of explosives, and as a source of relevant chemicals [20][32][33]. Recent studies point to the pertinent ability of cork waste to prepare biomass materials [34]. Activated carbon can be prepared from the chemical or physical activation of cork where its adsorption properties are improved [35]. This transformation has proven to be effective to control the atmospheric levels of CO2, storing carbon for long periods and reducing their release to the atmosphere [36]. In addition, cork-based activated carbon has been shown to be able to remove some pharmaceuticals from water, such as paracetamol, isoprofen, or iopamidol, and is a relatively fast adsorber of methylene blue [37][38]. This biosorbent has begun to gain some notoriety, constituting a sustainable alternative for contaminants removal, including heavy metals, such as Cu (II), Zn (II), Cr (VI), and Ni (II), due to the low costs, great efficacy, and environmental protection legislation [32][38][39].
Black condensate is another by-product that comes from the production of black agglomerate in the insulation corkboard industry. These corkboards result from the treatment of cork particles under elevated pressure and temperature conditions (250–500 °C) which originates a dark liquid that works as an adhesive and vapours that condensate in autoclave pipes, and black condensate that is removed as a pasty solid [14][40]. It is currently used to produce energy from its combustion, although its hydrophobic character can be used as a potential protective coating [40].
In one of the initial stages of cork stopper production, cork planks are boiled in water to increase its elasticity and to remove impurities, where cooking wastewaters are obtained. Usually, industries reuse these waters for several cycles resulting in a dark effluent known as cork-boiling wastewaters, with a high content of water-soluble compounds [41]. Although the composition of these waters is dependent on the type of cork and the number of boiling cycles, the main components that are present include phenolic compounds, tannins, and 2,4,6-trichloroanisol without suberin [42]. This by-product needs a previous treatment before disposal because it exceeds the legal limits of contaminants imposed for residual wastewaters [41]. Therefore, several methodologies, essentially based on chemical, physical, and even biological processes, have been tested over the years to decrease the level of contaminants [41]. For cork industry applications, gamma radiation treatment values this effluent by increasing the antioxidant potential of phenolic compounds whose recovery can be beneficial to other industries [42].