Submitted Successfully!
Thank you for your contribution! You can also upload a video entry related to this topic through the link below:
https://encyclopedia.pub/user/video_add?id=2328
Check Note
2000/2000
Fault-Tolerant Control
Edit
Upload a video
This entry is adapted from 10.3390/electronics9091513

Fault-tolerant controllers (FTCs) can be defined as controllers that are able to tolerate faults and keep the control performance in the ideal range in the presence of faults. FTC approaches can be categorized into two main categories: Passive FTCs and Active FTC.

Passive FTCs are not dependent on fault detection and isolation (FDI) modules and can keep the desired controller performance without considering the type and size of fault.

Active FTCs are equipped with the FDI module and behave differently to different kinds of fault.

In the classic control theory, it is assumed that all the components work properly and precisely. However, experience has taught us that this assumption cannot be guaranteed all the time, and on many occasions, system components might face some faults or failures in their task. These accumulative faults would endanger the controller stability and its performance that cannot be tackled by robust control theories. With the increasing demand for having a reliable and safe controller, the fault-tolerant control (FTC) systems became one of the most attractive topics in the field of advanced control theory, which received a great deal of attention among researchers. The ongoing achievements in this field of control lead to several valuable review articles to overview the most recent techniques.

One of the earliest review papers in the field of FTC was published in 1991 by Stengel [1], which investigated the basic concepts of FTC and artificial intelligence application in FTC systems. In 1997, Patton presented a comprehensive review of FTC techniques and analyzed the key issues of FTC design [2]. Luze and Richter presented an introductory tutorial for FTC design based on reconfiguration and reviewed the state-of-the-art achievement in the field [3]. Alwi et al. reviewed different kinds of possible faults and failures in the control system and briefly overviewed fault detection and isolation (FDI) and FTC approaches [4]. The survey papers in [5][6][7][8] have reviewed the development of active and passive FTC systems and investigated the challenges and advantages of them. In [9], FDI and FTC approaches in the aerospace system have been briefly reviewed, and the combination of active and passive FTC was investigated. Some survey papers reviewed designing of FTC for a specific application, for instance, FDI and FTC approaches for attitude control in spacecraft [10], single-rotor aircraft (e.g., helicopters) [11], electric speed drive systems [12][13], photovoltaic (PV) systems [14], and power electronics systems [15][16]. In [17][18], FDI approaches have been extensively investigated, and they classified FDI techniques to four subcategories: model-based, signal-based, knowledge-based, and hybrid/active approaches.

Despite the valuable efforts in recent decades to provide a comprehensive FTC and FDI approaches, most of the works were only reviewed hardware-redundancy-based FTC approaches. At the same time, analytical redundancy, which has received a great deal of attention in recent years, has not been investigated to the best of our knowledge. In addition, most of the works reviewed FDI and FTC separately, and the link between active FTC and FDI to obtain a united active FTC system was not technically investigated. Furthermore, the ongoing achievements in this field of control and the increasing need to develop a reliable control system are another reason to review the latest works in the field. These reasons motivated us to prepare the current work.

FTC techniques can be divided into two main categories: active and passive [5][19]. Active FTC uses detection techniques to find the fault, then, a supervisory system will decide how to modify the control structure and parameters to compensate for the effect of the faults in the system [7]. However, in passive FTC, a robust compensator is used to reduce the fault effects in the system or at least stabilize the system in the presence of a fault in the system.

Passive FTC systems do not rely on the fault information, and their design is directly integrated with the concept of redundancy. The concept of hardware redundancy in passive FTC systems can be defined as the application of identical components with the same input signal so that the duplicated output signal can be compared with the main component to switch between redundant actuators in case of performance degradation to mitigate the fault effect [17]. As can be seen in Figure 1, in passive FTC design, redundancy can be considered in the controller, actuators, plant components, and sensors that the FTC system can switch to them in the presence of a fault in the system.

Figure 1. Passive FTC Structure: This kind of controller can be designed by considering redundant controller/actuator/plant/sensor and in the presence of fault will switch to the redundant component.

Several approaches have been used in designing passive FTC varies from sliding mode control (SMC) approach [20][21][22] to H∞ [23][24][25], Linear Quadratic control [26], fuzzy logic control [27][28], Lyapunov-based control [29], and control allocation [30][31][32]. Such control strategies are commonly less complicated and are popular due to their simplicity in design and application, less lag between fault occurrence and accommodation, and their low computation load [7][8][9].

The main challenges of passive FTC can be summarized as

(1) The extreme dependency on hardware redundancy: despite the advantage of having redundant hardware in improving the reliability of the system, having redundant hardware increases the product cost, and also increases the needed space (product size) and the weight of the product. It is obvious that the key components need redundancy to avoid breakdown, but applying redundancy for the whole system would be costly and difficult to be applied considering the weight and space limits.

(2) Passive FTC strategies rely on the assumption that the system will maintain its asymptotic stability of the closed-loop under specified fault/failure scenarios. However, this assumption may not be sufficient to prevent the system break down in the presence of a large number and unforeseen faults.

(3) Due to the fact that in passive FTC design, the normal and fault/failure conditions should be considered simultaneously, in the performance aspect, they are more conservative compared to active FTC design. In other words, passive FTC systems focus on the robustness of the system considering all the scenarios rather than the optimal performance for each scenario, i.e., to guarantee the stability of the system in the presence of a fault, the settling time of the controller would be increased even in a normal situation. 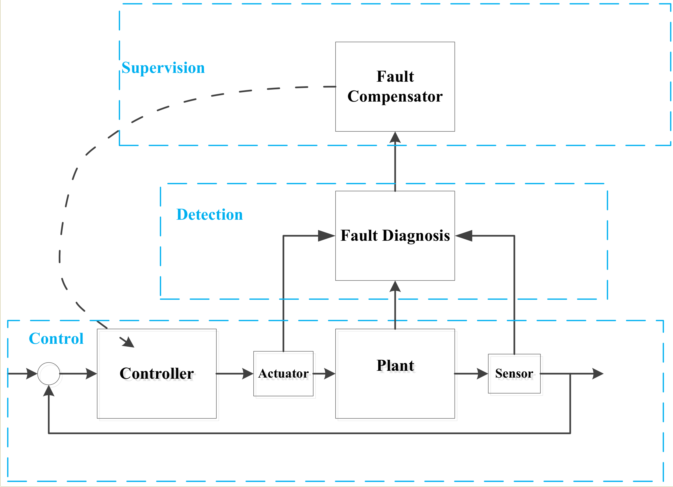 Generally, in designing an efficient active FTC system, three major factors should be considered: First, the detection unit should be accurate. False fault alarm and inaccurate fault measurement have a direct impact on the performance of the active FTC system. This inaccuracy will lead to a negative reaction to the fault and would even endanger the system stability. Second, the designed active FTC should be robust against the imperfect fault detection information. Third, the time spent for fault recovery should be less than the available time for recovery. In other words, control reconfiguration/fault compensation should be fast enough to guarantee system stability and performance.

In fact, the most important part of an active FTC system is its FDI unit; thus, we categorized active FTC systems based on the FDI approach used in their design. In the following section, we reviewed different approaches for FDI design.

Active FTC approaches are mainly categorized based on the FDI unit used in their design. However, the strategy used for the compensation of fault might be different. Here, a brief review of different fault compensation approaches used in active FTC design is presented.

More
© Text is available under the terms and conditions of the Creative Commons Attribution (CC BY) license; additional terms may apply. By using this site, you agree to the Terms and Conditions and Privacy Policy.
Upload a video for this entry
Information
Subjects: Automation & Control Systems
Contributor MDPI registered users' name will be linked to their SciProfiles pages. To register with us, please refer to https://encyclopedia.pub/register :
Alireza Abbbaspour
View Times: 1224
Revisions: 5 times (View History)
Update Time: 27 Oct 2020
Table of Contents
1000/1000
Hot Most Recent