+1 point
Thank you for your contribution! You can also upload a video entry related to this topic through the link below: https://encyclopedia.pub/user/video_add?id=23119
Check Note
2000/2000
Echinacea purpurea (L.) Moench

Echinacea purpurea (L.) Moench (EP)is a perennial herbaceous flowering plant, commonly known as purple coneflower and it belongs to the Asteraceae family. The Echinacea genus is originally from North America, in the United States, and its species are widely distributed throughout. There are nine different species of Echinacea, but only three of them are used as medicinal plants with wide therapeutic uses: Echinacea purpurea (L.) Moench, Echinacea pallida (Nutt.) Nutt. and Echinacea angustifolia DC. Several significant groups of bioactive compounds with pharmacological activities have been isolated from Echinacea species. Numerous beneficial effects have been demonstrated about these compounds.

Nature has always been a great source of therapeutic substances, providing us with various medicinal plants that produce valuable phytochemicals.
Medicinal plant use dates back to remote times and it is therefore believed to be the genesis of modern medicine. In addition, chemicals generated from plants are and will continue to be a valuable source of molecules for pharmaceuticals [1]. In the past, folk observations and experience were the guiding principles in the use of herbs, but today their active ingredients, their action mechanisms and their usage based on principles of evidence-based medicine have been discovered.
Phytotherapy is widely utilized in the treatment and prevention of a variety of medical conditions and is well-known among the general populace [2].
Plant-based pharmaceuticals now represent about 30% of the drugs market made up of necessary medications, while the remaining 11% is made up of non-essential drugs [3][4].
This evaluation's primary goal is the synthesis of the data from the specialized literature regarding the bioactive compounds, chemical composition, pharmacological and biological properties of Echinacea purpurea (L.) Moench to highlight the possibilities and perspectives for future studies, and to obtain safe and pharmacologically effective products.
The species of the genus Echinacea occupy an important place among medicinal plants, are native to North America and belong to the Asteraceae family. Echinacea comes in nine distinct species, but just three are utilized as medicinal herbs with wide therapeutic uses: Echinacea purpurea (L.) Moench, Echinacea pallida (Nutt.) Nutt. and Echinacea angustifolia DC [5][6].
A large number of species in the Asteraceae family have been utilized for therapeutic purposes in comparison to other plant families because of the availability of chemicals with a broad spectrum of therapeutic properties, as well as the fact that the Asteraceae family of plants is one of the most prominent and well-known [7][8].
Figure 1 shows the evolution over time of publications on the genus Echinacea and the species Echinacea purpurea (L.) Moench. There has been an increase in scientific research on these species over time until 2009, after which there was a slight decrease until 2015, followed by an increase again until today [9][10].

Figure 1. Evolution of the number of articles and reviews about Echinacea sp. and Echinacea purpurea (L.) Moench [9][10].
Echinacea purpurea (L.) Moench is a perennial plant, 100–150 cm tall, vigorous and herbaceous. The roots and rhizome are highly developed. Echinacea purpurea (L.) Moench is a perennial plant, vigorous, 100–150 cm tall and herbaceous. The roots are cylindrical, brownish-gray on the exterior and white on the interior. The aerial stem is branching and has rough hairs and reddish-brown patches, giving it the appearance of a bush. Linear-lanceolate leaves with three arching ribs and rough hairs are entire, 3–6 cm wide. It produces a rosette of leaves during the first year of cultivation and blooms only in the second year [11][12][13].

Several significant groups of bioactive compounds, with pharmacological activities, have been isolated from Echinacea species. The most important components of Echinacea purpurea (L.) Moench are alkylamides, polysaccharides, glycoproteins, flavonoids and phenolic compounds, which include [14] derivates of caffeic acid, like caffeic acid, chicoric acid, caftaric acid, chlorogenic acid and echinacoside, Figure 2, [15][16], whose amounts vary based on the plant's sections. In addition to these components, the researchers also identified thatphylloxanthobilins, β-phellandrene, acetaldehyde, dimethyl sulfide, camphene, hexanal, α-pinene and limonene are present in all plant tissues, regardless of species. Fatty acids, aldehydes and terpenoidsare constituents whose presence depend on the parts of plants used [17][18][19][20][21][22][23][24][25][26][27][28][29][30]. 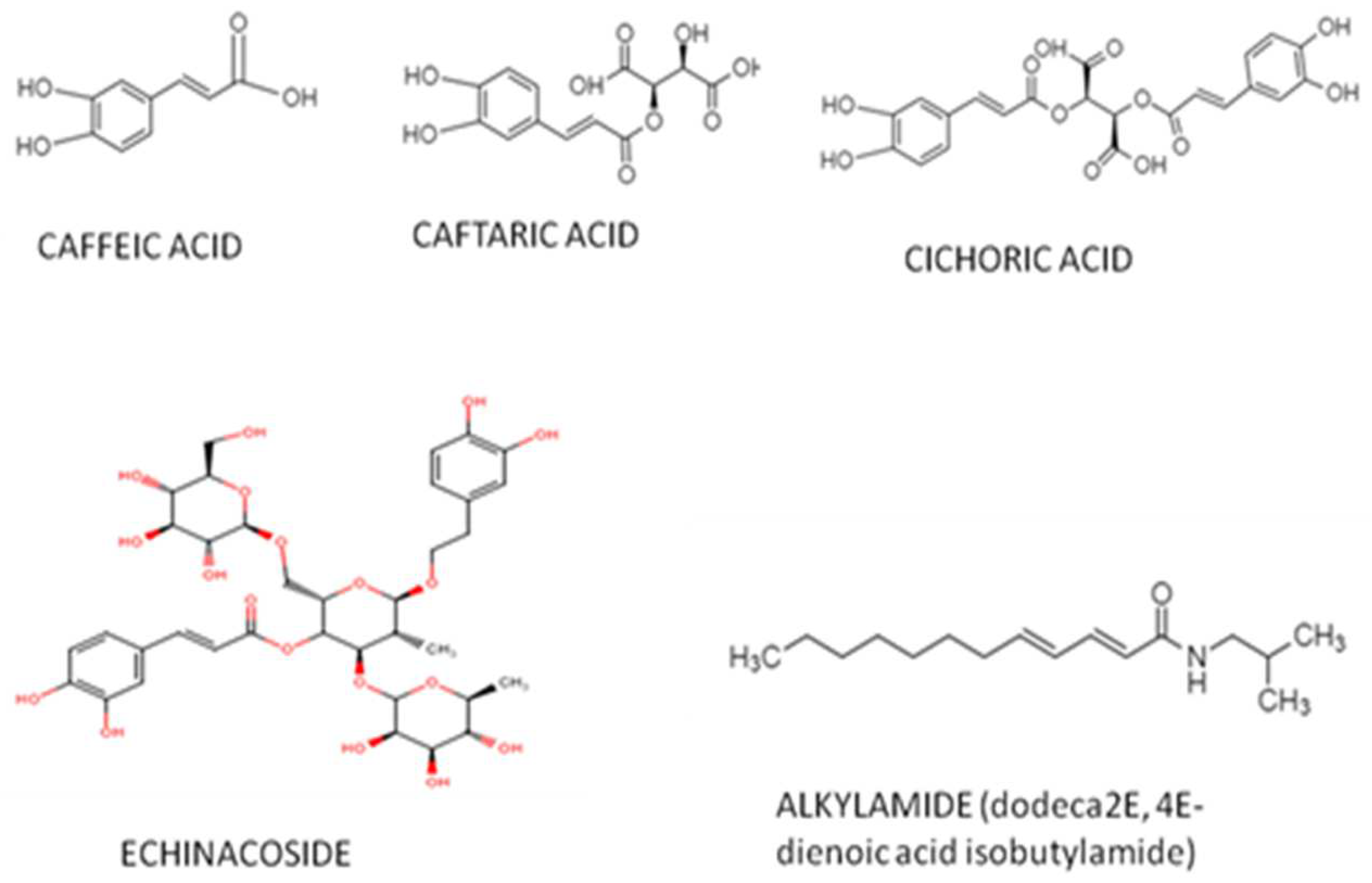 Currently, the number of herbs that are subject to scientific studies is increasing. The well-known medicinal plants are intensively studied to obtain the most accurate data about the chemical composition, the pharmacological effects and the safety of use in therapy [65].
Table 2 summarizes the most important components identified in Echinacea purpurea (L.) Moench and the scientifically proven biological and pharmacological effects, according to the literature. It can be seen that most of the demonstrated effects are common to several compounds, such as the immunomodulatory, antioxidant or antimicrobial effects.
Table 2. Biological and pharmacological effects of the bioactive compounds of Echinacea purpurea (L.) Moench.
Following the study of the literature, the researchers identified a large number of scientifically proven therapeutic properties for Echinacea purpurea (L.) Moench (Figure 3). 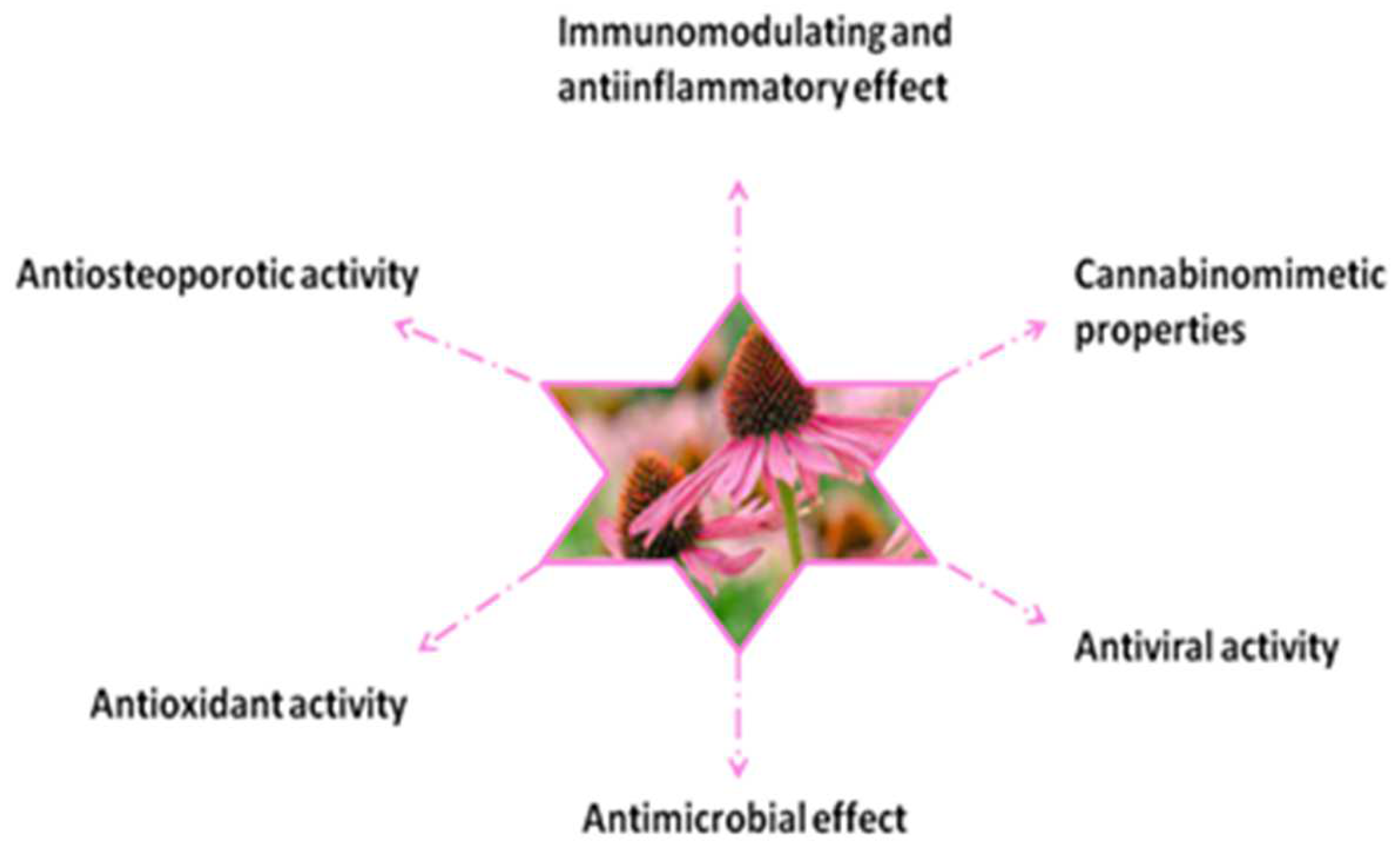