+1 point
Thank you for your contribution! You can also upload a video entry related to this topic through the link below: https://encyclopedia.pub/user/video_add?id=23074
Check Note
2000/2000
miR-20 in Central Nervous System

microRNAs (miRNAs) are endogenous, non-coding RNA molecules that have recently been discovered as fundamental and post-transcriptional regulators of gene expression. miR-20 participate in the regulation of various physiological and pathological processes.

Acute injuries of the CNS, such as spinal cord injury (SCI), traumatic brain injury (TBI), and stroke, make up a significant portion of all injuries worldwide. In the USA alone, 13.5 million people are affected [1]. Historical advances in symptom management have reduced the mortality rate. However, there is still no effective treatment to counteract the long-term functional deficits following injuries. At the same time, neurodegenerative disorders such as Alzheimer’s disease (AD) and Parkinson’s disease (PD) affect millions worldwide, and prevalence is expected to increase as the population ages. In 2010, it was estimated that there were 35.6 million people living with dementia across the globe; these numbers are expected to double every 20 years until 2050 [2]. As with traumatic injuries, there is no effective treatment for neurodegenerative diseases. To increase understanding of these disorders, extensive research in biochemistry, genetics, epigenetics, and classical neurobiology is required.
miRNAs, short non-coding ∼22 ncRNAs that modulate protein expression levels by antagonizing mRNA, are highly expressed in the mammalian CNS. They play crucial roles in virtually every aspect of CNS function, including neurogenesis, neural development, and cellular response to pathological conditions such as inflammation, apoptosis, cell proliferation, and differentiation. Recent studies have shown that miRNAs are dysregulated following a variety of CNS injuries, which has attracted them considerable attention as potential therapeutic targets [1][3][4][5][6]. The ability of miRNAs to regulate cell state and function through the post-transcriptional silencing of hundreds of genes was acknowledged as an important player in the pathophysiology of CNS disorders. MicroRNAs are released as circulating molecules into body fluids such as CSF, blood, and urine. Therefore, they may serve as valuable biomarkers for detecting early onset neurodegenerative disorders. MicroRNAs have the potential to be therapeutic molecules. MicroRNA inhibitors and mimics can be used to target pathologically upregulated and down-regulated miRNAs [7].

The role of miR-20a in SCI was implicated following observation that its expression was up-regulated for at least 1 week after SCI. This was confirmed by several microarray studies [8][9][10]. Overall, miR-20a has been shown to play a crucial role in the pathophysiology of SCI. Jee et al. [11] showed that the abnormal expression of miR-20a is able to induce secondary injury in adult mice subjected to a transection model of SCI (Figure 1). Mechanistically, miR20a was found to target neurogenin 1 (Ngn1), a transcription factor that is involved in neuronal differentiation and specification [12]. The inhibition of Ngn1 in the normal spinal cord significantly increased the cytotoxic effect on motor neurons, as well as on the physiological microenvironment, by increasing the expression of IL-6, caspase-3, IL-1β, TNF-α, and cyclooxygenase 2 [11]. 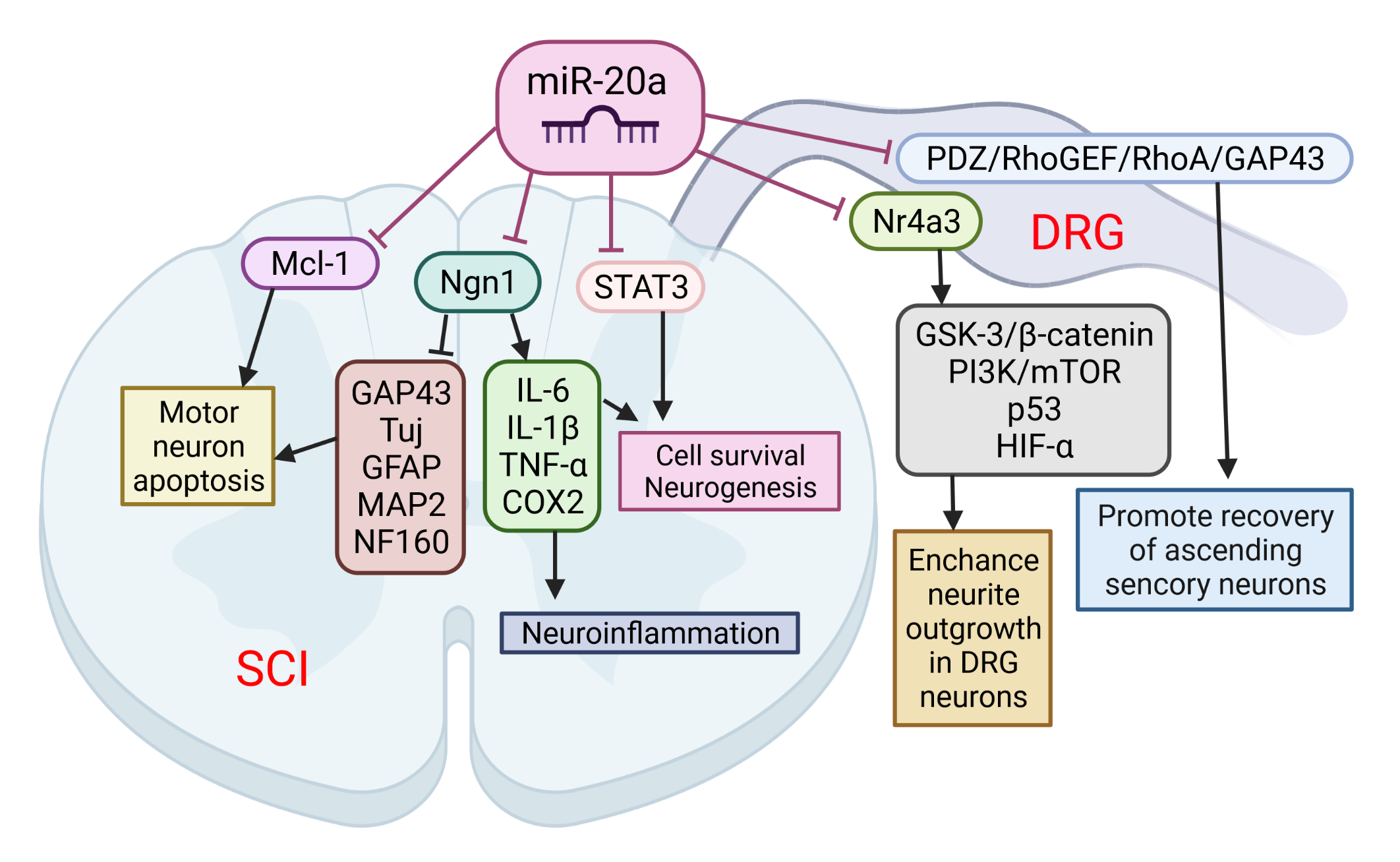 Figure 1. The role of miR-20a in spinal cord injury (SCI) and spinal cord dorsal lesions. SCI led to increased miR-20a expression and targeting of several proteins simultaneously: neurogenin 1 (Ngn1), Mcl-1, and STAT3. Suppression of these proteins has been implicated in several pathological events characteristic of the second phase of SCI: apoptosis of motor neurons, cell death, and neuroinflammation. On the other hand, miR-20a may increase neurite outgrowth in DRG neurons and promote recovery of ascending sensory neurons by interfering with Nr4a3 and PDZ–RhoGEF expression. This image was created using BioRender (accessed on 30 March 2022).

Furthermore, the inhibition of miR-20a activity in vivo using a miRNA inhibitor has been shown to effectively control motor neurons by up-regulating several neuro-specific proteins, including Tuj, microtubule-associated protein 2ab (MAP2ab), neurofilament 160 (NF160), myelin binding protein (MBP), glial fibrillary acidic protein (GFAP), and growth associated protein 43 (GAP43). It was also confirmed that the infusion of antisense miR20a resulted in the reactivation of STAT3/Jak2/ERK1/2, along with increased PI3K/Akt phosphorylation. At the same time, it led to a down-regulation of apoptotic cell death signals, such as Bax and cytochrome C. Interestingly, treatment with exogenous Ngn1 ameliorated the traumatic damage otherwise observed after traumatic SCI. This led to a significant increase in mature neuronal markers, such as TuJ, NF160, MAP2ab, and MBP-positive myelin, while the expression of inflammation inducing factors remained unchanged. These findings validate the functional relevance of the interaction between miR-20a and Ngn-1, but miR-20a has also been shown to target STAT3 (a key mediator in the SCI response) [87], suggesting that miR-20a can affect the response to SCI via multiple pathways. The authors suggest that the inhibition of miR-20a in traumatic SCI significantly reduces apoptosis and functional deficits through the up-regulated expression of the major target gene, Ngn1. Additionally, a functional deficit in miR-20a-inhibited or Ngn1-infused SCI animals was significantly ameliorated, as was tissue damage, and hindlimb reflexes were recovered.

Among the many consequences, SCI also causes sensory dysfunctions such as paresthesia, dysesthesia, and chronic neuropathic pain. Sensory neurons in the L4-L6 dorsal root ganglia (DRGs) extend axons to form the sciatic nerve along with motor axons. DRG neurons are one of the exceptional mature neurons whose axons can regenerate after injury. Two groups sought to elucidate the role of miR-20a in the axonal outgrowth of primary sensory neurons, and spinal cord dorsal column lesion (SDLC). Wang et al. [13] suggested that the effect of miR-20a on axonal regeneration is realized via the PDZ–RhoGEF/RhoA/GAP43 axis (Figure 3). The transfection of miR-20a lowered the expression of the key downstream protein, GTP-RhoA, and facilitated the DRG neuron axon regeneration in an inhibitory environment imitated by Nogo-A-Fc. The axon length in miR-20a and Nogo-A-Fc group was similar to that in the control group, and longer than that in Nogo-A-Fc group in vitro. In vivo regulation of miR-20a altered miR-20a–PDZ–RhoGEF/RhoA/GAP43 axis expression, and promoted the recovery of ascending sensory function post-SDCL [13]. According to the findings of Zhao et al. [14], another mechanism for realizing the beneficial effect of miR-20a on the axon regeneration of DRG neurons is the targeting of the Nr4a3 protein. The over-expression of miR-20a enhanced neurite outgrowth in DRG neurons in vitro, and axonal regeneration after injury in vivo. In addition, Nr4a3 suppression mimicked the up-regulating effect of miR-20a on axonal regeneration in DRG neurons [14].

A study has revealed the essential role of miR-20a-3p in the pathophysiology of stroke, and highlighted its therapeutic potential (Figure 2). Branyan et al. [15] used well-known age and sex differences in stroke outcomes to identify miRNA with neuroprotective potential. A comprehensive miRNA screening showed that miR-20a-3p was significantly upregulated in the astrocytes of adult female rats, which typically have better stroke outcomes, while it was profoundly downregulated in the astrocytes of middle-aged females and adult and middle-aged males, groups that typically have more severe stroke outcomes. The authors demonstrated that the conditional elevation of astrocyte-specific miR-20a-3p improves survival and stroke-induced sensory motor performance, although it had no effect on infarct volume. Moreover, neuron-specific miR-20a-3p was sufficient to significantly improve infarct volume and sensory motor function. It has been suggested that astrocytes are the cells that upregulate miR-20a-3p after stroke; this miRNA is then specifically transferred to neurons or other neural cell types to provide neuroprotection. Overall, these data provide new insights on the neuroprotective role of miR-20a-3p, and characterize several key pathways by which it can improve stroke outcomes [15]. 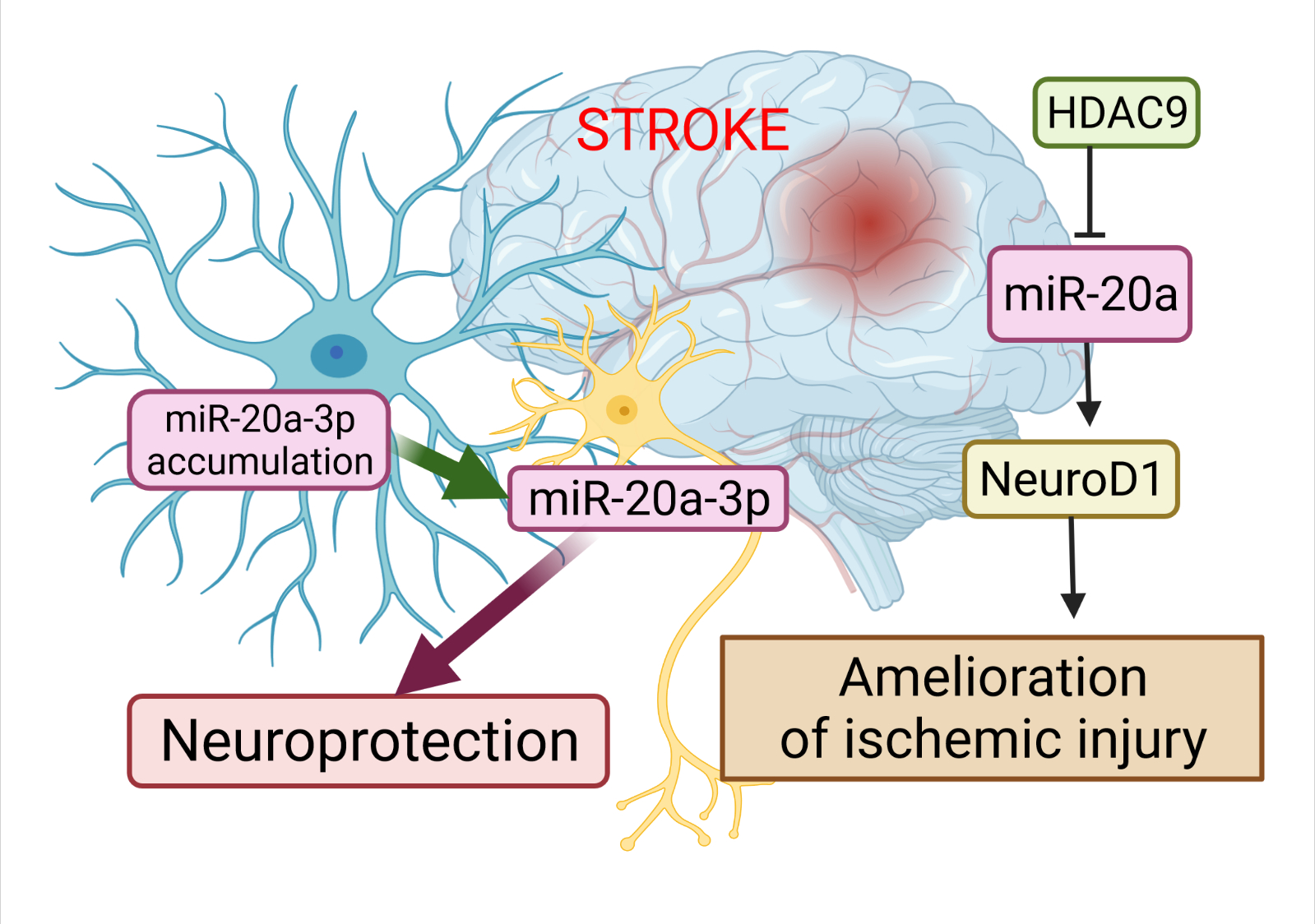 Figure 2. The role of miR-20a in the pathophysiology of stroke. The dysregulation of miR-20a after stroke has a more complex character. Astrocytes are the cells that upregulate miR-20a-3p after stroke; this miRNA is then specifically transferred to neurons or other neural cell types to provide neuroprotection. Another way to alleviate ischemic stroke is to suppress miR-20a by HDAC9 by enriching its promoter, which in turn allows activation of Neuro D1. This image was created using BioRender (accessed on 30 March 2022)

Additional evidence for the involvement of miR-20a in the development of ischemic stroke has been demonstrated by Zhong et al. [16]. Colleagues validated the relationships among histone deacetylases 9 (HDAC9), miR-20a, and its well-known target NeuroD1. HDAC9 downregulated miR-20a by enriching its promoter region, while the silencing of HDCA9 promoted miR-20a expression. miR-20a targeted NeuroD1 and down-regulated its expression. Its downregulation was accompanied by inhibited apoptosis in oxygen-glucose derivate (OGD) neurons. Therefore, the silencing of HDAC9 diminished OGD-induced neuronal apoptosis and inflammatory factor release in vitro, as well as ischemic brain injury in vivo, by regulating the miR-20a/NeuroD1 signaling. Overall, researchers revealed that HDAC9 silencing could retard ischemic brain injury through the miR-20a/NeuroD1 signaling. 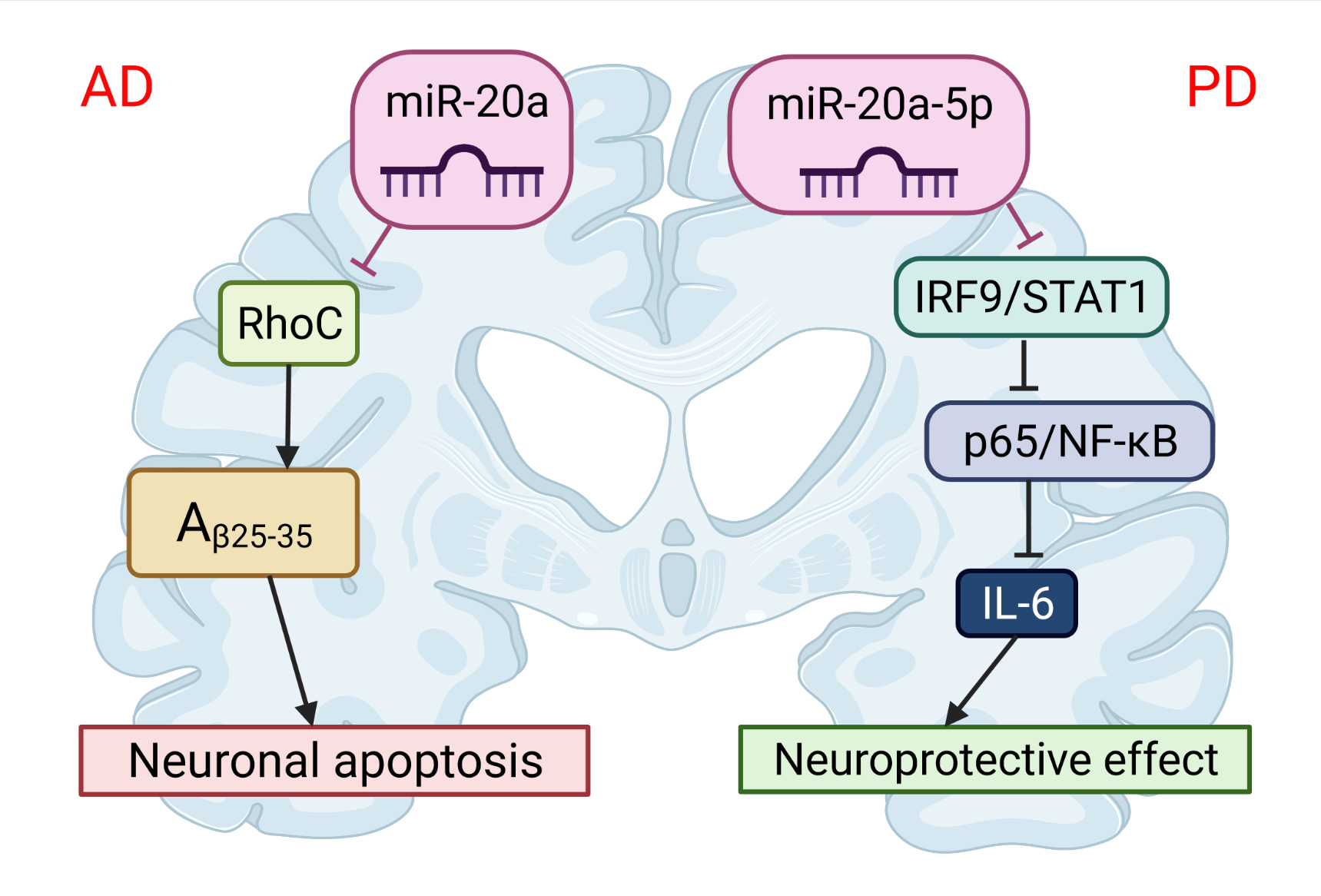 Figure 3. The role of miR-20 in the pathophysiology of neurodegenerative diseases. miR-20b-5p could disrupt Alzheimer’s disease progression by regulating neuronal apoptosis and cell viability by targeting the RhoC gene. miR-20a-5p has a protective effect on Parkinson’s disease-related neuronal death, which can be achieved by targeting the IRF9/NF-κB axis. This image was created using BioRender (accessed on 30 March 2022).

A similar conclusion was made by Wang et al. [19], who identified miR-20b as a negative regulator of APP in human cell lines and in primary human brain cell culture. They further showed that elevated miR-20b is associated with a greater risk of AD in post-mortem brains, and also that miR-20b’s reduction of APP expression was reversed by the addition of an antagonistic miR to miR-20b. Therefore, miR-20b-5p may be a perspective curative target for AD [19].

Studies have demonstrated that miR-20a-5p also contributes to neuroinflammation and oxidative stress and can serve as a novel therapeutic target for PD [20]. Wang et al. [20] has shown that miR-20a-5p alleviated mitochondrial dysfunction, inflammation, and cell apoptosis, induced by 1-methyl-4-phenyl pyridine ion- (MPP+)—an in vitro model of PD (Figure 3). This was realized by targeting interferon regulatory factor 9 (IRF9). Simultaneously, the STAT1/IRF9 complex could bind to the p65 subunit of NF-κB and result in increased synthesis of IL-6 [21]. Thus, miR-20a-5p has a protective effect on neuronal death related to PD.

More
© Text is available under the terms and conditions of the Creative Commons Attribution (CC BY) license; additional terms may apply. By using this site, you agree to the Terms and Conditions and Privacy Policy.
Upload a video for this entry
Information
Subjects: Biology
Contributors MDPI registered users' name will be linked to their SciProfiles pages. To register with us, please refer to https://encyclopedia.pub/register :
Nataliya Romanyuk
,
Ivan Arzhanov
View Times: 182
Revisions: 4 times (View History)
Update Date: 20 May 2022
Table of Contents
1000/1000
Hot Most Recent