Submitted Successfully!
Thank you for your contribution! You can also upload a video entry related to this topic through the link below:
https://encyclopedia.pub/user/video_add?id=2302
Check Note
2000/2000
Principal Postulates of Centrosomal Biology
Edit
Upload a video
This entry is adapted from 10.3390/cells9102156

The centrosome, which consists of two centrioles surrounded by pericentriolar material, is a unique structure that has retained its main features in organisms of various taxonomic groups from unicellular algae to mammals over one billion years of evolution. In addition to the most noticeable function of organizing the microtubule system in mitosis and interphase, the centrosome performs many other cell functions. In particular, centrioles are the basis for the formation of sensory primary cilia and motile cilia and flagella. Another principal function of centrosomes is the concentration in one place of regulatory proteins responsible for the cell's progression along the cell cycle. Despite the existing exceptions, the functioning of the centrosome is subject to general principles.

Nearly 150 years ago, almost simultaneously, three researchers described in dividing cells two symmetrically located structures that looked like a “radiance” and were called the centrosphere [1][2][3] (Fig 1). At the centrosphere's focus, granules were sometimes visible, which were originally called “polar corpuscles” [3]. Van Beneden and Nate [4] and independently Boveri [5] found that the polar corpuscles do not entirely disappear after mitosis, but remain in interphase, often located near the geometric center of the cell.

Later, these granules were named centrioles [6]. Shortly after, Henneguy and von Lenhossék showed that centrioles and basal bodies are the same structure at distinct functional stages. They proposed a “hypothesis about the homology of centrioles and basal bodies of flagella” [7][8]. This idea was overlooked for many years but ultimately is correct. After the ultrastructure of the centrosome was studied using transmission electron microscopy, centrioles (and basal bodies) were shown to have a conserved structure in many types of cells—hollow cylinders containing triplets of microtubules (MTs) in their walls [9][10][11]. The unique centrally symmetric structure of centrioles has always generated amazing, and sometimes fantastic, hypotheses about the centrosome's origin and functions. Fundamental advances in molecular biology, immunocytochemistry, and high-resolution light microscopy have allowed us to advance the understanding of the fundamental functions of this organelle that is small in size, but most important for many functions in the cells.

Postulate 1: The Centriole and the Basal Body Are Two Forms of the Same Organelle  [7][8].

Postulate 2: The Centriole Is a Polar Structure with Two Morphologically and Functionally Different Ends.

Postulate 3: The Outer Diameter of the Distal Part of the Centriolar Cylinder Is Smaller Than That of the Proximal End.

Postulate 5: In the Centrosome of Proliferating Cells, Two Centrioles Differ Structurally and Functionally.

Postulate 6: The Proximal Ends of the Mother and Daughter Centrioles Are Connected via a Bundle of Thin Fibers.

Postulate 8: Maintaining a Cylindrical Shape of Centrioles Can Be Independent of MT Triplets

Postulate 9: The Structure and Activity of Centrosomes Differ in Interphase and Mitotic Cells .

Postulate 10: New Centrioles Are Usually Formed in Association with Mother Centrioles but Can Be Formed without Preexisting Centriole De Novo .

Postulate 11: The Centrosomes Have Four Types of MT Nucleating Activity.

Postulate 12: The Complete Process of Centrioles Maturation from Procentriole to Mother Centriole Takes More Than One and a Half Cell Cycles in Duration .

Postulate 13: The Centrosome Is the Center of the Organization of Actin Microfilaments in the Cell .

Postulate 15: The centrosome is a multiprotein and multifunctional cell organelle that includes complexes of cell cycle regulation, cilia and flagella formation, cytokinesis regulation, centriole duplication and separation, as well as microtubule nucleation and anchoring. Some centrosomal proteins are simultaneously involved in the regulation of several intracellular processes [14]. 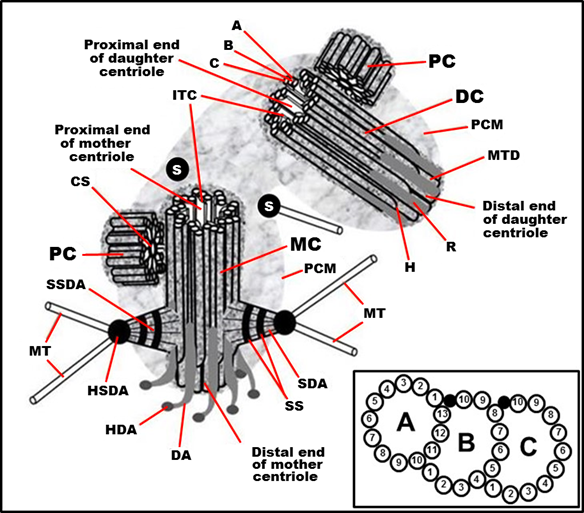 More
© Text is available under the terms and conditions of the Creative Commons Attribution (CC BY) license; additional terms may apply. By using this site, you agree to the Terms and Conditions and Privacy Policy.
Upload a video for this entry
Information
Subjects: Biochemistry & Molecular Biology
Contributors MDPI registered users' name will be linked to their SciProfiles pages. To register with us, please refer to https://encyclopedia.pub/register :
Tomer Avidor-Reiss
,
Rustem Uzbekov
View Times: 226
Revisions: 4 times (View History)
Update Time: 15 Oct 2020
Table of Contents
1000/1000
Hot Most Recent