Submitted Successfully!
Thank you for your contribution! You can also upload a video entry related to this topic through the link below:
https://encyclopedia.pub/user/video_add?id=22983
Check Note
2000/2000
Xylosma G. Forst. Genus
Edit
This entry is adapted from 10.3390/plants11091252

Xylosma G. Forst. is a genus of plants belonging to the Salicaceae family with intertropical distribution in America, Asia, and Oceania. Of the 100 accepted species, 22 are under some level of conservation risk. Around 13 species of the genus used as medicinal plants were found, mainly in Central and South America, with a variety of uses, among which antimicrobial is the most common.

The Salicaceae Mirb. family, to which the Xylosma genus belongs, is famously medicinal because of the Salix genus (willow), the pharmacological properties of which were already used in ancient Mesopotamia, and were extolled in the first century CE, in Dioscorides’ De Materia Medica [1][2].
The Xylosma genus is one of the 55 that conform the Salicaceae family [2], and is composed of 100 accepted species [3], although others list 45 [4]. Until recently, it was included in the now-deprecated Flacourtiaceae family, but has now been assigned to Salicaceae [5]. The name stems from the Greek words for “wood” and “smell” in reference to odoriferous quality of the wood of some Pacific species of the genus [4], presumably X. orbiculata and X. suaveolens used to perfume coconut oil by early South Pacific inhabitants [6]. At first, the genus was named Myroxylon (myrrh-wood) but was changed to Xylosma to avoid confusion with South American balsam trees [7]. Not all species in the genus are sweet-smelling: X. maidenii timber, for example, is foul-smelling. Xylosma species are described in detail by Woodson et al. [8].

Species in the Xylosma genus have several uses and properties, from landscaping (Xylosma congesta (Lour.) Merr.), beekeeping (Xylosma venosa N. E. Br. [9]), timber, firewood, to food and medicine; notably Xylosma longifolia Clos. Due to the thorns that some species of the genus have, common names such as “do not touch me” (Xylosma coriacea (Poit.) Eichler) or “deer antlers” (Xylosma spiculifera (Tul.) Triana and Planch.) are used for them [10]. Eleven species of the genus, particularly Xylosma vincentii Guillaumin, are known to be nickel hyperaccumulators [11][12] which presents potential for phytoremediation and phytomining [13].

Species belonging to the Xylosma genus are present in subtropical America, Southeast Asia, and Oceania. Of the 100 species listed in the genus [3], 61 are found in America, 8 in Asia, and 31 in Oceania. Figure 1 shows examples of species of the genus. The map in Figure 2 shows the intertropical, and to a lesser extent, temperate, distribution of Xylosma species, by country. 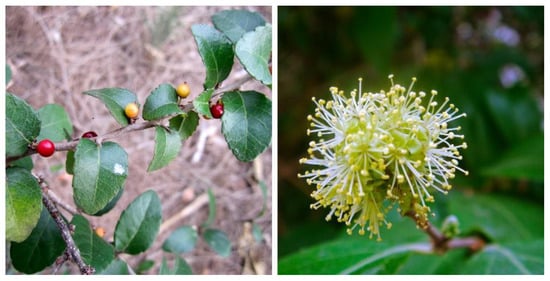 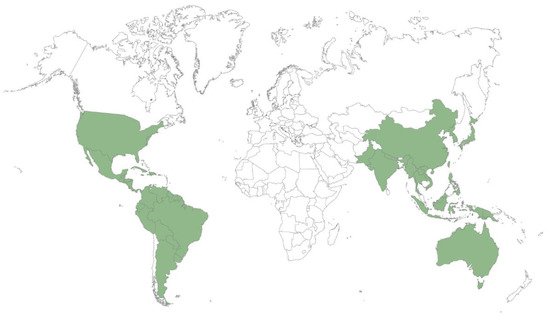 Figure 2. Worldwide Xylosma distribution, by country, after [3].
Of the 100 species of the genus, 7 are listed as vulnerable, 9 as endangered, and 6 as critically endangered. In total, 22% of the species in the genus are considered as species of concern [14]. This should be considered when evaluating potential industrial uses for these species.

Of the 100 species of the genus, few appear in the scientific literature, and even fewer are mentioned from an ethnopharmacological or ethnoveterinary perspective. Notwithstanding, Xylosma species are a part of the traditional Chinese medicinal system, with documented uses of X. congesta appearing as early as the XVI century CE [15].
Few of the Xylosma species are recognized as medicinal. Table 1 summarizes the species with reported medicinal use along with their stated ethnopharmacological uses, when available. The Anatomical Therapeutic Chemical (ATC) Classification by the World Health Organization (WHO) is used to classify the uses for each species [16]. Not all species are identified in the literature, with general mentions as “Xylosma sp.” in some cases.
Table 1. Medicinal and veterinary use of Xylosma species, listed in alphabetical order.
NS: Not specified. ATC categories are as follows. A: Alimentary tract and metabolism, B: Blood and blood forming organs, C: Cardiovascular system, D: Dermatological, G: Genito urinary system and sex hormones, H: Systemic hormonal preparations, excluding sex hormones and insulins, J: Anti-infective for systemic use, L: Antineoplastic and immunomodulating agents, M: Musculo-skeletal system, N: nervous system, P: Antiparasitic products, insecticides, and repellents, R: Respiratory system, S: Sensory organs; V: Various [16]; STDs: Sexually transmitted diseases, Vet: veterinary.
Most Xylosma species in use are from Central and South America (38% and 31%), followed by China (23%) and India (8%). This is roughly in accordance with the local abundance of species. There are no reports of ethnomedicinal uses of Xylosma in Oceania. Uses by country are shown in Figure 3.

Figure 3. Ethnopharmacological and ethnoveterinary uses of Xylosma spp. Circle diameter proportional to use reports for the country.
According to the ATC classification, the most frequent uses of Xylosma spp. in ethnopharmacology are dermatological, nervous system, and respiratory system, with 17% of the uses each, alimentary tract and metabolism with 11%, and genitourinary system and sex hormones with 6%. Additionally, 11% of the uses are veterinary.
As to the morphological structures used, the most common are leaves and barks with 33% each, and both stems and roots with 11% each.

Biological activity tests of Xylosma have been carried out mostly in vitro, with no reported in vivo research, with plant extracts, be they leaf, root, bark, or the whole plant. Different solvents and solvent mixtures have been used for the extracts, mainly methanol and ethanol.

In vitro research on biological activity of Xylosma species centers around 7 identified species and one unspecified one. The research figures are summarized in Figure 4, and the research is detailed in Table 2.

Figure 4. Summary of in vitro activity of Xylosma species.
Table 2. In vitro activity of Xylosma extracts. Species are in alphabetical order.
DCM: Dichloromethane; MIC: Minimum inhibitory concentration; α-MSH: melanocyte-stimulating hormone. LXR: LXRα Fold Activation.
In vitro biological activity tests devote the most attention to leaves (55%), with bark (33%) and root (11%) used to a lesser extent. Extraction solvents are ethanol (42%), methanol (21%), and to a lesser extent petroleum ether, chloroform, dichloromethane, and hexane, with 8% each. The solvent choices support the assumption that most active compounds are polar, and are thus extracted with polar solvents.
Testing centers on antibacterial (44%) and antifungal (44%) activity reflects the main ethnopharmacological use but appears to leave other traditional uses unexplored.
Cytotoxicity assays involving Xylosma extracts show no significant cytotoxicity for Xylosma prockia nor for Xylosma congesta leaf extracts [42][45]. Moderate cytotoxicity was reported for methanol Xylosma terrae reginae extracts [43]. 2,6-dimethoxybenzoquinone (33) isolated from Xylosma velutina is reported as cytotoxic [46].
Even though there is no in vivo research concerning Xylosma species in the literature, there are several patents that include Xylosma extracts for cosmetic, veterinary, and traditional medicinal uses, such as hangover cures [23].

More
© Text is available under the terms and conditions of the Creative Commons Attribution (CC BY) license (http://creativecommons.org/licenses/by/4.0/)
Upload a video for this entry
Information
Subjects: Chemistry, Medicinal
Contributors MDPI registered users' name will be linked to their SciProfiles pages. To register with us, please refer to https://encyclopedia.pub/register :
Rodrigo Duarte-Casar
,
Juan Carlos Romero-Benavides
View Times: 87
Revisions: 4 times (View History)
Update Time: 18 May 2022
Table of Contents
1000/1000
Hot Most Recent