Submitted Successfully!
Thank you for your contribution! You can also upload a video entry related to this topic through the link below:
https://encyclopedia.pub/user/video_add?id=22956
Check Note
2000/2000
Textile-Integrated Thermocouples
Edit
This entry is adapted from 10.3390/ma13030626

The integration of conductive materials in textiles is key for detecting temperature in the wearer´s environment. When integrating sensors into textiles, properties such as their flexibility, handle, and stretch must stay unaffected by the functionalization. Conductive materials are difficult to integrate into textiles, since wires are stiff, and coatings show low adhesion. This work shows that various substrates such as cotton, cellulose, polymeric, carbon, and optical fiber-based textiles are used as support materials for temperature sensors. Suitable measurement principles for use in textiles are based on resistance changes, optical interferences (fiber Bragg grating), or thermoelectric effects.

1. Concepts of Thermocouple Construction in Textiles

Different thermocouples have been used to measure temperature on woven, non-woven, and knitted textiles.
Figure 1a shows the construction of five thermocouple pairs, which consist of five aluminum conductor strips and a large copper-coated cellulose fabric as a second conductor. Using the copper-coated cellulose textile as a conductor material makes the thermocouple construction more flexible compared to metal wires. The size of the copper-coated cellulose textile can be varied, which allows the positioning of additional thermocouples independently (Figure 1b). This thermocouple construction needs only one conductor as a sensing line. Figure 1c shows a scheme of electron flow in thermoelectric materials. It describes the formation of a temperature difference across a conductor when two junctions (regions) are set to different temperatures. The hot junction (region) generates more free electrons compared to the cold junction. Thus, an electron flow occurs from the hot to the cold junction (region) [1]. 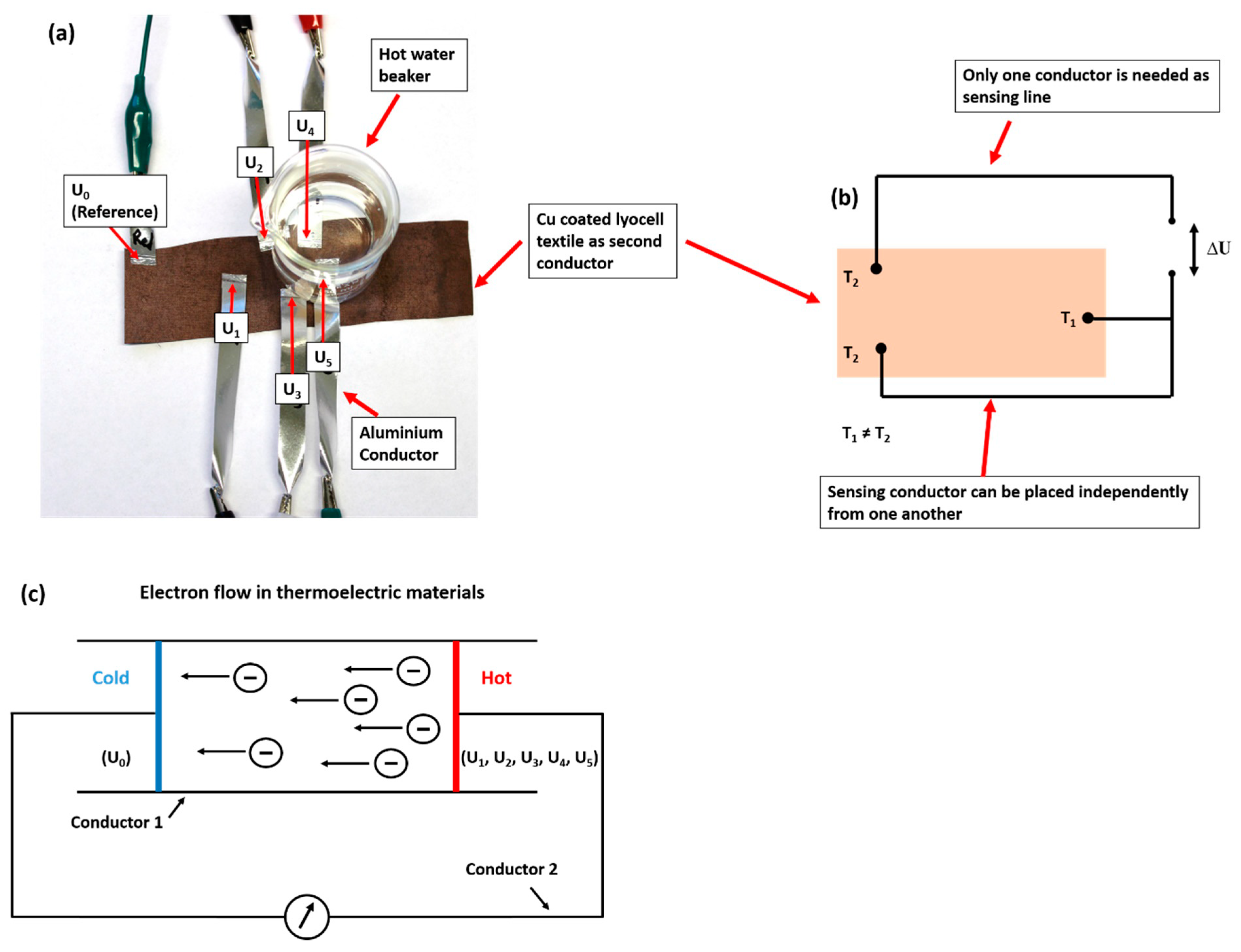 Figure 1. The construction of five thermocouple pairs (a), the description of electron flow in thermoelectric materials (b) according to [1], and (c) an electrical circuit. U0 is the reference junction and U1, U2, U3, U4, and U5 are measuring junctions.
Thermocouples were manufactured from conductive poly(3,4-ethylenedioxythiophene), poly(4styrenesulfonate) (PEDOT-PSS) and polyaniline by screen printing on woven cotton textiles [2]. In addition, thermocouples were used to detect resistivity and temperature as a function of time (up to 35 h). Thermocouple assemblies made from PEDOT-PSS and polyaniline showed a Seebeck coefficient of 18 µV/K comparing to 15 µV/K copper polymer assemblies [2]. In a further composition, thermocouples were manufactured from several textiles such as polyacrylonitrile staple fibers, steel staple fibers, a silver-coated polyamide thread, a knitted steel fabric, a woven polyacrylonitrile fabric, and a graphite non-woven textile [3]. The electrical signal generated from thermocouples was used to measure the temperature in the range of 30 to 120 °C [3]. The thermocouple was constructed from L-shaped copper and constantan (Cu/Ni) stripes on polypropylene textile, which were formed by magnetron sputter deposition. Comparison with a commercial thermocouple indicated no difference in temperature detection [4]. Temperature sensors were constructed from copper–nickel wire thermocouples, which were soldered onto a firefighter´s glove [5].
Thermocouple sensors have been manufactured from wires to monitor the thermal situation in socks and gloves [6]. The body heat regulation was monitored by a sensor-based platinum array outside of the garment [6]. Thermocouple sensors were manufactured from copper and constantan wires and were used to detect temperature at 12 different locations in T-shirts [7]. Consequently, a temperature distribution depending on the garment´s size and a distance from the body could be measured [7].
Copper-coated textiles can be used as flexible and lightweight conductor materials in a thermocouple array (Figure 2). The number of conductive lines can be reduced to measuring junctions (red spots), and a reference junction (green spot) can be formed by the attachment of five aluminum conductors (U0, U1, U2, U3, U4, and U5).

Figure 2. Copper-coated cellulose textiles used as a conductor matrix for temperature measurement.
Thermocouples were used to measure heat flux through polyester and polyester/cotton fabric with different weaves (plain, satin, and twill [8]. The fabric´s temperature was detected at thermocouple points, which were related to reference points at room temperature [9].

Figure 3 shows eight possible application areas, where the integration of sensors in textiles is of interest. The temperature detection already has been investigated in functional garments, sport garments, the automobile industry, medical institutions, security packaging, and the fashion industry. The future seamless compatibility of sensors with textiles will increase their wearing comfort and lead to prototypes, which can be produced on an industrial scale.

Figure 3. Eight areas for sensor integration in textiles in November 2019.

Besides sweat, water content influences the wearer´s comfort in textiles. The presence of water in textiles increased the mass and reduced the heat transfer in sport and protective clothing [26]. Textiles with high water vapor permeability can transfer moisture from the skin through the textile into the environment, which continuously keeps the human body in thermal equilibrium.
Therefore, the transmission of water vapor was recorded as a function of air temperature and relative humidity in polytetrafluoroethyle (PTFE) laminated with nylon fabric, woven cotton fabric, polyester fabric (laminated with polyurethane), and hybrid PTFE membranes. The transmission of water vapor was high at high air temperature and low relative humidity [27].
In addition to the body motion, health condition can be monitored by using biocompatible and stretchable carbon nanotube-based electrodes (CNTs), which are used to detect sweat [28]. Sweat also can be detected by a wearable colorimetric pH sensor, which provides information on the metabolic state and activity of a patient. The collection of sweat in T-shirts was investigated on textile biosensors in health management [29].
Figure 4 shows the increase in the literature on concepts, which are related to thermal effects and energy generation. The concepts are highlighted with green for “thermal insulation in textiles”, yellow for “heat transfer in textiles”, blue for “textiles exposed to temperature”, and red for “energy harvesting in textiles”. Energy harvesting in textiles is a new fast growing field. Its role will be significant with the development of miniaturized temperature sensors that seamlessly adapt to textiles. 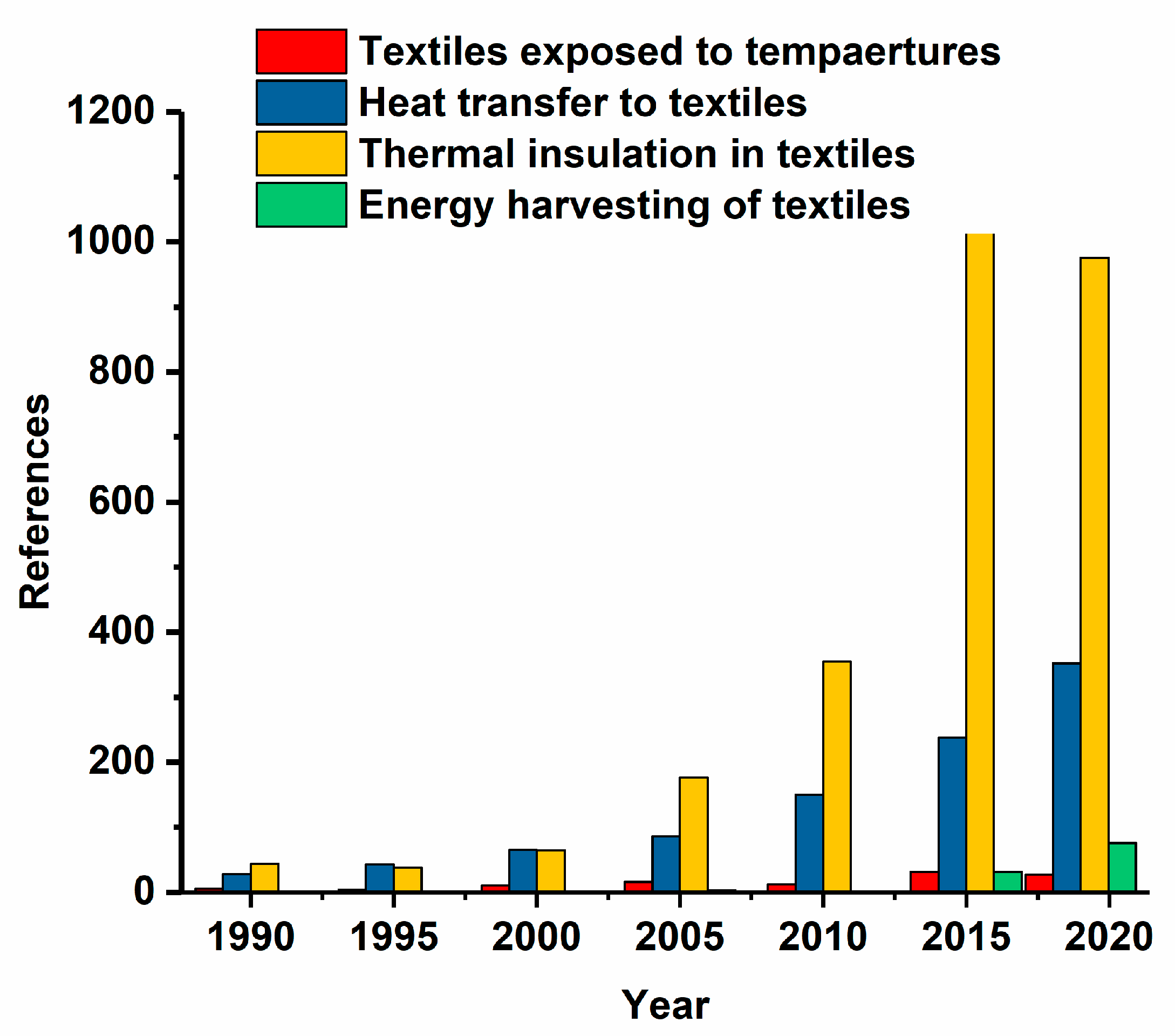 Figure 4. Temperature measurement in textiles and their use for energy generation.
The thermoelectric effect also can be used to generate electrical energy from temperature differences between a human body and the environment.
As an example, the heat of the human body was used to power a flexible thermoelectric glass fabric, which was formed from eight thermocouples consisting of Bi2Te3 and Sb2Te3 films. It indicated an output voltage of 28 mWg−1 (ΔT = 50 K) [30]. The temperature of the human body was detected by polyethylene (PE) and polyethylene oxide (PEO) substrates, which were melt mixed with 40 wt % Ni microparticles. The PEO/PE matrix treated with 40 wt % Ni showed sensitivity as temperature sensors of 0.3 V/°C in the range of 35 to 42 °C compared to 50 wt % [31]. The skin temperature was measured by an embedded wire sensor, which was composed of aluminum carbon epoxy composites. These composites detected a higher skin temperature compared to multiple thermistors [32].

More
© Text is available under the terms and conditions of the Creative Commons Attribution (CC BY) license (http://creativecommons.org/licenses/by/4.0/)
Upload a video for this entry
Information
Subjects: Materials Science, Textiles
Contributors MDPI registered users' name will be linked to their SciProfiles pages. To register with us, please refer to https://encyclopedia.pub/register :
Thomas Bechtold
,
Waleri Root
,
Tung Pham
View Times: 33
Revisions: 2 times (View History)
Update Time: 16 May 2022
Table of Contents
1000/1000
Hot Most Recent