Submitted Successfully!
Thank you for your contribution! You can also upload a video entry related to this topic through the link below:
https://encyclopedia.pub/user/video_add?id=22942
Check Note
2000/2000
Myocardial Infarction and Immuno-Inflammatory Response in CAE
Edit

Coronary artery ectasia (CAE) is a relatively common coronary angiographic finding, with an incidence of 1.5–5% and geographical variations in prevalence. CAE has been associated with a male predominance. Anatomically, CAE more frequently affects the right coronary artery and the proximal one third of the vessels.

Coronary artery ectasia (CAE) is a relatively common coronary angiographic finding, with an incidence of 1.5–5% and geographical variations in prevalence. CAE has been associated with a male predominance and more frequently affects the right coronary artery and the proximal vessels. Currently, the pathogenesis of CAE is not fully understood, with some evidence suggesting an atherosclerotic aetiology and other reports describing a distinct pathology [1].
While the terms CAE and coronary artery aneurysm (CAA) are often used interchangeably, they carry distinct phenotypes and definitions. CAE is defined as a diffuse dilatation of the coronary artery of at least 1.5 times the normal artery with a length of over 20 mm or greater than one third of the vessel.. Histologically, CAE presents with extensive destruction of musculoelastic elements, with marked degradation of collagen and elastic fibres and disruption of the elastic lamina. Conversely, CAA is a dilatation with a focal appearance. CAA termed saccular if the transverse diameter is greater than the longitudinal, and fusiform for the opposite. That's why CAA is different anatomically that occurs usually in conjunction with other conditions and hence reflects a different disease [2].
Given that CAE is associated with atherosclerosis in 50% of cases, a common underlying aetiology has been postulated. It is important to note, however, that approximately 30% of cases are associated with vasculitis including Kawasaki disease and Takayasu arteritis, and connective tissue diseases such as Ehlers–Danlos or Marfan’s syndrome. The remainder are congenital or idiopathic [3]. In particular, congenital CAE has been documented with other cardiovascular abnormalities including bicuspid aortic valve, aortic aneurysms, pulmonary stenosis, and ventricular septal defects.

CAE patients with acute myocardial infarction (MI) undergoing percutaneous coronary intervention (PCI) have reported a high thrombus burden and greater use of glycoprotein IIb/IIIa inhibitors (GPI) and post-procedural anticoagulation [4]. Indeed, thrombus formation may be inherently related to abnormal flow within coronary ectatic lesions, resulting in distal embolization. While higher rates of no-reflow and lower Thrombolysis in Myocardial Infarction (TIMI) flow grades have been observed after percutaneous coronary intervention (PCI), long term survival is good [5]. One study reported that no stent was deployed in 44% of patients undergoing coronary angiogram, compared with 7.5% in a comparable group with no CAE [6]. Furthermore, stent deployment conferred a better in-hospital outcome, although long term outcomes were shown to be similar with relatively high rates of non-fatal MI and angina. In a large observational study evaluating the long-term outcomes of 1698 patients with acute MI, the incidence of major adverse cardiac events (MACE) (p < 0.001), cardiac death (p = 0.004), and non-fatal myocardial infection (p < 0.001) was significantly higher in patients with CAE [7]. An increased risk of MACE has also been identified in patients with diffuse CAE as compared to those with focal CAE [8].

Mediators of chronic inflammation, such as growth factors and cellular adhesion models, have been widely described in the pathogenesis of CAE. Specifically, the expression of specific inflammatory markers, particularly IL-6 and CRP, is known to be higher in CAE compared with CAD and healthy controls [9]. Most recently, a large meta-analysis elucidated the role of other contributory markers, neutrophil to lymphocyte ratio (NLR) and red cell distribution width (RDW), in the pathogenesis of CAE [10].
A report on immune-inflammatory response in CAE demonstrated significantly higher systemic levels of INF-gamma, TNF-alpha, IL-1ß, and IL-8, and lower levels of IL-2 and IL-4 compared with the control group [11]. In comparison with CAD, CAE patients had significantly higher levels of IL-8 and IL-1ß, and significantly lower levels of IL-2 and IL-4. Analysis of isolated CAE versus mixed CAE did not demonstrate any differences with respect to cytokine levels.
Inflammatory markers, C-reactive protein and albumin are believed to be involved in the progression and severity of CAE. Recently, a significantly higher C-reactive protein-to-albumin ratio has been associated with isolated CAE when compared to obstructive CAD and controls. Notably, C-reactive protein-to-albumin ratio also correlated strongly with the severity of CAE, which provides further evidence for its potential role in detection and management [12].
While the cytokine milieu in CAE shares similarities with CAD, there are some distinct differences. Notably, the higher presence of leukocytes in CAE presents as higher levels of IL-6 and lower levels of IL-2. This cytokine-mediated inflammatory response serves as the basis for impaired coronary circulation.
High levels of TNF-α are known to be present in CAD where stimulation of the Th1 pathway leads to activated M1 macrophages which promote atherogenesis. CAE in the absence of CAD is also associated with high levels of TNF-α, which may imply a common mechanism of macrophage activation. Nevertheless, the low level of IL-2 in CAE may suggest an alternative trigger for the direct activation of the Th1 pathway.
The pro-inflammatory marker, IL-6, has a role in inhibiting macrophage activation by inhibiting macrophage scavenger receptor-A, but is not associated with CAD [13]. Additionally, the non-atherogenic process in CAE may be partially explained by lower levels of IL-4, secreted by Th2. Likewise, the lower levels of IL-2 seen in CAE may also support a non-atherogenic pathway through the absence of Th1 cell response which is associated with CAD and acute coronary syndrome.
Another report [14] found some subtle differences in cytokine levels. Triantafyllis et al. reported high IL-4 and low IL-2 levels in CAE compared with CAD and control subjects, and high IL-6 in CAE and CAD compared with control subjects. They concluded that Th2 activation (in the presence of high IL-4) is a cardinal feature of CAE (Figure 1, Pathway A). The relationship of Th2 with atherogenesis is complex as IL-4 produced by Th2 reduces IFN-y activity and so can be considered antiatherogenic. However, in some circumstances in mouse models, IL-4 was found to be associated with the promotion of atherosclerosis. Other Th2 related cytokines such as IL5 and IL33 are antiatherogenic. 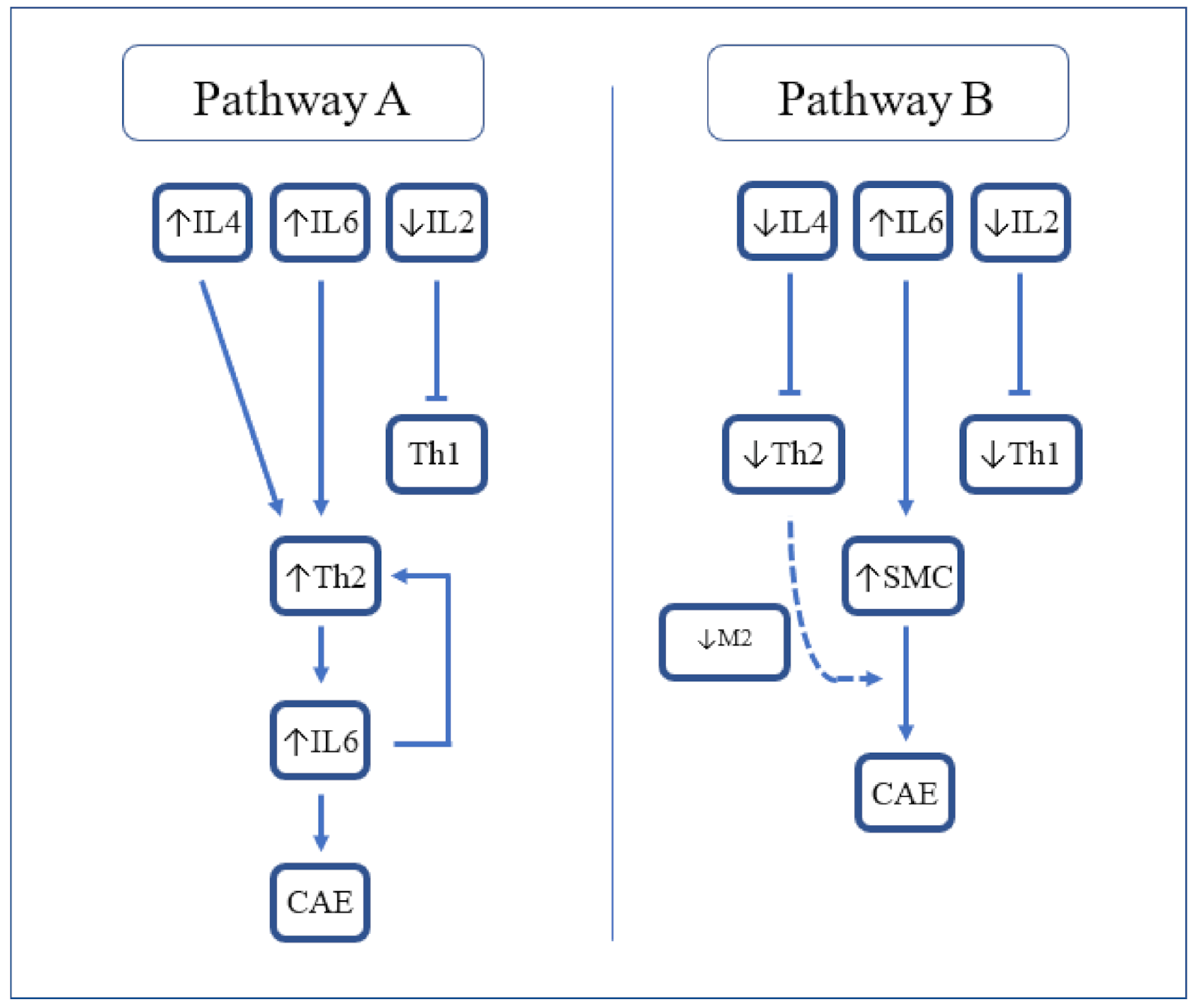 Figure 1. Proposed cytokine-mediated pathways resulting in CAE. IL-2 = Interleukin-2; IL-4 = Interleukin-4; IL-6 = Interleukin-6; Th2 = T-helper 2; CAE = coronary artery ectasia; SMC = smooth muscle cells; and M2 = M2 macrophages.
In contrast, Bose et al. reported low IL-4 and IL-2 and high IL-6 in CAE compared with CAD and control groups. They proposed that the activation of smooth muscle cells by IL-6 leads to vascular remodelling and, in the absence of M2 macrophages to limit tissue damage, leads to the development of CAE (Figure 1. Pathway B) [15].
A similar histological examination of CAE and CAD supports the notion that ectasia may be a variant of atherosclerosis. Histology demonstrated extensive destruction of the musculo-elastic element of the vessel wall with degradation of medial collagen and disruption of the internal and external elastic lamina. The expansive remodelling of the external elastic membrane, likely due to the activation of MI macrophages, underlies luminal expansion in CAE. Specifically, elevated TNFa and IFNy from activated M1 macrophages promote macrophage transmigration via ICAM1 and VCAM1 into the intima and induce MMPs that inhibit collagen synthesis.
Further evidence for a common underlying pathogenesis with atherosclerosis emerges from recent reports demonstrating MCP-1 as an independent predictor of CAE. As previously mentioned, MCP-1 is directly responsible for disturbed blood flow and is critical in the development of atherosclerosis, specifically with regard to the recruitment of monocytes into the vascular wall. Additionally, higher levels of MCP-1 have also been associated with higher incidence of acute ischemic events in patients with CAD [16].
Of note, significantly elevated mean platelet volume (MPV) has also been observed with CAE and CAD groups compared to controls. Elevated MPV levels result from increased platelet activation and therefore predispose patients to a higher risk of thrombotic events and myocardial infarction [17].