+1 point
Thank you for your contribution! You can also upload a video entry related to this topic through the link below: https://encyclopedia.pub/user/video_add?id=22722
Check Note
2000/2000
Biological Properties of Flavonoids

It has been reported that nutritional phytochemicals present in fruits, vegetables and cereals, such as flavonoid polyphenolic compounds, can improve bone mineral density by several mechanisms, in addition to having beneficial effects on bone homeostasis and health. In addition to their nutritional properties, flavonoids may have applicability in the manufacture of polymers and can be used as stabilizing agents for biopolyesters, such as polylactide (PLA) and polyhydroxyalkanoate (PHA), which have been widely used in tissue engineering for membranes and scaffolds.

Bone is a highly resistant tissue composed of a mineralized organic matrix and different types of cells [1][2]. Despite considerable mechanical resistance, bone can be damaged by trauma, pathologies and osteometabolic disorders, which increase tissue susceptibility to fracture. However, bone tissue is in a constant process of remodeling, so it has considerable regenerative capacity [2][3]. Considering the active metabolism of bone, the integrity of this tissue depends on the balance between the processes of bone formation and resorption [1][4].
The balance between bone formation and resorption processes is coordinated by the interaction of several factors that act in the microenvironment, such as bone cells, cytokines, hormones, growth factors, transcriptional factors, ions and proteins of the extracellular matrix [2][3]. In the bone tissue environment, specialized cells, such as osteoblasts and osteoclasts, are responsible for bone matrix secretion and resorption, respectively [2][3] (Figure 1). Proteins synthesized by osteoblasts, such as alkaline phosphatase (ALP) and osteocalcin (OCN), are directly involved in matrix mineralization [5][6]. Several transcription factors, such as runt-related transcription factor 2 (Runx2) and Osterix (OSX), constitute key factors for the osteoblastic differentiation of undifferentiated cells, such as mesenchymal stem cells (MSCs) [6][7]. Likewise, bone morphogenetic proteins (BMPs) and Wnt/β-catenin signaling are the main pathways responsible for modulation of transcription factors related to osteoblastic differentiation [6][7]. In turn, osteoclasts regulate the process of bone formation and promote tissue resorption by the action of acids and proteolytic enzymes secreted into the bone matrix [8]. 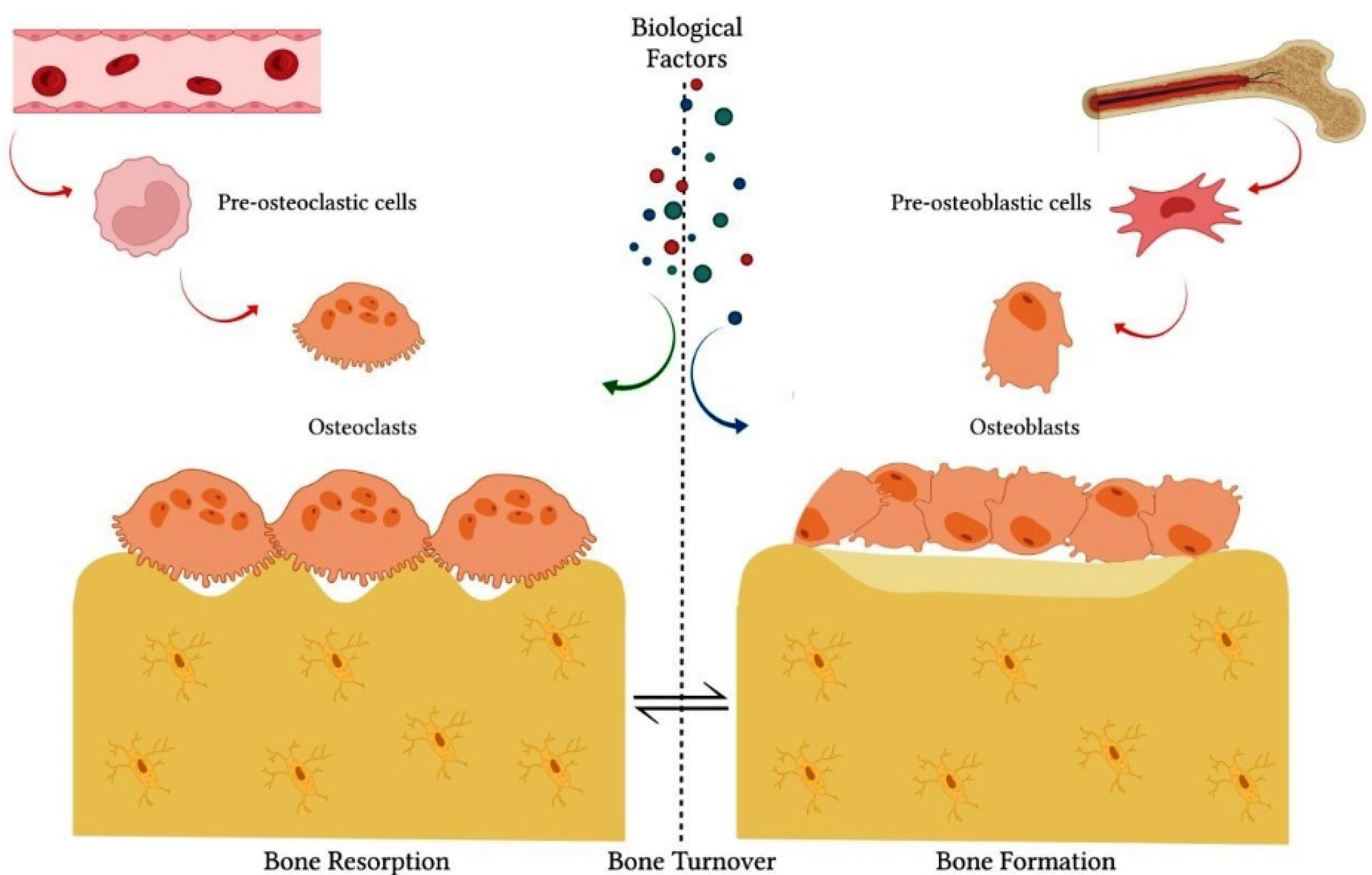 Figure 1. The integrity of bone tissue depends on the balance between bone formation and bone resorption processes. These processes are coordinated by the interactive action of specialized cells, such as osteoblasts and osteoclasts. Several biological factors also act in the process of physiological bone remodeling, such as cytokines, hormones, growth factors, transcriptional factors, ions and proteins of the extracellular matrix, in addition to other cell lines.
The main classes of enzymes that act on the degradation of the organic matrix are cysteine proteases and matrix metalloproteinases (MMPs) [9]. Osteoclastogenesis is also crucially regulated by several factors, such as receptor activator of nuclear factor-κB ligand (RANKL), receptor activator of nuclear factor-κB (RANK), osteoprotegerin (OPG) and monocyte colony-stimulating factor (M-CSF) [8]. M-CSF constitutes a hematopoietic growth factor that promotes the proliferation and differentiation of osteoclast progenitors, such as monocyte/macrophage-lineage cells [8][10]. RANKL and OPG are proteins expressed predominantly by osteoblasts and play an important role in bone formation. RANKL binds to RANK present on osteoclasts and their precursors [8]. RANKL/RANK interaction promotes osteoclast differentiation, activity and survival [8][11]. In turn, OPG acts as a competitive inhibitor by interacting with RANKL [8]. Thus, the RANKL/OPG ratio and crosstalk between osteoblasts and osteoclasts are directly related to bone turnover [8][11][12][13].
However, bone metabolism can be affected by several factors, such as age and pathophysiological conditions of the organism. Bone loss associated with advance of age is due to and imbalance between osteoblast and osteoclast activities [8][13]. Estrogen deficiencies are commonly associated with increased bone loss, as estrogen regulates osteoclast activity and apoptosis [13]. Likewise, hormonal changes and metabolic disorders can accelerate the resorption process and cause bone diseases, such as osteoporosis, characterized by reduced bone mass [14]. Metabolic disorders and autoimmune diseases, such as rheumatoid arthritis, are often associated with inflammatory reactions [15]. Consequently, inflammatory processes and immune reactions can disrupt bone homeostasis and accelerate tissue resorption. Under these conditions, increased levels of inflammatory cytokines, such as tumor necrosis factor-alpha (TNF-α), interleukin-1 (IL-1), interleukin-6 (IL-6), interleukin-7 (IL-7) and interleukin-17 (IL-17), stimulate the expression of RANKL, consequently favoring osteoclastogenesis [13]. Additionally, cellular oxidative stress promotes an increase in the production of reactive oxygen species (ROS) in bone cells. In turn, increased levels of ROS favor bone resorption by stimulating osteoblast apoptosis and senescence, RANKL overexpression and osteoclastic differentiation [13][16]. Therefore, bone turnover is influenced by several biological conditions.
Despite the native biological mechanisms that contribute to tissue healing, in many situations, therapeutic interventions are necessary to favor bone tissue regeneration. Some therapies have been proposed to promote the regeneration of extensive injuries and to improve the biomechanical properties of newformed bone; such proposed therapies include bone grafts [17][18], biomaterials [19][20][21][22], growth factors [18][23], photobiomodulation or ultrasound strategies [24][25][26] and cell-based therapies [27][28][29]. Furthermore, considering that the age and pathophysiological conditions of the organism can also accelerate bone loss, other therapeutic strategies have been investigated to minimize bone loss or to induce bone neoformation. Among them, the use of natural phytochemical agents has been highlighted as a promising therapeutic proposal, considering that these natural compounds have several beneficial biological properties. It has been reported that nutritional phytochemicals present in fruits, vegetables and cereals, such as flavonoid polyphenolic compounds, can improve bone mineral density by several mechanisms, in addition to having beneficial effects on bone homeostasis and health [13][16]. In addition to their nutritional properties, flavonoids may have applicability in the manufacture of polymers and can be used as stabilizing agents for biopolyesters, such as polylactide (PLA) and polyhydroxyalkanoate (PHA), which have been widely used in tissue engineering for membranes and scaffolds [30][31].

Flavonoids are polyphenolic compounds present in citrus fruits, grapes, raspberries, apples, vegetables, legumes and grains, as well as beverages, such as green tea, cocoa, coffee and red wine [32] (Figure 2). Structurally, flavonoids are formed by a carbon chain and can be classified into several subgroups according to the chemical composition of their structure. The main flavonoid subgroups of nutritional interest are flavanols or catechins, flavones, flavonols, flavanones, anthocyanidins and isoflavones [33]. 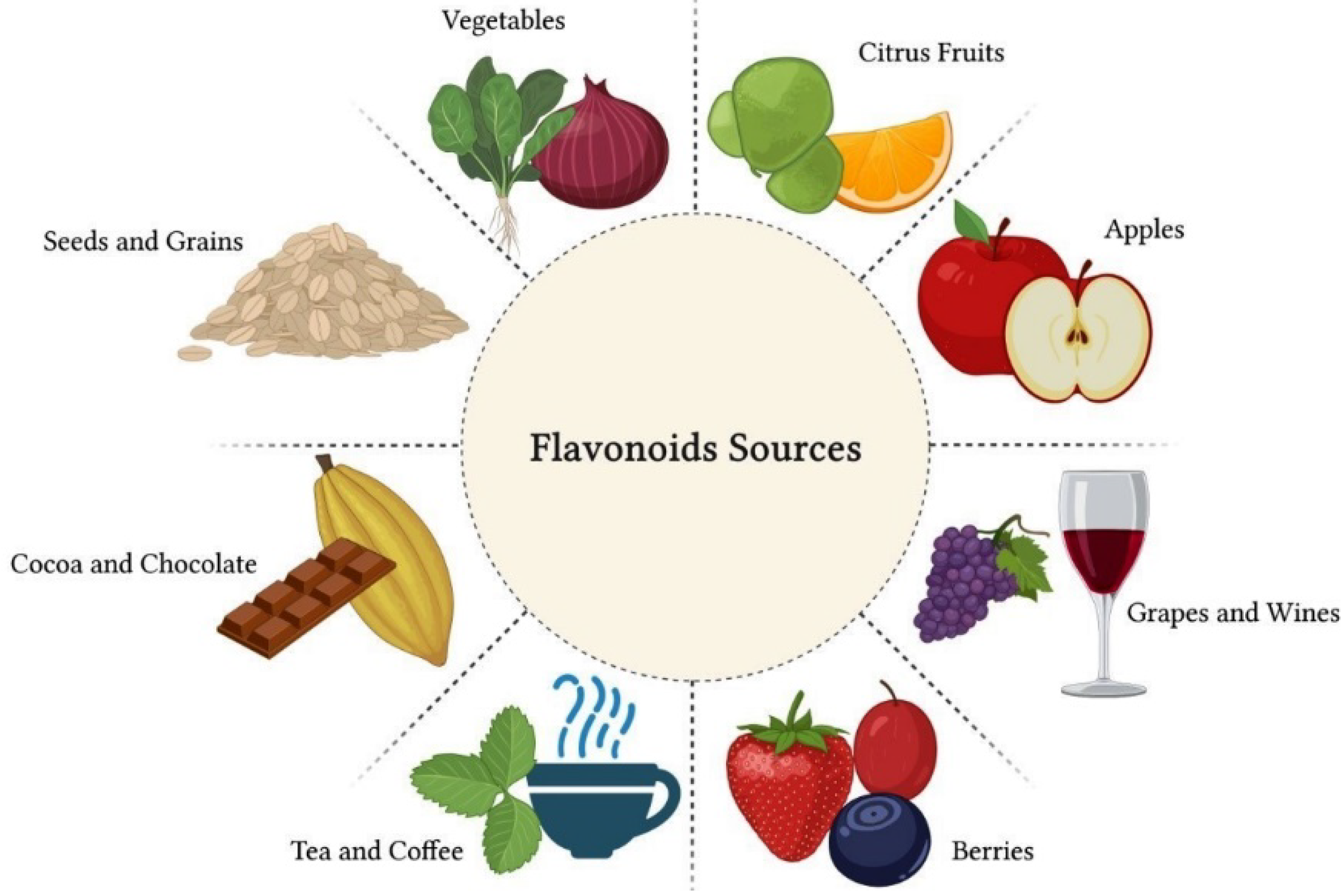 Figure 2. Flavonoids are polyphenolic compounds present in citrus fruits, grapes, raspberries, apples, vegetables, legumes and grains, as well as beverages, such as green tea, cocoa, coffee and red wine. These natural compounds have great nutritional value due to their therapeutic properties.
In general, flavonoids have therapeutic properties and can provide several health benefits. The therapeutic effect of flavonoids is attributed to antioxidant, anti-inflammatory, antiallergic, antimicrobial, antitumor and antiviral properties [34][35][36]. There is evidence in the literature that regular consumption of a diet rich in flavonoids can contribute to the prevention of cardiovascular, neurodegenerative and inflammatory diseases, as well as metabolic disorders, such as diabetes mellitus [33][37][38]. Some studies have reported that flavonoids can reduce plasma levels of triglycerides and cholesterol and act by inhibiting tumor growth [39][40]. Other studies have shown that flavonoids can reduce the formation of ROS and the synthesis of inflammatory cytokines [38][41][42]. Comalada et al. (2006) reported that flavonoids, including the flavanone hesperetin, significantly inhibited the proliferation of bone marrow macrophages in vitro without significantly reducing the viability of these cells [42]. In the same study, some flavonoids were found to downregulate inducible nitric oxide synthase (iNOS) expression and nitric oxide (NO) production in cultures of LPS-activated macrophages, in addition to inhibiting the release of TNF-α by these cells [42].
Hwang and Yen (2008) showed that flavonoids inhibited ROS formation in vitro, significantly reducing cell oxidative stress [38]. The control of cellular oxidative stress is essential for tissue protection, considering that ROS react with macromolecules, such as proteins, carbohydrates, lipids and nucleic acids, which can cause irreversible deleterious changes [43]. Cheng et al. (2017) evaluated the anti-inflammatory properties of Citrus wilsonii Tanaka extract, a traditional Chinese medicine used to treat cough and sputum [41]. Citrus wilsonii Tanaka extract contains large amounts of naringin, as well as other flavonoids, such as naringin, eriocitrin, hesperidin, neohesperidin, rhoifolin, naringenin and poncyrin. In addition to showing very low cytotoxicity in macrophage culture, this extract significantly inhibited the synthesis of prostaglandins E2 (PGE2) and cyclooxygenase-2 (COX-2) and suppressed the expression of inflammatory mediators, such as TNF-α, IL-6 and interleukin-1 beta (IL-1β) [41]. The authors reported that the flavonoids present in the extract may have considerable potential for the treatment of chronic inflammatory diseases [41]. Figure 3 summarizes the therapeutic properties of flavonoids. 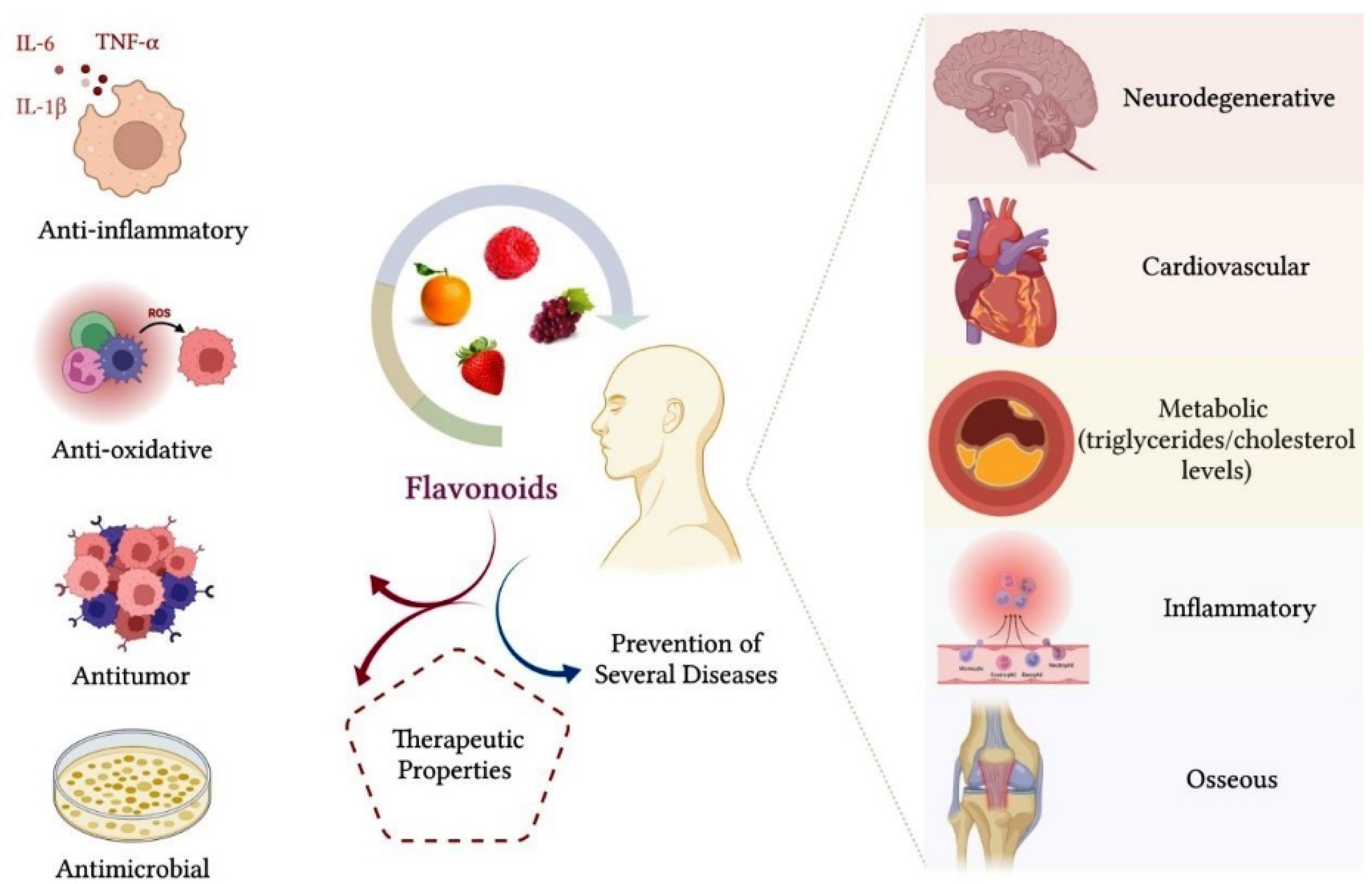 Figure 3. Flavonoids have an important therapeutic effect on the organism. The main benefits that flavonoids provide for health are related to their anti-inflammatory, antioxidant, antitumor and antimicrobial properties. Consumption of a diet containing flavonoids can also favor a reduction in triglycerides and cholesterol plasma levels, in addition to contributing to the prevention of neurodegenerative, cardiovascular, metabolic, inflammatory and bone diseases, such as osteoarthritis and osteoporosis.
The benefits of flavonoid intake also extend to bone tissue health. Some flavonoids, such as isoflavones, are particularly classified as phytoestrogens because they are able to bind to estrogen receptors and have a similar action to that of this hormone, favoring bone anabolism [16]. Due to their anti-inflammatory, antioxidant and antiapoptotic properties, flavonoids have a beneficial effect on bone cell metabolism, contributing to the prevention of bone diseases, such as osteoarthritis and osteoporosis [44]. In bone, the inhibitory effect of flavonoids on oxidative stress and the inflammatory process favors the survival of osteoblasts and modulates osteoclastic differentiation.
Flavonoids have an important anti-inflammatory potential, which is crucial to minimizing tissue damage. In general, flavonoids act by inhibiting the synthesis of important inflammatory mediators, such as TNF-α, IL-1, IL-6 and IL-7, which is extremely beneficial, considering that these cytokines stimulate osteoclastic activity. It is also reported that flavonoids exert a regulatory effect on osteoclastic activity by inhibiting the expression of markers involved in bone resorption, such as RANKL and proteolytic enzymes, including MMPs, cathepsin-K and tartrate-resistant acid phosphatase (TRAP) [12][44]. Additionally, there is evidence in the literature that flavonoids stimulate the expression of osteogenic markers related to osteoblastic differentiation and bone matrix mineralization, such as Runx2, ALP, OCN, type 1 collagen (COL-1), osteopontin (OPN) and morphogenetic protein-2 (BMP-2) [13][16][44]. Flavonoids can also stimulate osteogenic differentiation of MSCs and preosteoblastic cells through the activation of important pathways, such as Smad1/5/8 and Wnt/β-catenin signaling pathways [13][16][44]. Through these mechanisms of action, flavonoids may favor bone formation and increase bone mineral density [13].

More
© Text is available under the terms and conditions of the Creative Commons Attribution (CC BY) license; additional terms may apply. By using this site, you agree to the Terms and Conditions and Privacy Policy.
Upload a video for this entry
Information
Subjects: Orthopedics
Contributors MDPI registered users' name will be linked to their SciProfiles pages. To register with us, please refer to https://encyclopedia.pub/register :
Rogerio Leone Buchaim
,
Adriana de Cássia Ortiz
,
Simone Ortiz Moura Fideles
,
Daniela Vieira Buchaim
View Times: 687
Revisions: 2 times (View History)
Update Date: 11 May 2022
Table of Contents
1000/1000
Hot Most Recent