+1 point
Thank you for your contribution! You can also upload a video entry related to this topic through the link below: https://encyclopedia.pub/user/video_add?id=22555
Check Note
2000/2000
Transient Receptor Potential Ankyrin 1

The transient receptor potential ankyrin 1 (TRPA1), a member of the TRP superfamily of channels, is primarily localized in a subpopulation of primary sensory neurons of the trigeminal, vagal, and dorsal root ganglia, where its activation mediates neurogenic inflammatory responses. TRPA1 expression in resident tissue cells, inflammatory, and immune cells, through the indirect modulation of a large series of intracellular pathways, orchestrates a range of cellular processes, such as cytokine production, cell differentiation, and cytotoxicity.

The transient receptor potential (TRP) family of channels includes non-selective cation channels that are represented by 28 different members grouped in 6 subfamilies, namely: canonical (TRPC), vanilloid (TRPV), melastatin (TRPM), mucolipin (TRPML), polycystin (TRPP), and ankyrin (TRPA). TRP channels are activated by highly heterogenous, exogenous, and endogenous stimuli, such as changes in temperature and pH, reactive oxygen species (ROS), osmotic stress, and bacterial toxins or chemical compounds [1]. Their activation is essential in several sensory transduction pathways [2], homeostatic functions [3], and physiological and pathophysiological processes [1][3]. Given their expression in sensory neurons, some TRP channels have been associated with the detection and signaling of painful stimuli.

The ankyrin-like protein with transmembrane domains (ANKTD), initially identified in lung fibroblasts [4], has been successively included in the TRP superfamily (renamed TRPA1, A standing for ankyrin) for its strong homology with several components of the superfamily. In humans, the trpa1 gene consists of 27 exons and spans 55,701 base pairs of the human chromosome 8q13 [5][6]. Like all TRP channels, TRPA1 has six transmembrane domains (S1–S6) with a pore region between S5 and S6 and cytoplasmic N- and C-terminals associated with homo-tetramers. The peculiarity of TRPA1 is an unusually elongated (14–18) ankyrin repeat domain within the N-terminal, which connects with transmembrane proteins to the cytoskeleton and is involved in protein–protein interactions, as well as in channel trafficking to the plasma membrane (Figure 1). 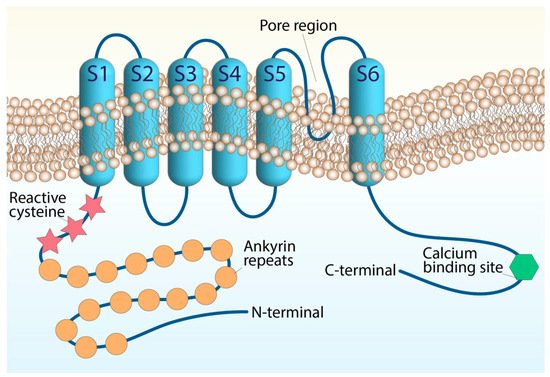 Figure 1. Structure of the TRPA1 channel. The TRPA1 architecture containing six transmembrane domains and intracellular N- and C-terminals. The transmembrane S5–S6 forming the central pore and selectivity filter. The reactive cysteine residues are within the N-terminal domain, along with the N-terminal ankyrin repeats, and the calcium-binding region is within the C-terminal.
N-terminal cysteine residues represent important functional sites of the channel. The cysteine residues allow channel activation by endogenous mediators, such as oxidative stress byproducts and exogenous electrophiles, through their oxidative modification [6][7][8][9][10][11][12]. However, TRPA1 possesses additional domains that appear to be crucial for its function. A putative EF-hand motif has been identified in the N-terminal region and represents the most common mechanism for many Ca2+-interacting proteins. Intracellular Ca2+ ions potentiate agonist-induced responses and directly activate the channel, probably through this mechanism [13][14], although its functional relevance is still being debated. TRPA1 channel activity undergoes modulation by negatively charged ligands, including phosphoinositides or inorganic polyphosphates [15], interacting with a yet-unidentified positively charged domain in the C-terminal region. Basic residues in the C-terminal, strongly involved in TRPA1 voltage and chemical sensitivity, may represent the possible interaction sites for negatively charged molecules generally considered to modulate TRPA1 [15]. TRPA1 subunits can assemble into hetero-tetrameric complexes with TRPV1 to adapt to the single-channel biophysical properties in native sensory neurons [1][16].
TRPA1 is widely distributed in neural (primary sensory neurons) [17] and non-neural tissues, including mouse inner ear and the organ of Corti [18], rat vascular endothelial cells [19], enterochromaffin cells [20], cells of the respiratory tract [21][22][23], human keratinocytes, melanocytes, synoviocytes, and gingival fibroblasts [24]. The TRPA1 receptor can also be found in epithelial cells, mast cells, and pancreatic β cells [25][26][27][28][29][30][31]. More recent studies have reported the presence of TRPA1 in glial cells, such as astrocytes [32], oligodendrocytes [33][34], and Schwann cells [35][36], where it contributes to different regulatory and proinflammatory pathways [37][38][39] (Figure 2). 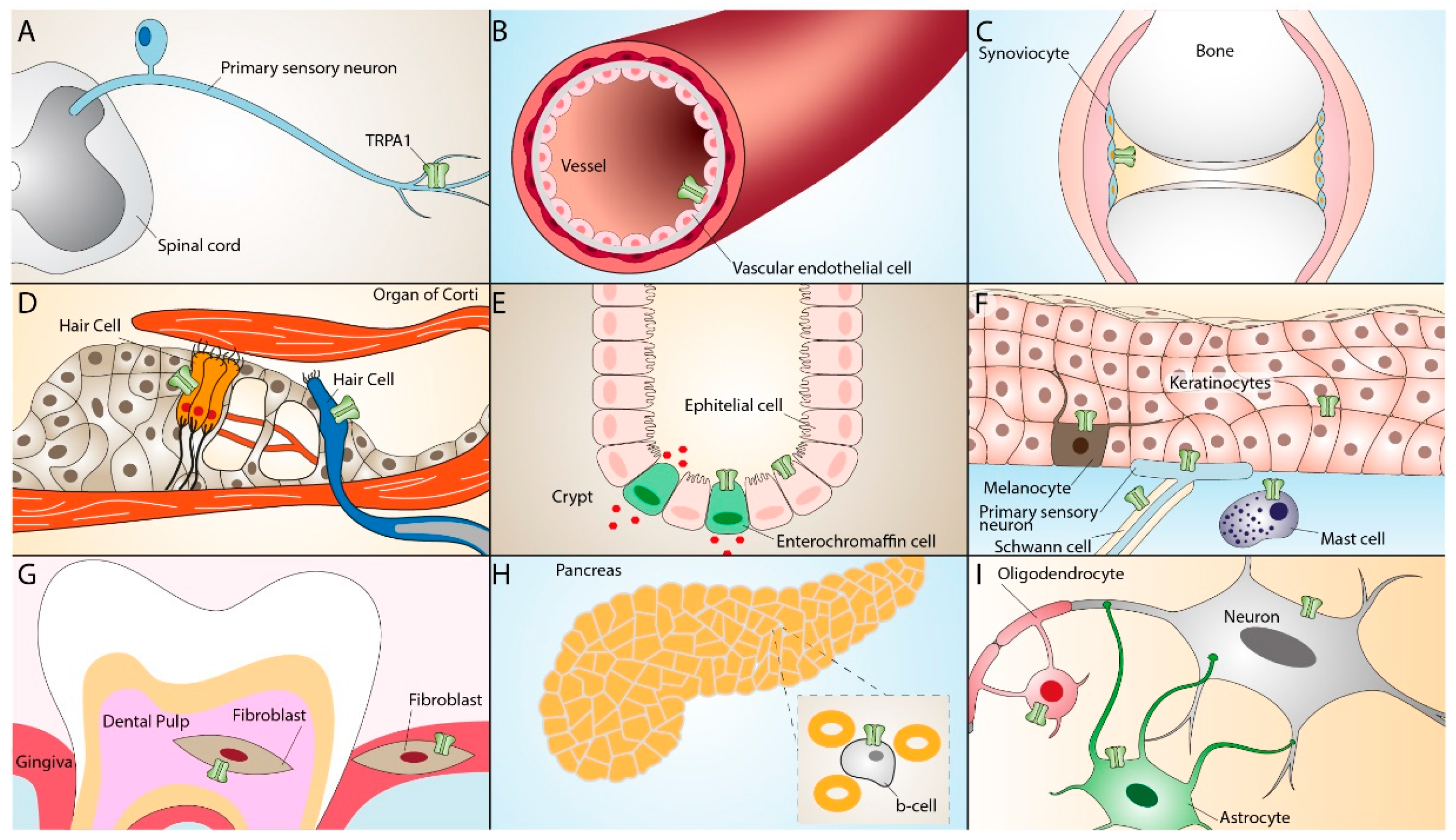 Figure 2. TRPA1 expression in neuronal and non-neuronal tissues. TRPA1 expression in primary sensory neurons (A), vascular endothelial cells (B), synoviocytes (C), inner ear hair cells (D), enterochromaffin cells, epithelial cells (E), keratinocytes, melanocytes, Schwann cells, mast cells (F), dental pulp and gingiva fibroblasts (G), pancreatic β-cells (H), oligodendrocytes, and astrocytes (I).
Worthy of note, TRPA1 is activated by a wide variety of exogenous irritants that cause pain and inflammation [17]. The channel is also targeted by endogenous inflammatory agents, such as ROS, 4-hydroxynonenal (4-HNE) and 4-oxononenal (4-ONE) [11], and reactive nitrogen species (RNS) that can produce nitrated fatty acids, such as nitrooleic acid [40]. Prostaglandins are important fatty acid derivatives that are produced locally at sites of inflammation and tissue injury [41]. Some arachidonic acid derivatives, such as cyclopentenone prostaglandins, have been proposed to directly activate TRPA1 [42][43]. The prominent role of TRPA1 in inflammation is also underlined by its presence in a subset of peptidergic primary afferents. TRPA1 activation on these neurons promotes the release of the vasoactive and proinflammatory neuropeptides, substance P (SP), and calcitonin gene-related peptide (CGRP) [10] from central and peripheral terminals, thus promoting neurogenic inflammation [11][44]. CGRP release is considered a critical factor in the genesis of migraine pain [45][46]. TRPA1 ability to stimulate CGRP release from trigeminal terminals and the ensuing neurogenic inflammation in migraine has been proposed and discussed in previous papers [47][48] and will not be the object of the present content.
Given its expression and function in many different types of tissues and cells, TRPA1 operates as a sensor of cell stress, tissue injury, and exogenous noxious stimuli, and its activation leads to defensive responses. However, under circumstances of aberrant regulation, TRPA1 may exacerbate tissue inflammation and its consequences. Here summarize the recently discovered functional properties of TRPA1 in its beneficial/detrimental roles in several inflammatory disorders.