Submitted Successfully!
Thank you for your contribution! You can also upload a video entry related to this topic through the link below:
https://encyclopedia.pub/user/video_add?id=2251
Check Note
2000/2000
Pediatric Obesity and Inflammation
Edit
Upload a video
This entry is adapted from 10.3390/biom10091324

Obesity is a growing health problem in both children and adults, impairing physical and psychological state and impacting health care system costs. It is well-known that individuals with excessive weight gain frequently develop obesity-related complications, which are mainly known as Non-Communicable Diseases (NCDs), proven to be associated with chronic inflammation, causing disability and reduced life expectancy. Complications related to inflammation in pediatric obesity are discussed here.

Obesity is a growing health problem in both children and adults, not only impacting people’s physical and mental health but also the economy of most societies.

According to the World Health Organization (WHO), overweight and obesity in children under 5 years of age are defined as weight-for-height 2 and 3 standard deviations (SD), respectively, above the WHO Child Growth Standards reference median; for children aged 5–19 years, overweight and obesity are defined as BMI-for-age 1 SD and 2 SD, respectively, above the WHO Growth Standards reference median [1].

In 2016, the WHO stated that nearly 41 million children below the age of 5 and over 340 million children and adolescents between 5 and 19 years of age were either overweight or affected by obesity. The WHO estimated that 25–70% and 5–30% of the European population were overweight or obese, respectively [2]. The prevalence of obesity among adults in the United States of America is around 33.8% for males and 35.5% for females, while the prevalence of overweight and obesity in children between 2 and 12 years of age is around 16%, and in adolescents is 17.6% [3].

Prevention of childhood obesity is critical to preventing complications in adolescence, early adulthood and adulthood [4]. Indeed, it is well-known that individuals with obesity are likely to develop related complications, including cardiovascular disease, type 2 diabetes mellitus (T2DM), metabolic syndrome, non-alcoholic fatty liver disease (NAFLD), hypertension, hyperlipidemia and other conditions associated with chronic inflammation, which cause disability and shorten life span [5].

Some studies have evaluated the effects of pediatric obesity and its complications may have on life span, predicting a shorter life expectancy [7]. The chronic inflammatory status associated with obesity plays a crucial role in the development of complications. Recent evidence demonstrates that the initiating events in obesity-induced inflammation start early in childhood [8].

Children affected by overweight or obesity are hyperinsulinemic and have approximately 40% less insulin-stimulated glucose compared with normal-weight children. The development of T2DM is closely related to the insulin resistance value [4][5][9][10]. Glucose homeostasis depends on the equilibrium between insulin secretion by the pancreatic cells and insulin activity. The evolution of impaired glucose tolerance in subjects with obesity is connected to the worsening of insulin resistance and is an intermediate stage in the natural progression to T2DM. During childhood, especially the pubertal period, there is a normal increase in insulin resistance, resulting in hyperinsulinemia, which can then normalize due to the changes at the end of puberty. Subjects with T2DM show impaired insulin activity along with insulin secretory defect. As described in detail previously, the enlarging adipose tissue in obese subjects synthesizes and secretes hormones and proteins like leptin, adiponectin and TNF-α, which modify insulin secretion and sensitivity, causing insulin resistance [11].

TNF-α and IL-6 can alter insulin sensitivity and stimulate the phosphorylation of serine residues instead of tyrosine in insulin receptor substrate-1 (IRS-1), thus inhibiting the activation of insulin signalling and sustaining insulin resistance. Therefore, it appears that such conditions lead to a vicious cycle, as hyperglycemia also induces IL-6 (pro-inflammatory cytokine) production from endothelium and macrophages. Furthermore, it intensifies the activity of the suppressors of cytokine signalling (SOCS) proteins, impairing insulin release and intracellular signalling pathways [10].

Studies have shown that the atherosclerotic mechanism begins in childhood [12].  As with adults, children with obesity have raised blood pressure values. Rosner et al. [13] showed that the odds ratio of hypertension associated with overweight ranges from 2.5 to 3.7 in children and adolescents.

The presence of atherosclerotic lesions in both the aorta and coronary arteries has been found to closely relate to obesity and overweight in pediatric subjects. Moreover, being overweight during childhood is a strong predictor of coronary calcium in adulthood [12][14][15]. At present, cardiovascular disease is perceived as a chronic inflammatory state of the vessel wall that results from the transcytosis of atherogenic apolipoproteins-B VLDL (Very Low Density Lipoprotein), IDL (Intermediate Density Lipoprotein) and LDL (Low-density lipoproteins) from the plasma to the inner layer of the vessel (intima). These lipoproteins are retained in the subendothelial space, leading to the infiltration of macrophages and to T cells interacting with each other and with the cells of the arterial wall. It is conceivable that inflammation induced by obesity accelerates the atherosclerosis pathway [16].

As regards HDL cholesterol, apolipoprotein A1, one of the most important constituents of the HDL molecule, interacts with the ATP-binding protein-1 promoting cholesterol efflux from macrophages to the liver, which is one of the main functions of HDL [12][14]. Despite this prevalent function, recent studies have highlighted the complex role of the HDL particle in the inflammatory process. HDL prevents the release of TNF-α and IL-1β from activated monocytes. During the acute-phase cascade, HDL molecules act as proinflammatory cells and promote the activation and migration of monocytes induced by LDL [12][14].

It has been underlined that some of the most important CVD risk factors like hypertension and hyperglycemia promote harmful stimulation for the production of leukocyte adhesion molecules, which then triggers an inflammatory response involved in the mechanism of atherosclerotic plaque formation and expansion.

Monocytes recruited within the arterial intima differentiate into macrophages, bury low-density oxidized lipoproteins, and become laden with lipids. Continuous systemic inflammation contributes to this process with neutrophils infiltrating the plaque and releasing reactive oxygen species (ROS) and eventually contributing to the growing atheroma.

Even though atherosclerosis rarely evolves to a critical point before adulthood, the process surely begins during childhood along with the increase in fatty streaks and thickening of the arterial media.

2.3 Pulmonary System
Obesity is both a major risk factor and a disease modifier of asthma in children. Asthma and obesity in children are both characterized by chronic tissue inflammation [17]. As regards the immune pathway, TH-2 response inflammation is known to be complicated by obesity. The obese state also alters CD4 cells toward TH1 polarization, which is associated with worse
asthma severity and control, along with abnormal lung function. TH17 pathways and innate lymphoid cells (ILCs) have also been implicated. Finally, in relation to eosinophilic airway inflammation, sputum eosinophil count and exhaled Nitric Oxide (NO) levels might underestimate the degree of type 2 inflammation in patients with obesity. Changes in their function in obese adipose tissue could contribute to both obesity and asthma [[18][19].

2.4 Hepatobiliary System
Obesity-associated hepatobiliary diseases include non-alcoholic fatty liver disease (NAFLD) and gallbladder diseases. One of the consequences of this increase in the synthesis of free fatty acids (FFAs) is the production of Malonil-CoA, which inhibits carnitine palmitoyltransferase-1 (CPT-1), the protein that transports FFAs within mitochondria. Concurrently, hyperinsulinemia lowers the synthesis of apolipoprotein B-100, which mobilizes triglycerides for assembly into VLDL, diminishing the triglyceride export. These modifications determine various histological patterns, ranging from simple steatosis to Non-Alcoholic Steatohepatitis (NASH), defined by necrotic inflammation and fibrogenesis caused by an increase in the production of ROS, which causes lipid peroxidation (oxidative degradation of lipids) and the consequent production of pro-inflammatory cytokines (TNF- , TGF- , IL-8); This situation could worsen, evolving to cirrhosis or hepatocellular carcinoma.

Obesity becomes a risk factor beyond age 12, which may reflect the effect of pubertal status on the pathophysiology of primary idiopathic intracranial hypertension (IIH), defined by increased intracranial pressure without an intracranial pathology, and normal cerebrospinal fluid in the absence of an identifiable underlying systemic cause. The mechanisms by which obesity predisposes children to IIH have not been fully elucidated, however, the link between obesity and this condition is most likely to be in the di erent substances, from pro-inflammatory cytokines to leptin, secreted by the adipose tissue [20]. It is plausible that IIH, which is characterized by obesity, abnormal inflammatory response and obesity-related cytokine production may drive 11 β-HSD1 activity. Consequently, increased 11 β-HSD1 concentration in subjects with IIH may enhance cortisol levels at the choroid plexus and arachnoid granulation leading to altered CSF production and drainage, thus contributing to the elevated intracranial pressure [21].

Obesity is associated with systemic low-grade inflammation in both children and adults, which has been acknowledged as one of the major drivers of chronic degenerative diseases [5][22]（Figure 1).

Research shows that unbalanced dietary patterns such as the Western diet, high in simple sugars, refined carbohydrates, saturated and trans-fatty acids, lead to chronic inflammatory responses, increased adipose depot, and thus future comorbidities frequently associated with overweight and obesity [23]. Furthermore, some nutrients have distinctive effects on inflammatory response and metabolic impairment or restoration, which are likely to be mediated by nutrients that can either help release inflammatory messengers or fight against oxidative stress. 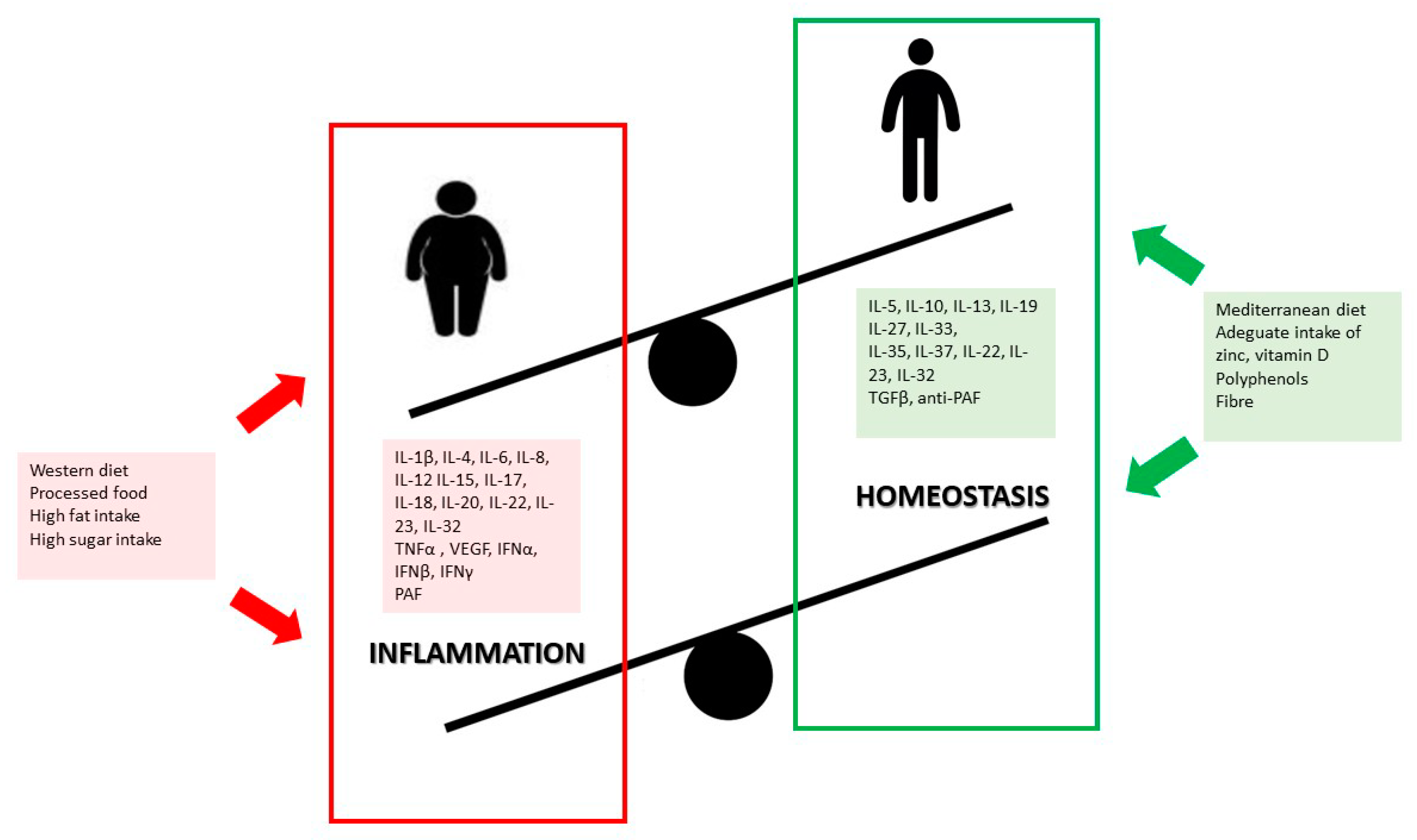 The detrimental effects of obesity on health, and the costs on health care systems, clearly dictate the need to provide nutritional interventions for preventing and treating obesity in childhood, which are known to yield positive results.

Therefore, appropriate early dietary interventions for the management of pediatric overweight and obesity are challenging but necessary, and it is advisable to start as early as possible for overall healthy growth, and prevention of comorbidities in adulthood.

More
© Text is available under the terms and conditions of the Creative Commons Attribution (CC BY) license; additional terms may apply. By using this site, you agree to the Terms and Conditions and Privacy Policy.
Upload a video for this entry
Information
Subjects: Nutrition & Dietetics ; Pediatrics
Contributor MDPI registered users' name will be linked to their SciProfiles pages. To register with us, please refer to https://encyclopedia.pub/register :
DEBORA PORRI
View Times: 241
Revisions: 3 times (View History)
Update Time: 27 Oct 2020
Table of Contents
1000/1000
Hot Most Recent