+1 point
Thank you for your contribution! You can also upload a video entry related to this topic through the link below: https://encyclopedia.pub/user/video_add?id=22338
Check Note
2000/2000
Viral Transmissibility of SARS-CoV-2

The emergence of coronavirus disease 2019 (COVID-19), caused by the novel coronavirus severe acute respiratory syndrome coronavirus 2 (SARS-CoV-2), has led to a global health calamity unprecedented in the modern world. The disease spread worldwide, and to date, there have been over 230 million confirmed cases of COVID-19, including approximately 4.7 million deaths. Mutant variants of the virus have raised concerns about additional pandemic waves and threaten to reverse our progress thus far to limit the spread of the virus.

The emergence of the coronavirus disease 2019 (COVID-19), caused by the novel coronavirus severe acute respiratory syndrome coronavirus 2 (SARS-CoV-2), has led to a global health calamity that is unprecedented in the modern world. Part of the Genus ‘Coronaviruses’ belonging to the family ‘Coronaviridae’, SARS-CoV-2 is the third virus of its kind responsible for an outbreak (albeit with greater global impact), succeeding SARS-CoV in 2003 and MERS-CoV (the Middle East Respiratory Syndrome Coronavirus) in 2012–2015 and 2020 [1]. COVID-19 emerged as novel pneumonia in Wuhan, Hubei Province, China, in December 2019 and is believed to have originated via zoonotic transmission. The disease quickly spread worldwide, prompting the World Health Organization (WHO) to declare the outbreak a pandemic on 11 March 2020. To date, there have been over 230 million confirmed cases of COVID-19, including approximately 4.7 million deaths [2]. The pandemic has also disrupted the global economic landscape due to widespread lockdowns, leading to loss of income for individuals and precipitating staggering negative trends in global stock markets [3].

The primary mode of transmission of SARS-CoV-2 is human-to-human via respiratory droplets produced during exhalation, as shown in Figure 1 [4][5][6]. However, there is also evidence that suggests the virus is transmissible via viral aerosol particles produced by individuals with COVID-19 disease [7][8][9]. In order to assist in the development of prevention guidelines, a group from the Nebraska Medical Center further investigated the transmission routes of the virus. Their studies reveal that viral RNA is present in nearly two-thirds of the air samples from rooms housing COVID-19 patients [9]. However, there is insufficient evidence at this time that would suggest that these particles indicate a viable virus that could be transmitted [9]. While the transmissibility of the virus via inanimate surfaces is generally low [10][11], aerosol to surface studies reveal that SARS-CoV-2 is more stable on plastic and stainless steel surfaces, showing a presence for up to several days, Figure 1 [12]. 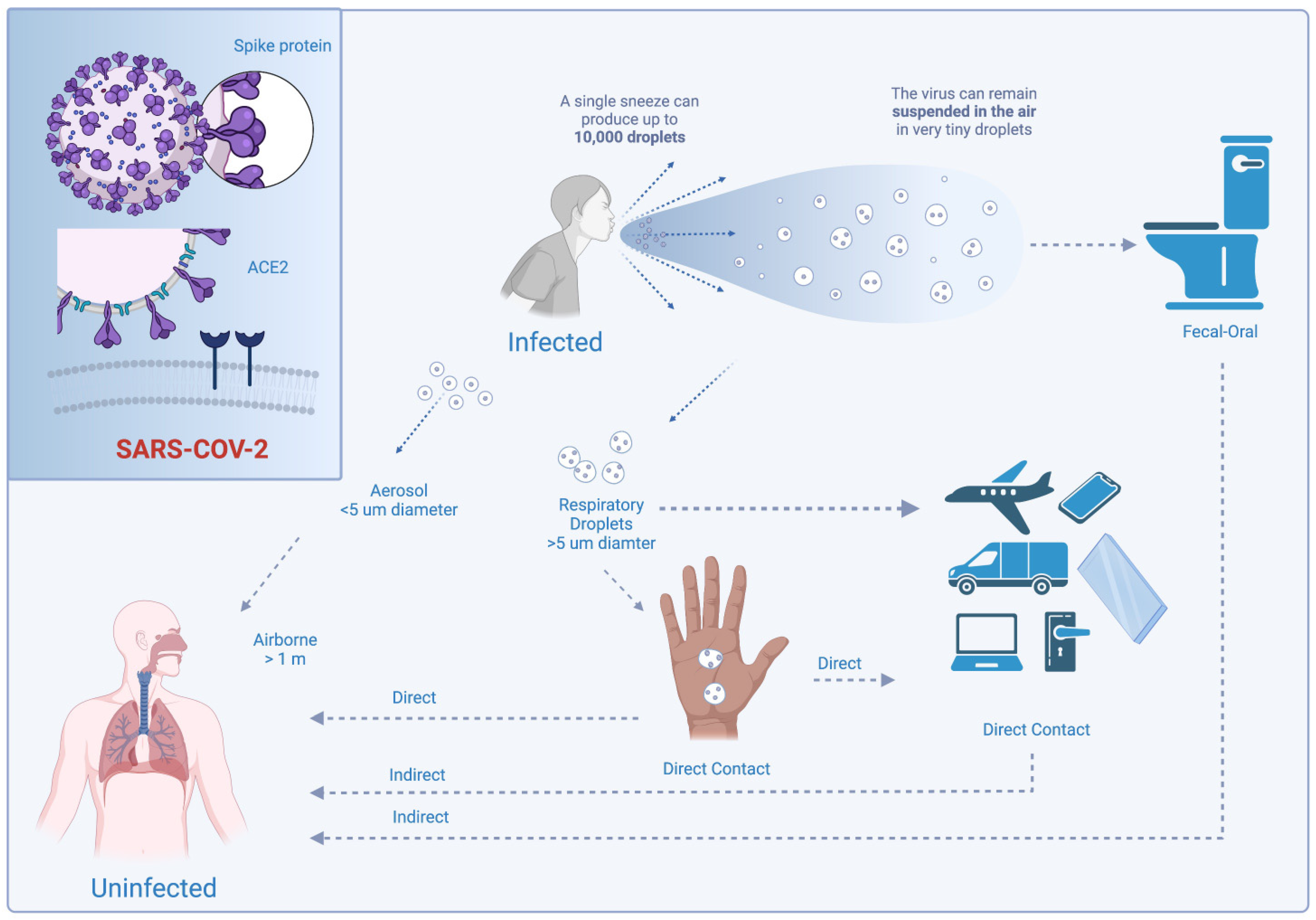 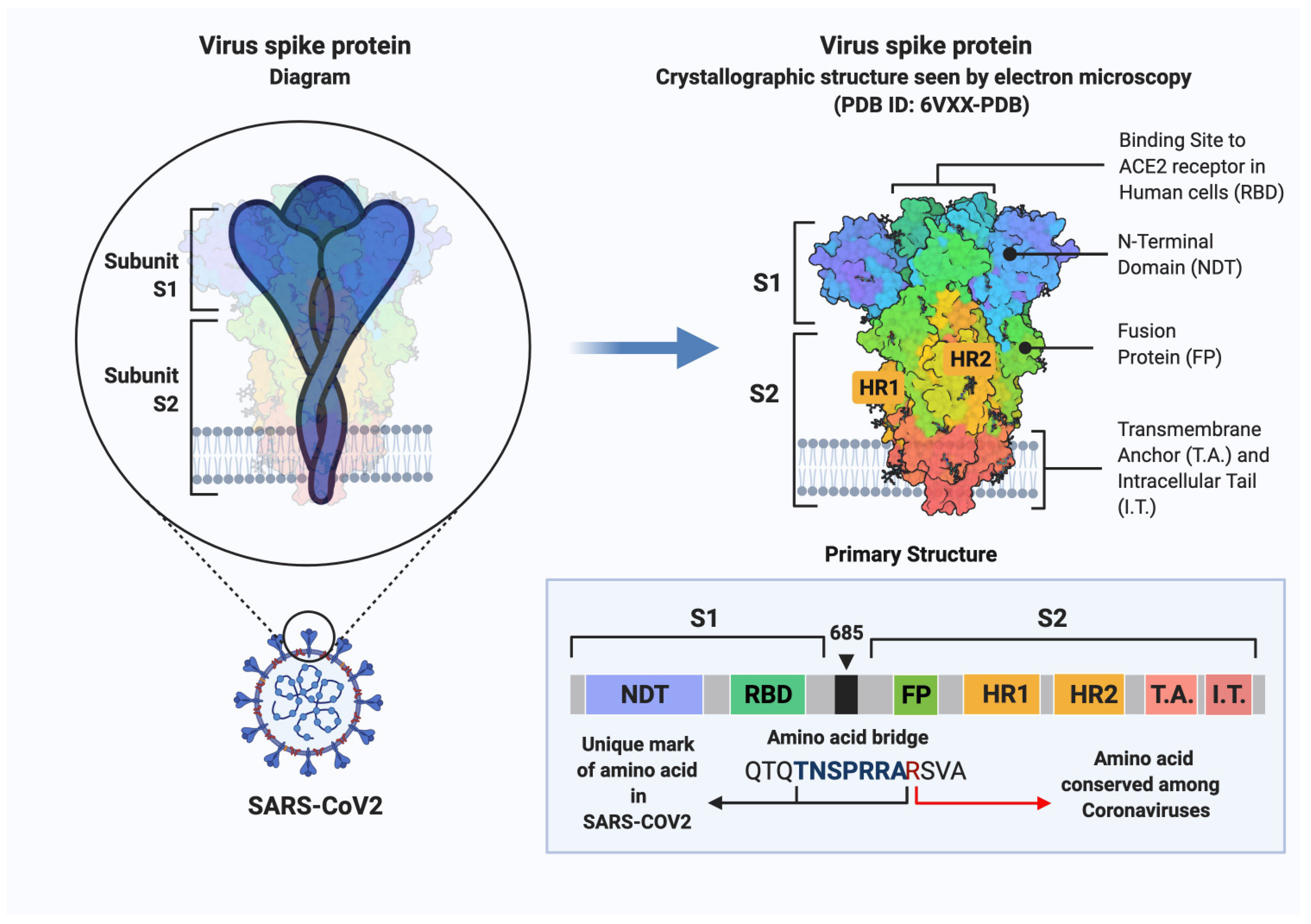 Figure 2. Schematic representation of SARS-CoV-2 spike protein primary structure. Domains are depicted with different colors. NTE, N-terminal domain; RBD, receptor-binding domain; FP, fusion peptide; HR1, heptad repeat 1; HR2, heptad repeat 2; TM, transmembrane domain; IT, intracellular tail. Created with BioRender.com.
Moreover, the SARS-CoV-2 S protein can trigger cellular entry independent of proteases but dependent on receptor binding, leading to augmented viral spread [46]. However, when the S1/S2 site is damaged, it can severely inhibit the S protein cleavage and proteolytic processing [47]. Moreover, structural studies suggest that the addition of basic residues to the S1/S2 site of SARS-CoV-2 exhibits an increased viral spread via cell–cell fusion but no change to virus–cell fusion [47]. In sum, the structural studies stress the importance of recognizing which viral mutants lead to inhibition or augmentation of viral spread to develop effective therapeutic strategies against SARS-CoV-2 and its variants.
For viral spread to occur, the S protein of SARS-CoV-2 must first be activated. This process starts when the receptor-binding domain (RBD) of the S1 subunit binds to the host cell surface receptor angiotensin-converting enzyme-2 (ACE2) [44][46][47][50] via its peptidase domain [51][52]. Compared to SARS-CoV, the receptor binding capacity of SARS-CoV-2 to ACE2 is at least 10-fold higher [44][49]. This high affinity is partially due to the specialized RBD of SARS-CoV-2, which contains a residue motif at 482–485 (Gly-Val-Glu-Gly) that allows for better contact with ACE2 and two key residues (Gln493 and Leu455) that stabilize ACE2 binding [46][53]. Interestingly, the data reveals that this high-affinity results in increased virulence of SARS-CoV-2 [4][48][49]. Once SARS-CoV-2 and ACE2 bind together, it alters the conformation of the S protein, exposing a cleavage site on the S2 subunit, which the host cell proteases will act upon in the next step [46][54]. Then, the host cell proteases, such as transmembrane protease serine S1 member 2 (TMPRSS2), carry out proteolysis of the S protein at the cleavage site between the S1/S2 boundary, resulting in a new S2 site (S2′) [46][55][56]. Following the S2′ cleavage and the release of the S2 subunit, the activation of the protein concludes, allowing for the subsequent initiation of the endocytosis of the virus through the fusion of the viral and cell membranes [46][54][55][56].

More
© Text is available under the terms and conditions of the Creative Commons Attribution (CC BY) license; additional terms may apply. By using this site, you agree to the Terms and Conditions and Privacy Policy.
Upload a video for this entry
Information
Subjects: Virology
Contributors MDPI registered users' name will be linked to their SciProfiles pages. To register with us, please refer to https://encyclopedia.pub/register :
Deena Fayyad
,
Jessica L Kelts
,
Tristan Nielson
,
Besa Xhabija
View Times: 144
Entry Collection: COVID-19
Revisions: 2 times (View History)
Update Date: 27 Apr 2022
Table of Contents
1000/1000
Hot Most Recent