+1 point
Thank you for your contribution! You can also upload a video entry related to this topic through the link below: https://encyclopedia.pub/user/video_add?id=22105
Check Note
2000/2000
Anti-Inflammatory and Antiviral Effects of Cannabinoids

The COVID-19 pandemic caused by the SARS-CoV-2 virus made it necessary to search for new options for both causal treatment and mitigation of its symptoms. Scientists and researchers around the world are constantly looking for the best therapeutic options. These difficult circumstances have also spurred the re-examination of the potential of natural substances contained in Cannabis sativa L. Cannabinoids, apart from CB1 and CB2 receptors, may act multifacetedly through a number of other receptors, such as the GPR55, TRPV1, PPARs, 5-HT1A, adenosine and glycine receptors. The complex anti-inflammatory and antiviral effects of cannabinoids have been confirmed by interactions with various signaling pathways. Considering the fact that the SARS-CoV-2 virus causes excessive immune response and triggers an inflammatory cascade, and that cannabinoids have the ability to regulate these processes, it can be assumed that they have potential to be used in the treatment of COVID-19.

The endocannabinoid system (ECS) is composed of two key receptors, named cannabinoid type 1 (CB1) and cannabinoid type 2 (CB2), endogenous cannabinoids binding the receptors, such as anandamide (AEA) and 2-arachidonoylglycerol (2-AG), together with the enzymes responsible for their synthesis and degeneration, such as fatty acid amide hydrolase (FAAH) for AEA and monoacylglycerol lipase (MAGL) for 2-AG [1][2][3]. The CB1 receptor is one of the G protein-coupled receptors located mainly in the central nervous system (CNS)—particularly abundantly in the neocortex, hippocampus, basal ganglia, cerebellum and brainstem [4]. It can also be found in peripheral organs, such as the liver, muscles and pancreas, and in adipose tissue, where it regulates food intake, energy expenditure and reward-related responses [1]. The CB2 receptor is highly expressed in immune cells, such as lymphocytes B, lymphocytes CD8, NK cells, monocytes, lymphocytes CD4 and neutrophils [5][6]. CB2 receptors present an anti-inflammatory effect by reducing the release of proinflammatory cytokines, increasing production of anti-inflammatory cytokines, inhibiting macrophage migration and regulating lymphocyte T activation [5].
Apart from binding to CB1 and CB2 receptors, cannabinoids alternatively affect numerous other receptors, such as G protein-coupled receptor 55 (GPR55), transient receptor potential vanilloid channels (TRPV) and a class of peroxisome proliferator-activated receptors (PPARs) [3][7]. Moreover, they exhibit affinity to the serotonin 1A receptor (5-HT1A), as well as adenosine and glycine receptors [7]. Multifaceted paths of action of cannabinoids involve their anti-inflammatory and antioxidative effects, together with the capacity to modulate immunological processes (Figure 1). 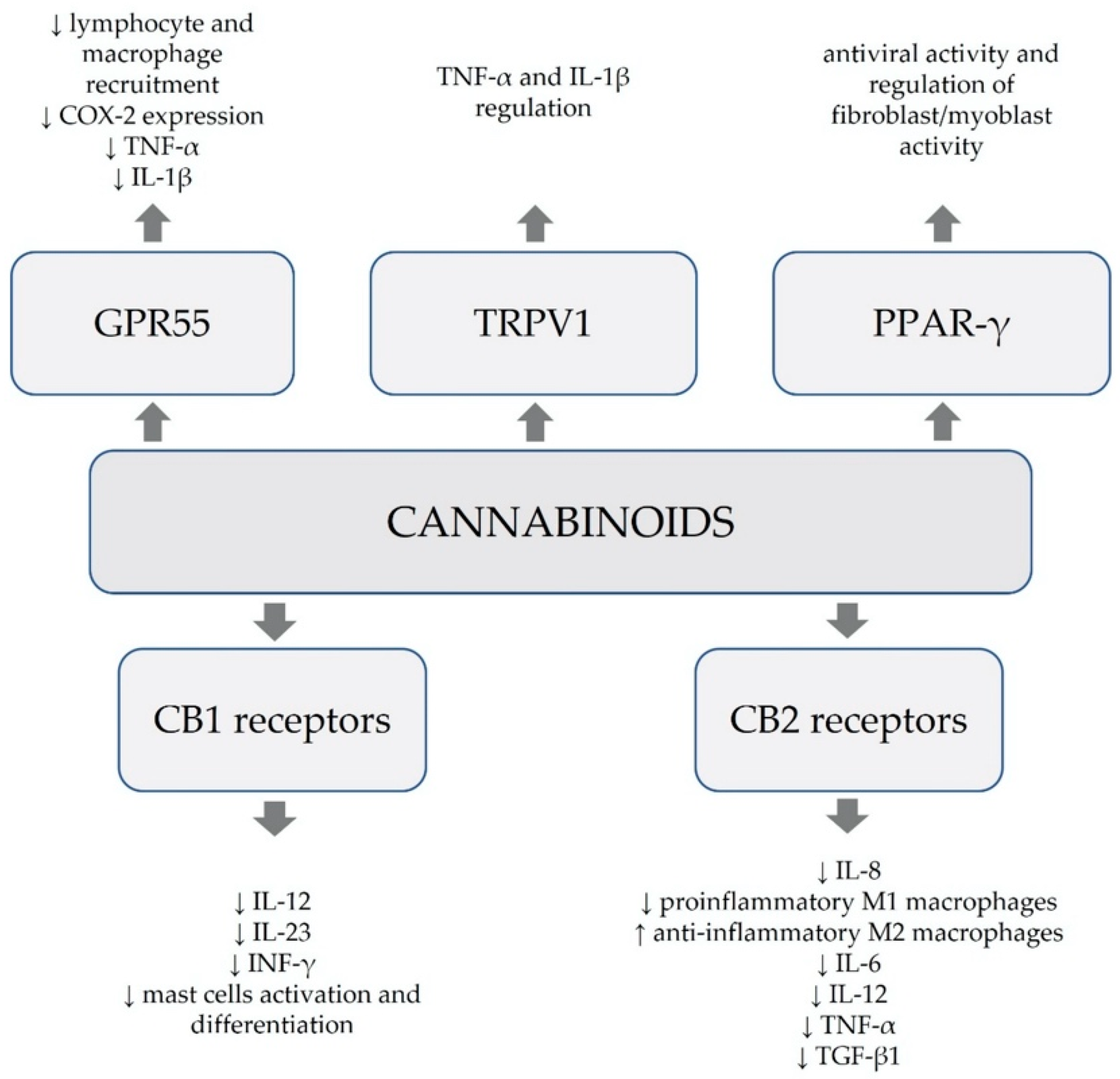 Figure 1. Anti-inflammatory, immunological and antioxidative modes of action of cannabinoids [3].
Endocannabinoid receptors are also activated by exogenous substances, known as phytocannabinoids—extracted from Cannabis sativa L., and other synthetic compounds [8]. Cannabis sativa L. is rich in over 100 discovered phytocannabinoids. The key two include Δ9-tetrahydrocannabinol (THC), a compound with psychoactive properties due to its strong affinity to CB1 receptors, and cannabidiol (CBD), which is considered non-psychotropic [8]. Other compounds of Cannabis sativa L. include cannabigerol (CBG), cannabichromene (CBC), tetrahydrocannabivarin (THCV), cannabicitran (CBT) and many others [8][9]. Moreover, the extract contains non-psychoactive essential oils (terpenes), which exhibit synergism in interactions with cannabinoids and enhance their medicinal functionality, which is known as the entourage effect [10].
THC binds primarily to CB1 receptors due to its lipophilic character and the ability to penetrate the blood–brain barrier, though there is a weak binding of CB2 receptors as well [11][12]. CBD has a low affinity to CB1 and CB2 receptors [13]. It is also a partial agonist of serotonin 5-HT1A receptor, TRPV1 receptor, an allosteric modulator of δ and μ opioid receptors, as well as PPAR-γ agonist and intracellular calcium release modulator [13][14]. As aforementioned, CBD does not have psychoactive properties, although the affinity to various receptors and signalling paths confirmed its anti-inflammatory and antioxidant effects [3]. Numerous diseases, such as anorexia, chronic pain, inflammation, multiple sclerosis, neurodegenerative disorders, epilepsy, cardiovascular disorders, cancers and metabolic syndrome-related disorders, to name just a few, are treated or have strong potential to be treated by cannabinoids or cannabinoid-related compounds [15].
The COVID-19 pandemic is caused by severe acute respiratory syndrome coronavirus 2 (SARS-CoV-2) [16][17]. The symptoms of COVID-19 can be divided into basic categories, such as flu-like symptoms (fever, fatigue, muscle aches, headaches), respiratory symptoms (cough, shortness of breath) and gastrointestinal symptoms (diarrhoea, nausea). Frequently patients experience anosmia and ageusia, which mean the loss of smell and taste, respectively, suggesting the neuroinvasive potential of the virus [16][17].

SARS-CoV-2 is an RNA virus composed of a lipid bilayer and four structural proteins. The virus membrane consists of three integral proteins—the spike (S), the membrane (M) and the envelope (E) [18]. SARS-CoV-2 enters human cells by binding the S protein to the angiotensin converting enzyme 2 (ACE2) receptor, which is mainly expressed in lung tissue, as well as the oral and nasal mucosa, kidneys, testes and the gastrointestinal tract [17].
Excessive expression of ACE2 receptors is correlated to cytokine secretion and inflammatory response in COVID-19 patients [19]. The binding of the S protein and the ACE2 receptor leads to proteolysis of the S protein by transmembrane serine protease 2 (TMPRSS2) into two bound peptides—S1 and S2—which facilitate the viral entry into the cell by both binding to the ACE2 receptor and mediating membrane fusion [18]. In the host cell, the viral genome undergoes translation into two polypeptides, which later become cleaved by SARS-CoV-2 proteases—main (Mpro) and papain-like (PLpro). The proteins produced by this process facilitate viral replication and enable the virus to spread inside the host organism [18].
The primary aim of the treatment used in COVID-19, in addition to reducing inflammation and symptoms associated with the excessive activation of the immune system, is to stop the virus from replicating in the organism. Natural compounds are promising targets for drug development, and a number of therapies have been inspired and based on natural products [20]. Molecular docking analysis revealed strong binding affinities between the phytocannabinoids and codon mRNAs of proteins implicated in replication, translation and release of SARS-CoV-2, which portrays cannabinoids as potential drugs against COVID-19 [21]. Moreover, inhibition of the main protease among coronaviruses—Mpro, which plays a significant role in the COVID-19 virus replication process—is also considered a potential therapeutic target [22][23]. The search for substances (phytochemicals) with antiviral properties that could inhibit SARS-CoV-2 Mpro is still undergoing [22].
An in vitro study proved that phytocannabinoids—CBD and THC—have the ability to interact with SARS-CoV-2 Mpro as antagonists, leading to the inhibition of the virus translation and blocking its replication [5]. There are also reports of CBD’s ability to inhibit TMPRSS2 in several models of human epithelia [17][24]. Additionally, CBD and THC, acting as CB2 receptor agonists, reduce the level of pro-inflammatory cytokines in lung cells [5].
ACE2 receptors play a key role in the entry of the SARS-CoV-2 virus into the host cells. Downregulation of their expression in tissues may prove to be an important strategy in reducing the susceptibility to infection [17]. An in vitro study showed that high-CBD extracts from cannabis have the ability to downregulate the expression of ACE2 receptors in artificially inflamed tissues subjected to TNFα/IFN-γ [17]. The use of CBD alone did not reduce the expression of the ACE2 receptor. The results suggest a possibility that it is the entourage effect of the components of the extracts other than CBD that is responsible for the downregulation of ACE2 receptor expression [25]. Interestingly, the authors of another in vitro study achieved the reduction of ACE2 receptor expression in epithelial cells of lung tissue after administration of CBD [26].
Other phytocannabinoids—cannabigerolic acid (CBGA) and cannabidiolic acid (CBDA)—also prevented the entry of SARS-CoV-2 into human epithelial cells, as well as averted the infection induced by a pseudovirus expressing the SARS-CoV-2 spike protein. CBGA and CBDA were similarly effective against both alpha and beta variants of SARS-CoV-2 [27].
Another in vitro study determined that from the tested cannabis compounds, only CBD has antiviral properties and the ability to inhibit viral replication in SARS-CoV-2 infection. Moreover, the use of CBD in combination with THC significantly weakened the effectiveness of CBD [18]. Authors indicate that CBD effectively eradicates viral RNA expression in human cells by preventing protein translation and other cellular alterations. Surprisingly, unlike in other studies [5], CBD did not inhibit the activity of Mpro protease [18]. Authors suggested that suppression of the infection and degradation of viral RNA caused by CBD could be explained by activation of the interferon signalling pathway. As SARS-CoV-2 primarily suppresses the pathway, which may lead to excessive release of pro-inflammatory cytokines, and therefore a cytokine storm, CBD plays a vital role by reversing the process [18].
Subsequently, authors of the study further examined the capacity of cannabinoids to prevent SARS-CoV-2 infection. Analysis of over 93,000 patients at the University of Chicago Medical Center tested whether the usage of cannabinoids would result in a different SARS-CoV-2 incidence rate compared to the non-cannabinoid group. The results showed that only 5.7% of patients with a previous record of using cannabinoids (approximately 400 patients) tested positive for SARS-CoV-2, compared to 10% in the non-cannabinoid group. Moreover, patients taking CBD had an even lower rate of positive test results—1.2%—compared to the group using other cannabinoids—7.1% [18].
The findings, collectively with the in vitro studies, suggest protective properties of CBD against SARS-CoV-2 infection. In vitro reports indicate that the inhibitory effect of CBD on viral replication may be at least as potent as remdesivir, an antiviral drug already used in treatment of COVID-19 patients [25]. The antiviral properties of phytocannabinoids are presented in Table 1. Due to the lack of sufficient knowledge about the mechanisms of antiviral action modes of cannabinoids in COVID-19 infection, and sometimes even contradictory reports, it is necessary to conduct further studies that would allow to clearly verify their effectiveness.
Table 1. The antiviral properties of phytocannabinoids.

In the lung cells of patients infected with SARS-CoV-2 there were detected increased levels of C reactive protein (CRP), pro-inflammatory cytokines, such as IL-1β, IL-6, IL-7, IL-8, and IL-9, fibroblast growth factor (TGF), interferons (IFNs), granulocyte colony-stimulating factor (G-CSF), granulocyte-macrophage colony-stimulating factor (GM-CSF), tumor necrosis factor (TNF), macrophage inflammatory protein 1α (MIP-1α) and vascular endothelial growth factor (VEGF), which are associated with the severe course of the disease [5].
Evidence suggests that the severity of COVID-19 is generally associated with a cytokine storm, primarily driven by the pro-inflammatory cytokines—IL-6, IL-8 and TNF-α, the overproduction of which leads to impaired oxygen diffusion, pulmonary fibrosis and multi-organ failure [23]. In vivo studies prove the inhibitory effect of cannabinoids on the course of cytokine storms, improvement of lung tissue function and reduction in inflammation [23][28][29], which may prove beneficial in the treatment of COVID-19. The anti-inflammatory effect of cannabinoids is based both on the regulation of activity and migration of cells of the immune system (macrophages, monocytes, neutrophils, lymphocytes, dendritic cells, NK cells, fibroblasts and endothelial cells), reduction in pro-inflammatory cytokines (IL-1β, IL-2, IL-6, IL-8, IL-12, IL-17, IL-18, IFN-γ, TNF-α, monocyte chemoattractant protein 1 (MCP-1)/CCL5 and GM-CSF), as well as upregulation of the release of anti-inflammatory cytokines (IL-4, IL-10, IL-11 and TGF-β) [23].
Authors of an in vitro study investigated the effects of CB1 and CB2 agonist—WIN 55,212-2 (WIN)—in human cardiomyocytes infected with SARS-CoV-2 [30]. WIN reduced the levels of IL-6, IL-8, IL-18 and TNF-α in the infected cells, as well as attenuated cytotoxicity measured by downregulation of LDH. The findings suggest that cannabinoids, such as THC, could protect the cardiac tissue in SARS-CoV-2 infection [30].

More
© Text is available under the terms and conditions of the Creative Commons Attribution (CC BY) license; additional terms may apply. By using this site, you agree to the Terms and Conditions and Privacy Policy.
Upload a video for this entry
Information
Subjects: Infectious Diseases; Medicine, General & Internal
Contributors MDPI registered users' name will be linked to their SciProfiles pages. To register with us, please refer to https://encyclopedia.pub/register :
Agata Lewandowska
,
Michał Graczyk
View Times: 427
Revisions: 2 times (View History)
Update Date: 22 Apr 2022
Table of Contents
1000/1000
Hot Most Recent