+1 point
Thank you for your contribution! You can also upload a video entry related to this topic through the link below: https://encyclopedia.pub/user/video_add?id=21864
Check Note
2000/2000
Organization of Indian Steel Sector

Steel manufacturing is a technologically complex industry having subsequent linkages in terms of material flow and plays a vital role in determining infrastructure and the overall development of a country. The global steel industry and its supply chain constitute 40 million jobs across the world. In 2019, India established itself as the second-largest steel producer with 111.3 million tons, constituting 5.9% of total crude steel production on the planet for the respective year, and it has ambitious plans to produce 250 million tons by 2030 with a per capita consumption aim of 160 kg.

Steel manufacturing is a technologically complex industry having subsequent linkages in terms of material flow and plays a vital role in determining infrastructure and the overall development of a country. The global steel industry and its supply chain constitute 40 million jobs across the world. In 2019, India established itself as the second-largest steel producer with 111.3 million tons [1], constituting 5.9% of total crude steel production on the planet for the respective year, and it has ambitious plans to produce 250 million tons by 2030 with a per capita consumption aim of 160 kg. This is understandable, as the current per capita steel consumption in India is only 74 kg, which is much lower than the average global consumption of 229 kg [2]. India’s crude steel production and per capita consumption with projection for the year 2030–2031 is given in Figure 1 and Figure 2. Moreover, the steel industries in India have challenges in terms of the non-availability of metallurgical grade coal within the country, leaner grades of ore, solid waste utilization, and water scarcity. Environmentally, the steel sector also faces challenges in terms of bringing down the carbon emission by 20% of 2005 levels within 2030. Indian steel manufacturers and associated metallurgical and mining industries are taking various measures and also need to take various measures in the future in terms of process improvements and developments to cater to the above needs. 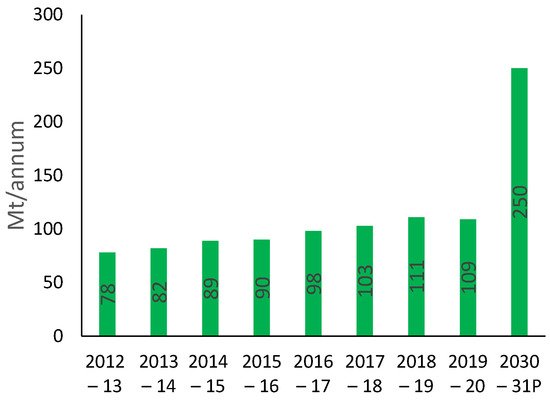 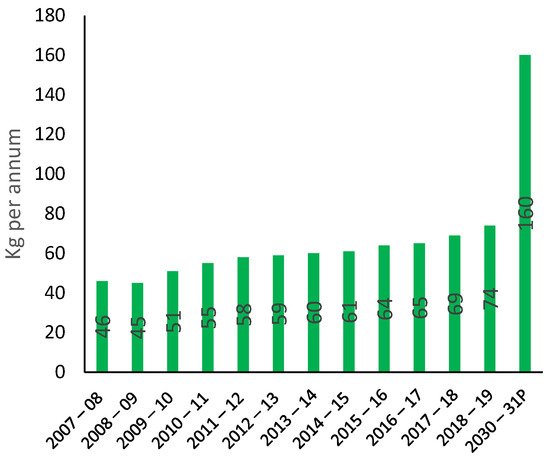 Figure 2. Per capita consumption of steel in India.

Based on production routes, Indian steel industries are divided into two types: industries producing steel primarily through a hot metal route using large integrated steel manufacturing units and others through primarily scrap and DRI in relatively smaller manufacturing units. The former ones are denoted as oxygen route manufacturers and the latter are denoted as electric route manufacturers henceforth.
Operations of the oxygen route manufacturers start from coke making, reducing iron ore primarily through blast furnace (BF) for the production of hot metal, and subsequently producing crude steel with standard specifications. There are also steel plants that use direct reduction (MIDREX), smelting reduction (COREX), and BF combination followed by the converter-arcing (CONARC) process. They all are ore-based production routes. Typically, these integrated manufacturers produce more than 5 million ton per annum from a single work location.
Electric route manufacturers primarily use scrap (they also produce DRI through a rotary kiln process), direct reduced iron (DRI), or hot briquetted iron (HBI) as raw material for the induction furnace route, and a few of them use the electric arc furnace route (EAF). Apart from these two, there are also independent hot and cold rolling units as well as sponge iron producers who use rotary kiln processes and pig iron producers who use mini blast furnaces. Typically, these manufacturers produce less than 1 million tons per annum from a single unit. Almost half of the Indian steel production is made from the electric route steel producers. Detailed process maps followed by Indian manufacturers are shown in Figure 3. The production capacity of various steelmaking processes in India is shown in Table 1. Crude steel production by process with its share percentage in Indian steel industry over the years is shown in Figure 4. 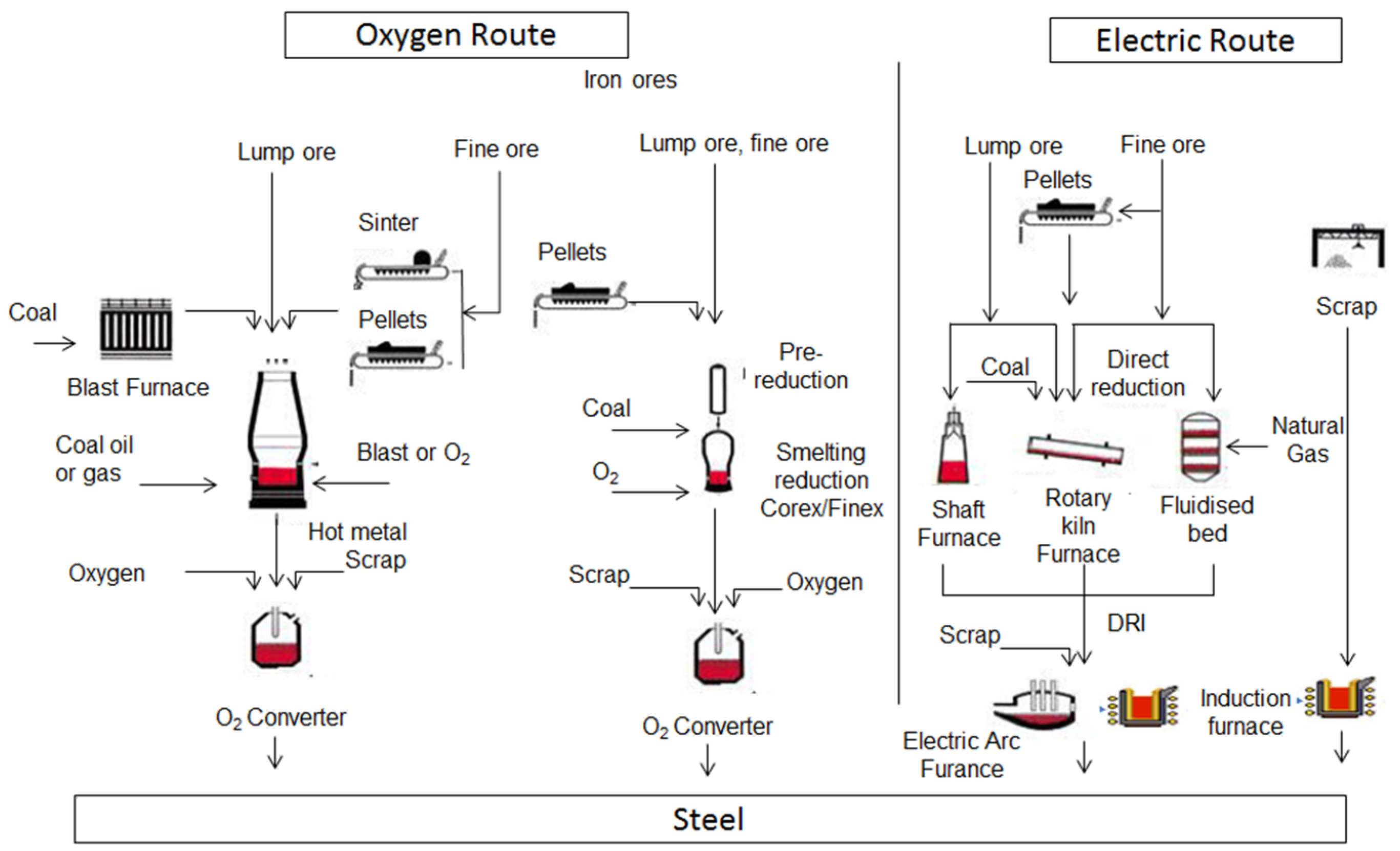 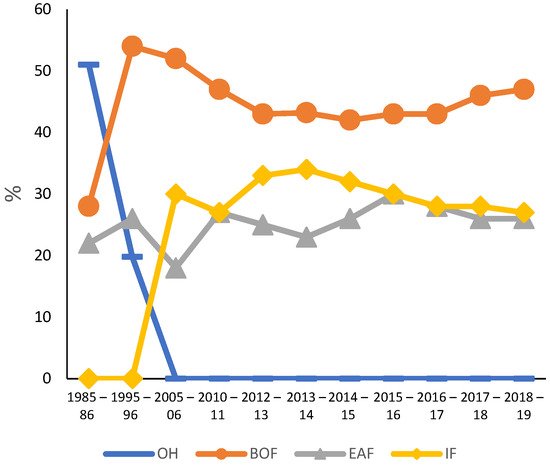 Currently, the Indian steel sector can be broadly classified into (1) plants using oxygen route steelmaking processes and (2) plants using electric route steelmaking. Oxygen route steel makers mainly use blast furnaces, but additionally, there are two plants with four COREX units to produce hot metal for making steel. On the other hand, the electric route steel makers use DRI either produced in coal-based units or gas-based units and imported scrap for making steel. An Indian specialty is the huge number of small-size induction furnaces (the current number 1174) with an annual production of only tens of thousands of tons of steel each. The current ratio of the oxygen route versus the electric route, EAF and IF is approximately 45:30:25. Overall, the Indian steel production is expected to grow to 250 million tons per annum by 2030 and it is still growing, albeit retarding toward the year 2050 [3].
In blast furnaces, coal injection (PCI) up to 200 kg per ton of hot metal is already in use, and this is expected to only marginally increase due to constraints in operation. Additionally, steel plants are exploring possibilities of injecting gases having a significant proportion of hydrogen through tuyeres and/or in the stack to reduce the carbon footprint. The gas for the “step changes” injection may come either from imported natural gas or large gasifiers using domestic coals, and imported cheaper coals can also be envisaged. With the increasing usage of gases in these plants, DRI-based units will take a prominent role. Furthermore, if the hydrogen economy becomes a reality in the future, these plants can shift toward hydrogen-based DRI production. Further owing to the virgin ore-based production and large capacity, the oxygen route plants continue to produce high-end flat products.
As of 2020, the utilization of hydrogen in the steel industry could play a growing role in mitigating CO2 emissions as well as improving the existing process. The cost of hydrogen is expected to fall with the rise in the utilization of gas-based processes and increase in renewable energy sources. Under a future low-carbon situation, it can be foreseen a tremendous growth in demand for hydrogen from 2030. Thus, hydrogen production will increase rapidly from 2030 to 2050, enabling new capacity additions utilizing hydrogen-based reduction processes.
Plants that use electrical steelmaking routes, primarily based on induction furnaces, produce construction-quality steel grades and are located close to the markets, i.e., spread across the country. Many of these units use also DRI, which is primarily produced through coal-based processes. With increasing environmental threats, these plants will be forced to shift from coal-based to gas-based processes. At the same time, a transition to larger capacity units is reasonable for economic reasons. The gas for these DRI units may be imported natural gas or from coal gasification units. These units shall supply small electrical route steel makers located near consumer markets where the scrap also will be available in the future as the consumption and recycling of steel rise in the country. At present, induction furnaces with a maximum capacity of 50 tons are being used. Depending on the demand from the consumer markets, especially near large cities, electric arc furnace-based steelmaking units with large capacities can also emerge.
Incremental advancements can be achieved through improvements in the operation of equipment and by upgrading process equipment to commercially available Best Available Technology (BAT), which reduces the energy demand required per ton of process output. An energy saving of around 20% per ton of crude steel can be achieved by improving the operational efficiency and adopting the BAT for all the units of the BF-BOF production pathway, relative to the global average energy intensity for this route today [4]. Step changes in efficiency shall be achieved by switching to alternative production pathways such as electrification or other fuel shifts. Using electricity to substitute for fossil fuels in the provision of process heat in equipment outside the main process units, particularly in preheaters and boilers, is another option where electrification can make a big change.
For meeting the global environmental goals, India is expected to shift from coal-based processes to more gas-based processes. These changes are expected in both sectors: namely oxygen route steel makers as well as electric route steel makers. It will be facilitated by the reduced prices of LNG due to the increasing number of ports, thus helping gas find a larger foothold in the Indian mix. Increased the replacement of coal-based Direct Reduced Iron (DRI) with gas-based DRI will also help in attaining reductions in final energy consumption and CO2 emissions. This shift in processes in the iron and steel sub-sector will result in a change of the industrial ecosystem in the country. By applying the necessary improvements in the process such as moving toward gas-based DRI, increased hydrogen usage and the implementation of new technologies such as the CCUS target on specific energy consumption and specific emissions shall be achieved. Figure 5 shows a scenario of emission reduction potential for the Indian iron and steel sector. It incorporates the incremental improvements discussed previously and, additionally, an introduction of HIsarna and a conservative transition to hydrogen [3]. The projected production growth would mean a tremendous rise in emissions from 2020 to 2050 (Baseline). The planned actions to cut emissions would result in a 56% reduction by 2050 to a level where the total emissions would be approximately 20% higher than today! The peaking year would be around 2040. These issues proceed from the predicted radical growth of the steel production. The concurrent enterprises to raise the production and to cut the emissions are surely contradictory. 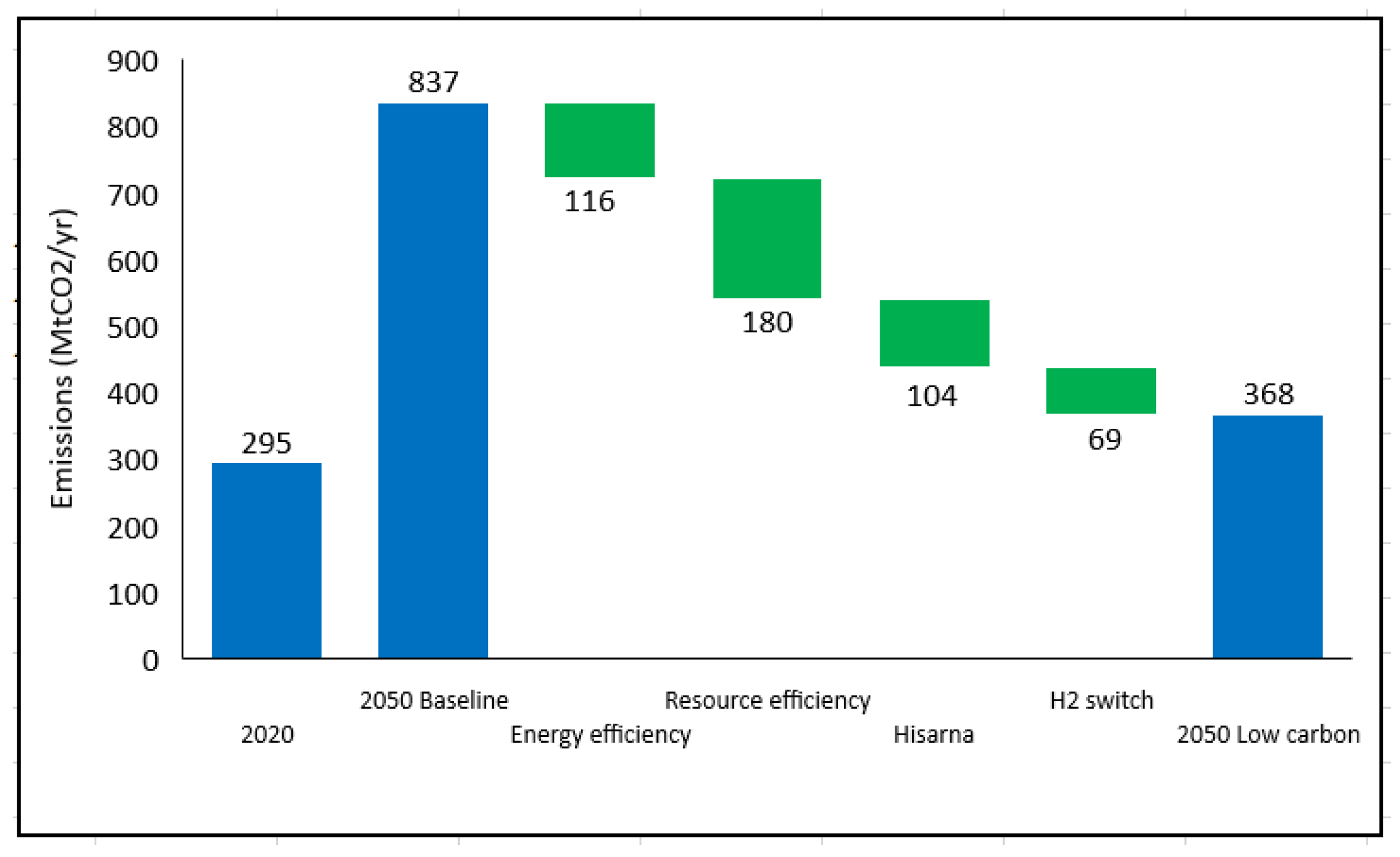 Figure 5. Emission reduction potential of the Indian iron and steel sector.
For fast-growing economies with a rising emissions trajectory, the need to understand the key variables that impact the choice of a peaking year is as critical as the determinants for the selection of a net-zero year. An analytical formulation [5] shows that the economic growth rate significantly impacts the ‘effort gap’. For India, peaking in 2030 would be challenging given the expected economic growth rates for at least the next two decades.
Although the Indian steel industry and the government are aiming for a reduction in CO2 emissions as well as in specific energy consumption, realization demands stronger commitment in the development of low-carbon and carbon-neutral technologies and the rapid implementation of best available technologies to improve the current processes. Major technical breakthroughs are needed as well as research promotion in the field of carbon-lean/carbon-free iron making. It can be achieved through enhanced hydrogen utilization in the process, which is linked to the production and storage for hydrogen. In addition, the growing supply of scrap is a strong trend in India, which means a growing demand on scrap-based processes, which correspondingly increases the demand for carbon-neutral electricity.

More
© Text is available under the terms and conditions of the Creative Commons Attribution (CC BY) license; additional terms may apply. By using this site, you agree to the Terms and Conditions and Privacy Policy.
Upload a video for this entry
Information
Subjects: Metallurgy & Metallurgical Engineering
Contributors MDPI registered users' name will be linked to their SciProfiles pages. To register with us, please refer to https://encyclopedia.pub/register :
Lauri Holappa
,
Viswanathan N Nurni
,
Sethu Prasanth Shanmugam
,
MANJINI SAMBANDAM
View Times: 202
Revisions: 5 times (View History)
Update Date: 20 Apr 2022
Table of Contents
1000/1000
Hot Most Recent