+1 point
Thank you for your contribution! You can also upload a video entry related to this topic through the link below: https://encyclopedia.pub/user/video_add?id=21809
Check Note
2000/2000
AS-OCT in Corneal Disorders

Anterior segment optical coherence tomography (AS-OCT) is a non-contact method of in vivo ocular imaging technology. It uses low coherence interferometry that measures the echo time delay of light backscattered from tissue structures and combines multiple axial scans into a composite B-scan image. Earlier ultrasound bio microscopy was used for anterior segment imaging, but with time AS-OCT has become a popular imaging tool for anterior segment imaging. AS-OCT is faster and provides more in-depth assessment of the anterior chamber and is repeatable and reproducible. For AS imaging, longer wavelengths (1050–1310 nm) are preferred than retinal OCT (800–900 nm) due to higher penetration and less scattering.

AS-OCT, also referred to as an optical biopsy, is an important non-invasive tool in diagnosis and monitoring of disease progression in various conjunctival diseases of the eye. Most notable of its uses is in differentiating malignant ocular surface squamous neoplasia (OSSN) from the benign lesions. The others uses are to differentiate a pterygium from a pseudopterygium and a pterygium from a pinguecula, to determine the precise measurement of a pterygium which helps to detect it’s growth and recurrence, and assess the risk of stromal scarring and astigmatism [1]. In a normal AS-OCT of the ocular surface, the tear film overlying the conjunctiva and the cornea is bright white. The corneal epithelium is thin and dark, while that of the conjunctiva and the limbus is thin but mildly hyper-reflective. The sub-epithelial tissue of the cornea is arranged in a regular linear pattern, whereas that of the conjunctiva is less regular and hyper-reflective.
Pterygium: A primary pterygium is seen as a hyper-reflective mass in the sub-epithelial conjunctival area extending into the cornea, causing elevation of the corneal epithelium and separating it from the underlying Bowman’s membrane. The pterygium tissue below the corneal epithelium extends beyond the corneal tip of the clinically evident pterygium mass, therefore, measuring the size of the pterygium more accurately.
Pinguecula: A Pinguecula is very similar to a pterygium but stops at the limbal region and doesn’t elevate the healthy corneal epithelium. There is also a clearly defined line of separation between the pinguecula and the underlying scleral tissue.
Pseudoterygium: A pseudopterygium is seen as an overgrowing membrane that is not attached to the underlying cornea, with a plane of cleavage between it and the underlying corneal epithelium [2][3]. Increased risk of stromal scarring can be associated with pterygia with flat cornea-scleral transition zone as compared to the nodular variety, in pterygia with reduced apical head thickness, and in pterygia with partially disrupted Bowman’s membrane [1][2].
Ocular surface tumors: OSSN is a lesion involving epithelium of both cornea and conjunctiva. On AS-OCT imaging, OSSN can have either or all of these three characteristic features: hyper-reflective epithelium, thickened epithelial layer, and an abrupt transition from normal to abnormal epithelium (Figure 1) [4][5]. Another feature that has been identified in AS-OCT of OSSN cases is presence of hypo-reflective or cystoid spaces. These cystoid spaces could be type 1, which are small, round with hypo-reflective contents or type 2, which are larger, irregular with hyper-reflective material inside [6]. AS-OCT findings have a 94% sensitivity and 100% specificity for diagnosing OSSN and differentiating it from pterygium [7]. For OSSN treated with topical chemotherapy, AS-OCT after treatment showed normalization of epithelium [4][8]. Since AS-OCT can diagnose microscopic subclinical disease, it also prevents premature termination of topical chemotherapy in patients with residual subclinical disease and thus prevents the risk of recurrence [8][9]. AS-OCT helps in non-invasive diagnosis of OSSN and can be used to determine the need for treatment initiation as well as monitoring of disease course [4][5][10]. Since involvement of sub epithelial tissue and sclera is difficult in AS-OCT due to posterior shadowing of epithelial lesion, histopathology continues to be gold standard for diagnosis of deeper infiltration of tumor [10]. Angiographic features of OSSN have also been described using FA, ICGA and recently OCT-angiography has been used to demonstrate vasculature patterns. FA demonstrates vascular leakage while ICGA shows conjunctival feeder vessels and sea fan shaped intra-tumoral vessels [11]. OCT-A shows blood flow in epithelium and sub-epithelial tissues and highest density of vessels is seen in conjunctival part of tumor. It is also able to show corneal vessels under the tumor which are clinically not visible. Although OCT-A has the advantage of getting images without contrast dyes, compared to FA and ICGA, it cannot evaluate vascular leakage and feeder vessels [12]. In patients treated with topical chemotherapy such as 5-FU, FA, and ICG also demonstrated regression of vascular leakage, feeder vessels and intratumoral vessels after completion of therapy [11].

LSCD on OCT manifests as thinning of the limbal and corneal epithelium [14][15]. These changes are global in cases of total LSCD while in partial disease they are more profound in the affected areas. The unaffected areas may have normal epithelial thickness or it may be reduced, indicating a subclinical form of the disease [14]. Additionally, direct visualization of the disrupted palisades of Vogt is possible with the use of this device [16]. With the use of image processing software, Varma et al., have described a method of quantifying the reflectivity patterns of the line scans of OCT and both epithelial and stromal reflectivities were studied in eyes with LSCD. The authors devised a ratio between them (ES ratio) and proposed that values greater than 1.29 were diagnostic of LSCD. Several corneal disorders with vascularization may mimic LSCD. With the help of the segmentation feature of the OCTA, differentiating the true LSCD cases is possible as the vasculature in LSCD is usually restricted to the superficial layers [17]. A superficial vascular density value greater than 0.38 has good sensitivity and specificity for LSCD [17].
Limbal stem cell transplantation (LSCT) is perhaps one of the most popular treatment options in eyes with LSCD. Of the different types of LSCT, simple limbal epithelial transplantation (SLET) is preferred for both unilateral and bilateral LSCD in view of its single-step technique which does not require any additional laboratory support and yields stable results [18]. An important step of SLET is the dissection of the overlying fibrovascular pannus. However, the pannus may preclude assessment of the underlying stromal thickness and scarring on clinical examination and so perforation of the cornea may occur during this step in very thin corneas. Preoperative assessment of stromal thinning on OCT may help identifying such cases (Figure 2). The degree of stromal opacification may also be visible on these scans and the need for a secondary intervention for visual rehabilitation can be planned accordingly. The infra-red image of the cornea that accompanies the line scans also provides valuable information in the decision making in such cases (Figure 3). If the anterior chamber details are discernible, performing SLET in isolation is usually sufficient while a keratoplasty may be required if no structures are visible [18][19]. The postoperative monitoring of recovery of the corneal epithelium following SLET is also feasible with an AS-OCT (Figure 3) [20]. The ES ratio gradually decreases and returns to near normal values and this trend can be followed up with AS-OCT scans [20]. 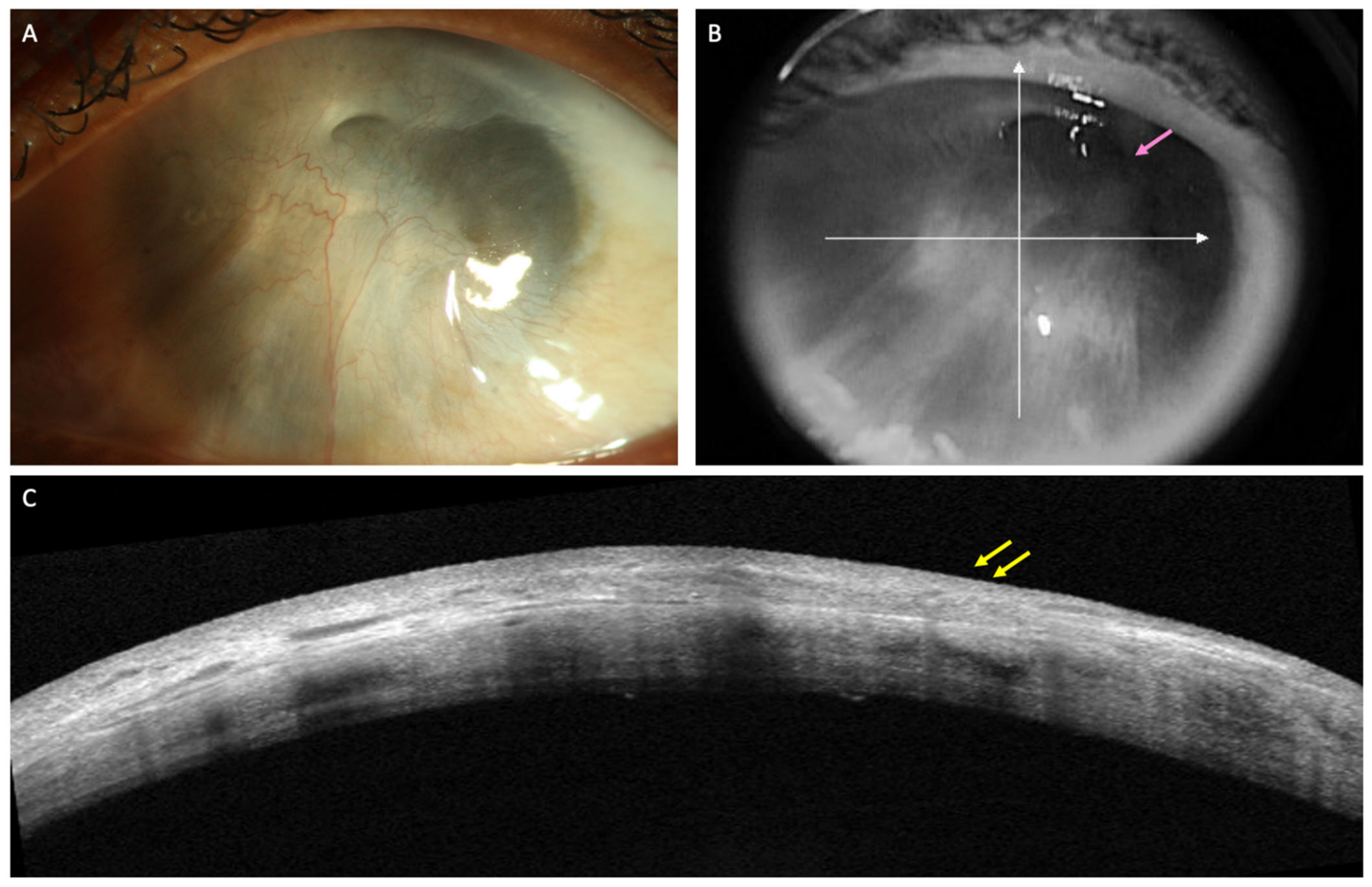 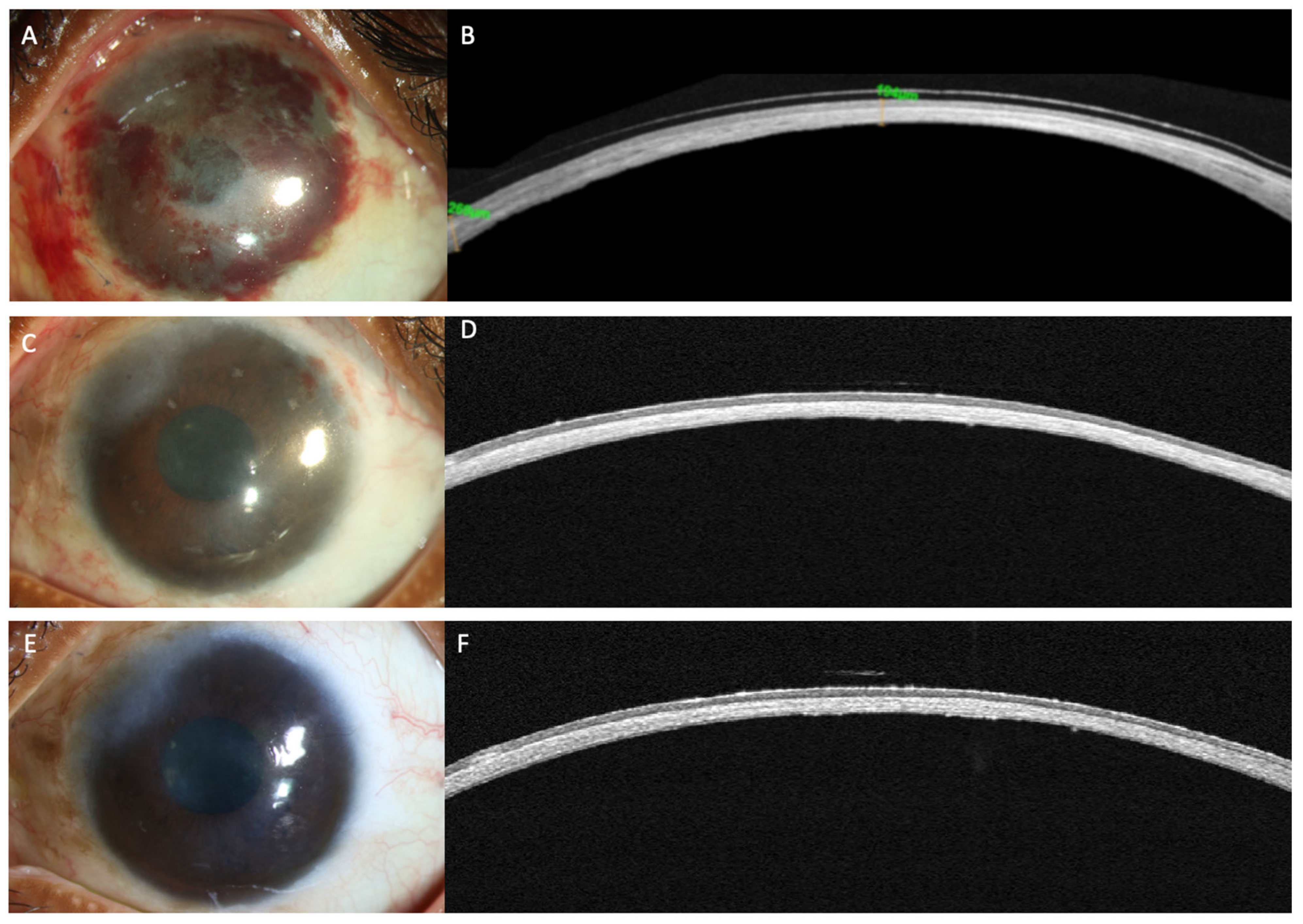 Figure 3. (A–F) This is a collage of images depicting recovery following simple limbal epithelial transplantation (SLET) in the patient from Figure 2. (A,B) Slit lamp image and the corresponding optical coherence tomography (OCT) image captured in the immediate postoperative period illustrating thinning of the corneal stroma with absence of the hyperreflective conjunctival epithelium. (C) The surface is well epithelialized, six weeks after SLET with stromal thinning evident on the OCT scan along with a normal hypo-reflective corneal epithelium (D) The stable ocular surface is maintained 5 months after the surgery (E,F).

The sequelae that ensue from OCBs usually depend on the severity of injury in the acute phase of the disease. One of the most important clinical findings that helps prognosticate these eyes is the presence of limbal ischemia. However, detection of this finding in the acute phase is subjectable and often incorrectly gauged [21]. OCTA provides an objective way of assessing the presence of and quantifying the extent of limbal ischemia (Figure 4). The extent of ischemia as measured by an OCTA is comparable to the ischemia assessed by standard angiography techniques [22]. Various indices have been described of which vessel density is most frequently used and correlates with the severity of the injury [23][24]. Incorporation of these parameters in the existing grading systems is being attempted to provide a more accurate method of predicting the prognosis of these cases [23]. Furthermore, the need for interventions in the acute phase, such as a tenonplasty, can also be determined by the severity and location of the ischemia. The degree of ischemia present may also predict the rate of epithelial healing and these eyes can be closely monitored for the need for procedures such an amniotic membrane grafting to augment the healing process. OCTA was used for serial monitoring of the suspect areas can help confirm the presence of ischemia, as vasospasm is reversible, and the normal vasculature becomes evident on the subsequent scans [25]. 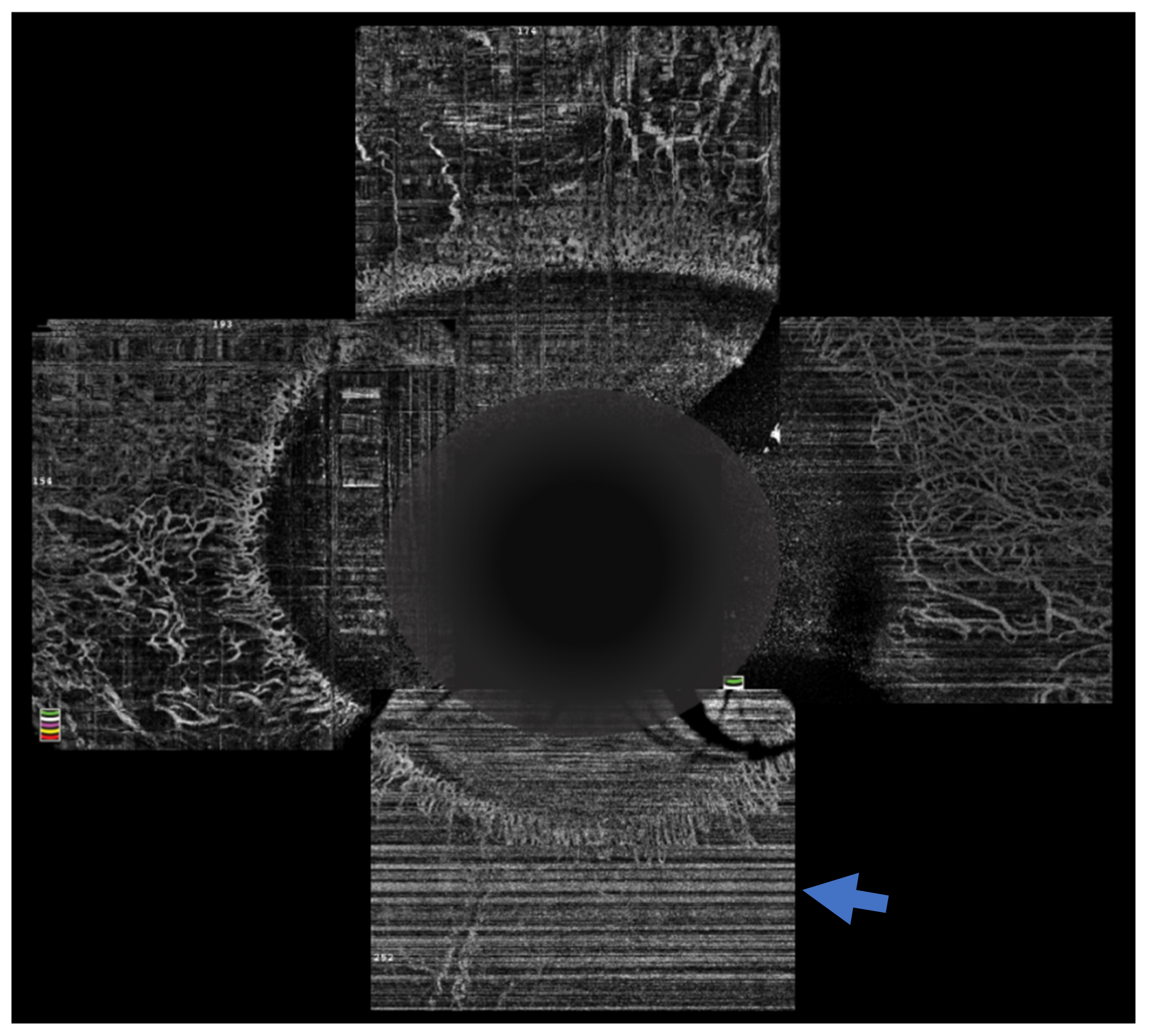 Figure 4. Optical coherence tomography angiography of an eye with chemical injury illustrating lack of vasculature inferiorly (arrow), in the area with ischemia.

A variety of disease response such as inflammation, infection, degeneration, and trauma could disturb the ocular surface balance and leading to corneal neovascularization (CNV). CNV compromises the transparency of the cornea resulting in poor vision and finally loss of vision [26][27]. The most common way of assessing anterior segment vasculature is through slit-lamp photography (SLP) and fluorescein dye-based angiography. Though widely used, SLP has certain limitations such as poor visualization of blood-vessels in the presence of corneal edema or in fibrotic cornea, resulting in compromised image analysis and poor sensitivity for the smaller vessels [28]. With the recent advancement in image acquisition and analysis technology, OCT uses has recently increased in visualizing and analyzing blood vessels too resulting in OCT angiography (OCTA), an emerging method for imaging ocular vasculature [29][30]. Though OCTA is widely used in posterior segment imaging, its application for the anterior segment is poorly explored. AS-OCTA is a new technology to visualize anterior of the eye blood vessels. It has immense potential for future clinical diagnosis and applications in corneal and iris pathologies, pre-operative surgical planning, evaluating the efficacy of new antiangiogenic drugs and assessing limbal stem cell deficiency [29][30][31][32].
A recent pilot animal model study highlights the importance of AS-OCTA as a useful non-invasive imaging tool for objective assessment of CNV for examining the efficacy of a drug on the angiogenesis., which is essential for further clinical studies [33]. In clinics AS-OCTA has shown to be a promising tool for CNV, LSCD and to detect subclinical neovascularization of iris (NVI) that appeared in its early stages.
Advancement of technology and convergence of health care and computational biology, it is compelling to use artificial intelligence to produce normative databases and carry out deep analysis for appropriate AS-OCTA studies. Further studies are needed for designing the feasibility of combining OCTA with fluorescence angiography using multi-modal approaches. With further development, OCTA for anterior segment imaging in the clinics may become common in the near future.

More
© Text is available under the terms and conditions of the Creative Commons Attribution (CC BY) license; additional terms may apply. By using this site, you agree to the Terms and Conditions and Privacy Policy.
Upload a video for this entry
Information
Subjects: Ophthalmology
Contributors MDPI registered users' name will be linked to their SciProfiles pages. To register with us, please refer to https://encyclopedia.pub/register :
Akhil Varshney
,
Muralidhar Ramappa
,
Sayan Basu
,
Vito Romano
View Times: 122
Revisions: 2 times (View History)
Update Date: 15 Apr 2022
Table of Contents
1000/1000
Hot Most Recent