Submitted Successfully!
Thank you for your contribution! You can also upload a video entry related to this topic through the link below:
https://encyclopedia.pub/user/video_add?id=2170
Check Note
2000/2000
Alcohol Craving
Edit
Upload a video
This entry is adapted from 10.3390/jcm9093018

Craving is a multidimensional phenomenon involving an intense urge to consume substances. It is perceived as an individual experience of “wanting” a drug that may result in motivational and drug-seeking behavioral patterns. Alcohol craving has been extensively studied due to its clinical implications in the development and maintenance of alcohol use disorder (AUD). Craving is considered one of the mechanisms that promote relapse after treatment discharge and even after a prolonged period of abstinence. To better understand the magnitude of the relationship between craving and relapse, it is fundamental to explore factors associated with alcohol craving as it may help in the development of more efficient treatment approaches to prevent relapse in AUD patients.

The influence of age in the field of addictive behaviors has been extensively studied. For example, a study indicated that an early drinking age increases the risk of developing a harmful use of alcohol, including the development of AUD, thus highlighting the importance of the age at onset of drinking-related behaviors[1]. Interestingly, another study concluded that alcohol craving decreases with age[2], possibly due to self-regulatory processes and problem-solving abilities in later stages of life improving resilience and coping skills[3]. Regarding gender in AUD, the findings from studies are mixed. One study indicated that women experience greater and more prolonged alcohol cravings than men during detoxification[4]. By contrast, an earlier study found no gender differences in alcohol cravings triggered by a cue-exposure paradigm[5]. Another study showed higher levels of alcohol craving reported by women compared to men in a naturalistic bar environment, with the authors of the study concluding that women were at greater risk of continued alcohol use[6]. In terms of education, a recent study reported that a higher educational attainment may be associated with a lower risk of alcohol-related behavioral patterns. The study showed that greater educational training interfered with the future development of AUD[7]. However, there is insufficient evidence confirming the direct influence of education on alcohol cravings, with the focus instead being on the negative effects of problematic drinking on students’ academic performances[8]. Similarly, the empirical focus is on the relationship between socioeconomic/civil status and alcohol and drug use rather than alcohol craving. Specifically, having a low income and being single predict alcohol and drug use[9].

There are several individual factors emphasizing cognitive-affective-behavioural mechanisms that are associated with alcohol craving. Studies have shown that implicit cognitive processing, i.e. attentional bias, for alcohol-related content predict increased alcohol cravings[10][11]. In relation to psychiatric comorbidities, depressive and manic mood states[12], current comorbid mood and anxiety disorders[13], borderline personality disorder[14], or post-traumatic stress disorder[15] have been associated with alcohol cravings. Furthermore, ecological momentary assessment (EMA) studies have found alcohol cravings to be higher after smoking[16]. In line with this, higher levels of alcohol craving were reported among individuals with active smoking patterns in a residential treatment cohort[17], as well as in individuals who simultaneously use alcohol and illicit drugs[18]. Conversely, abstinence duration has been reported to be associated with reduced alcohol cravings, suggesting that alcohol cessation as a result of treatment may help to regulate cravings[19]. Several studies have indicated that alcohol cravings predict abstinence and, implicitly, relapse, but less attention has been paid to the predictive role of abstinence in alcohol cravings[20][21]. Some studies have found alcohol craving to correlate positively with the severity of AUD [22][23][24][25][26], whereas others have not observed such a relationship[27]. In terms of co-occurring mental health symptoms, several studies have demonstrated a causal relationship between psychopathological symptoms and alcohol cravings. For instance, a network modeling analysis emphasized that anxiety and stress are directly involved in triggering cravings in AUD patients[28]. These results are supported by those of a previous study, confirming that clinical anxiety and stress-related symptoms are robust predictors of alcohol cravings[29].

There are different approaches in the literature that have been applied to explore alcohol cravings, including the use of neurobiological and psychophysiological correlates [30][31], paper and pencil instruments[32], cognitive/behavioral tasks [11][33], or the cue-exposure paradigm[34]. Cue-exposure techniques are generally used to assess alcohol cravings and are based on in vivo, imagery or virtual exposure. This type of assessment method has been developed into a therapeutic approach: cue-exposure therapy (CET). The theoretical baseline of the CET approach relies on the principles of classical conditioning[35]. Transferred to AUD, alcohol-related stimuli become “highly sensitive stimuli”, as a result of systematic and repetitive alcohol consumption accompanied by positive and rewarding properties of alcohol use. The CET approach, also known as Exposure and Response Prevention (ERP), emphasizes the core mechanisms of systematic desensitization[36]. More specifically, CET/ERP involves repeated and prolonged exposure to alcohol-related stimuli, but individuals do not conduct any drinking behaviors. It is hypothesized that repetitive and systematic exposure will reduce the psychophysiological responses to alcohol-related stimuli, as the ultimate goal of this therapeutic approach is to extinguish initially conditioned responses to alcohol cues (e.g., craving)[37]. Nevertheless, there were inconsistent results regarding the effects of CET approach applied in AUD, mainly because therapy sessions involved exposure to only one cue at a time, within clinical settings, which clearly interferes with generalizing therapy effects into daily-life situations of individuals with AUD. This is one of the major limitations of the CET approach[35]. Technological advances have emerged into instruments that complement existing methods applied in mental health settings[38][39][40][41]. A systematic review encompassing studies using Virtual Reality (VR) as an assessment and treatment tool in individuals who misuse alcohol indicated that VR can be provided with a two-folded purpose: on the one hand, VR-alcohol related environments can elicit significant levels of alcohol craving in individuals with a problematic drinking pattern; and on the other hand, VR can add effectiveness to CET approach (VR-CET, Figure 2) due to its technical features[38]. Compared to traditional CET involving in-vivo or imagery exposure, VR can enhance the efficacy of CET through its multiple sensory inputs (e.g. visual, auditory, olfactory), and ultimately the clinician has a higher control over the exposure process[42] . In addition, VR facilitates simulations of real-life scenarios (including social interaction), it allows a high user-platform interaction, it can provide a fully immersive experience and, therefore, VR can enhance the sense of presence within the exposure procedure[43]. 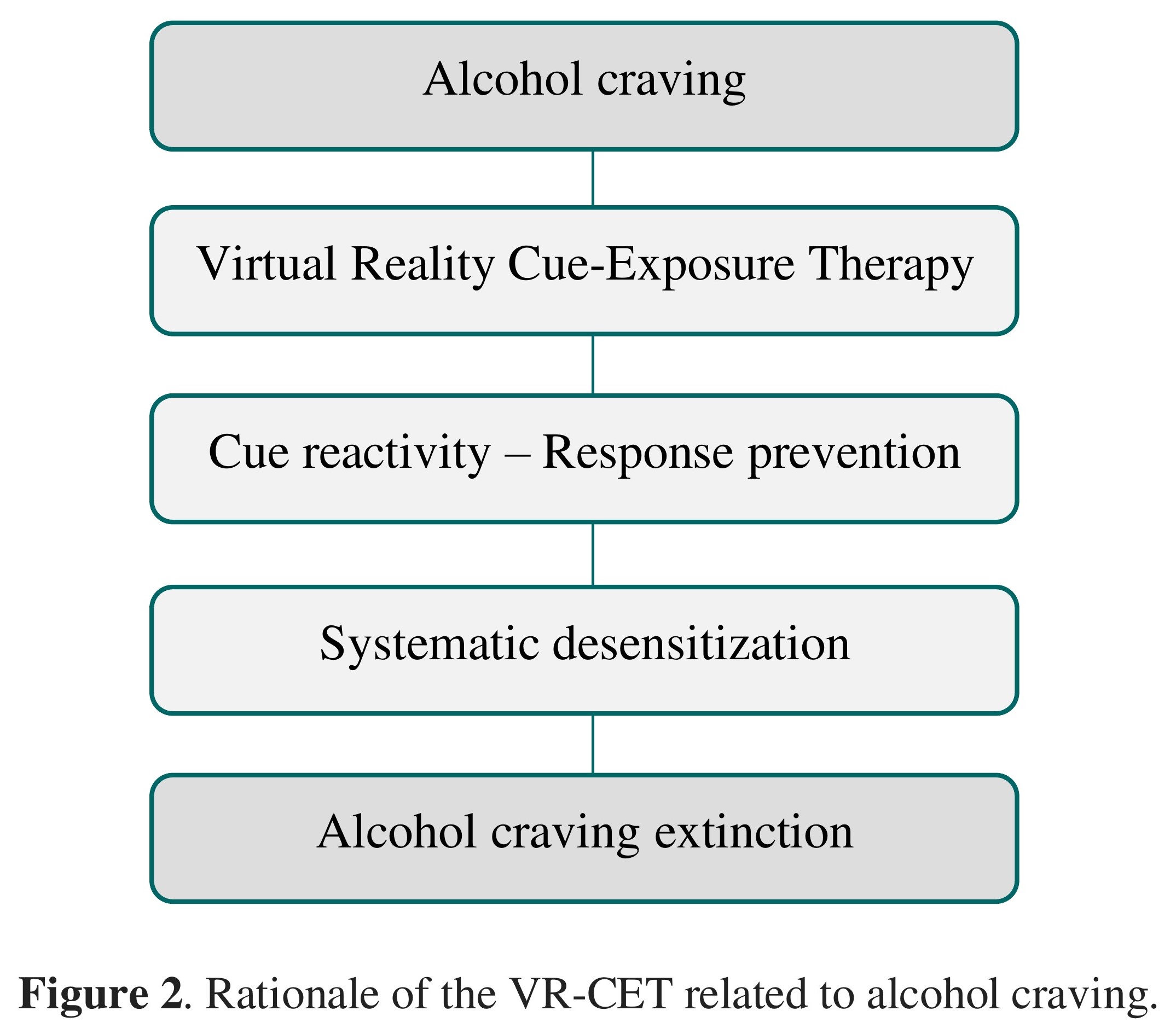