+1 point
Thank you for your contribution! You can also upload a video entry related to this topic through the link below: https://encyclopedia.pub/user/video_add?id=21699
Check Note
2000/2000
Fluorescence Imaging for Biomedical Applications

Molecular imaging offers the possibility to investigate biological and biochemical processes non-invasively and to obtain information on both anatomy and dysfunctions. Based on the data obtained, a fundamental understanding of various disease processes can be derived and treatment strategies can be planned. In this context, methods that combine several modalities in one probe are increasingly being used. Due to the comparably high sensitivity and provided complementary information, the combination of nuclear and optical probes has taken on a special significance.

The fascinating and unique optical properties of lanthanide(III) complexes have intrigued scientists for decades and their potential use as bioprobes was noted as early as the 1970s [1]. Their photoluminescent properties are a consequence of their [Xe]4fn electronic configuration, with the 4f–4f transitions resulting in spectra in the visible to near-infrared (NIR) region. However, lanthanide ions themselves are weakly absorbing due to their small molar absorption coefficients (<10 M−1·cm−1), which is a consequence of Laporte forbidden 4f transitions [2]. At the same time, the resulting long-lived luminescence, due to the Laporte forbidden 4f–4f transition of metal electrons, is a highly attractive property, to obtain it the “antenna effect”, first coined by Weissman in 1942, needs to be exploited [3]. In this case, a highly absorbing ligand, often organic in nature, and whose triplet energy state is at the appropriate level for transfer to the lanthanide excited state by intermolecular energy transfer, needs to be covalently attached or close in space to the receiving lanthanide(III) ion [4]. Typically this is accomplished by functionalisation of the multidentate ligand, to which the lanthanide(III) ion is complexed, with the appropriate antenna moiety. Ligands with negatively charged or neutral oxygen and nitrogen donor atoms give highly stable complexes; see Figure 10 for the chemical structures of representative chelators. DOTA and DO3A, or their derivatives, result in the most stable complexes (log K = 23–25) [5][6].
To date, the luminescent imaging in vitro of terbium(III) and europium(III) complexes has been well explored; however, lanthanide(III) based emitters in the NIR are more scarce [7][8]. The incorporation of ligands that absorb in the NIR region, as well as the two-photon (2P) absorption, have allowed lanthanide(III) complexes to be used for optical imaging [9]. The next section will highlight recent key findings in this area.
The 8-coordinate cationic [YbL]+ complex (Figure 1A) was utilised for 2P-imaging of living cells, with excitation wavelength 800 nm. This, the first reported YbIII 2P-luminescent probe, was the result of a decade of research in which the antenna, chelate and potential for 2P-bioimaging were optimised. In addition to the inclusion of the 2P-antenna, the cationic complex over a neutral one ensured that cell internalisation occurred readily [10].

Figure 1. (A) Chemical structure of the -coordinate cationic [YbL]+ complex; (B) Structures of porphyrinates complexes Yb-4, Yb-2, Yb-cis/trans-3 and Ln-L.
Following this report, a number of YbIII porphyrinate complexes (Yb-4, Yb-2 and Yb-cis/trans-3, Figure 1B) were disclosed for 1P- and 2P-imaging [11][12][13]. The porphyrinates typically have intense bands at approximately 620 nm, suitable for YbIII excitation, and large extinction coefficients. The first report (2018) noted that substitution of meso-phenyl groups can modify Yb-NIR emission. Use of the deuterated Kläui ligand allowed β-fluorinated and non β-fluorinated complexes to be compared. Complex Yb-4 gave the most favourable properties and was further investigated for NIR imaging (excitation 620 nm; emission 935 nm; quantum yield 10%). Due to the long luminescent lifetimes of YbIII complexes, in vitro confocal time-resolved fluorescence lifetime imaging (FLIM) allowed for the removal of cell autofluorescence. In this ground-breaking work, the authors note that porphyrinoid ligands are exciting prospective candidates for NIR molecular probes [13]. In two follow up reports, the authors extend this concept and utilise the molecular probes for in vivo NIR-II imaging. The probes investigated have quantum yields of about 10% in water and probe Yb-2, a water-soluble carboxylate, was further investigated due to its highest resolution and signal-to-background ratio properties. When excited at 532 nm, detection of the NIR-II luminescence signals at a depth of 8 mm in a tissue sample could be observed. In vivo NIR-II fluorescence imaging showed the potential for this probe to be used for bioimaging [11]. The modification of the porphyrinoid Yb-3 resulted in regioisomers with differing properties; the cis isomer was suitable for NIR-II imaging whereas the trans isomer, upon irradiation, produced singlet oxygen [12].
In a very recent report (2021), the photophysical properties of a range of lanthanide-based carbazole-containing porphyrinoid complexes (Figure 1B, Ln-L, Ln = Gd, Yb and Er) have been further modified and examined in vitro and in vivo. As above, the coordinating ligand, a carbazole-based porphyrinoid, was chosen due to an intense absorption band at 630 nm and a large extinction coefficient. The complexes were investigated for their potential usage as photothermal therapeutics as well as NIR imaging agents. The lanthanide complexes exhibited a NIR absorption at 706 nm with the YbIII complex yielding the most encouraging results in vitro. For the encapsulation of the YbIII complex in mesoporous silica nanoparticles after intravenous injection, the in vivo studies confirmed that the photoirradiation of the tumour using a NIR laser (690 nm), with temperature monitoring, could be used to monitor tumour progress [14].
A number of pyclen-based ligands have been explored in the development of a family of lanthanide-based luminescent probes (Figure 2). The findings build on previous work within the group and others, where the photophysical different chelates and lanthanide ions were investigated for bioimaging applications. In this report, the lanthanide complexes, in all cases, have a coordination number of 9, thereby resulting in hydration numbers (q) of 0 or below 1. The lanthanide complexes, [EuL4a], [SmL4a], [YbL4b], [TbL4c], [DyL4c] and [EuL4a’] (Figure 2), can be excited between 300 and 400 nm. Depending on the lanthanide complex, they can also undergo 2P-excitation (excitation between 700 and 900 nm), which is more valuable for in vivo bioimaging applications. The results from the in vitro cellular studies are shown in Figure 2. Further studies with [EuL4a] in zebrafish embryos, which was shown to be non-toxic, and 2P-excitation resulted in a high-resolution image. The authors highlight the potential of these lanthanide-based luminescent probes for imaging thick tissue and subsequent diagnosis of disease [15]. The 161Tb and 177Lu complexes of these ligands are thermodynamically stable and kinetically inert. Thus, such ligand complexes have the potential for radionuclide therapy as well as imaging [16]. 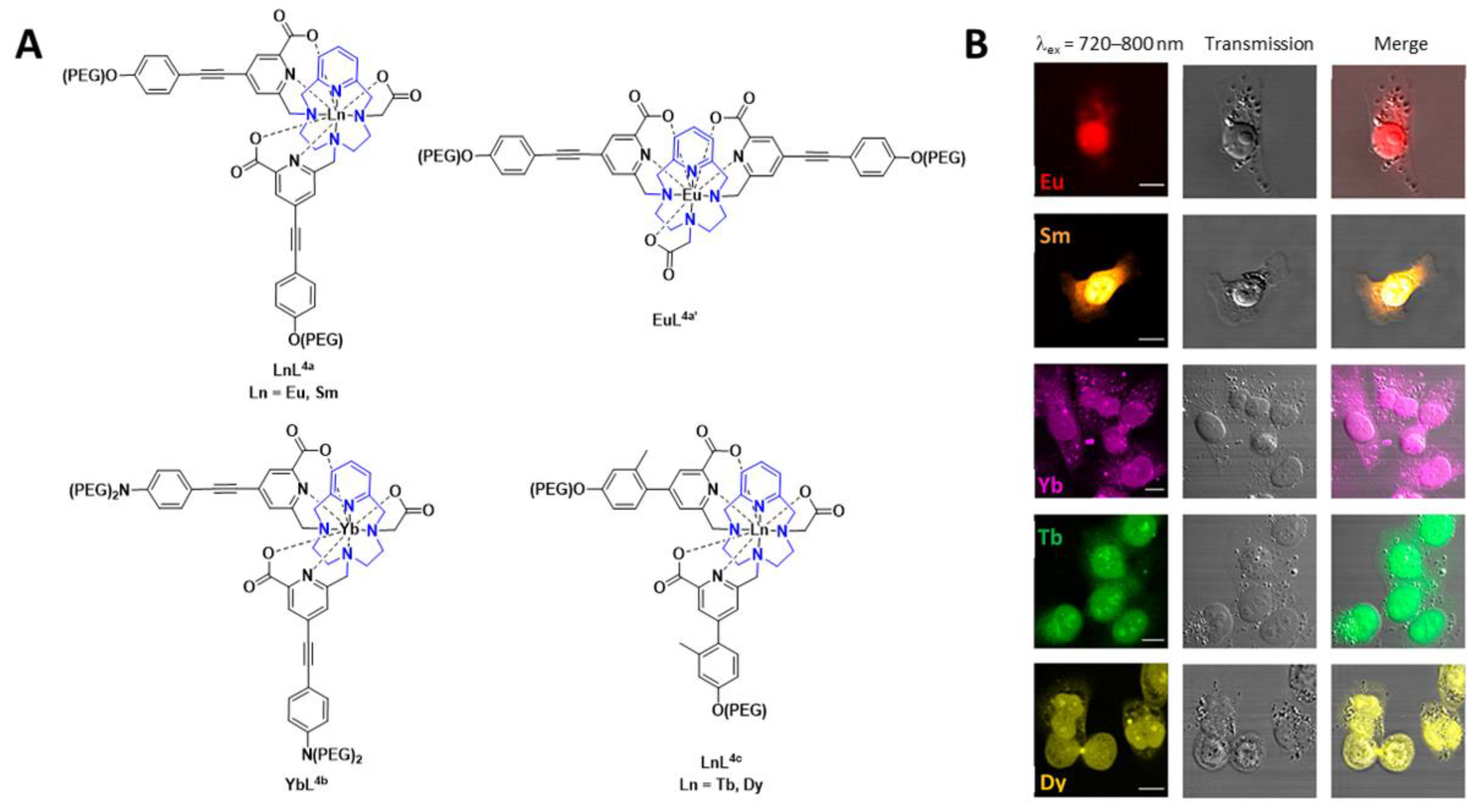 Figure 2. (A) Chemical structures of lanthanide-based probes containing pyclen ligands. (B) Left: 2P imaging of paraformaldehyde-fixed T24-cells: [EuL4a], [SmL4a] (λex = 750 nm), [YbL4b] (λex = 800 nm), [TbL4c] and [DyL4c] (λex = 720 nm). Middle: transmitted light DIC images. Right: merged images. Reprinted (adapted) with permission from Ref. [15]. Copyright 2020 American Chemical Society.
Recently, in the development of lanthanide-based nanocomposites for cancer therapy, a nanocomposite composed of DOTA as the chelate and camptothecin as the toxic payload (cycLN-ss-CPT, Ln = GdIII or YbIII, Figure 3) has been utilised [17]. In this research, the LnIII ratio was controlled via precise chemical synthesis of the GdIII and YbIII complexes, and upon formation of the micellar LnNP and excitation at 330 nm, the typical YbIII emission spectrum was observed. Incubation of the Gd/YbNPs in HeLa cells confirmed, via NIR optical imaging, that such nanocomposites could be used to monitor uptake. GdIII was included for in vivo MR imaging.

Figure 3. (A) Chemical structure of cycLN-ss-CPT. (B) NIR imaging of YbNPs in HeLa cells; CPT emission λex 370 nm and λem 400–450 nm; Yb(III) emission λex 380 nm and λem 900–1700 nm. Reprinted (adapted) with permission from Ref. [17]. Copyright 2021 American Chemical Society.
Ligand complexes of EuIII and TbIII alone are not able to be used for in vivo optical imaging, as the efficient energy transfer to these lanthanide ions typically requires external excitation in the region of 250−350 nm. Recently, it was communicated that careful design of the complexes can allow for in situ excitation via Cerenkov radiation (CR) (Figure 4). In this example, the administration of radiofluorine (Na18F) with the lanthanide complex allowed for optical and multiplex imaging concurrently [18].

Luminescent iridium complexes, due their excellent photo-stability and high quantum yields, have been utilised as intracellular sensors especially for detection of oxygen, reactive oxygen species (ROS) and other endogenous species [19]. A number of recent NIR-emitting iridium complexes that can be used for in vivo imaging are reproduced in Figure 5. The iridium(III) cyanine complex nanoparticles IrCy-NPs allowed NIR absorption and singlet oxygen generation upon irradiation at 808 nm [20]. The iridium(III) complex-derived polymeric micelle PolyIrLa (the conjugated iridium(III) complex with UNCPs) allowed photodynamic therapy and chemotherapy to occur (NIR irradiation at 980 nm) [21]. The iridium(III) complex IrDAD, containing a donor–acceptor–donor (D-A-D) moiety, allowed for the formulation of a nanoparticulate system (IrDAD-NPs) that can be used for NIR-dual imaging and phototherapy. Tissue penetration was observed and NIR irradiation (808 nm) resulted in the formation of ROS and heat [22]. 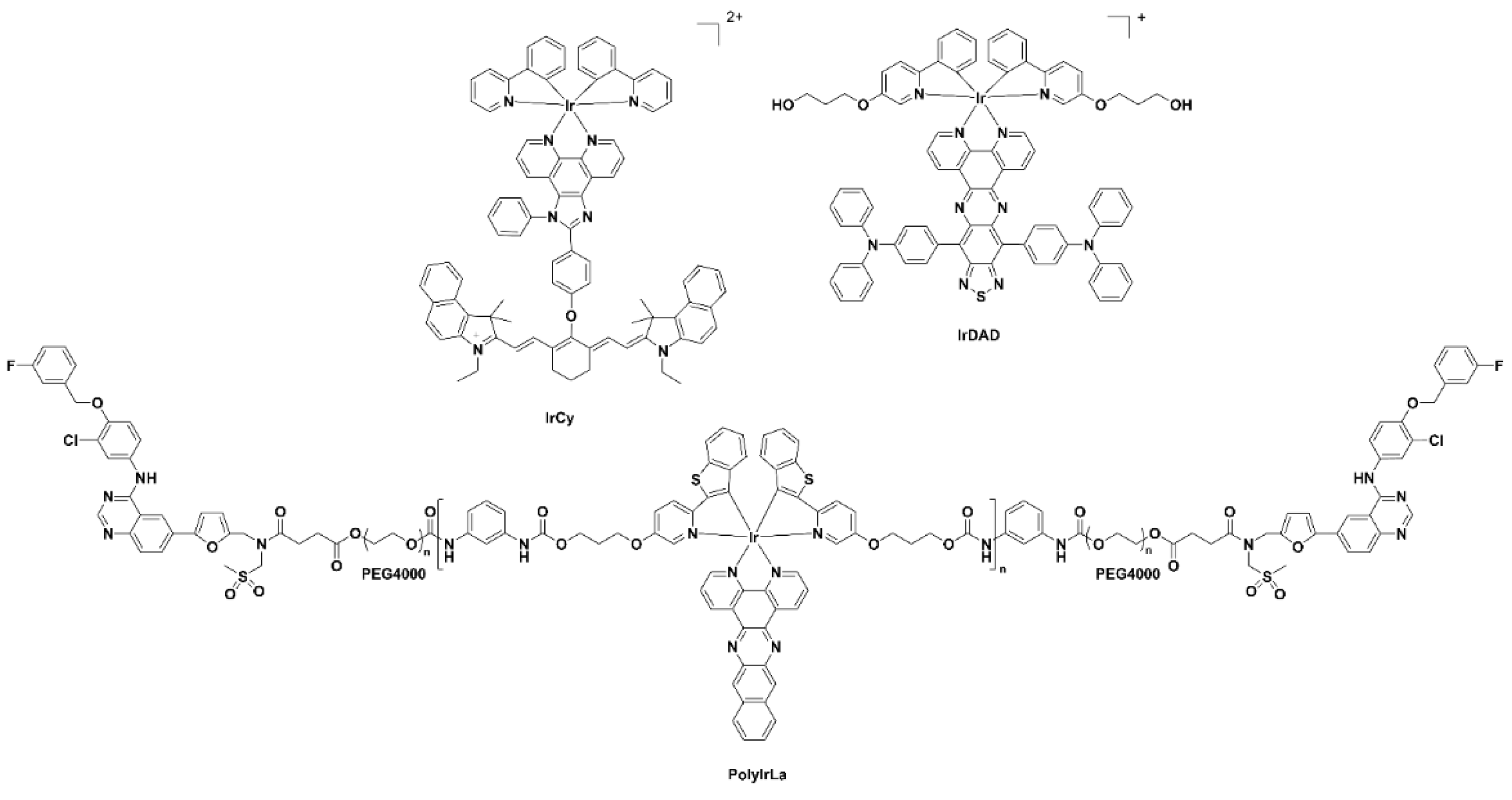 Figure 5. Chemical structures of the iridium(III) complexes IRCY, IRDAD and PolyIRLA.
Typically, ruthenium(III) complexes emit in the visible region and as a result until recently have not been used for imaging studies. The Ru(II) polypyridyl complex, HL-PEG2K (Figure 6), constructed using the D-A-D strategy of an organic NIR-II fluorophore H4–PEG-Glu [23], allowed NIR-II imaging and chemo-photothermal therapy to occur simultaneously. Interestingly, in vivo studies revealed that HL-PEG2K, when compared to cisplatin, had lower toxicity and better activity [24]. 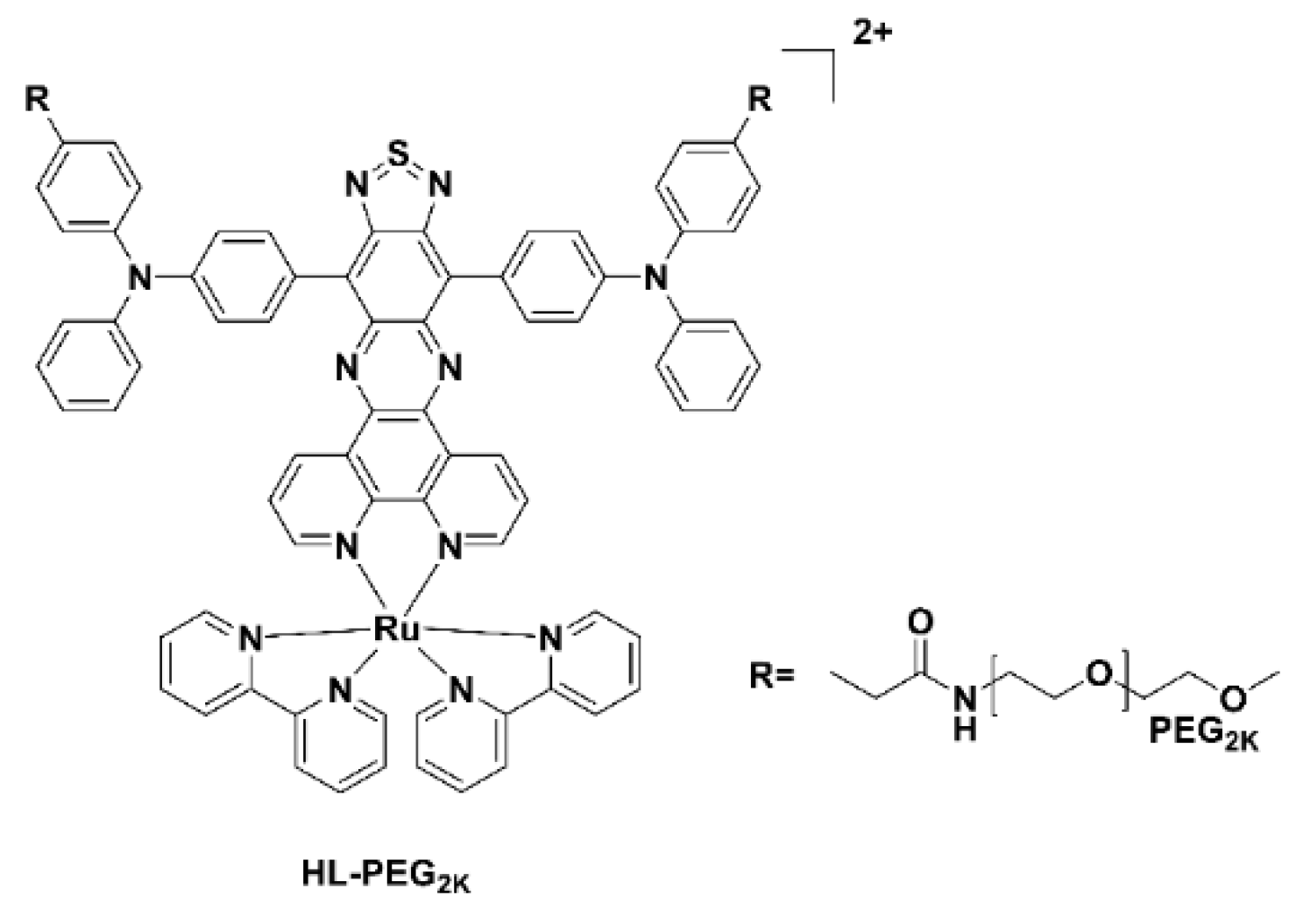