+1 point
Thank you for your contribution! You can also upload a video entry related to this topic through the link below: https://encyclopedia.pub/user/video_add?id=21677
Check Note
2000/2000
Lactoferrin and Ferrous Sulfate Supplementation in Iron-Deficiency Anemia

Ferrous sulfate is a commonly used iron supplement for the correction of iron-deficiency anemia but with frequent gastrointestinal side effects. Milk-derived iron-binding glycoprotein lactoferrin possesses well gastrointestinal tolerance and fewer side effects caused by the intake of high-dose iron. However, the underlying mechanism of the iron-enhancing effect of lactoferrin remains unclear. In addition, the comparative efficacies between lactoferrin and ferrous sulfate are also remained to be determined. Studies support lactoferrin as a superior supplement to ferrous sulfate regarding the improvement in serum iron parameters and hemoglobin levels.

Iron is a necessary trace element for all mammals and involved in many essential metabolic processes such as oxygen transport, mitochondrial respiration and enzymatic activities [1]. Therefore, the deficiency of iron will lead to the metabolic abnormality in all parts of human bodies. The most common manifestations of iron deficiency are fatigue, headache and paleness [2]. Iron deficiency (ID) impairs cardiac function in the elderly and neurocognitive development in infants [1]. Children suffering from severe iron deficiency are associated with cognitive dysplasia, delayed body development, and low productivity [3][4]. The depletion of iron will also restrict hemoglobin synthesis and result in iron-deficiency anemia (IDA) [5][6]. IDA is the unique preventable and theorical easier treatable of the main and more frequent years lived with disabilities (YLDs) in the whole world [7].
Anemia has already become a global public health concern [8]. One in third people worldwide are affected by anemia; pregnant women and children are the most susceptible populations due to the increasing demand of iron for fetus or body development [9]. About half of pregnant women are diagnosed with anemia in low- and middle-income countries [10], and it is estimated that global anemia prevalence is more than 40% in pre-school children [8][11]. Anemia is also the first and main preventable cause of maternal mortality. An analysis of 312,281 pregnancies in 29 countries shows that the odds of maternal death were twice as high in those women with severe anemia compared with those not [12]. According to World Health Organization, 50% of anemia worldwide is caused by iron deficiency. The lack of iron additionally raises the specific risks for the mother and the fetus during pregnancy, such as intra-uterine growth retardation, prematurity, fetoplacental miss ratio and peripartum blood transfusion [13]. Therefore, the reduction of anemia is one of the World Health Assembly Global Nutrition Targets for 2025 and of the Sustainable Development Goals, with the attention to iron supplement and other nutritional needs of adolescent girls, pregnant women and children. However, the global progress in reducing anemia is not on track for reaching the 2025 target [8][14].
Generally, there are 6 “right treatment” guidelines regarding iron supplementation: at the right moment (not only when anemia is present), at the right dose (ensuring efficacy and tolerance of different populations); the right moment (breakfast is not the best meal to intake oral iron considering gastrointestinal reaction); the right route (oral iron is not always the first option, dietetical supplements, fortified powders, delay clamping umbilical cord or intravenous iron administration have respective advantages [4]); the right pharmacology (not all the oral iron are equal, neither the intravenous iron); and the right management (identifying the causes of IDA and the health problem that may weaken the effect of iron supplementation, including obesity/overweight, inflammation, and infection) [15].
There are several approaches for iron supplementation, including dietary or intravenous iron administration. Considering cost-effectiveness and adherence, oral iron ingestion is the main therapy for pregnant women and children with ID or IDA. Oral iron therapies include different iron supplements such as ferrous sulfate, ferrous gluconate and some other iron abundant substances. However, the absorption of iron across intestine epithelium is restricted by ferrous iron ion channel and influenced by body iron needs. Inorganic, non-heme iron from food is absorbed by duodenal enterocytes through divalent metal transporter 1 (DMT1), exported by ferroportin (FPN) and bound by transferrin within blood circulation [16]. The major delivery target of transferrin-bound iron is erythroid in the bone marrow, which can acquire transferrin through transferrin receptor 1 (TfR1) on the erythroid cell surface. Senescent erythrocytes will be lysed by macrophages and iron can be recycled into circulation. Excess iron is stored in the liver as ferritin. High level of iron storage will trigger hepcidin gene (HAMP) transcription to block iron absorption from intestine and iron recycling from macrophages [17]. Hepcidin can bind to FPN, trigger the internalization and degradation of FPN, reducing circulating iron level [18][19]. In addition, hepcidin plays an important role in innate immunity. The expression of hepcidin can be induced by inflammatory cytokines during infection, such as interleukin-6 (IL-6) [20][21], which is regarded to deprive invading microorganisms of iron. During nutrient scarcity, the microbiota can also compete with their hosts for iron by inhibiting host iron transport and storage [22].
Although the regulatory mechanism of iron absorption, utilization, storage and regulation has been discovered, ferrous sulfate is still a very frequently used oral iron supplement for the correction of ID or IDA, sometimes cooperated with vitamin C as adjuvant therapy. However, ferrous iron supplements frequently lead to serious gastrointestinal side effects such as vomiting, nausea, epigastric discomfort and further results in low patients’ compliance [23]. In recent years, milk-derived iron-binding glycoprotein lactoferrin has been used as iron supplement for the correction of ID/IDA [24][25][26]. Lactoferrin shares structural similarities with transferrin [27]. Lactoferrin displays high iron-binding affinity within a wide range of pH values, and the iron-binding capacity can be maintained after heating [1]. In commercially available lactoferrin, lactoferrin attains 10–20% iron saturation. Due to the iron-binding properties, it proposed that lactoferrin can enhance intestinal iron absorption and improve hemoglobin production [1]. However, the underlying mechanism of the iron-enhancing effect of lactoferrin remains unclear. Lactoferrin is a relatively large protein (~80 kD) that is unlikely to cross blood/gut barrier and directly contribute to iron supplementation [28]. Regarding the comparative efficacy between oral lactoferrin and traditional ferrous sulfate therapy on iron absorption, iron storage, erythropoiesis and inflammation, a high-quality comprehensive assessment is still needed to elucidate the potential mechanism of iron-enhancing effect of lactoferrin.

The anti-inflammatory effect of lactoferrin can partially explain why it had a better iron-improving effect even with lower FIA than ferrous sulfate. First, higher inflammatory cytokines will prevent dietary iron absorption and iron mobilization from reticuloendothelial system to meet the need of erythropoiesis because of increased hepcidin synthesis [32][33]. Second, amelioration of inflammation can improve erythropoiesis. Inflammatory cytokines such as IL-6 is a repressive factor for erythropoiesis [34] (Figure 1). Notably, the iron-binding capacity also confers lactoferrin the property of limiting the growth of gut pathogens, which requires iron to proliferate. Simultaneously, lactoferrin can also enhance the growth of gut-beneficial microorganisms such as Bifidobacterium and Lactobacillus [35]. These probiotics have been proven to reduce the adverse effects associated with iron supplementation [36][37]. 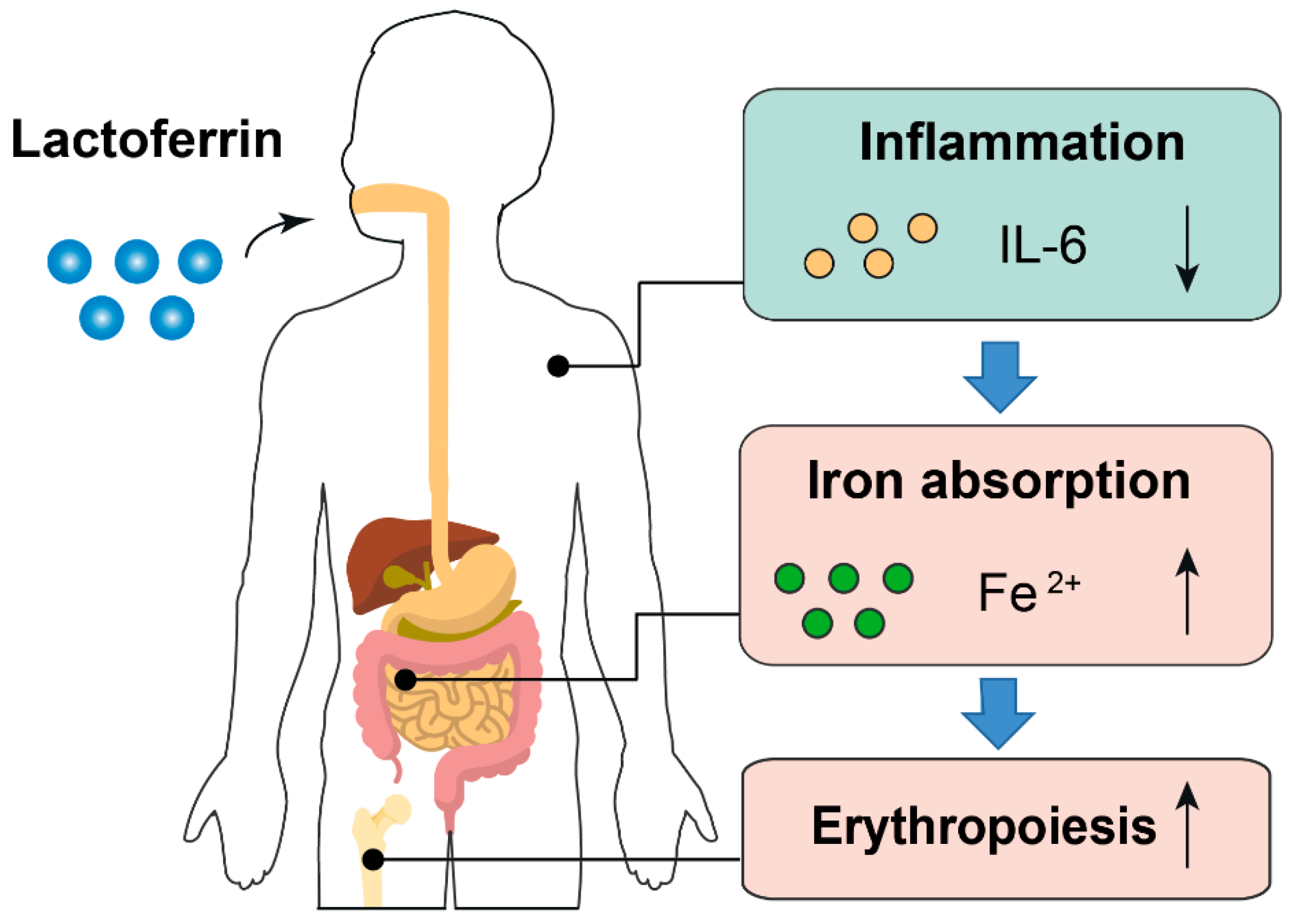 Figure 1. Proposed model describing the iron- and erythropoiesis-improving effects of lactoferrin. Part of the elements in this figure are using resources from Freepik [38] and Servier Medical Art [39] under a Creative Commons Attribution license.
Whether lactoferrin promotes iron status by mitigating inflammation still needs validating in future studies. Inflammatory cytokines such as IL-6, CRP and TNF-α should be detected in further trials. With respect to the lower fractional iron absorption of lactoferrin compared with ferrous sulfate, more iron absorption investigations on lactoferrin are required. A critical serum parameter needs detection in future trials is hepcidin, especially considering the essential function of hepcidin in iron metabolism [40]. Currently, the effect of lactoferrin on hepcidin remains unclear, and the measurement of serum hepcidin will help to explain the modulatory mechanism of lactoferrin on iron absorption. Moreover, the absorption efficiency difference between apo-lactoferrin and holo-lactoferrin may be another aspect for the further exploration of how lactoferrin modulates iron absorption. Iron absorption efficiency can be detected in animals or human volunteers receiving lactoferrin with different iron saturation levels. It may help to understand the interaction between apo-lactoferrin and dietary free iron in the gut, as well as their effects on intestinal iron absorption.
In conclusion, studies support lactoferrin as a superior supplement to ferrous sulfate to improve serum iron, ferritin and hemoglobin levels. Lactoferrin-bound iron is not an iron supplement per se, but immune modulator affecting iron homeostasis via lactoferrin-dependent signal transduction mechanism [9]. The anti-inflammation effect of lactoferrin may be the potential mechanism to explain its efficacy on iron status and erythropoiesis. Further intervention and mechanistic studies are warranted to explore the functions of lactoferrin in the regulation of iron absorption.

More
© Text is available under the terms and conditions of the Creative Commons Attribution (CC BY) license; additional terms may apply. By using this site, you agree to the Terms and Conditions and Privacy Policy.
Upload a video for this entry
Information
Subjects: Food Science & Technology
Contributors MDPI registered users' name will be linked to their SciProfiles pages. To register with us, please refer to https://encyclopedia.pub/register :
Junjie Luo
,
Yongting Luo
,
Peng An
View Times: 529
Revisions: 2 times (View History)
Update Date: 13 Apr 2022
Table of Contents
1000/1000
Hot Most Recent