Submitted Successfully!
Thank you for your contribution! You can also upload a video entry related to this topic through the link below:
https://encyclopedia.pub/user/video_add?id=21511
Check Note
2000/2000
Biological Activities of Rhamnan Sulfate
Edit

Monostroma nitidum is a green single-cell layered algae that grows on the southwest coast of Japan. It is often used for salad ingredients, boiled tsukudani, soups, etc., due to its health benefits. M. nitidum is composed of many cell aggregates, and the various substances that fill the intercellular space are dietary fibers, vitamins, and minerals. Rhamnan sulfate (RS), a sulfated polysaccharide, is main the component of the fiber extracted from M. nitidum. Recently, some biological properties of RS have been demonstrated by in vitro and in vivo studies that probably protect human subjects from viruses and ameliorate vascular dysfunction caused by metabolic disorders, especially lifestyle-related diseases.

Seaweeds have traditionally been consumed by people inhabiting coastal areas in East Asia. Seaweed is rich in vitamins and minerals and is known to have many favorable effects on human health. There are three groups of seaweed, namely green algae, red algae, and brown algae. Green algae contain large amounts of chlorophyll, or green pigments such as those found in terrestrial plants. In contrast, red algae contain, in addition to chlorophyll, plenty of red pigments called phycoerythrin and blue pigments called phycocyanin, giving them a red or purple color [1][2]. Brown algae contain, in addition to chlorophyll, red–brown pigments called fucoxanthin and take on a yellowish brown or blackish brown color. The green alga Monostroma nitidum is often confused with a species of sea lettuces (Ulva Linnaeus). However, M. nitidum and sea lettuce belong to a different order in biological classification. Many species in the group of sea lettuces have a double layer of cells, whereas M. nitidum have a single layer of cell assemblies (Figure 1a,b) [3]. The Japanese name of M. nitidum Hitoegusa is derived from the fact that the leaf-like tissue is composed of a single layer of cells. M. nitidum thallus consists of many cell aggregates (Figure 1c), separated with mucilage rich in dietary fiber, vitamins, minerals, lipids, and peptides [3].

Figure 1. (a) Monostroma nitidum; (b) longitudinal section of the tissue, which is composed of a single layer of cells; (c) tissue consists of many cell aggregates; bar indicates 20 μm.
M. nitidum grows wild in shallow waters along the Pacific coast of Japan (Kii Peninsula, Kyushu, and Nansei Islands), Korean Peninsula, and Southern China. In Japan, seaweed farming is also being practiced in the southwest coastal areas of Mie, Kumamoto, Kagoshima, Nagasaki, and Okinawa prefectures. It is particularly popular in Matoya Bay, Ago Bay, Ise Bay, and Gokasho Bay in Mie Prefecture, accounting for about 70% of the total production in Japan. M. nitidum is a health-promoting food that contains dietary fibers consisting of polysaccharides, minerals, and proteins, and it has been used extensively for nori boiled in soy sauce, miso soups, and salads.

Cell walls of M. nitidum contain a large amount of rhamnan sulfate (RS), a sulfated polysaccharide [4][5]. Although this macromolecule is poorly soluble in water, it can be solubilized and decomposed into smaller molecules by treating M. nitidum with hot water. The obtained extract is purified by anion-exchange resin column chromatography; sulfated substances bind to the column and are subsequently eluted from the column by increasing the concentration of sodium chloride. This method produces a highly purified RS [5]. Figure 2a shows hot water extract from the intercellular substance of M. nitidum, and Figure 2b shows highly purified RS from M. nitidum.

Figure 2. (a) Hot-water extract from intercellular substance of M. nitidum; (b) highly purified rhamnan sulfate from M. nitidum.
Purified RS is a macromolecular polysaccharide with a molecular weight of tens of thousands to millions. It consists of a polysaccharide with long linear chain structures of α-1,3-linked l-rhamnose connected with α-1,2-linked branched chains, to which several sulfate groups bind (Figure 3) [6][7]; sulfate groups account for about 25% of M. nitidum-derived RS [8]. 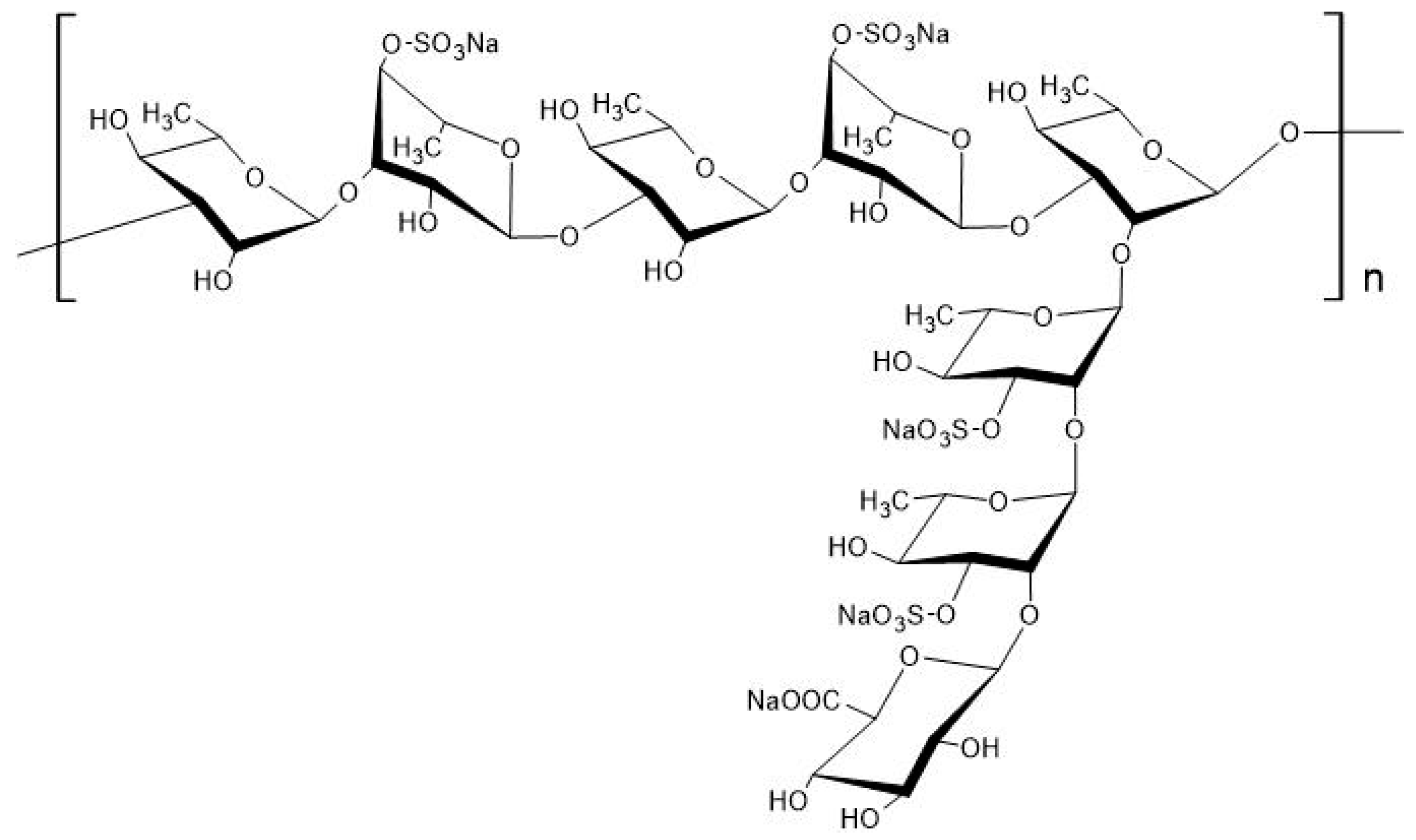 Medical researchers have hitherto developed various antiviral medications, including acyclovir, an inhibitor of DNA synthesis used as a medication for herpes simplex virus type 1 and type 2, which cause strong inflammatory responses in the skin, mouth, lips (herpes labialis), eyes, and sex organs, and another medication called oseltamivir, a neuraminidase inhibitor of the influenza virus. However, shortly after their commercialization, these antiviral medications were met with the emergence of drug-resistant viruses, posing a major challenge. It is known that, because these antiviral agents specifically inhibit enzymes of the viruses, they are more likely to induce mutations in the viral DNA or RNA. To overcome this problem, researchers sought to identify and analyze novel substances with antiviral properties that are extracted from naturally derived substances. RS was the outcome of one of those studies [9].
In vitro analysis of the antiviral effect of RS revealed that RS showed suppressing effects on human immunodeficiency virus (HIV), human cytomegalovirus (HCMV), and herpes simplex virus types 1 and 2 (HSV-I and -II) [6][9][10]. Recently, Terasawa et al. showed that RS has an antiviral effect on enveloped viruses, such as measles virus, mump virus, influenza A virus, and human corona virus, but does not affect non-enveloped viruses, such as adenovirus, poliovirus, coxsackie virus, and rhinovirus. Evaluation of the in vitro anti-influenza A virus activity of RS showed that it inhibited both virus adsorption and entry steps to Madin-Darby canine kidney (MDCK) cells [13].
Wang, et al. have shown that intramuscular injection of RS into enterovirus-infected mice significantly improves their survival rate, and RS directly binds to viruses and thereby prevents viral absorption to tissue cells [12], suggesting that it can exert antiviral effects in vivo. Terasawa et al. also showed that oral administration of RS in influenza A virus–infected mice suppressed viral proliferation and weight loss and stimulated neutralizing antibody production in vivo. RS inhibited virus adsorption to the host cells. RS probably binds to the influenza virus hemagglutinin (HA), which is a glycoprotein on the viral envelope and important for host cell binding. Both antiviral and immune stimulating activities of RS may contribute to the suppression of viral proliferation in vivo [13].

3.2. Anti-Obesity and Anti-Hypercholesterolemic Effects of RS

Seaweed contains large amounts of dietary fibers and is reported to lower serum cholesterol levels and neutral fats through carrageenan [27]. Accordingly, to clarify whether the extracted RS, a soluble fiber, is effective for treating obesity and obesity-related diseases, including hepatic steatosis, diabetes, and hyperlipidemia, the zebrafish was used to assess and examine its effects. The zebrafish is a model organism that has been used in recent years to identify and assess drug candidate agents for vertebrates. When zebrafish were rendered obese after being fed a high-fat diet, they doubled their weight compared to normal feeding in four weeks. When switching to a diet containing RS, the weight gain of these obese zebrafish was significantly attenuated [25]. RS also significantly (p < 0.05) mitigated the elevation of serum LDL cholesterol induced by a high-fat diet and prevented fat accumulation in the liver. The gene expression analysis showed that RS mainly inhibits lipogenesis. These results suggest that RS has anti-obesity effects. The researchers conducted a clinical trial on 16 adult males with high cholesterol levels [24]. Their serum cholesterol levels were determined after the study subjects took RS every day for six weeks. As a result, there was no change in serum HDL cholesterol level, but LDL cholesterol level in the RS-treated group was significantly (p < 0.05) reduced compared with that of the group not taking RS. These results suggest that RS keeps the LDL/HDL cholesterol ratio low and prevents lifestyle-related diseases such as obesity and hyperlipidemia.

Risk factors for the development of thrombosis include aging, various environmental factors, clinical conditions, and stress. Thrombosis is a clinical condition that occurs when a pathological thrombus develops in the blood vessel. Platelet aggregation, blood clotting, and vascular endothelial inflammation are alleged to be three major factors closely related to thrombus formation in blood vessels (Virchow’s triad for thrombosis) (Figure 4) [30][31]. Rudolf K. Virchow in 1856 proposed that there are three essential factors contributing to the formation of arterial and venous thrombosis. They are pathological changes in (1) blood flow, such as abnormal increase and decrease of shear stress; (2) blood components, such as abnormal activation of platelets, blood coagulation, and fibrinolysis factors; and (3) vessel wall, such as abnormal vascular endothelial inflammation. Even today, these three factors are important in understanding the formation of arterial and venous thrombosis, and in developing medicines to treat and prevent thrombotic disorders [32][33]. 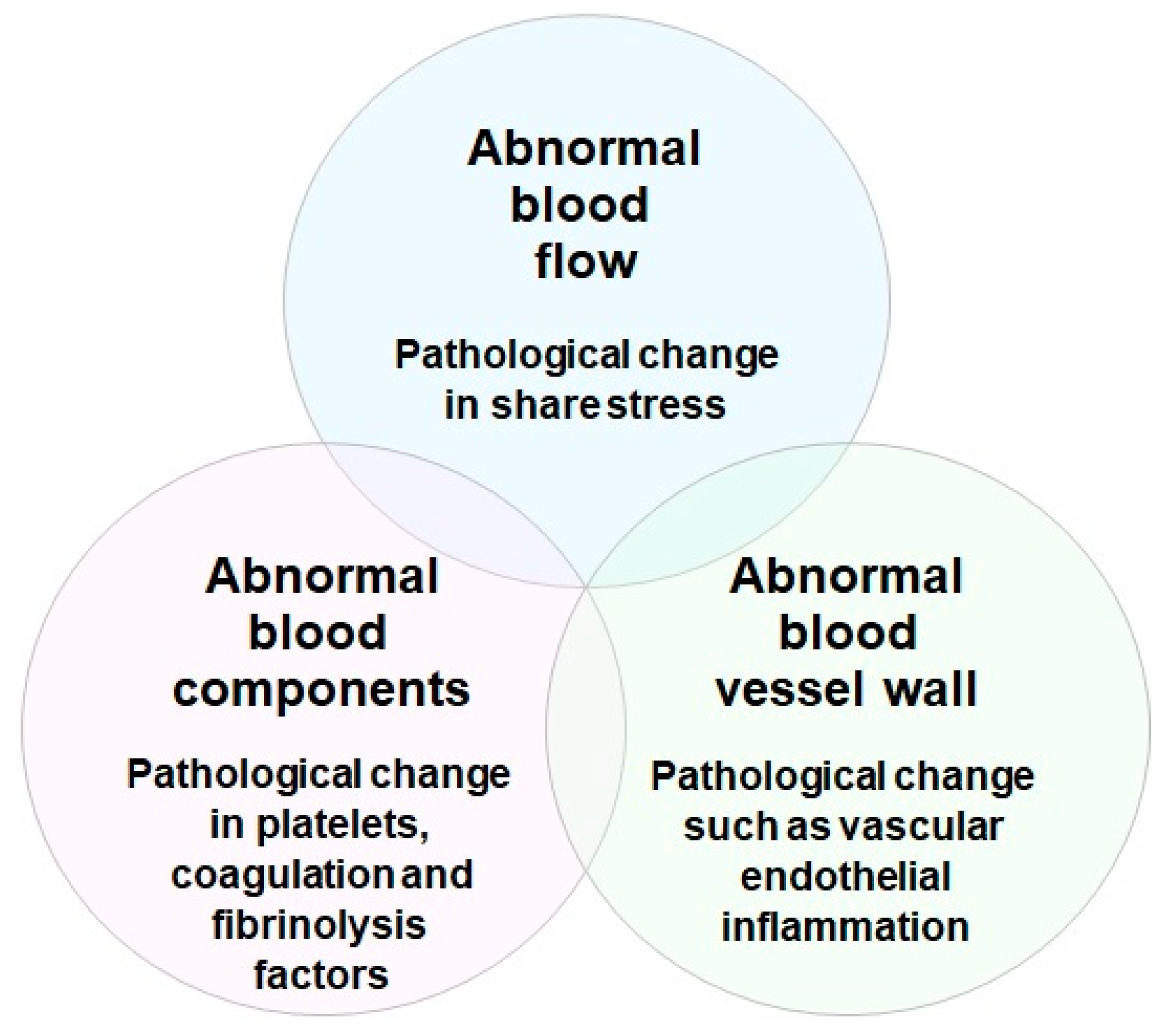 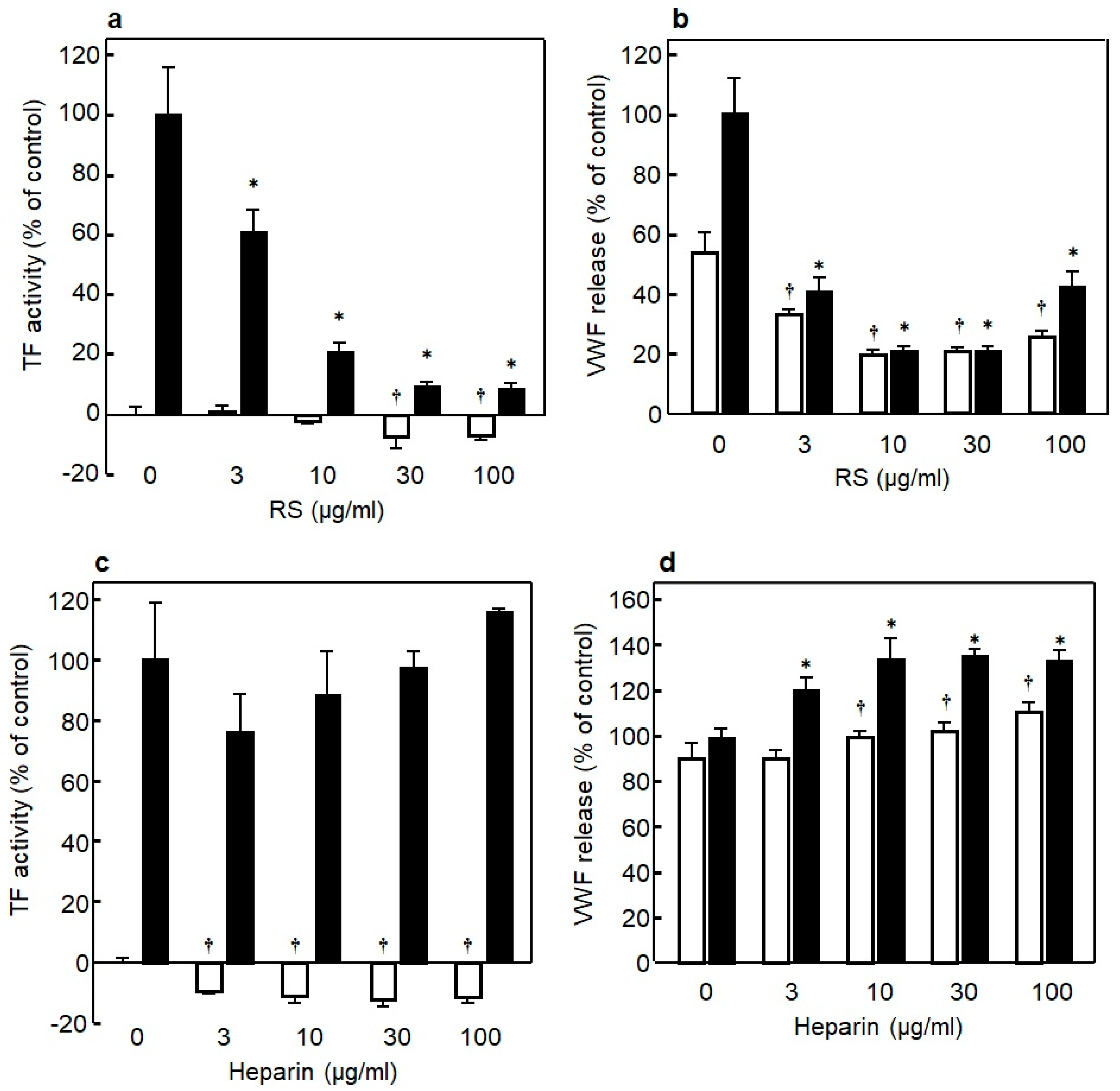