+1 point
Thank you for your contribution! You can also upload a video entry related to this topic through the link below: https://encyclopedia.pub/user/video_add?id=21498
Check Note
2000/2000
Hydrogen Sulfide as a Regulator of Autophagy

The term “autophagy”, (from the Greek words auto, meaning “self” and phagein, meaning “to eat”)—literally, eating one’s self—was first created by Christian de Duve over 40 years ago, who discovered lysosomes and provided clear proof of their participation in this process. It is an evolutionarily conserved process of degradation and recycling in eukaryotic organisms. H2S is already considered a physiological mediator involved in many physiological and pathological processes in animals and plants, including autophagy.

The term “autophagy”, (from the Greek words auto, meaning “self” and phagein, meaning “to eat”)—literally, eating one’s self—was first created by Christian de Duve over 40 years ago, who discovered lysosomes and provided clear proof of their participation in this process [1]. It is an evolutionarily conserved process of degradation and recycling in eukaryotic organisms. Two common forms of autophagy have been described in mammals and plants: micro-autophagy and macro-autophagy, while they differ in a third type of autophagy described, chaperone-mediated autophagy (in mammals) and mega-autophagy (in plants) [2][3][4][5][6]. The differences among them have been previously described in detail elsewhere [7][8]. In this latest process, the cytoplasm and/or organelles are isolated in double membrane vesicles—named autophagosomes—and then transported to the lytic organelle (vacuole in plants and yeast, and lysosome in animals) to be degraded, resulting in the turnover of cellular components. Therefore, autophagy is a fundamental cell clearance pathway that eliminates cellular components, including nucleic acids, proteins, lipids, and organelles, to promote homeostasis, differentiation, development and cell survival.
Autophagy is a unique membrane trafficking process that involves the de novo formation of a membrane, which is generally derived from the endoplasmic reticulum (ER) by generating a double membrane structure called phagophore that elongates to sequester cytoplasmic cargo and closes to form the autophagosome [6][9].
The molecular process of autophagy was mostly unknown until 1993, when Yoshinori Oshumi described a genetic screen in yeast, leading to the discovery of AuTophagy-related Genes (ATG) [10]. 41 yeast ATG genes have been described, and many of them have orthologues in other organisms such as humans and plants.
The autophagy core process in mammals is induced in response to stress by inhibiting the mammalian kinase target of rapamycin (mTOR) or activating 5’ AMP-activated protein kinase (AMPK). In mammals, different stress stimuli can trigger autophagy, such as protein misfolding, hypoxia, nutritional and energy deficiency, ER stress, redox stress, mitochondrial damage, and pathogen infection [11]. Dysregulated autophagy plays an important role in many pathological processes, including ischemia-reperfusion injury, inflammatory and infectious diseases, obesity and type 2 diabetes, cancer and neurodegenerative diseases [12][13][14].
In plants, inhibition of TOR, usually induced by starvation of nutrients such as nitrogen starvation, is the main pathway that triggers autophagy. In addition, it can also be regulated by repression of glucose signaling, activating the energy sensor Snf1-related protein kinase 1 (SnRK1), which in turn inhibits TOR and activates the ATG1 autophagy initiation complex. The function of AMPK in plant autophagy remains largely unknown, although a plant ortholog of mammalian AMPK, named KIN10, was described as a positive regulator of plant autophagy [15]. In plant cells, autophagy is triggered by different biotic and abiotic stresses such as oxidative stress, salinity, hypoxia, heat and cold, nutrient starvation, ER stress and pathogen infection. Therefore, autophagy is essential for plants during reproductive and vegetative development, senescence, starvation, immune response and it is critical to cope with environmental stress [3][16][17]. Thus, autophagy must be tightly regulated to maintain cellular homeostasis.
Hydrogen sulfide (H2S) is a colorless, flammable and highly toxic gas known for its rotten egg scent at low concentrations. It has always been considered a toxic pollutant that is found naturally in sewers, stagnant or well waters, compost pits, gas wells and volcanoes. However, it is also endogenously produced in cells by different enzymes.
H2S is produced in animals by cystathionine β synthase (CBS, EC 4.2.1.22), cystathionine-γ-lyase (CSE, EC 4.4.1.1) and 3-mercaptopyruvate sulfurtransferase (3-MST, EC 2.8.1.2); these use cysteine or 3-mercaptopyruvate as substrates. The sulfate-reducing bacterial flora in the large intestine of animals also releases H2S, reaching concentrations from 0.3 to 3.4 mmol L−1 in the colon [18][19].
In Arabidopsis, the plant species where the H2S signaling has been deeply studied, H2S is produced from cysteine by the action of L-cysteine desulfhydrases (DES1, EC 4.4.1.2; and L-CDES, EC 4.4.1.1), D-cysteine desulfhydrases (D-CDES, EC 4.4.1.15), cyanoalanine synthase (CAS, EC 4.4.1.9), cysteine synthase (CS, EC 4.2.99.8), NifS-like proteins and in the photosynthetic sulfate assimilation pathway by sulfite reductase (SiR, EC 1.8.7.1) [20].
Over the last decade, both in animal and plant systems, H2S has been highlighted as a biological signaling molecule—namely, gasotransmitter—as important as other signal molecules such as nitric oxide (NO), carbon monoxide (CO) or hydrogen peroxide (H2O2) [21][22][23].
H2S is already considered a physiological mediator involved in many physiological and pathological processes in animals and plants. Its regulatory function in mammals includes processes such as reducing inflammation [24], synaptic transmission [25], apoptosis [26], vascular tone [27], ischemia-reperfusion injury [28] and promoting ulcer healing [29] and protects cells from oxidative stress [30]. In plants, H2S regulates a wide range of physiological processes, from seed germination to fruit maturation and the first description of its influence on vegetative development and disease resistance of plants dates from the late 1960s [31][32]. Today, the protective effects of H2S against different stresses are widely known, such as drought [33], osmotic and saline stresses [34], heat [35], oxidative stress [36] and metal stresses [37]. In addition, H2S regulates photosynthesis [38], stomatal closure/aperture [39][40] and autophagy [41][42][43][44][45][46][47].

2. Hydrogen Sulfide as a Regulator of Autophagy

2.1. The Anti-Autophagic Role of Sulfide in Plants

Over the last 10 years, there have been many studies on the effects of H2S on autophagy in eukaryotic cells, but its mechanism has not been completely deciphered.
In plants, the role of H2S in autophagy has been described as a protective effect towards a prosurvival outcome. By now, H2S has been revealed as a negative regulator of autophagy induced by nutrient deficiency, carbon and nitrogen deprivation [41][43] and osmotic [46] and ER stress [45] (Figure 1). It was shown that only sulfide donor molecules, and no other compounds containing inorganic sulfur, are responsible for the inhibition of autophagy under nitrogen starvation in Arabidopsis roots [43]. Besides, sulfide signaling was dose-dependent, with an optimal NaHS (commonly used as sulfide generating molecule) concentration of 100–200 µM, with devastating effects at higher concentrations, inducing autophagy, probably due to its toxicity. 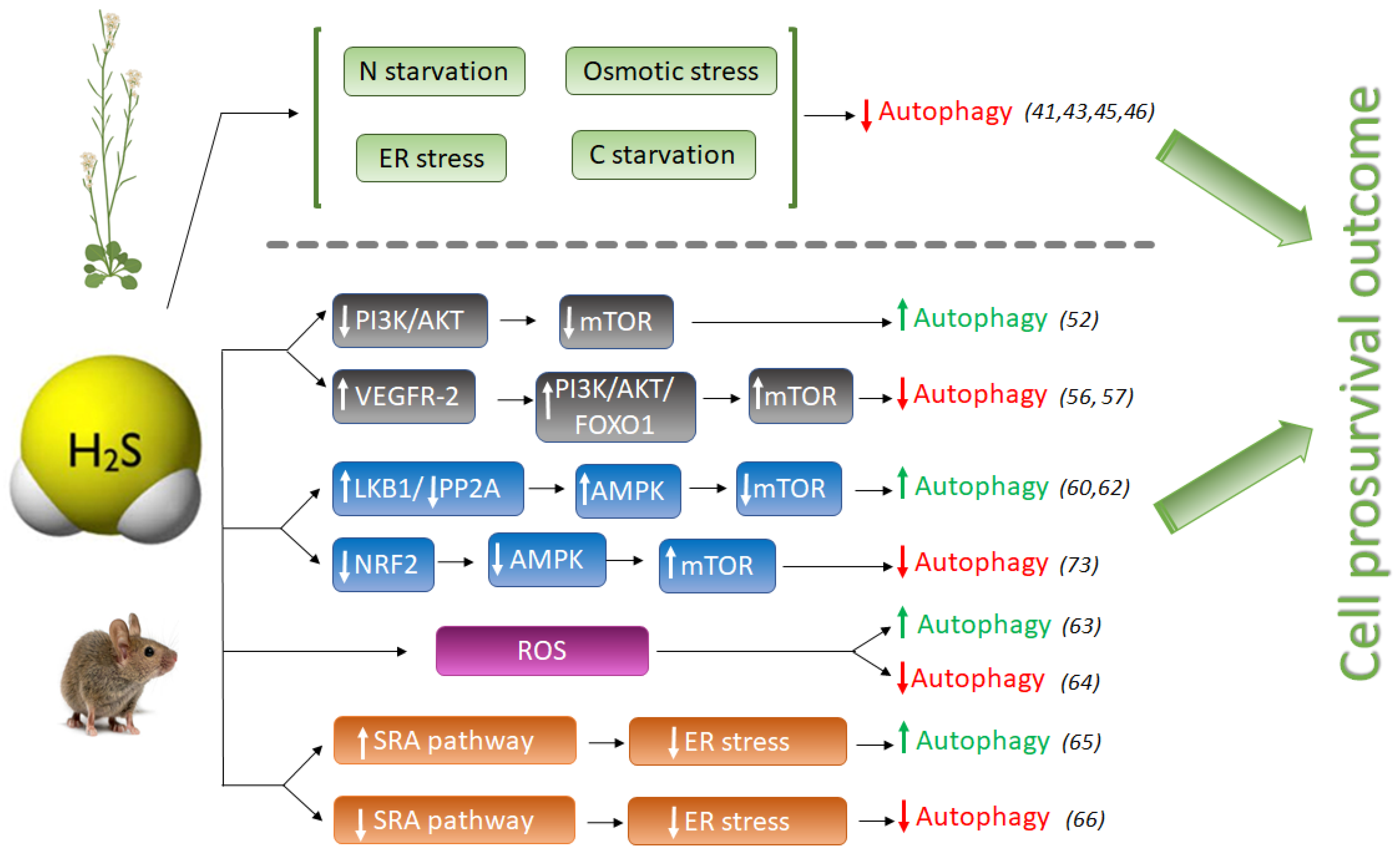 Figure 1. Schematic comparison of pro-autophagic and anti-autophagic effect of H2S signaling in animal and plant systems. H2S, hydrogen sulfide; LKB1, liver kinase B1; PP2A, Protein phosphatase 2; AMPK, adenosine monophosphate-activated protein kinase; mTOR, mammalian target of rapamycin; NRF2, Nuclear factor E2-related factor 2; Akt (PKB), protein kinase B; PI3K, phosphatidylinositol 3-kinase; FOXO1, Forkhead Box O1; VEGFR-2, Vascular endothelial growth factor receptor 2; SRA, Scavenger receptor A. Numbers between brackets refer to references cited.
The induction of autophagy by oxidative stress, especially during nutrient deprivation, and the ability of H2S to activate the antioxidant response of plant cells, are well known. However, it was nicely shown that the negative regulation of autophagy through sulfide signaling was not dependent on its antioxidant activity, showing that hydrogen sulfide does not behave as an H2O2 or superoxide scavenger [43]. Furthermore, treatments with identical concentrations of antioxidant molecules such as glutathione and ascorbate were unable to produce the negative effect that sulfide treatment had on autophagy regulation; only NaHS treatment significantly inhibited autophagy [43].
Hydrogen sulfide has also been revealed to play a key role in autophagy during ER stress. Aggregation of misfolded proteins in the endoplasmic reticulum disrupts ER function, producing ER stress [48], which interferes with normal physiological functions of the cell. ER stress occurs when an increase of misfolded proteins accumulate in the ER which may be activated by different adverse environmental conditions such as cold or heat and pathogen infections in plants [49], or by several chemical and physiological situations such as glucose deprivation, hypoxia or genome instability in animals [50].
In a recent study, the effect of sulfide was also demonstrated to be independent from the antioxidant activity under ER stress, comparing the results observed using similar concentrations of sulfide, glutathione and ascorbate. Their results showed that when ER stress was induced with tunicamycin, no significant decrease in autophagosomes was detected upon well-established antioxidant compounds. By contrast, sulfide provoked a severe decrease of autophagosomes, indicating that the negative effect of sulfide is independent of redox conditions [45].
The anti-autophagic role of sulfide in Arabidopsis was also demonstrated under induced autophagy by carbon starvation, where Cys-generated sulfide in the cytosol was shown to regulate negatively autophagy and to modulate the transcriptional profile of Arabidopsis [41]. DES1, the L-Cys desulfhydrase protein located in the cytosol, catalyzes the desulfuration of L-Cys to sulfide plus ammonia and pyruvate. Consequently, the null mutant des1-1 plants contain 30% less endogenous sulfide in leaves than WT plants. Mutant des1-1 plants were shown to have induced autophagy under physiological conditions, and exogenous treatment with NaHS negatively regulated autophagy in this mutant background [41]. Moreover, sulfide was able to suppress autophagy induction caused by carbon starvation even in wild-type plants, whereas exogenous ammonia, also a product of DES1 activity, had no effect on carbon-induced autophagy. Therefore, it was concluded that sulfide exerts a general effect on autophagy unrelated to nutrition limitation stress.
In a different study sought to decipher the mechanism of action by which NaHS regulates autophagy, it was shown that abscisic acid (ABA) treatment induced the autophagic flux and that this induction was also repressed by NaHS [46]. One of the first plant responses to adverse environmental conditions is the increase of intracellular ABA content in order to activate downstream ABA-signaling pathway so as to help plants cope with the stress. In this situation, when plants successfully have overcome the adverse conditions and induced autophagy is not more required, NaHS repression prevents the over-activation of autophagy allowing to return back to levels in favorable growth conditions [44]. Therefore, in all studies reported up to now in plant systems, sulfide has an anti-autophagic role (Figure 1).

2.2. The Pro- or Anti-Autophagic Role of Sulfide in Mammals

More
© Text is available under the terms and conditions of the Creative Commons Attribution (CC BY) license; additional terms may apply. By using this site, you agree to the Terms and Conditions and Privacy Policy.
Upload a video for this entry
Information
Subjects: Biochemistry & Molecular Biology
Contributors MDPI registered users' name will be linked to their SciProfiles pages. To register with us, please refer to https://encyclopedia.pub/register :
Angeles Aroca
,
Cecilia Gotor
,
Jeachul Jang
View Times: 130
Revisions: 2 times (View History)
Update Date: 11 Apr 2022
Table of Contents
1000/1000
Hot Most Recent