Submitted Successfully!
Thank you for your contribution! You can also upload a video entry related to this topic through the link below:
https://encyclopedia.pub/user/video_add?id=2126
Check Note
2000/2000
Psilocybin
Edit
Upload a video
This entry is adapted from 10.3390/biomedicines8090331

Psilocybin, a psychoactive alkaloid contained in hallucinogenic mushrooms, is nowadays given a lot of attention in the scientific community as a research tool for modeling psychosis as well as due to its potential therapeutic effects. Psilocybin was marketed by Sandoz as Indocybin for basic psychopharmacological and therapeutic clinical research, rising in popularity during the 1960s and classified as a Schedule I drug in 1970.

Psilocybin is a naturally occurring tryptamine known for its psychedelic properties. Recent research indicates that psilocybin may constitute a valid approach to treat depression and anxiety associated to life-threatening diseases. 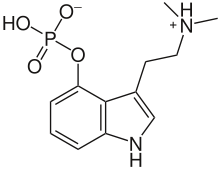 Depression and anxiety are independent risk factors of early death in patients with life-threatening diseases, like cancer [1] and most of these individuals develop a chronic syndrome of psychological distress, usually associated with decreased treatment adherence, prolonged hospitalization, decreased quality of life and increased suicidality [2]. Antidepressants and benzodiazepines are used to treat depressed mood and anxiety in patients with life-threatening diseases [3], although there are no Food and Drug Administration (FDA) approved pharmacotherapies for the psychological distress related to those diseases. In addition, the onset of clinical improvement with antidepressants is delayed, relapse rates are high and significant side effects compromise adherence to therapy [4].

Regarding the treatment of severe depression and anxiety, special attention should be paid to the approval of intranasal Spravato® by the FDA in March 2019. Its active compound is esketamine, a ketamine enantiomer, which is a non-competitive N-methyl-d-aspartate (NMDA) glutamate receptor antagonist. The effects of ketamine have made it a popular recreational drug, due to its euphoric and dissociative properties [5]. Nonetheless, esketamine appears to provide significant short-term symptom improvement in severe depression and anxiety and it is considered an innovative and promising therapeutic approach. Moreover, molecules such as 3,4-methylenedioxy-methamphetamine (MDMA) and lysergic acid diethylamide (LSD) are also being studied for the treatment of anxiety conditions, namely, post-traumatic stress disorder (PTSD) and generalized anxiety disorder (GAD). Nevertheless, none of these drugs has been approved by the FDA.

In spite of all studies and therapeutic innovations in this area, further research is needed, notably on classic hallucinogens like psilocybin, to provide patients with depression and anxiety associated with life-threatening diseases better chances of recovery and consequently better quality of life.

Recently, Goldberg et al., 2020 [6] published a meta-analysis concerning the use of psilocybin and symptoms of anxiety and depression. The approach used in their meta-analysis is different from the one we present in several aspects, for instance—it does not include data on previous pathologies of the patients receiving psilocybin and did not analyze physiological effects induced by the drug. Also, the authors did not examine psilocybin dose and administration duration as moderators of treatment effects [6].

In this context, this paper aims to perform a systematic review, complying with the Preferred Reported Items for Systematic Reviews and Meta-Analysis (PRISMA) statement, followed by a meta-analysis of clinical trials on the therapeutic potential of psilocybin in anxiety and depression associated with life-threatening diseases.

2. Primary Outcomes: Effects of Psilocybin on Depression and Anxiety

BDI and STAI were considered the psychometric scales for this work since they are the most widely used in clinical settings to quantify symptoms of either depression or anxiety.

The meta-analysis results for the effects of psilocybin in depression through BDI are graphically reported in Figure 1A and Table 1. For BDI, 11 effect sizes were considered, including 92 patients, with a diagnosis of depression and anxiety associated with a life-threatening disease. It was concluded that the intervention group was significantly favored when compared to the control group (WMD = −4.589; 95% CI = −4.207 to −0.971; p-value = 0.002). For these results, a fixed effects model was used, given the homogeneity of the studies (I2 = 0%). 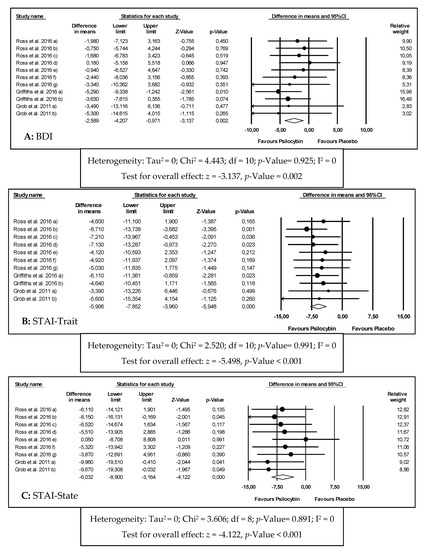 Figure 1. Forest plots of comparisons of the effects of psilocybin on the primary outcomes of this meta-analysis ((A) Beck Depression Inventory (BDI); (B) State-Trait Anxiety Inventory (STAI)-Trait; (C) STAI-State).

Table 1. Effects of psilocybin on depression and anxiety.

The meta-analysis results for the effects of psilocybin in anxiety through STAI-Trait and STAI-State are graphically reported in Figure 1B,C, respectively and Table 1.

For STAI-Trait, 11 effect sizes were considered, including 92 patients, with a diagnosis of depression and anxiety associated with a life-threatening disease. Among these, 28 patients had genitourinary cancer, 26 had breast cancer, 16 had digestive cancer, 12 had hematologic malignancies and 10 had other oncologic pathologies. All patients were in advanced stages of their illnesses and some had recurrent metastatic diseases. Apart from that, all patients had also been diagnosed using the DSM V meeting criteria for either chronic adjustment disorder with anxiety, chronic adjustment disorder with mixed anxiety and depressed mood, dysthymic disorder, GAD, MDD or dual diagnosis between GAD and MDD or GAD and dysthymic disorder.

For STAI-State, 9 effect sizes were considered, including 41 patients, with a diagnosis of depression and anxiety associated with a life-threatening disease (oncologic conditions). For this outcome, it was concluded that the intervention group was significantly favored when compared to the control group (WMD = −6.032; 95% CI = −8.900 to −3.164; p-value ˂ 0.001). For these results, a fixed effects model was used, given the homogeneity between studies (I2 = 0%).

Psilocybin is a molecule with structural similarities to serotonin, an endogenous neurotransmitter. It can be found in some mushrooms and has been widely used to induce hallucinations and altered states of consciousness. Its laboratory synthesis was performed by Albert Hofmann while working at Sandoz Laboratories and it was marketed later under the commercial name Indocybin® for basic psychopharmacology and clinical research [7].

Nonetheless, it was withdrawn in the early 1970s and was classified as a Schedule I drug due to its use outside of medical research and in association with emerging counterculture. Despite withdrawal and criminalization, its potential therapeutic value led many scientists to study the effects and mechanisms of action of the drug. There is preliminary evidence that psilocybin may be useful in the treatment of anxiety and depression in life-threatening diseases, depression, obsessive-compulsive disorder, alcoholism and nicotine addiction, cluster headaches and autism [7]. Although further research is needed to assess the efficacy and safety in the treatment of these conditions, it should be noted that psilocybin is illegal in most countries. Therefore, the illegal status of psilocybin adds complexity and some costs to clinical trials involving its administration to human subjects.

The mechanism of action of psilocybin in depression is still unknown. However, some research suggests that its therapeutic effects in depression may reflect the deactivation of the medial prefrontal cortex (mPFC) that is usually hyperactive in depressed patients [8].

The deactivation of mPFC by psilocybin is detected using functional magnetic resonance imaging (fMRI) and it is correlated with the subjective effects induced by the drug. Other studies with fMRI support that psilocybin attenuates amygdala activation on response to threat-related visual stimuli [9]. This may be one of the mechanisms underlying the therapeutic effectiveness of psilocybin in depression and anxiety, given that the amygdala is extremely important in perception and generation of emotions and amygdala hyperactivity in response to negative stimuli is correlated to negative mood states in depressed patients [10]. Furthermore, the mechanism of action of psilocybin, an agonist of 5-HT(2A) receptors, indicates other evidence of its action in depression, since cortical 5-HT(2A) receptor expression is usually increased in postmortem samples of depressed and suicidal patients [11].

Patients with a potentially life-threatening disease often experience considerable anxiety and psychological distress, depression, anger, loss of perceived self-worth, social isolation, hopelessness, and helplessness [12]. There is no FDA approved pharmacotherapy for psychological distress related with life-threatening diseases and conventional therapy often shows limited efficacy to address symptoms of anxiety and depression. The obtained results in the present work emphasize the importance of psilocybin translational research, when used in the correct environment and with trained professionals and may give clues to future clinical trials.

Psilocybin produces sustained reduction in symptoms of both depression and anxiety. However, a recommendation for its use could only be given under rigorous definition of the conditions and precautions. The efficacy of psychedelic therapy may, unlike conventional pharmacotherapy, be linked to an experiential and meaningful process, responsible for the long-term effects and positive effects in cognition, affect, behavior and spirituality [13]. After psilocybin administration, patients report alleviation from anxiety, reconciliation with death, emotional uncoupling from cancer, spiritual or religious phenomena, reconnection to life and greater confidence [14]. The activation of serotonin receptors 5-HT(2A) mediates perception, attention, and emotional regulation, influencing the waking consciousness, sensory experiences, affectivity, experience of self and dream-like visual imagery [13]. Psilocybin is, therefore, responsible for inducing a profound shift in consciousness, with intensification of affective responses, enhanced ability for introspection, regression to primitive and childlike thinking and activation of vivid memory traces with pronounced emotional processes [15].

The persistence in time of the positive effects of psilocybin suggests that the acute destabilization of brain networks induced by the drug modifies activity in a long-lasting way [16]. Psilocybin may alter acutely brain network activity, decreasing connectivity within the default mode network (DMN) [8]. DMN has a role in consciousness and high-level constructs, such as the self, being essential for the maintenance of cognitive integration and constraint under normal conditions [17].

The increases of both SBP and DBP and heart rate are consistent with the sympathetic effects of psilocybin reported in the literature [18]. The sympathetic effects may also be noticeable through the induction of pupil dilatation [19]. Psilocybin, however, is not likely to cause changes on electrocardiograph or body temperature nor to affect the ionic balance, blood glucose or cholesterol [13].

There were not reported serious adverse effects following psilocybin administration. Besides transient moderate increases in SBD, DBP and heart rate, there are some references to nausea, both physical and psychological discomfort, transient episodes of psychological distress and anxiety. There are, however, no cases of hallucinogen persisting perception disorder (HPPD) neither prolonged psychosis, although literature points these effects to be quite dangerous and life-impairing following hallucinogen consumption [20]. This may occur because in all studies included in the present meta-analysis, patients were carefully monitored in a calm and relaxed environment and had been previously informed about the effects that the drug might have in their bodies and mind. This is known as “set and setting” and it is designed to facilitate a mystical experience and to increase the probability of a positive outcome after the administration of any hallucinogen [7]. In fact, many drug-related and not drug-related variables may influence the adverse effects experienced by patients, namely, age, gender, education, experimental setting, and drug dose [21].

According to the literature, besides the mentioned adverse effects, psilocybin may also cause somatic symptoms such as dizziness, weakness, tremor, drowsiness, yawning, paresthesia, blurred vision, and increased tendon reflexes [22]. Although not applicable to the studies included in this meta-analysis, psilocybin is very likely to induce nausea when consumed through psilocybin-containing mushrooms [23].

Classical hallucinogens are not likely to cause addiction, as it is mainly linked to the dopaminergic system, while classical hallucinogens act mostly on the serotoninergic system. Furthermore, these drugs lead to tachyphylaxis, the rapid decrease in the effect of a drug in consecutive doses, related to their mechanism of action. Thus, the development of addiction by patients after treatment with psilocybin is not of concern. However, authors suggest that if a psilocybin-containing medicines is approved, it should be included in the Schedule IV of Controlled Substance Schedules [24].

More
© Text is available under the terms and conditions of the Creative Commons Attribution (CC BY) license; additional terms may apply. By using this site, you agree to the Terms and Conditions and Privacy Policy.
Upload a video for this entry
Information
Subjects: Psychiatry
Contributor MDPI registered users' name will be linked to their SciProfiles pages. To register with us, please refer to https://encyclopedia.pub/register :
Ângelo Luís
View Times: 268
Revisions: 2 times (View History)
Update Time: 23 Sep 2020
Table of Contents
1000/1000
Hot Most Recent