+1 point
Thank you for your contribution! You can also upload a video entry related to this topic through the link below: https://encyclopedia.pub/user/video_add?id=21231
Check Note
2000/2000
Poly-L-Lactic Acid as a Biomaterial

Synthetic biopolymers are effective cues to replace damaged tissue in the tissue engineering (TE) field, both for in vitro and in vivo application. Among them, poly-l-lactic acid (PLLA) has been highlighted as a biomaterial with tunable mechanical properties and biodegradability that allows for the fabrication of porous scaffolds with different micro/nanostructures via various approaches. Tissue engineering applications of biomaterials have widely focused on studying synthetic polymers due to their interesting mechanical strength, elasticity, and biodegradability.

PLLA is a homopolymer of the PLA family, which also includes the homopolymer PDLA and the copolymer PDLLA (Figure 1) [1]. The attractive properties of this family have motivated researchers to focus their study on these polymers owing to their non-toxicity and excellent physical and mechanical properties [2]. Based on its compositional and structural properties, PLA is a thermoplastic aliphatic polyester. It may include stereochemical forms that give specific properties to materials. For instance, PLLA and PDLA are semicrystalline polymers, whereas PDLLA is usually amorphous [3].

Figure 1. Enantiomeric forms of lactic acid [1].
PLLA represents most PLA commercial grades. They are eco-friendly polymers obtained from 100% natural resources, such as cornstarch and sugar cane [4]. Its environmental advantage is linked both to the synthesis from non-petroleum-based processes (i.e., fermentation processes of oils, carbohydrates, or plants) [5] and the possibility of using eco-sustainable catalysts, such as cerium trichloride heptahydrate [6] and sorbitol [7]. PLLA production presents the advantage of lower energy use and, subsequently, lower costs [8]. PLLA is constituted by the cyclic dimer lactide LL- and has a crystalline structure between 30 and 40% [9] that can have several forms (α, α’, β, and γ); the α form is the most stable owing to its pseudo-orthorhombic unit cell, with the (10/3) chain adopting a helical conformation [4]. As a result, there is no symmetry on each side, leading to a distortion of the chain packing in the crystal lattice and energetical stability to the arranged chains [8].

PLLA is an FDA-approved polymer known for its low toxicity compared to other synthetic polymers [1]. The anti-infective effects of PLLA had been established during in vivo and in vitro experiments, facilitating the repair of the infected tissue [5][10]. One of the significant advantages of PLLA with respect to other biopolymers relies on the performance of PLLA during implantation ensuring adequate mechanical properties for prolonged regenerative processes [11]. However, researchers have advised some doubts about the hydrophobic surface of this polymer that might compromise its biocompatibility since it affects the amount of absorbed proteins and the cell adhesion [12][13][14].
Another crucial parameter that must be taken into account when determining the biological properties of one material is its biodegradation by-products that can cause local or systemic toxicity after implantation [11][15]. During PLLA degradation via hydrolysis, the polymer forms lactic acid as a by-product, typically present in the body and excreted as water and carbon dioxide [1]. The optimal degradation rate of a 3D support should match that of the ECM deposition of a specific tissue [16]. The kinetics of PLLA degradation depends on its crystallinity, strain, and microstructure that follows its deployment [17]. Lower crystallinity and higher strains lead to a faster degradation rate. PLLA is described as a resorbable synthetic polymer with slow degradation kinetics. This feature is given by the extra methyl group, leading to increased hydrophobicity and stability against hydrolysis [18]. The degradation time of PLLA is about 40 and 30 weeks in vitro [19] and in vivo [20], respectively.

3. Mechanical and Physical Properties of PLLA

PLLA is widely explored in tissue engineering applications because it is characterized by tunable mechanical properties [21]. Scaffolds fabricated from this bioresorbable material usually exhibit higher tensile strength (60–70 MPa) and modulus (2–4 Gpa) but lower elongation at break (2–6%) compared to other synthetic polymers, such as PCL and PDLA [18]. High-strength tissues, such as bone [13], ligaments [22], and dermis [23], have been extensively investigated by PLLA-based scaffolds to provide physical support during tissue healing. However, the mechanical behavior of PLLA strongly depends on its molecular weight, crystallinity, and aging characteristics [24].
PLLA is a thermoplastic polymer with thermal plasticity and transparency [25]. The latter depends crucially on the crystal morphologies and crystallinity [26]. PLLA has a melting temperature (Tm) between 170 and 180 °C and a glass transition temperature (Tg) of about 60 °C. Tm may vary due to impurities [4]. Moreover, it is characterized by a mechanical strength of about 4.8 GPa, depending on its molecular weight [3][1]. Due to its polyorthoester trait, PLLA presents a hydrophobic nature allowing it to degrade while remaining structurally intact [27]. Thermal degradation strongly reduces the length of PLLA chains, leading to a decrease in the molecular weight and structural stability under thermal and mechanical stresses [28]. The α-crystalline form of PLLA is the most thermodynamically stable owing to the C=O dipoles that are randomly oriented along the main chain, resulting in a non-polar form [29].

Reinforcement additives that modify a polymeric material can act as a trigger for material degradation and can improve mechanical properties [4][30]. Reinforced PLLA structures offer a potential advantage to improve scaffold properties. Mariano et al. [10] obtained and characterized a PLLA-based nancomposite reinforced with cellulose nanocrystals. According to their results, the presence of the filler increased the resistance of the melt flow and the Young’s modulus value. Similarly, Mg(OH)2 was used to improve the mechanical properties of PLLA-based composites [25]. Another material that can be added to obtain high-performance PLLA-based material is BaTiO3, which is specifically used to give piezoelectric properties to the polyester [31]. Figure 2 shows the global and microscopic structure of PLLA fibers reinforced with BaTiO3 particles fabricated by Oh et al.

Figure 2. (d) Obtained as-spun PLLA fiber reinforced with BaTiO3 particles by the pilot-scale melt-spinning, and (e) FE-SEM image of the as-spun PLLA/BaTiO3 fibers.
Other additives have also been used to improve cell proliferation and protein absorption. Among them, chitosan [14] and hydroxyapatite [30] have been shown to enhance the osteoactivity of PLLA-based constructs. Moreover, PLLA was found to be itself a reinforcer for other materials. Natural polymers often used in the tissue engineering field lack good mechanical properties. Collagen and gelatin sponges [32] and silk fibers [33] resulted in higher strength and elastic modulus when reinforced with PLLA.

Due to its relatively low biodegradation rate, PLLA is a suitable candidate for a prolonged drug delivery system [34]. In this regard, Sasaki et al. [35] developed a new drug-carrier material as blend particles composed of PLLA and rifampicin, an antibiotic drug used as an antibacterial and antifungal agent. The freeze-drying technique was used to prepare blend particles, starting from a solution composed of PLLA, rifampicin, and 1,4- dioxane. To avoid the heterogeneous adsorption method, the authors considered rifampicin suitable for their study because it is soluble in 1,4-dioxane, as well as PLLA. The obtained particles had an average porosity of 92 ± 3% and a specific surface area of 10–40 m2 g−1 (Figure 3). 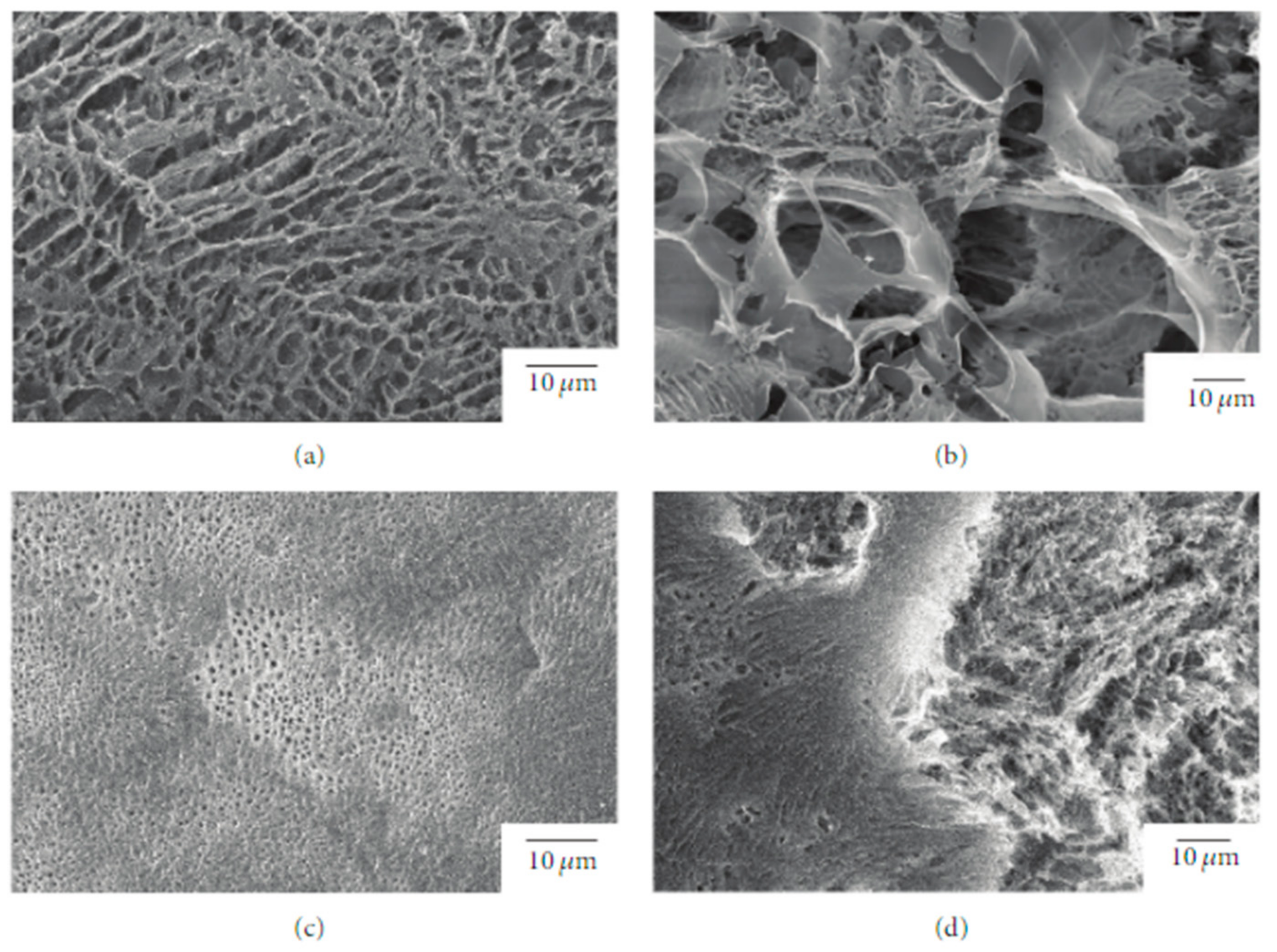 Figure 3. SEM images of the surface and interior of PLLA/rifampicin blend particles prepared by the drop freeze-drying method. (a) PLLA = 2.0 wt%, surface, (b) PLLA = 2.0 wt%, interior, (c) PLLA = 4.9 wt%, surface, and (d) PLLA = 4.9 wt%, interior.
The release kinetics of rifampicin in water were studied, resulting dependent on the morphology of the mixture particles that can be tuned by changing the concentration of the original solution and the freezing processing parameters.
Cao et al. evaluated the ability of the PLLA/polyhydroxybutyrate (PHB) for drug release [36]. They prepared the scaffold using solvent-free melt electrospinning and different concentrations of the drug dipyridamole (DPD). The authors found that DPD acts as a plasticizer for PLLA, thus allowing them to carry out the melting electrospinning process at a lower temperature if compared to neat PLLA. From their findings, the fibers containing DPD showed a rougher surface and nonuniform diameters within a single fiber than the fibers without DPD. The release profile of DPD was studied at different PLLA/PHB ratios (9/1 and 7/3) with the same drug concentration (1%), showing that the 9:1 PLLA/PHB system was more resistant to polymer hydrolysis than the 7:3 one. In line with this result, the rate of diffusion transport was approximately two times higher for the 7:3 PLLA/PHB fibers than for the 9:1 PLLA/PHB fibers. Overall, the authors proved the ability of this hybrid system to enhance sustained drug release.
In a more recent study, Guidotti et al. [37] developed a novel A-B-A triblock copolymer, based on PLLA as the A block, to prepare micro and nanoparticles for controlled drug delivery. Block B was a poly(butylene/triethylene succinate) P(BSTES) copolymer system in which the hydrophilic/hydrophobic ratio and hydrolytic degradation kinetics were adjusted for an adequate release of the drug by controlling the block length. To investigate the application of these new materials for manufacturing micro and nanoparticles for controlled drug delivery, the effect of both chemical structure and molecular architecture as well as of particles size was evaluated on drug release kinetics. Specifically, the authors loaded the micro and nanoparticles with dexamethasone, a synthetic corticosteroid with rapid gastrointestinal absorption. From their results, after observing the drug release from the copolymer and pure PLLA after 8 h of incubation under physiological conditions, the drug release from the copolymers was complete, while that from the PLLA matrix still continued, although more than 80% of the drug had already been released during incubation. The authors suggested that, in copolymer microparticles, the drug was released through a diffusion-controlled mechanism. Instead, the release of the drug from the PLLA microparticles was also affected by the erosion process that occurs in the subsequent phases.
In the TE field, growth factors (GF) are a fundamental element since they have the potency to induce and enhance cellular responses [38][39]. According to Shen et al. [40], tissue regeneration with only cells and scaffolds is often unsuccessful, and exogenous growth factors must be in place to initiate the regeneration process. In this context, PLLA-base scaffolds incorporating growth factors were proposed to improve their biological activity and induce cell differentiation [41][39][42][43]. Yin et al. [44] fabricated silk fibroin/poly (L-lactide-e-caprolactone) (SF/PLLA-CL) vascular graft loaded with platelet-rich growth factor (PRGF) by the electrospinning technique. PRGF was incorporated to promote effective smooth muscle cell (SMC) growth and infiltration into the graft. From their findings, SF/PLLA-CL/PRGF possessed a slightly higher strain (282%) and lower elastic modulus (1.8 MPa) than SF/PLLA-CL (259% and 2.5 MP, respectively), showing appropriate mechanical properties compared to native blood vessels. Concerning the cellular behavior, PRGF enhanced cellular infiltration into the graft to a profound extent and induced fast SMC growth (Figure 4). 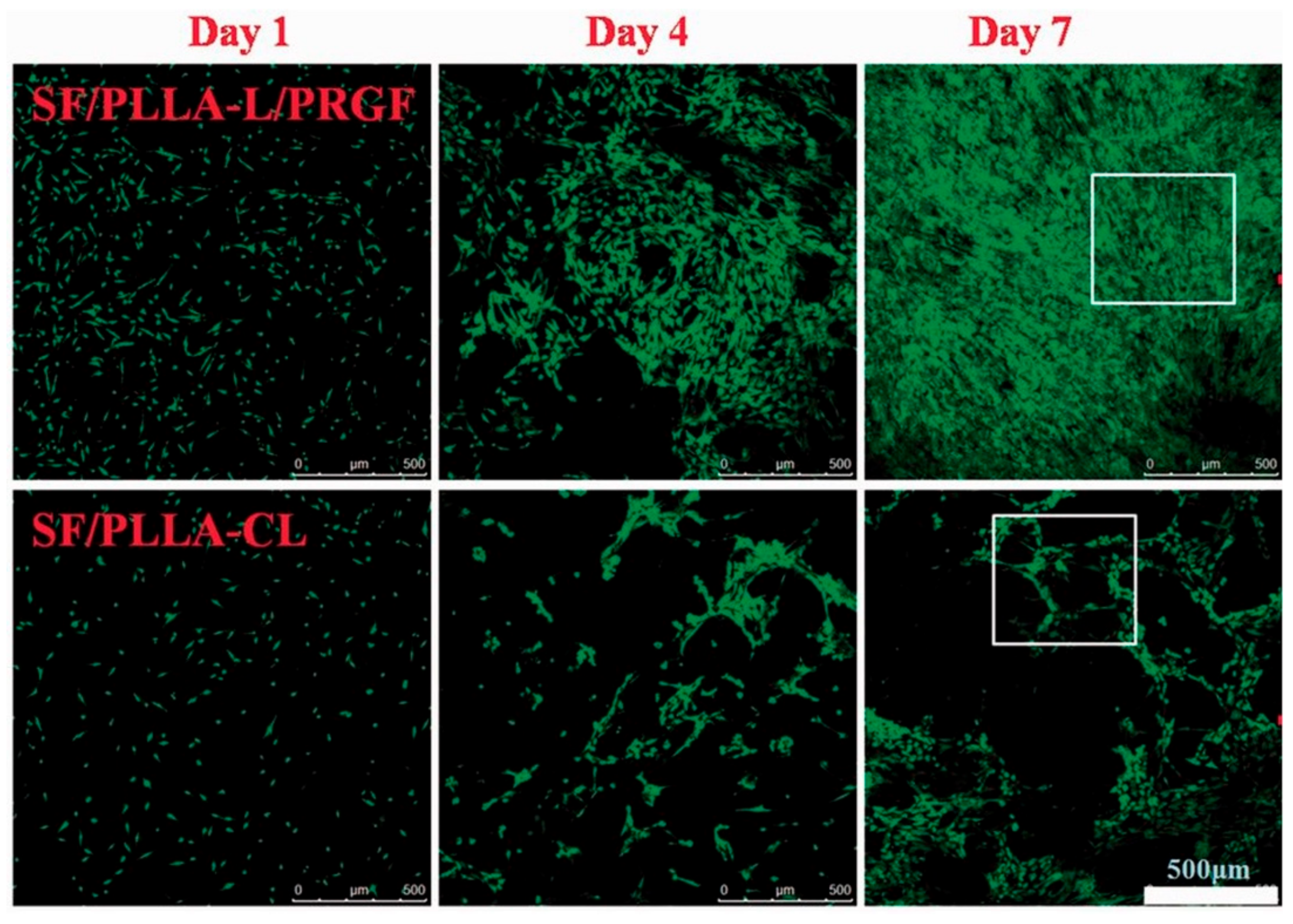 Figure 4. Confocal laser images of SMCs grown on SF/PLLA-CL/PRGF and SF/PLLA-CL for 1, 4, and 7 days.
In cartilage and bone TE, Zhang et al. [45] introduced poly(hydroxyethyl) methacrylate (PHEMA) blocks to conjugate GF-mimicking peptides on PLLA scaffold surface and fabricate a scaffold with improved bioactivity. Two different GF-mimicking peptides were separately conjugated, i.e., TGF-β1 and BMP-2 for inducing chondrogenic and osteogenic differentiation of BMSCs, respectively. These peptides were introduced into the PLLA scaffold after adjusting the density of acrylic groups in the copolymers during the molecular synthesis to conjugate more peptides. Based on the reported in vitro and in vivo tests, incorporating GF-mimicking peptides in PLLA–PHEMA scaffolds actively directed the stem cells along their respective differentiation pathways. They also promoted cartilage and mineralization compared to the control unconjugated scaffolds.

More
© Text is available under the terms and conditions of the Creative Commons Attribution (CC BY) license; additional terms may apply. By using this site, you agree to the Terms and Conditions and Privacy Policy.
Upload a video for this entry
Information
Subjects: Engineering, Biomedical
Contributors MDPI registered users' name will be linked to their SciProfiles pages. To register with us, please refer to https://encyclopedia.pub/register :
Francesco Lopresti
,
Vincenzo La Carrubba
View Times: 204
Revisions: 2 times (View History)
Update Date: 01 Apr 2022
Table of Contents
1000/1000
Hot Most Recent