Submitted Successfully!
Thank you for your contribution! You can also upload a video entry related to this topic through the link below:
https://encyclopedia.pub/user/video_add?id=2099
Check Note
2000/2000
Gastrointestinal Cancer
Edit
Upload a video
This entry is adapted from 10.3390/ijms21186555

Gastrointestinal (GI) cancer is a heterogeneous cancer that tends to occur in the more common sporadic forms rather than the rare inherited forms. The process of initiation and formation of neoplastic cells in the GI tract can be classified into four main mechanisms: (i) inherited transmission of mutations; (ii) exposure to different carcinogens; (iii) chronic inflammatory conditions/microbial dysbiosis; and (iv) sporadic mutations and epigenetic changes.

Hereditary GI cancers represent a phenotypically diverse group of diseases involving malignant tumors of the digestive tract, extra-GI cancers, and benign abnormalities characterized by inherited genetic mutations transmitted from parent to child. However, no more than 3%–5% of GI cancers have shown a clear hereditary basis [1]. The esophagus, stomach, colon, small intestine, and pancreas have been identified as the organs most likely to inherit germline mutations [2]. The best known inherited malignant tumors are associated with the GI tract, representing monogenic hereditary diseases that result from mutations in a single gene [3]. Despite the specific differences in the genes involved, inherited GI cancers share a common set of characteristics: (i) the majority of GI cancers are detectable in the early stages of life; (ii) these cancers follow an autosomal dominant inheritance mechanism in which the neoplasm occurs in 1st degree relatives; and (iii) the formation of multiple tumors [3][4]. In the hereditary form of GI cancers, the first genetic mutation in one of the alleles of a predisposition gene is acquired at the time of conception, and the somatic mutation of the second allele is then acquired via environmental insult, lifestyle practices or other exogenous factors (Figure 1). Once the two alleles of a specific predisposition gene are mutated, gene function is completely inactivated, leading to carcinogenesis. Compared to the sporadic form of GI cancer, which requires two somatic events during the inactivation of the predisposition gene, hereditary cancers present a higher risk because they need only one somatic mutation event, which explains the early onset of hereditary cancers [5]. In parallel with the advancement of DNA technologies, the genetic mutations responsible for hereditary GI cancers have been widely documented (Table 1). These hereditary GI cancers include Cowden syndrome, MUTYH-associated polyposis, hereditary pancreatic cancer, Lynch syndrome, Peutz-Jeghers syndrome, familial adenomatous polyposis (FAP), attenuated FAP, serrated polyposis syndrome, and hereditary gastric cancer. Cancer-causing mutations can be initiated in three main classes of predisposition genes, oncogenes, tumor suppressor genes, and DNA repair genes, which are involved in establishing genetic stability. 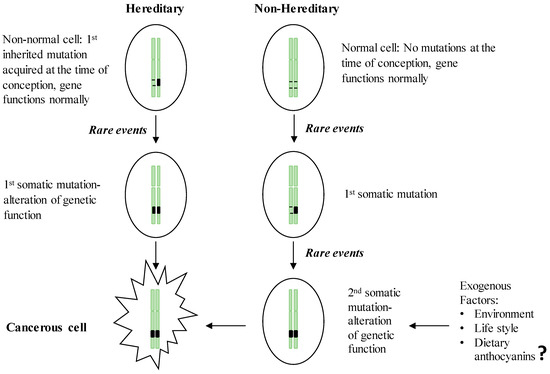 Figure 1. Two-hit theory of the initiation of hereditary and non-hereditary cancer. People with a hereditary susceptibility to GI cancers harbor an inherited genetic mutation on one of the chromosomes at the time of conception and receive the 1st somatic mutation due to the endogenous (e.g., chronic inflammation) or exogenous (e.g., exposure to carcinogens) rare events which in turn inactivate the full function of the respective gene and initiate neoplastic transformation. Non-inherited forms of GI cancer occur by acquiring two somatic mutations in later life, resulting in the inactivation of a gene leading to the initiation of malignancy.

Accumulations of sporadic mutations can occur due to factors such as exposure to carcinogens [2], a westernized diet [19][20], diets rich in salt [21][22], obesity [23][24], chronic alcohol consumption [25][26], and chronic inflammation [27]. The relationships between carcinogens, diet, inflammation, and GI cancers are multiple and complex. Exposure to carcinogens can initiate cancer development via somatic mutations that include point mutations, deletions, additions, and modified methylation of DNA [28]. There are several cellular mechanisms to protect DNA from carcinogen-induced mutations and to identify and correct these mutations before they give rise to malignancy. In spite of these protective mechanisms, the GI tract is continuously exposed to chemical and biological carcinogens, often due to diets that act as carriers of preformed carcinogens [2]. Among known carcinogens, tobacco smoke hydrocarbons are one of the most potent, being comprised of more than 60 mutagens and cancer-causing chemicals directly linked to esophageal [28], pancreatic [29], and gastric cancers [30][31]. In addition, exposure to airborne occupational carcinogens such as cement dust, quartz dust, and diesel exhaust fumes increases the risk of gastric cancer [32]. Nitrosamines, which are produced from the chemical reaction between nitrates or, in reduced form, nitrites with amines present in meat products during the meat preservation process, are another group of potent carcinogens associated with the increased risk of malignancy in the liver and GI tract due to DNA alkylation and DNA adduct formation [33]. Among biological carcinogens, aflatoxin B1 is one of the most influential hepatocarcinogens produced by the Aspergillus flavis fungi. Due to its lipophilic nature, aflatoxin B1 is readily absorbed from the GI tract. Aflatoxin B1, upon its metabolism by cytochrome P450 in the liver, induces irreversible mutations in the p53 gene of hepatocytes [34][35]. Fumonisin B1 is another mycotoxin that can cause hepatic and esophageal cancers [36]. Fumonisin B1 acts in part by upregulating the production of inflammatory cytokines by gastric and colon epithelial cells [37].

GI tract carcinogenesis is attributed to chronic inflammatory conditions that occur due to microbial, viral, or disease conditions such as inflammatory bowel disease (IBD). Regarding microbial inflammation, Helicobacter pylori infection is well documented as a trigger for GI cancers. Exposure to H. pylori initiates active chronic gastritis by increasing the infiltration of inflammatory cells, which leads to the formation of intestinal adenocarcinoma and other malignant tumors of the GI tract [38]. In addition, hepatitis B and C virus infection, gastroesophageal reflux, enzyme damage, autoimmune diseases such as ulcerative colitis, and systemic stress conditions are responsible for chronic GI inflammation [2]. Clinical studies show that patients with IBD have a significantly higher risk of developing colorectal cancer, especially 8 to 10 years after the diagnosis of IBD [39]. The mechanisms underlining the link between inflammation and GI cancers are varied and include the production of high levels of reactive oxygen species (ROS) and reactive nitrogen intermediates (RNI) [40]. The macrophages that dominate the chronic inflammatory microenvironment produce increased levels of ROS and RNI, which in turn interact with the DNA of proliferating epithelial cells and generate permanent genetic mutations leading to the malignant transformation. Excessive ROS/RNI production during the process of oxidative metabolism has been reported to promote the synthesis and secretion of inflammation-promoting cytokines such as tumor necrosis factor (TNF)-α, interferon-gamma (IFN-γ), and interleukin (IL)-6 [41][42]. Moreover, other inflammatory mediators such as chemokines, growth factors, and eicosanoids in tumor microenvironments contribute to inflammation-triggered tumor progression and metastasis via modulating the immune response, inhibiting apoptosis, inducing cell proliferation, and promoting the accumulation of oncogenic mutations [43].

Diet, personal lifestyle, and the environment are all linked to the development of GI cancers. Chronic excessive caloric intake and physical inactivity leading to overweight and obesity-derived metabolic dysfunction are essential risk factors of GI carcinogenesis [23][24]. Energy imbalance causes alterations in glycemic control, insulin signaling, and upregulation of adipose tissue-derived inflammatory pathways that prolong carcinogenesis-promoting conditions [44]. Chronic alcohol consumption also increases susceptibility to GI cancers [45]. Acetaldehyde, the primary metabolite of alcohol, has recently been targeted for its involvement in ethanol-linked oxidative stress and the inhibition of DNA methylation by interfering with the metabolism of B vitamins, reducing the activity of methionine synthase and glutathione levels [46], and disrupting retinoid metabolism [45]. Depletion of systemic and tissue-specific retinoic acid levels are associated with possible malignant transformation; thus, chronic alcohol consumption reduces hepatic vitamin A and retinoic acid levels, which are strongly related to the later development of hepatocellular carcinoma (HCC) via decreasing mitogen-activated protein kinase (MAPK) and increasing levels of phosphorylated c-Jun N-terminal kinases (JNKs) [45]. Moreover, in vivo evidence reveals that high-fat and high-salt diets alter the permeability and growth of the colonic mucus layer, which in turn, leads to intestinal microbial dysbiosis that is linked with an increased incidence of GI cancer [47]. Colonic microbial imbalance resulting from prolonged consumption of westernized diets enhances the breakdown and metabolism of specific glycans in the mucus layer, leading to GI carcinogenesis [48].

More
© Text is available under the terms and conditions of the Creative Commons Attribution (CC BY) license; additional terms may apply. By using this site, you agree to the Terms and Conditions and Privacy Policy.
Upload a video for this entry
Information
Subjects: Others ; Oncology
Contributor MDPI registered users' name will be linked to their SciProfiles pages. To register with us, please refer to https://encyclopedia.pub/register :
H.P. Vasantha Rupasinghe
View Times: 235
Revisions: 3 times (View History)
Update Time: 26 Oct 2020
Table of Contents
1000/1000
Hot Most Recent